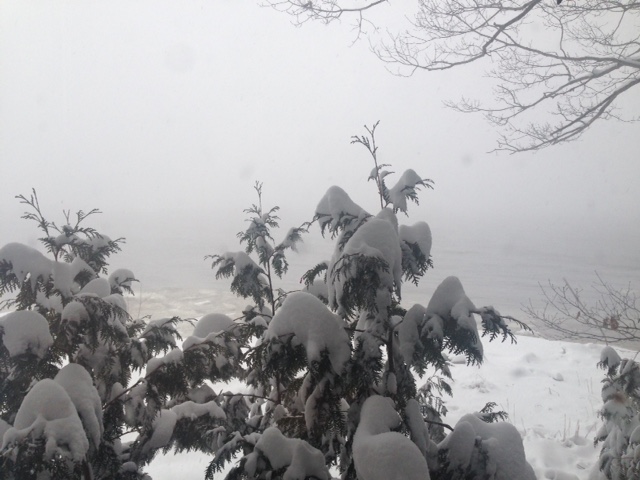 I’m sitting here in Maine having a snow day. I can only see about 30 feet in front of my cabin; everything beyond is obscured by white frosty particles, which weather reports tell me are falling at the rate of two to four inches an hour. It’s quiet outside, except for the wind.

There are 985 closings in the state of Maine today, and the governor has declared an emergency. I’m not going anywhere because our road has not been plowed, and from there the town roads probably have not been plowed, so it’s about two miles of unplowed snow between us and the nearest state road, which gets plowed all night long. It doesn’t matter. We’ve stocked up on wood for the woodstove, have a few gallons of drinking water, candles, battery and oil lanterns, food and beer. The power is still on.

I am extremely happy, almost giddy, thanks to this snow day. When I talk to them on the phone before the snow hits, the Zócalo staffers in Los Angeles ask me to explain my joy, and so I’m going to try. There are three reasons, roughly. One is the tradition of snow days. The other is the feel of the days themselves. And the last is a philosophical difference, which a Californian will never understand, and has only peripherally to do with snow.

It’s an enforced introspection, a state of cottony suspended animation.

Snow days are, first, a bit of nostalgia for when we were in elementary school and class was canceled because it was too dangerous to drive the school buses. Snow days were days when the usual rules and routines did not apply, when you got a get-out-of-jail free card. And they were delicious. They were a chance to read books and hassle my mother to let me cook something ambitious. My little sister liked snow days so much that before she was 2, when she could barely talk, she announced—in nearly inscrutable baby language—that it was “too windy out,” and tried to block the doorway when I was leaving for school. As I got older I made risky bets and tried to game the weather to put off doing homework and studying for tests. On snow days you are getting away with something, but it’s not your fault. You can only do what you are doing—staying warm and perhaps watching minute snowflakes fall on a twig near a window, stacking up and blowing over and stacking up again. It’s an enforced introspection, a state of cottony suspended animation.

Of course, if you’ve been plowed it is possible to try to do normal business in a snowstorm. But it’s dangerous, and by putting yourself in danger, you’re putting your fellow townspeople in danger when they have to help you out. In January 2011, my father was very ill, and I had to drive in a storm to the hospital to bring him to a radiation clinic. With tumors, time is of the essence. My father’s neighbor and I started off the 25-mile drive to the hospital to pick up my dad, mesmerized by the snowflakes streaming toward the car in the headlights. Those snowflakes made white pinpoints, zooming forward, smashing on the windshield. I had to grip the wheel hard to keep from flying apart like them.

We knew people who had died driving in snowstorms, and we knew the people they’d left behind, too. The scenery beside the road seemed foreign. With 30 feet of visibility, signs and trees I had never noticed loomed large while familiar buildings and landmarks were obliterated. We drove at about 20 miles an hour, always ready to turn the car’s wheels into the skid, feeling for the edge of the pavement with the tires. We were the only people on the road besides the snowplow drivers, and when we got to the hospital, they said the radiation clinic had decided to close. So the tumor also got a snow day.

Which is to say that snow days here are not really optional, though essential work does get done. When the weather cleared, we brought my dad home, and during the next storm the hospice nurses arrived in four-wheel drive and wearing neoprene snow boots they removed at the door, proceeding into the house in clogs. When my father passed away, in the middle of yet another January snow day, the neighbors came over, and we shoveled the two feet of snow in the driveway in T-shirts for some emotional release, and so the hearse could get in the driveway. The hearse, of course, was four-wheel drive, and the mortician, a friend of my dad’s, arrived in a suit, parka, and muck boots. They drove him off through the swirls and eddies of snowflakes.

Twenty-something years ago I moved to California to escape the snow and what it represented. In January 1988 I took the bus from midcoast Maine to the airport in Boston. That year the snowbanks were very high beside the roads. The bus stopped along the way to pick up boxes of worms, grown by Maine worm farmers, and to be delivered by the driver to bait stores in Boston.

I arrived in San Francisco that evening, and a limo driver offered me an illegal ride into the city for $10 while I was collecting my baggage. So I traveled into the warm city of San Francisco in the front seat of a Cadillac, laughing like an escaped prisoner. The air in the Haight smelled like flowers—not to mention jobs and opportunities more glamorous (and lucrative) than worm farming in the snow. For all my years in California, the weather never messed up my plans, and I didn’t worry about my neighbors nor they about me.

California was the best thing that ever happened to me. It gave me the illusion of choosing my destiny. Such choosing is an obligation in the minds of Californians; friends don’t let friends not “seize the day.” San Francisco is a place where people actually talk about “communities of choice” in the same sociospeak they use for “drugs of choice.” In San Francisco we discussed earthquakes, sure, and the fact that we lived on a ridiculous fantasy about water, but the dominant ethos of California is that reality can be overcome.

Californians do not believe in snow days. On a snow day you’re reminded that you live somewhere-in-particular, that nature has rules that you cannot override through determination, force of will, or positive thinking, that the weather can kill you. Two years ago I realized I missed the snow. And maybe I no longer believed I was a Californian just for showing up and trying on the positivity. And so I returned to the Northeast.

Here, snow days still follow the rules of physics–the massive quantity of snow that must be moved, its lack of friction, the optics of whiteouts, the cold–and rules of community: We have obligations to do right by one another, we have obligations to protect ourselves, we share the memories of the dead.