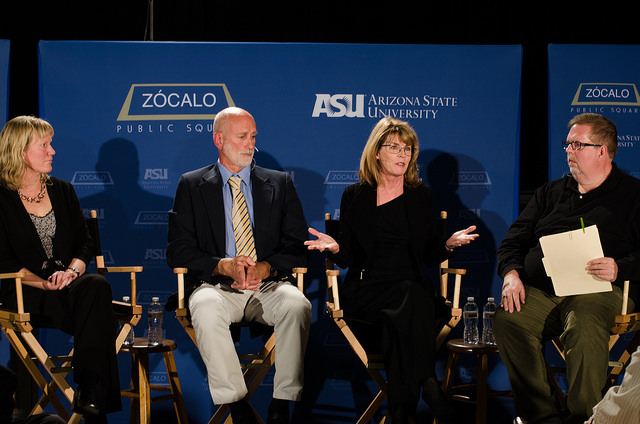 Over 30 million people rely on the Colorado River for water—for purposes ranging from drinking to agriculture to power plants. But scientists predict that the river isn’t going to produce the amount of water it did in the past—or does today. Which is why the question of whether or not the river can survive is a timely one, said Arizona Republic water reporter Shaun McKinnon. McKinnon was moderating a Zócalo/ASU event attended by a full-house crowd at ASU Colleges at Lake Havasu City.

Arizona Municipal Water Users Association executive director Kathleen Ferris said the U.S. Bureau of Reclamation estimates a potential shortage of 3.2 million acre-feet of water in the next 50 years, as demand for Colorado River water outstrips capacity. “We have to get back to reality,” she said. “What can that river really sustain, and how can we ensure that new growth is met by sustainable water supplies?”

Nature Conservancy Colorado River program director Taylor Hawes said that the river is also facing significant environmental challenges. The Colorado River is home to 42 native fish species, 30 of which are found nowhere else in the world. Four have gone extinct, and 16 are imperiled. Striking a balance between a healthy river system and the demands of farms and people is not an easy task.

Hawes said that it’s difficult to get people—who are dealing with 25 or 100 issues in their everyday lives—to make water a priority. The people of Denver and Las Vegas, for instance, recognize that the Colorado River has a problem, but they won’t recognize that it’s their problem. They don’t know where their water comes from.

Here in Havasu, said McKinnon, you’re right on the river, but the desert city has a limited supply of water. What’s it like to see golf courses in Phoenix and resorts in Las Vegas using the resource in a way that seems so wasteful?

Lake Havasu City’s water resources coordinator, Doyle Wilson, said that living on the river offers a much better perspective. But in general, people in rural environments—particularly if they get their water from a well or have it hauled in—are more aware of how much water they use than people in cities.

Hawes said that throughout the Southwest, “we’ve done too good a job in our water utilities”; people don’t know it’s a limited resource. Arizona, however, has changed the tone of the discussion by highlighting that the state is a desert—and needs to use less water.

Changing water use isn’t just about individuals’ decisions; significant legislative change requires the seven states that make up the Colorado River Basin to agree on big issues. “Nothing major gets done on the Colorado River without the U.S. Bureau of Reclamation being involved and without cooperation of the states,” said Ferris—which is why it takes a very long time. (Hawes referred to this glacial speed as “water time.”)

Because it can take decades to change water use laws, short-term efforts will have to be voluntary, said Ferris. One recent example of such an effort is an agreement by Lower Colorado Basin states to leave water in Lake Mead in order to prevent water shortages in Arizona.

Current laws, said Hawes, reflect the values of 150 years ago. They will be changed—but only when society gets behind them. In the meantime, we need to make space within the law for change.

Wilson said that a “spirit of cooperation has to take hold” throughout the Southwest. “Otherwise we will be mired in litigation for decades, and that doesn’t get anybody anywhere,” he said. In the meantime, he and other local water managers have taken the position that the best way to conserve water is to be as self-sufficient as possible: “We have to take care of ourselves.”

Some policies make self-sufficiency difficult. Wilson said that one policy he’d like to see changed prevents Lake Havasu City from making deals with Indian tribes for water lease agreements. Another rule designates all water below lake level under federal jurisdiction, which prevents the city from treating wastewater and storing it in the ground.

McKinnon asked the panelists how they find balance in their work between human water use and the river’s ecology.

Hawes said that it’s easy to know how much water a household needs and to make calculations based on that figure. But it’s a challenge to find a formula that dictates what the river needs. The Nature Conservancy is trying to replicate patterns found in nature as much as possible, like the big spring floods on the river that are followed by a hot, dry fall season.

We have to understand we’re never going to restore the river to what it was, said Wilson—but we still need to watch it carefully.

In the audience question-and-answer session, the panelists were asked whether homeowners and farmers pay different amounts for Colorado River water.

Yes, said Ferris—and it depends on where people and businesses are, too. In California’s Imperial Irrigation District, farmers pay $20 per acre-foot of Colorado River water. A single acre-foot, said Ferris, will serve 2.5 households for an entire year.

And in Lake Havasu City, said Doyle, the city pays $0.25 per acre-foot—mainly because they treat the water themselves.

Why, asked another audience member, don’t people in the Southwest see water as a common resource, one to be best used by the most people possible?

Ferris said that local economies were built on having secure water rights. Over the years, legislation gets piled up on those rights, and laws become interwoven and difficult to change.

Most people came to the West from the East, which was wet, said Hawes. The miners and farmers were the first to migrate—and the government needed to convince them that they could make a living here. Guarantees of a consistent water supply did the work of convincing them. 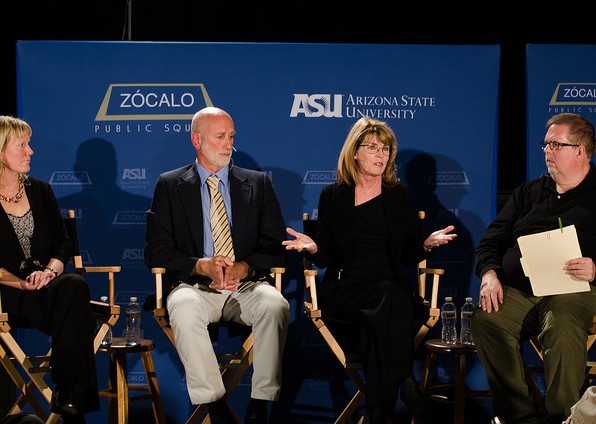 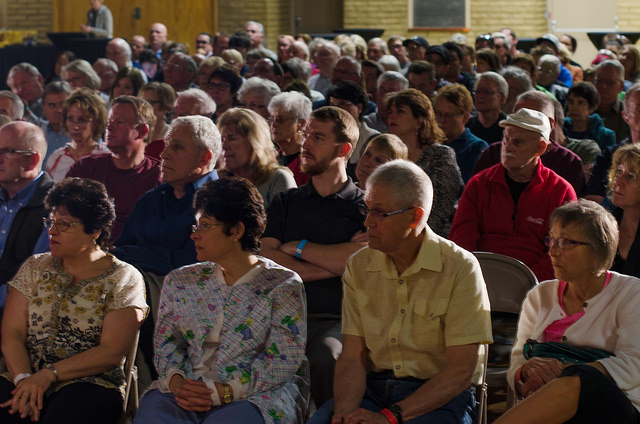 The full-house crowd at ASU Colleges at Lake Havasu City 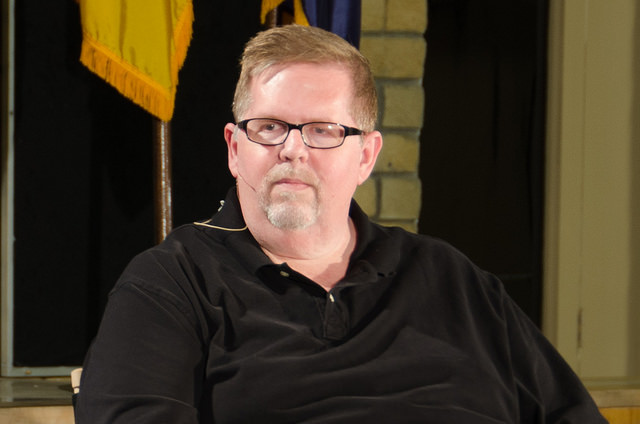 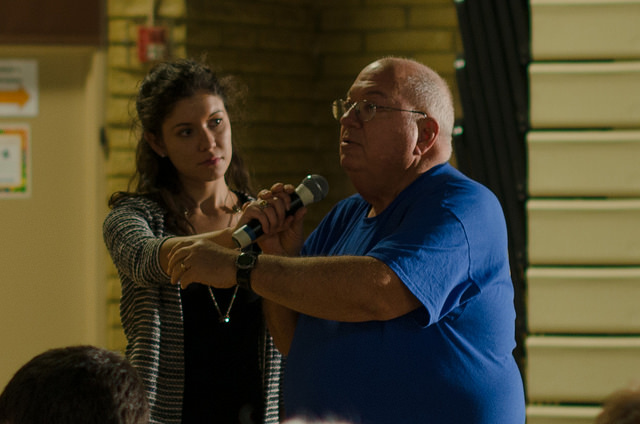 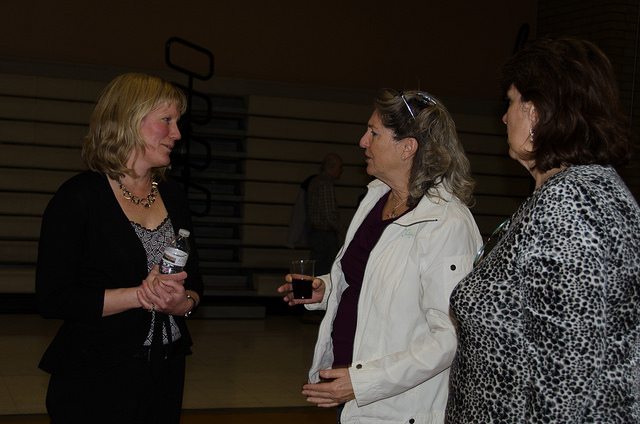 Taylor Hawes (left) talks with guests at the post-game reception 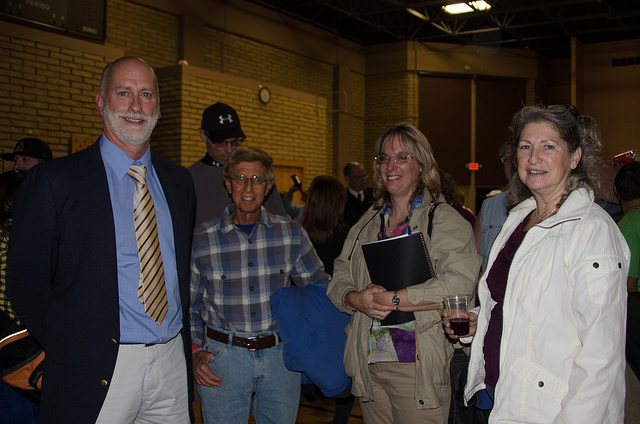