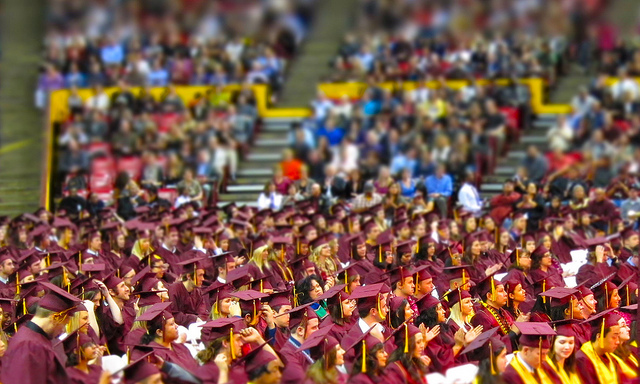 Walking into the college classroom on the first day of the semester, the young woman in front of me introduced herself to those sitting around her and smiled. She then looked over at me and said, “Mom, I’m not going to help you with this class. You’re going to have to do this on your own, I’m sorry.” I don’t remember even asking.

Earlier that week, Stephanie—the youngest of my four daughters—and I were sitting in a courtyard at our school, Chandler-Gilbert Community College, when she told me that she was dropping one of her classes and needed to add another. I told her I was taking geography and since she needed that class as well, we could take it together.

“Mom, I’m not going to help you with this class. You’re going to have to do this on your own, I’m sorry.”

She gave me “the look” with a resounding “No.” Then she changed her mind: “Yeah, OK.”

There is nothing quite like attending college with your daughter. For all the difficulties of getting your children educated, nothing is more challenging than trying to educate yourself at the same time.

The journey started years ago, when our family was living in North Carolina. I was a stay-at-home mom with hopes of returning to school once Stephanie started kindergarten. Eventually, I wanted to become a teacher. My dream was that my daughters and I could go to school together during the academic year and have family time during the summer.

Then plans changed. Getting divorced and raising four daughters alone is not easy, but I decided to go back to school anyway.

It would be very slow-going—I was behind. Algebra wasn’t even on my high school transcripts. So I found myself in community college, taking middle school math, three levels below the minimum college algebra class required to graduate. But I didn’t give up. I enjoyed it. Going to school became my place to go to invest in myself while still having time for a young family.

At the same time I was taking those math classes, my oldest daughter Amy, an eighth grader, complained about the new teacher in her own math class. Her regular teacher had a medical issue, and Amy was having trouble understanding the substitute, an older man who told long, drawn-out stories that made no sense. So I suggested that we talk to him and see what we could do to help the situation. She agreed.

I had just come from my math class earlier that morning and felt I could handle this. We walked into the room and there was my college math professor sitting at the desk looking up and smiling at both of us. Amy looked mortified–“No! How could this be?”

The two of us were taking the same class, which may have been embarrassing to Amy, but I thought it was great. I was happy to be with my girls and be in school.

He proved to be an amazing teacher. He set the two of us up in friendly competition. In the evenings, we would sit together and go over her homework. Amy looked at math as a puzzle and I turned his stories into a method that helped her see how to do the problems.

In her class, he would tell the students that Amy’s mom had gotten an A on her homework—and wondered what Amy could do to beat her mom. He got the class interested in the game. She knew my grades before I did, and it made her feel special. He turned that around and did the same in my class, and students would ask him about my daughter. It was fun. More importantly, we both learned. As a side benefit, it brought us closer.

We later moved to Arizona and Amy signed up for the high school marching band. Erin and Courtney–my other daughters–went to middle school and also signed up for band. Stephanie was in second grade. And I applied to Arizona State University.

Marching band for Amy included early morning practices at 6 a.m., Friday night football games and competitions every Saturday all across Arizona. Middle school involved field trips, teacher meetings and homework. Elementary school was filled with more field trips, class parties with baked goods, and after-school activities. And I had a full-time job. I never signed up for classes at ASU after being accepted, and college went on the back burner.

The years flew by. One by one, daughters moved out, leaving Stephanie the last one at home. She started taking courses in high school that satisfied college credits. Since I was not working at the time, I decided to go back and finish what I started.

I went to my local community college to learn about my options. Stephanie came with me and together we looked at my transfer credits from North Carolina. Her face dropped when she saw my grades. The adviser and I looked at her and I asked what was wrong. Mockingly she said, “Mom, really? One B? Out of all those A’s? Why?” She couldn’t believe I had received good grades. Apparently my daughters thought I had made up my grades in college to “inspire” them to do well in their classes, since that’s what moms do, you know! So I signed up and dug in.

Graduating with honors with an associate of arts degree, Stephanie sat in the audience—she was just four credits short of graduation.

In fall 2012, we both transferred to Arizona State. I chose to attend the Walter Cronkite School of Journalism and Mass Communication and Stephanie chose to be a photography major at the Herberger Institute. But when Stephanie visited Cronkite and saw pictures on the wall by photojournalism students, she decided to change majors.

As a mother, I tried to stay out of her way, planning my classes on a Monday/Wednesday schedule after finding her classes were on Tuesdays and Thursdays. She needed to have her own college experience.

But at the same time, there were moments when my daughter and I were peers. We laughed and cried during midterms and final exams. We rolled our eyes at difficult professors and homework assignments that made no sense. I also felt better connected to my other daughters and their educational experiences..

Stephanie took the fall semester off this year and spent time in Oregon and New York visiting two of her sisters. She plans to start at ASU again this January, and she should graduate next fall, having studied photography, journalism, and art history. Her goals are to get a master’s in anthropology and to work for National Geographic.

Graduation should come this spring semester for me, as there is one core class I need in order to finish. Stephanie and I have become each other’s biggest supporters and I couldn’t be more proud of all of our accomplishments. My daughter Courtney graduates this spring as well. Erin was the winner, having already graduated, but 2015 is our year!