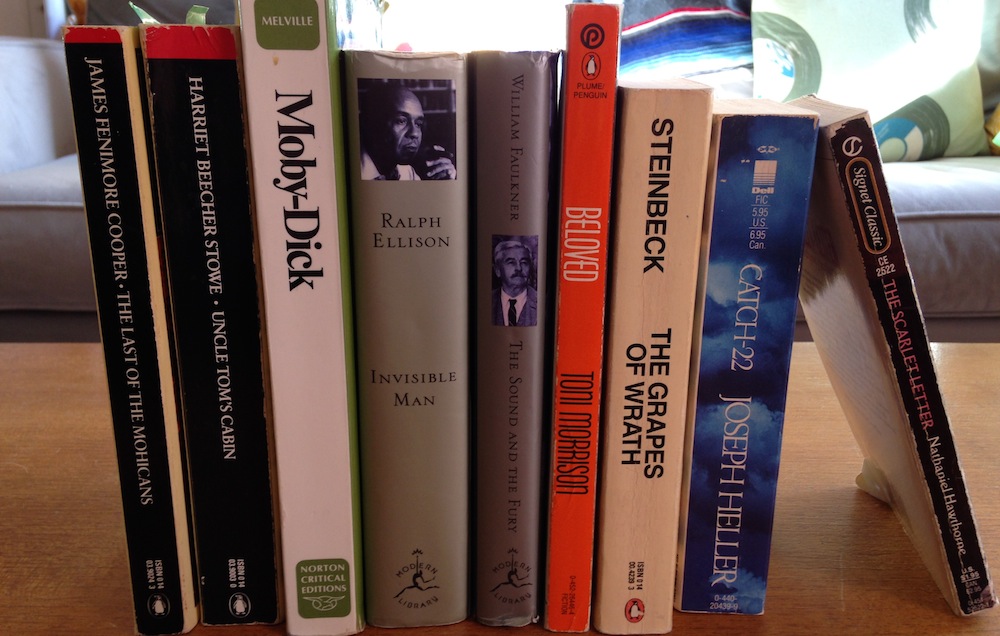 Most credentialed literary critics disdain it as a grandiose hyperbole, and creative writers tend to speak of it in jest. But for almost 150 years, all of us—writers, readers, cultural trend-watchers—have been obsessed with the idea of “The Great American Novel,” a piece of literature that somehow captures the gestalt of the whirling multitudes that make up our ambitious country at a crucial or defining moment.

Why this unkillable mantra about the preeminent American novel? The Russians, the French, and the Spanish don’t long for “the great Russian novel,” and so forth. Why should we? Like Australia, which is also obsessed with the Great Australian Novel, we’re a mega-sized ex-British colony with a long history of hypersensitivity to the gap between size and aspiration versus reputation as a cultural wasteland.

What first drew me to the subject of the Great American Novel idea was the strange obstinacy of its persistence for more than a century after the conditions that brought it into being seemed passé. After reading hundreds of candidates and thousands of critical commentaries on those books, it dawned on me that the leading contenders, as a group, offer us something uncannily close to a DNA scan of the American imagination.

Rarely can we pinpoint a date when a new literary fashion or cultural trend began. When did the Renaissance displace the Middle Ages? What was the first novel? Such questions lead to endless wrangling over firstness. But for the Great American Novel, we know precisely when it entered public culture as an idea with legs: January 9, 1868, in an essay by a now-forgotten Connecticut novelist, J. W. DeForest.

The timing makes sense. It was a watershed moment in national history.

Writing just after the Civil War, DeForest argued that with the country now reunified, fiction writers should stop concentrating on its separate regions, as Nathaniel Hawthorne and James Fenimore Cooper had done, and take in the country’s expansive sweep and social tapestry so as to capture “the national soul.” Revealing his own Yankee provincialism, DeForest proposed that the closest approximation to date was Harriet Beecher Stowe’s Uncle Tom’s Cabin (1853). (Ironically, he praised its rich array of characters and places North and South and not its anti-slavery thrust, wrongly supposing that Appomattox had put the race issue to rest.)

Yet his essay was well timed. The novel was just coming into high fashion in the United States. The call for the Great American Novel was calculated to appeal to its audience’s lingering embarrassment at its cultural dependence on European models. American writers and readers were acutely sensitive, rightly or wrongly, about the gap between the country’s growing industrial might and its relative underperformance in the areas of art and culture.

All this explains the birth of the Great American Novel idea much better than its persistence, long after it became clear that American literature had nothing to apologize for. From 1930 through the 1990s, American writers garnered a disproportionate share of Nobel prizes, and U.S. literature became the dominant player in the English-speaking world. If anxiety about legitimizing our claim to culture were the whole story, by all rights the Great American Novel mantra should have long since disappeared.

But it hasn’t, mostly because of two other intertwined factors that relate to the issue of national identity and also the particular characteristics of the U.S. literary scene during the last century and a half.

Factor one: Even before the Revolution, the land that became the United States was widely seen by its white settlers, by its leaders, and by foreign observers in futuristic terms, as a project in the making, founded on the promises that would come to be enshrined in the Declaration of Independence (life, liberty, the pursuit of happiness), yet struggling ever since to make good on them. So long as the nation remains the primary diaspora of choice for the rest of the world, that view of this country as a place that is or ought to be exceptional will continue, but with it also chagrin at the shortfall between national is and national ought. Serious U.S. writers have gravitated to that space in between, casting themselves as the conscience rather than the cheering section. The overwhelming majority of the dozen or so Great American Novel candidates taken most seriously, from Uncle Tom’s Cabin to Toni Morrison’s Beloved, have shunned flag-waving patriotism and concentrated on the gap between promise and delivery. American audiences proverbially love feel-good plots and happy endings, but not when it comes to assessing Great American Novel candidates (or when the Academy picks contenders for the Oscar for “Best Picture,” for that matter).

Furthermore, the nation’s geography and social tapestry has become so much more complicated than when the original 13 rebellious British colonies uneasily allied in the 1770s—although it was plenty complicated even then—that it’s become an increasingly formidable challenge to pin down one “American experience” or “national identity.” The challenge of pinning down so huge and increasingly heterogeneous a moving target is particularly visible in such monumental, encyclopedic Great American Novel nominees as Herman Melville’s Moby-Dick and John Dos Passos’ U.S.A. All this has guaranteed the Great American Novel will remain a future prospect rather than an achieved result.

This brings us to factor two: Within a generation after DeForest, it became pretty much accepted that the Great American Novel was to be a plural disguised as a singular—a series of literary assaults rather than a once-and-for-all definitive work. After all, nobody really wanted that anyway—a book to end all books. What would writers and readers do for an encore? This tacit understanding ensured both that the Great American Novel dream would continue to thrive, and that discussion of candidates would tend to become shrouded in a fog of contentious impressionistic blather.

By connecting the family resemblances between favored novels with favored lines of argument about what a Great American Novel should be, however, I was able to identify a certain number of specific scripts or scenarios that seemed especially promising for generating the 20 or so leading Great American Novel candidates, from The Scarlet Letter, Moby-Dick, and Uncle Tom’s Cabin (the earliest-written top candidates) to the turn of the 21st century. My book The Dream of the Great American Novel focuses on four such scripts, which taken together offer something a virtual map of the force fields that have shaped national fiction as a whole. One is immortalization through multiple retellings, whether in fiction or film or any other artistic medium, of a particular novel’s plotline, like the saga of the embattled heroine of The Scarlet Letter. Another is the family saga that grapples with racial and other social divisions, often turning on a plot of love or friendship across the divides. Still another targets assemblages of characters who dramatize in microcosm the promise and pitfalls of democracy.

Perhaps the single most popular and durable script of all follows the life struggle of a focal figure—conventionally, but not always male—who strives to transform himself or herself from obscurity to prominence. Favored candidates, such as F. Scott Fitzgerald’s The Great Gatsby and Ralph Ellison’s Invisible Man, unfold as inquests into the promise and perils of the homegrown culture myth of “the self-made man.” In the process, they showcase two further points as well.

First, most Great American Novel scripts are distinctive but not unique to U.S. literature. (The U.S. remains, rightly or wrongly, the proverbial land of opportunity, but upward mobility plots pervade world literature.) Second, the scripts change over time. Before 1930, the protagonists of American up-from novels were overwhelmingly white and American-born; since then, a far greater percentage have been immigrants and people of color. Readers in 2050, then, shouldn’t be surprised to find the favored scripts altered considerably from 2015, and the distinctions between U.S. and other literatures even more porous.

But will the Great American Novel idea itself continue to outlive the “American Century,” as the 20th became called? Only time will tell. But whatever that future may be, my years of studying Great American Novel-ism have convinced me that despite appearances to the contrary, the vast and expanding field of American fiction isn’t just a haphazard centrifuge. Despite how loosely it gets slung about, Great American Novel talk reflects the core logics underlying the often sharp, surprising twists and turns of its long history. And key to the impetus that drives the seemingly unkillable dream is the myth of the United States itself as a culture of aspiration, even and indeed especially when those aspirations seem balked or betrayed, as our greatest novelists again and again have shown.