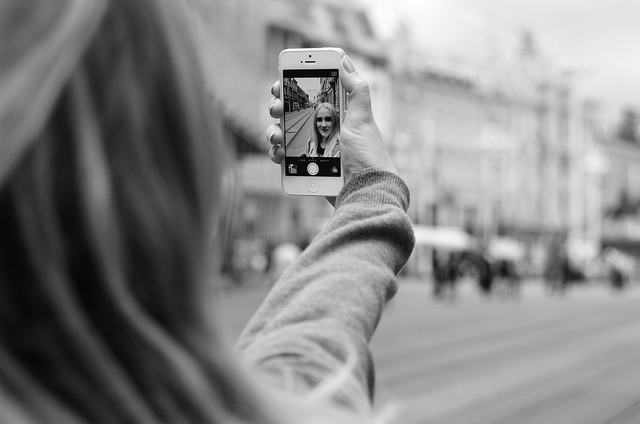 New Year’s Eve, the Super Bowl, next up Valentine’s Day—these events are burnished to a luster by the media. We are inundated with special public moments to be savored and preserved on our cellphone cameras. Along with the pulse of public moments, we strive to capture private ones—a wedding proposal, or a romantic dinner, or just a picture of the food on our plates. And we take photos of ourselves—in front of a mirror or anywhere, anytime. Anytime, after all, is a moment.

We took 880 billion cellphone images last year, according to Yahoo’s guess. What happens to these images? They fly off to friends, providing a quick laugh or smile. They are filed and posted on Facebook or Instagram and printed—880 billion moments.

Most of us remember the phrase “a Kodak moment.” Kodak, a behemoth half a century ago—now defunct—urged us to use film to capture those moments. How quaint their efforts seem now. With our iPhones at the ready, an image is almost instantaneous and we scarcely need to be urged. Back then we tried to understand how a camera’s f-stops worked. Then we replaced our traditional cameras with the boxy throwaway cartridges of the Polaroid. Images went from film we developed (and could hold up to the light) to JPEGs (whatever they are) that you could put on CDs (remember those?). We went from 8-millimeter home movies to digital clips.

People seem to be constantly pulling out their phones, more focused on capturing the shot than the experience.

I don’t mean to sound like a curmudgeon bent on banishing technology. After all, the trail of the selfie is long and deep, winding back through Rembrandt’s self-portraits all the way to Narcissus, fated to gaze at his shimmering image. Today, however, people seem to be constantly pulling out their phones, more focused on capturing the shot than the experience. They capture so many images that none is special, none is savored. And so these images—byproducts of the urge to capture the next moment—sit and gather virtual dust, a collection of mannequins in a vast warehouse.

So put your iPhone down and take a minute to think about it: we are self-consciously striving to capture more moments in images that we will skim over, delete, or lose in the onrush of new technology. Given our urge to capture moments, what can we do to make them matter more? Fortunately, we have a solution. It’s delicate and unpredictable. Yet we are hard-wired for it.

Moments are made for memory. Memory creates moments.

And by that, I mean the memory that stores images in our heads, not the electronic space in which we store images. If we are constantly staging meaningful moments, I fear we elbow out the possibility of the whimsical, unpredictable events that produce the memories that could amuse, guide, and sustain our future selves.

Let me tell you a story of such an event—an everyday moment back at my family’s old home in Los Angeles that became a memory. Effortlessly, I fling back time until I am my high school self. I am approaching the back of a Ford station wagon—a land yacht, its back tailgate swung open. My mother, young and alive, is taking out groceries and I scramble to help her. I grab a brown paper sack and turn toward the front door. My mother is disappearing inside.

On the step is my younger brother—not 50, but 10, lying back lazily. We lived then in a house on a hill, a steep driveway curving up into the garage. As I near the front door, I adjust the heavy bag and my arm underneath pushes up the contents. Two grapefruits at the top pop out and drop to the driveway. My brother starts laughing.

I get the bag under control and look down at the grapefruits. They are about 6 feet apart, each starting to roll down the drive. I neatly stop the one on the right. If I bend down to pick it up, the one on the left will speed off into the street. I rush over and stop it with my foot. But now the other grapefruit is hurtling away. I chase it down. But its conspiring fellow speeds off, leading me to zig zag down the driveway, 10 pounds of groceries jostling in my arms.

I hear my brother’s uncontrollable laughter. His body shakes, his head bobs, a high pitched hiccupping sound fills the air. It’s as if my brother has been possessed my some mischievous laughing genie. He could help me play zone defense against these sneaky grapefruits. Instead he laughs. Loudly.

Fifty yards farther, now in the street, I sprint ahead and stick my foot in front of the grapefruits. Pinned against the curb, they stop.

It is a silly memory, an unplanned minute from millions in my life. And yet I savor it. In a fleeting cameo, my mother is alive. Smiling at me as she enters the house. Or is that my internal editor, making the clip even better? And my brother’s laughing fits are among my life’s treasures.

I believe in the moment of rolling grapefruits. A moment that, at the time, seemed silly—but now, decades later, has been made meaningful by memory, perfectly preserved and swimming to the surface of my consciousness when I need it.

Imagine how such a moment would have played out had I tried to impose meaning and capture it for all posterity. Just the self-conscious desire to capture it would have changed its spontaneous nature. And our imagination and memory can be a wonderful Photoshop, editing out the inconvenient flaws and sliding in images ordered up by our psyches, all the better for being invisible.

Don’t get me wrong: I like that we have the choice to snap a quick picture or video clip. But I urge us to push back against the tide of 880 billion images. Many of our best moments can’t be planned, and a life focused on creating planned moments is not as rich as a life lived for the moments themselves. Often our best moments catch us unaware, no iPhone in hand, but experienced fully in the moment preserved in memory, rolling grapefruits whenever we need them.