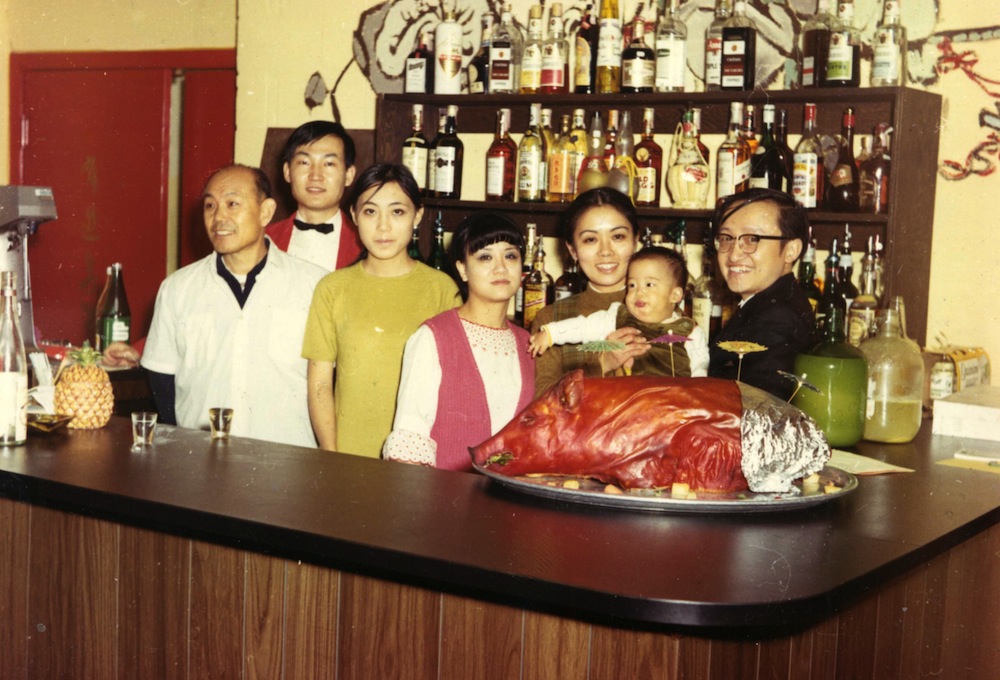 I grew up in a Chinese restaurant called the Peking Restaurant in rural New England during the 1970s and ’80s. I was that kid you saw running around the tables and through the waiters’ legs, and playing with whatever I could get my hands on. I had access to some cool things—pupu platters for my birthdays, all the fortune cookies I could eat, the pleasure of celebrating two different new year’s days every year with treats like a roasted pig during the Year of the Pig. And, when I was old enough, I could use the deep fryer to make dinner. As a child, I didn’t see the complexity of the Chinese-American story hidden amongst the aromatic dishes being served. To me, the restaurant was just home, the place I grew up.

My family’s restaurant was far from the hustle and bustle of the nearest Chinatown, all the way down in New York City. For many years, we were the only Chinese family in West Springfield, Massachusetts. Today, Chinese food is so thoroughly woven into America’s culinary tapestry that you’d be hard pressed not to find a Chinese restaurant in most modest-sized towns. They run the gamut: chic, high-end eateries, barebones take-out counters, and bustling all-you-can-eat buffets. But the success of Chinese food culture was hard-earned. And the history of the challenges it faced appears in a surprisingly common place: the finely inked print of your local Chinese restaurant’s menu.

The most fascinating aspects of the restaurant menu aren’t the exotic names or the daily special, but the wonderful time capsules captured by the food and ingredients that make up each dish. Some of the selections you make for your family’s Chinese food night provide snapshots of the different waves of Chinese immigrants coming to the United States, as well as the American reactions to those new arrivals.

A Chinese restaurant’s menu is usually comfortingly familiar: sections for noodle, vegetable, meat, and the chef’s special. One common dish is sweet and sour pork. It is a traditional southern Chinese dish that in its original form looks far different than the Day-Glo red dishes served today. Many of the first Chinese immigrants originated in southern and southeastern China. They took the risk of coming to America for new opportunities and a chance to make their fortunes as miners, railroad builders, farmers, fishermen, launderers, and restaurant owners in the mid-19th century. 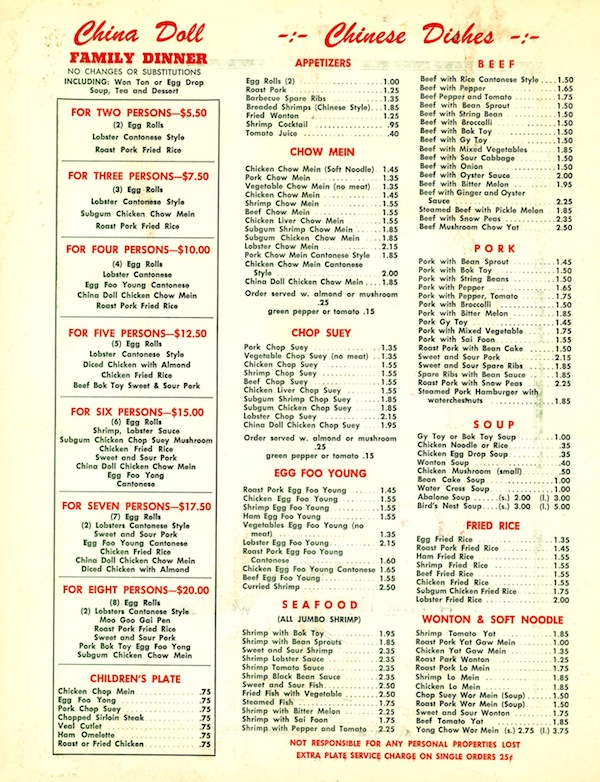 Those Chinese were increasingly looked upon as outsiders who refused to conform to societal norms and took jobs away from Americans. Anti-Chinese feelings began to rise across the United States in the late 19th century, but were especially strong in the West where jobs were scarce as cheap manufactured goods and European immigrants arrived via the railroad. Chinese immigrants found themselves being blamed for the nation’s ills. This wave of resentment culminated in the 1882 Exclusion Act barring Chinese immigration.

Around the turn of the 20th century, chop suey became the quintessential “Chinese” dish and was one of the earliest to capture the imaginations of adventurous Americans. During the heart of the exclusionary period, the dish exploded in popularity and actually aided restaurant owners in overcoming the restrictive attitudes and laws of the time. People may not have liked their foreign neighbors, but they loved their chop suey. Soon the dish began appearing in pop culture: One song pined, “Who will chop your suey when I’m gone?” Edward Hopper depicted two women conversing at a restaurant in 1929’s “Chop Suey” painting.

There is some irony here. It’s long been assumed that chop suey is actually a wholly American invention. A recent book by Andrew Coe, Chop Suey: A Cultural History of Chinese Food in the United States, indicates that chop suey in some variation or another does exist in China. I asked my personal expert on the subject, my father. His opinion? Chop suey (sort of) means extra bits or leftovers in Chinese, and who doesn’t have leftovers? 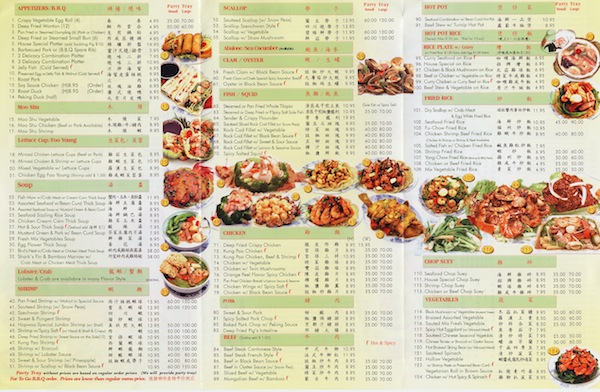 The exclusionary laws were lifted during World War II, when America allied with China, but wholesale changes in immigration laws did not happen until 1965 with the Hart-Celler Act. The new law opened up immigration to the broader Chinese diaspora spread around the world, including those that had fled the civil war on the Chinese mainland for places like Taiwan and Singapore. With the arrival of more Chinese immigrants came a wider range of regional tastes and recipes. Sichuan and Hunan (provinces in China) started showing up in the names of dishes. Recipes inspired by those provinces make up a recognizable portion of many Chinese menus. For example, it is possible that a section of the menu will include an entire row of Hunan beef, chicken, shrimp, or—in my latest takeout menu—something called “Hunan Delight.” One of the more popular and successful Sichuan dishes to come from this period, is kung pao chicken, a dish well known for its spiciness and easy-to-remember name.

It was during this period, circa 1968, when my family came to America via Taiwan. My father chose to open a northern style eatery with specialties such as Peking duck, double-cooked pork, and hot and sour soup. He wanted something different than the traditional southern restaurants that already dotted the landscape. But in the end they served both newer northern dishes and the more common and expected southern recipes. Business was business. 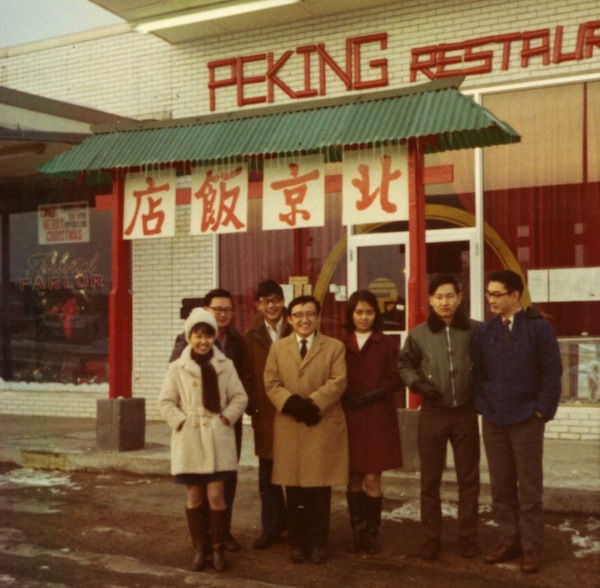 The author’s family with co-workers and friends, outside their restaurant in the early to mid-1970s

Opening a Chinese restaurant might not have been my father’s first choice. He came to America originally to carve out a career as a scholar with his degrees in political science and mathematics. But like many Chinese immigrants, even some 25 years after the end of exclusion, this was the route to success open to him. It did give my mom, a lifelong fan of cinema, the chance to meet Paul Newman. Newman had stopped by after a promotional event in our shopping mall for lunch. He liked it so much he brought his wife Joanne Woodward back with him a few weeks later.

The complexity of the Chinese-American story cannot be unraveled though a menu alone. But it can tell us a little bit about ourselves—how we as Americans treat one another and how we accept the new and the different. These little windows into Chinese-American history show us how, despite restrictive laws and great animosity, Chinese immigrants persevered. They took the limited opportunities given them and succeeded so wildly that Chinese restaurants are a thriving, essential part of the American experience.

In fact, at last count there were over 50,000 Chinese restaurants in the U.S.—more than McDonald’s, Burger King, and Wendy’s put together. Critics say that Chinese food from a takeout menu isn’t authentic Chinese, that it’s more like American Chinese food. I think there’s a clear alternative way to describe it: It’s now all-American food.