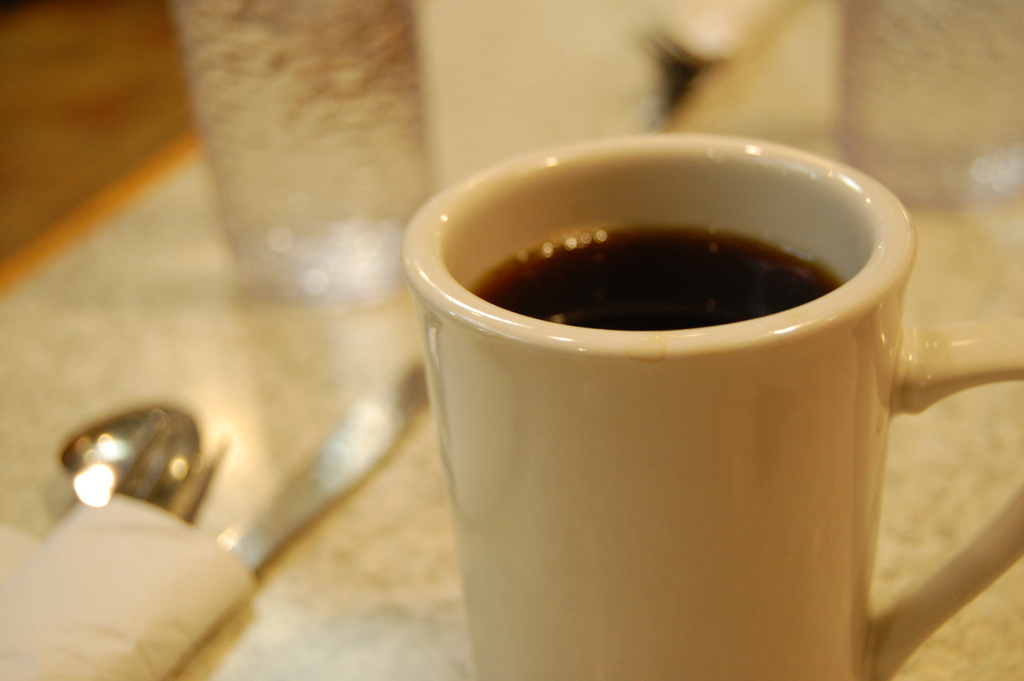 One June morning years ago, during a cross-country bike trip, my brothers, a couple of friends, and I sat in a diner in Sandpoint, Idaho, waiting for a drizzle to pass, eating eggs and drinking coffee.

The coffee, as I recall, was no great shakes. It likely came in thick, bone-white mugs, the rims pitted and slightly stained from years of use. We were just becoming aware of gourmet coffee in those days. And, sure, if you’d asked if we wanted the diner joe or a cup of Sumatra Mandheling like they served at Brillig Works in Boulder, we’d all have opted for the latter. But we weren’t in Boulder, the gourmet coffee was not available, and yet we had a blast drinking the bitter diner java, joking around, and, finally, too jacked up to sit still, rolling down the road.

Most coffee we drink in the U.S. is not the type favored by coffee connoisseurs. Folgers and Maxwell House remain the nation’s most popular coffee brands by a long shot.

These days, gourmet coffee is everywhere. And we’ve got a million new ways to prepare it. In addition to cold-pressed coffee, we’ve got the Japanese siphon process, a plethora of pod brewers, and coffee that comes from fancy machines like the Roasting Plant’s Javabot. And then there are concoctions like the flat white—an espresso and steamed milk blend—that suddenly become trendy when the Starbucks marketers put them in heavy rotation.

But it is easy to overlook an enduring truth amidst the gourmet coffee shuffle: Most coffee we drink in the U.S. is not the type favored by coffee connoisseurs. Folgers and Maxwell House remain the nation’s most popular coffee brands by a long shot. Despite the gourmet coffee boom, in this golden age of fine coffee, it’s primarily the mass-market blends that keep America caffeinated, and those diner cups full.

Once, hitchhiking through Wyoming in a snow squall, I caught a ride from a young couple. They were vagabonds who had made a tidy little home in their pickup with a camper shell. We pulled off at a truck stop in Rawlins. And I remember how that coffee—plain old truck-stop coffee—warmed us up, strangers waiting out a blizzard. When I got dropped off in Cheyenne a couple of hours later, I felt I was leaving old friends.

Over the years, how many late night or early morning road trips, outdoors adventures with friends and family, or travels to remote job sites have been undergirded by diner coffee? Too many to count.

Is it just nostalgia that makes me appreciate—not crave, but appreciate—the coffee so often dissed as inferior? Probably. Who can deny the deep emotions triggered by a late night cup of joe, reminiscent of Edward Hopper’s “Nighthawks”: adrift in midnight America, the clatter of the dishes, the warm cup of diner coffee. You don’t get that feeling at Starbucks.

Ounce per ounce, Folgers and Maxwell House coffees are more caffeinated than most specialty coffees. And there are two reasons for this. First, they tend to be lightly roasted. A light roasted coffee has slightly more caffeine per bean than a dark roasted coffee. Second, they typically include blends of arabica and robusta beans. Arabica, the mountain-grown coffee beloved by coffee connoisseurs, tends to taste smooth. Robusta, the cheaper, hardier, easier-to-grow coffee, often has a bitter tang (one coffee expert says it tastes like burnt rubber). But here’s the catch—robusta has much more caffeine than arabica, often twice as much.

So that cup of java in the diner or truck stop, unless it is brewed weakly, will likely give you more of a jolt than a cup from an upscale café. And that caffeine is a big part of what pulls us off the two-lane road to a diner in the middle of nowhere, and brings us back to the downtown deli where the waitress endlessly refills our coffee cups.

Recently, I stopped at a country store at a crossroads in northern Maine on a frosty morning. I’d only planned to ask directions, but got into a conversation about fishing with a friendly local. So I had a cup of coffee while we talked. Unlike some New England convenience stores, this one did not have 15 flavors of Green Mountain coffee in vacuum pots, just two of the old Pyrex coffeepots on hot plates. It wasn’t the gourmet stuff, but it definitely hit the spot.