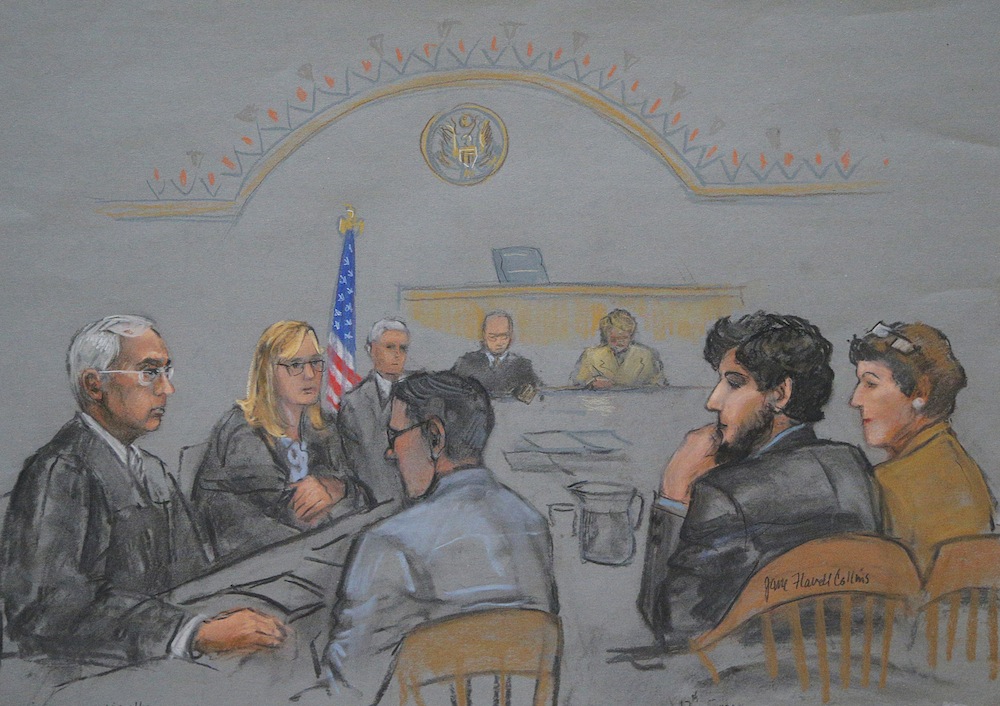 With a jury pool the size of a small town, a questionnaire of nearly 100 questions, and an accused mass murderer’s life in the balance, the jury selection in the first Boston Marathon bombing case has consumed more time than the vast majority of trials do from start to finish. Jury selection started January 5, and the scheduled trial start date of January 26 has come and gone. After more than six weeks, prosecutors, defense attorneys, and the judge are still trying to cobble together a group of jurors who haven’t already decided that Dzhokhar Tsarnaev is guilty.

I’ve watched a lot of trials and heard from a lot of jurors—first as a reporter covering the court system in L.A. and, for the past nine years, as a jury consultant who (in most cases) has worked for the defense. I’ve been a part of jury selection for civil trials in 17 states, on subjects including police use of force, workplace discrimination, and cruise ship negligence, but none has ever stretched longer than a month. Jury selection is a complicated process for even straightforward trials, which is why jury selection in Tsarnaev’s trial is likely to be as difficult as digging out from under all that New England snow.

Jury selection starts well before any jurors enter the courtroom. There’s a science to putting together the questionnaire such as the one jurors were provided in the Boston case and that we typically use in my cases. You try to select questions that will ferret out bias, insert questions that will prompt a juror to start thinking about particular themes that will help your case (for instance, personal responsibility), and keep out questions that will turn every juror into a red flag. (For example, virtually all jurors say they dislike frivolous lawsuits—that doesn’t mean they’re all bad for the plaintiff.) Many trials also make use of surveys to identify the demographics of those jurors most or least likely to favor them.

The term “jury selection” is a misnomer. The process is more accurately described as “de-selection” of the worst, most biased jurors.

We often get a list of names before questioning and look online for everything we can find about potential jurors: property records, Facebook pages, LinkedIn profiles. Almost everything is relevant—a fitness board on Pinterest could indicate a juror who values taking care of her health, and conspiracy-leaning Tweets may signal a juror who will be all too ready to buy into the plaintiff’s theory of cover-up. When we get the list of names in advance, we do the searches in advance as well—up to 700 in a single weekend. More typically, we only learn the names once in the courtroom, so I snap a picture of the list with my iPhone and text it to my staff, who immediately start the digging back at our home office in Orange County.

We continue to monitor whatever public social media we can find during the trial. While observing a case unfold in Florida, I saw a Facebook status update from a juror that indicated he was talking about the case to his friends while the evidence was still coming out. It was impossible from his posts to know which way he was leaning, but his clear disregard for the judge’s directives warranted booting him from the jury.

In the Boston trial and most other trials I’ve seen, voir dire—the questioning of prospective jurors to elicit bias—consists of calling in jurors individually and asking them to elaborate on the opinions they shared on their questionnaires. This allows potential jurors to speak far more openly about delicate subjects such as the death penalty and avoids poisoning the pool with extremely strong opinions.

Unfortunately, individual voir dire also eliminates the opportunity for the panel of potential jurors to influence one another. If we already know a juror will be kicked off for defense-leaning bias, we may still question him further in front of everyone so he can share his relevant knowledge and essentially coach other jurors about a crucial topic. For example, a juror who has had back surgery can share the significant risks involved, regardless of what care the hospital provided. In the same vein, we want jurors with adverse experiences to keep them quiet, such as the Los Angeles juror all too willing to share about the recent death of his cousin at deputies’ hands during the civil trial of police accused of improperly killing an unarmed civilian. 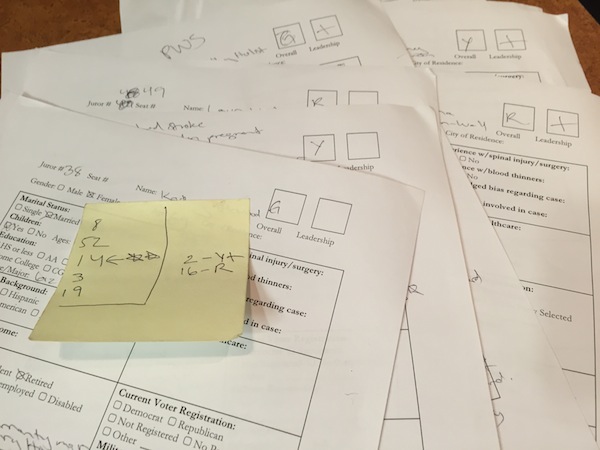 No matter how the questioning is done, both sides are trying to eliminate the jurors least likely to favor their side. In fact, the term “jury selection” is a misnomer. The process is more accurately described as “de-selection” of the worst, most biased jurors. Virtually every lawyer I know classifies jurors during jury selection with some sort of scale from best to worst—I use red, yellow, and green and add a “plus” if the person has leadership experience. We always highlight potential leaders (such as teachers or people in upper management) because we need to be especially careful about leaving them on the jury. A plaintiff-oriented leader with the power to persuade the jurors in the middle is far more dangerous than a passive one. I’ve worked with many lawyers (and our shared clients, the actual defendants on trial and/or the insurance company that would be stuck with the bill in the case of a plaintiff verdict) who are so eager to “get the greens” on the jury that they forget the other side will most likely strike them. Identifying the three, six, or nine people we should get rid of is the most pressing goal, and I always keep a running tally on a Post-It next to me of the top five jurors we need to strike. The number of strikes varies depending on the trial, the judge, and the expected length of the case, but is typically four to eight per side. To provide context on the scope of the Boston trial, each side will get 20 strikes.

In Boston, it’s clear the attorneys are doing their best to try to rehabilitate some of the potential jurors to keep them on the panel. Those who oppose the death penalty are being probed to see if there’s any wiggle room in their opinions. The same is being done for those who categorically believe the accused is guilty. In the cases I’ve worked on, we don’t do rehabilitation because we don’t think those people have any chance of getting on the actual jury. Rehabilitation prevents the judge from removing jurors from the pool “for cause,” without penalty to either side, which he can do if the juror straight-out says she can’t be fair. We want to keep those jurors with obvious biases in our favor so that the other side is forced to use their valuable strikes to get rid of them.

With the plentiful bias among the jurors in the Boston case, it might seem almost a relief to find one with no strong opinions and no hardship impeding him from sitting on a multi-month trial. But beware the juror who seems too eager to get in that jury box. A sense of civic duty or retirement-related boredom aside, virtually no one wants to be in a courtroom for that long, no matter how high-stakes the trial. We once were in voir dire with a person who eagerly agreed to move a doctor’s appointment and a vacation in order to be a juror on a trial against a hospital. But a review of the hospital billing records turned up that her husband had died at the facility just the previous year. We didn’t keep her around long enough to find out how, as that information alone convinced us she had an agenda.

Jurors are often unaware that all this strategizing is going on. When I am sitting at the counsel table with the lawyers in front of the bar, I try to look innocuous to avoid tipping off the other side about who I am. It helps that I don’t look like most jury consultants—who are older, Ph.D.-types. Dr. Phil, for instance, is probably the best-known jury consultant; he became famous after advising Oprah Winfrey on a case in Texas.

In Boston, they’re never going to find those jurors with no knowledge of the bombing. The best they can hope for is finding people who don’t indicate either verbally or by any other means that they’ve already made up their minds. The length of this jury selection is evidence this trial touches far more emotional chords than expected and is also a sign of these media-saturated times. So much has been published about this tragedy and its aftermath. If someone admits to still being open-minded, it begs the question: What more could you possibly need to hear? In Boston, both sides are hoping that in this group of 1,373 they find the few still willing to listen.