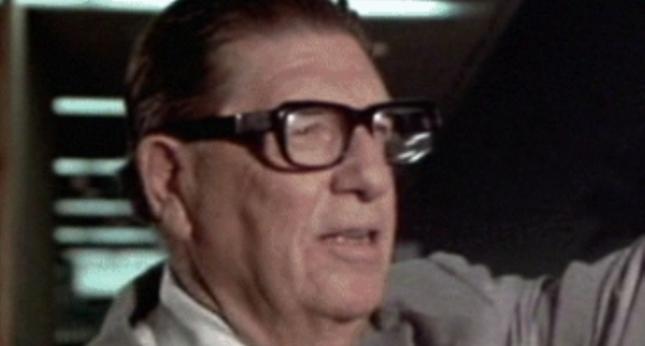 My guess is that few people in the audience at the Zócalo/KCRW screening of Mayor Eric Garcetti’s favorite movie Airplane! will recognize the man who hails a taxi at LAX at the beginning of the film. He was not an actor but a major California political figure when the movie was made in the late ’70s. And Howard Jarvis’ influence—as the leader of California’s famous property tax revolt, Proposition 13—lives on.

How did a man who described himself as having “a face like a mudslide” get a role in a movie? One answer is that the men who made Airplane!—David and Jerry Zucker and Jim Abrahams—made bold casting choices part of their comedy to a degree seldom seen in films, before or since. Real characters from Los Angeles and Hollywood showed up as characters in their movie, and actors were cast against type. Before they were in Airplane!, Leslie Nielsen, Peter Graves, Lloyd Bridges, and Robert Stack were not considered comedians.

As for Jarvis, the movie’s producer, Howard W. Koch, invited him to be in the picture. Jarvis told me the story when I worked for him back when the movie came out in 1980. “I told Koch, ‘I’m no actor.’ Koch says, ‘Well, you don’t have to know anything to be an actor.’ Which I guess is true, so I agreed. It took them eight hours to film my two or three minutes.”

Why did they bother to put him in the movie? Jarvis was a hot property, then. Proposition 13 had won by a landslide, and the tax-cutting mantra reverberated throughout the political world and became a major part of the 1980 presidential campaign. Jarvis was on the cover of Time magazine (a big deal in the pre-digital age) and a national figure. And his politics might have fit well with some members of the filmmaking team. Years later, David Zucker directed An American Carol, which lampooned contemporary American culture from a conservative perspective.

Airplane! debuted in the summer of 1980, a turbulent time in America. The presidential race between incumbent Jimmy Carter and challenger Ronald Reagan was about dead even in the summer polls. People talked about how the Misery Index, which measured unemployment and inflation, was at a staggering high. The country also faced high interest rates and skyrocketing gas prices.

Americans needed a laugh and a release from difficult times, and Airplane! supplied those things. The movie was silly—yet it was a hit with critics and audiences alike. Roger Ebert of the Chicago Sun-Times wrote: “Airplane! is sophomoric, obvious, predictable, corny, and quite often very funny. And the reason it’s funny is frequently because it’s sophomoric, predictable, corny, etc.”

For these reasons, and because it came to represent a certain time and place, Airplane! has endured. The film was the fourth highest grossing film of 1980 and made more than 23 times what it cost to create. In 2000, the American Film Institute ranked Airplane! number 10 on its list of the 100 funniest American films. In 2010, the Library of Congress selected Airplane! for preservation in the National Film Registry.

The movie had been out awhile when, on a slow weekday afternoon, Jarvis decided it was a good time to see the film. He did not attend a premiere. I don’t know if he was invited or if travel schedules got in the way, but the movie was nearing the end of its theatrical run. So Jarvis, his secretary Peggy, and I closed the taxpayer association office on Wilshire Boulevard and drove up to Mann’s Chinese Theater in Hollywood to catch a late afternoon show.

The movie was playing in one of the newly added theaters, not the main cinema palace built in 1927 and featured in many films. In the lobby, a theater manager recognized Jarvis and retrieved an autograph book used when movie actors came to the theater. Jarvis signed, not as a political figure, but as an actor. The end of the theatrical run on a weekday afternoon did not draw a crowd. As I recall, there were only five people in the theater, including our party of three.

Howard was entertained, although I don’t remember now any belly laughs coming from him. I’m sure there will be more at the Zócalo/KCRW screening. But that was a long time ago. So long ago that LAX had just one level, not the dual levels it has now for departures and arrivals. So long ago that the names of the airlines that can be seen on the terminal in the opening shots of the movie—Hughes Airwest, Trans World Airlines, Eastern, and Continental—no longer exist.

Some of the film’s jokes may feel dated, too. Ethel Merman plays a male soldier who thinks he’s … Ethel Merman. Barbara Billingsley, best known as the mother June Cleaver in TV’s Leave it to Beaver, appears as a woman who can speak jive and translates for two African-Americans on the plane.

Jarvis played against type, too. He calls for a taxi in an early scene and hops in while the cab driver, played by Robert Hays, runs into the terminal chasing his girlfriend—after turning on the cab’s meter. Jarvis is still in the cab as the plane takes off to Chicago with the taxi driver aboard.

In fact, Jarvis has the last line in the movie but you’ll have to wait for it—his closing line comes after the credits. The scene was filmed after midnight when the airport was asleep, not a shooting schedule that pleased Jarvis. However his line gets one last laugh from the film and continues the motif of actors playing against type. With a nearly empty airport except for cleanup crews, Jarvis checks his watch and says of the cabbie: “Well, I’ll give him another 20 minutes but that’s it!”

The joke was that Jarvis would never have stood for paying the charge run up on the meter, and everyone knew it.

By the way, Jarvis didn’t get rich off the film. His residuals came in for years afterward, with no check being more than $5.

The greatest enduring value of his appearance in Airplane! may lie in this trivia question: What was Howard Jarvis’ only movie, Ethel Merman’s last, and Mayor Garcetti’s favorite?