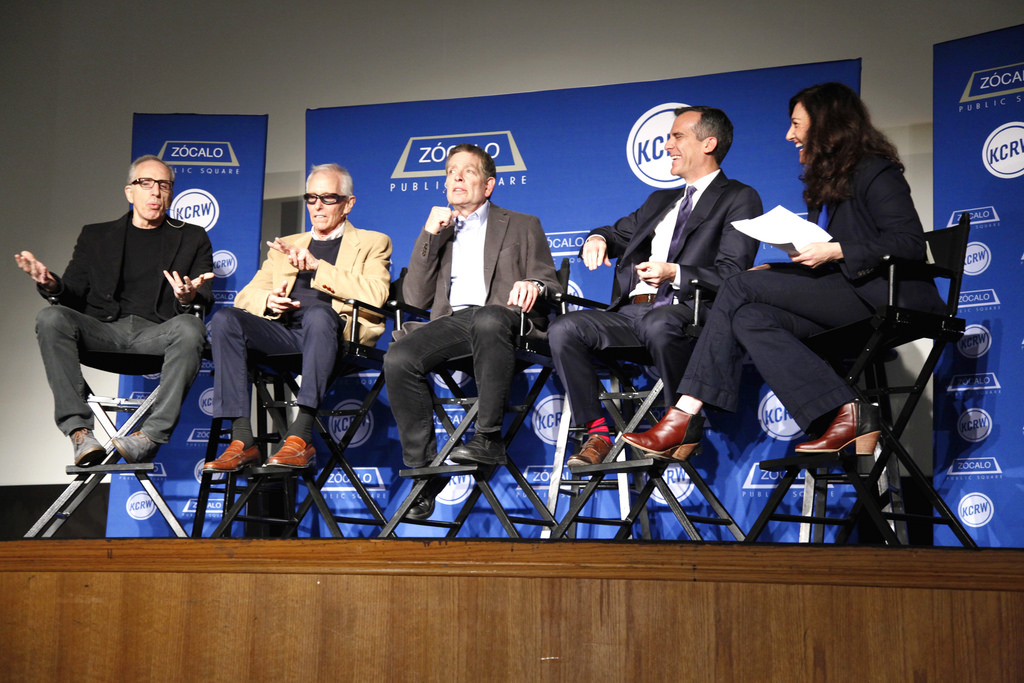 Ever wondered what makes L.A. Mayor Eric Garcetti laugh? June Cleaver speaking jive, Kareem Abdul-Jabbar as a pilot, and a bowl of Jell-O on a turbulent plane. When asked to host Zócalo and KCRW’s “My Favorite Movie” series at the Million Dollar Theatre, Garcetti chose the 1980 classic comedy Airplane!

In introducing the movie, Garcetti said that Airplane! appeals to his “goofy sensibility,” the ability “to laugh at yourself, laugh at the world.” Garcetti also chose the movie because it broke new comedic ground and because “for a 9-year-old it was an exciting movie on all sorts of levels.” And, putting back on his mayoral hat, because “it’s a metaphor for what happens when you decide to leave L.A. for Chicago.”

Brand opened the discussion by referring to one of the movie’s most famous jokes—the fact that the stewardess can’t understand what two black passengers are saying—and asked the mayor, “Do you speak jive?”

“It doesn’t seem incomprehensible anymore,” said Garcetti. He added, “There’s so many things you probably couldn’t get away with doing now” in Airplane! Yet the movie still feels fresh, he said. Garcetti said that he loves how the humor of Abrahams and the Zuckers “always seems well-intentioned” and comes from a good place.

Garcetti said that when it came time to choose his favorite movie, there was some debate in his office; people thought he needed to choose a classic Los Angeles movie like L.A. Confidential or Chinatown. But Airplane! is also an L.A. movie, he said. And it gets at some important issues of contemporary L.A. as well: “LAX hasn’t been improved since the movie,” said Garcetti.

Brand asked the filmmakers if, when they made the movie, they had any idea it would become so iconic.

No, said Jerry Zucker. “We were just excited that it did well when it opened, but never ever thought it would have this long a life.”

Jim Abrahams recalled that VHS machines were new at the time of Airplane!’s release in 1980. They won an award for the world’s top-selling VHS—with around 25,000 copies sold.

Brand asked why the filmmakers decided to cast against type, with leading men who were not known as comedians.

“It was the only way we could do the movie,” said David Zucker. “We thought comedians would ruin it.” The idea was that it would look and feel like an old movie—but with voices that had been redubbed without the actors knowing it.

The studio, Paramount, was a bit perplexed about the intentions of its three young filmmakers. But after executives watched dailies from the first day of shooting—which featured Leslie Nielsen’s most famous line in the movie, “I am serious … and don’t call me Shirley”—they finally got in on the joke.

Brand asked how Lakers basketball great Kareem Abdul-Jabbar ended up in the movie.

“That role was originally written for Pete Rose,” said Abrahams. But the movie was shot in the summer, and Rose was playing baseball, so they rewrote the part for Abdul-Jabbar.

The movie was shot on a shoestring budget of $3 million and made $80 million domestically and $80 million internationally. This was very unusual at the time, said Jerry Zucker. But Airplane! traveled well because people around the world had seen the disaster movies it spoofed.

The Zuckers and Abrahams love the very movies they make fun of in Airplane! “When we’re picking something to satirize, not only do we need to find something that we think is kind of laughable but also something that we have affection for,” said Jerry Zucker.

Turning to Garcetti, Brand asked him how L.A. has changed from the city presented in the movie.

“It was a wild time, clearly, in the ’70s,” said Garcetti. But joking aside, Airplane! reminds him of a more “free-spirited” and innocent time in L.A. Since 1980, Los Angeles has gone through “some really deep things as a city,” he said—riots, earthquakes. But before all that, “we were kind of the center of the universe, but we were also humble and anonymous.”

Garcetti said that watching the movie, and recognizing how it changed humor—creating a deadpan, fast-paced rhythm that didn’t exist before—also reminded him of the more unformed Los Angeles of his childhood.

Before turning the discussion over to the audience question-and-answer session, the moviemakers gave Garcetti a signed poster, and asked him to read the inscription to the audience.

“To Eric Garcetti, or Current Mayor of Los Angeles: We’re thrilled that Airplane! is your favorite film. On the other hand, we’re terrified that someone of that mindset is running the city.”

In the question-and-answer session, Garcetti was asked about his plans for LAX.

When people arrive at LAX, they should know they’re in L.A., said Garcetti. At the Austin airport, they have bands playing. Why doesn’t L.A. have movies playing, and local bands performing, and food trucks at the airport?

Another audience member remarked that Kareem Abdul-Jabbar is the best part of the movie—far better than Pete Rose would have been.

Abrahams agreed. He said that when he and the Zuckers talk about the movie’s success, they feel like everything fell into place. They got wonderful actors. The studio was in the right frame of mind. Released in the summer of 1980, the movie was going up against the Summer Olympics—until Jimmy Carter canceled the games. 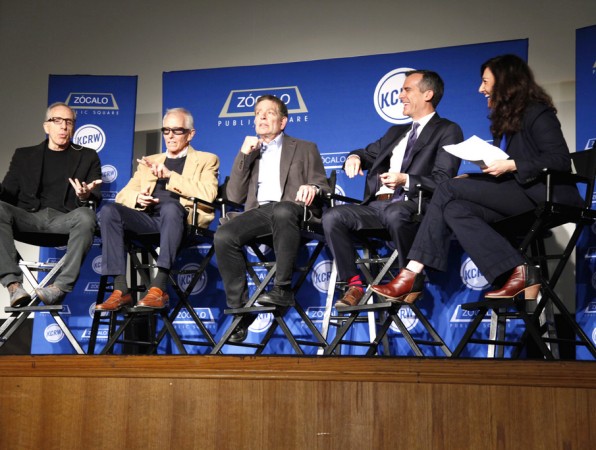 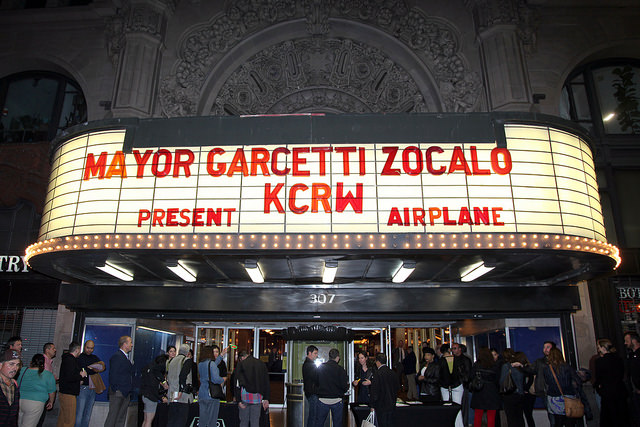 The marquee lit up on Broadway as guests lined up to see Airplane! 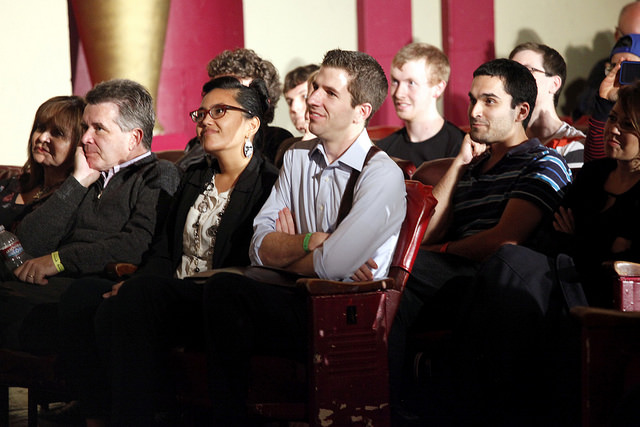 Audience members laughed through a screening followed by a lively discussion 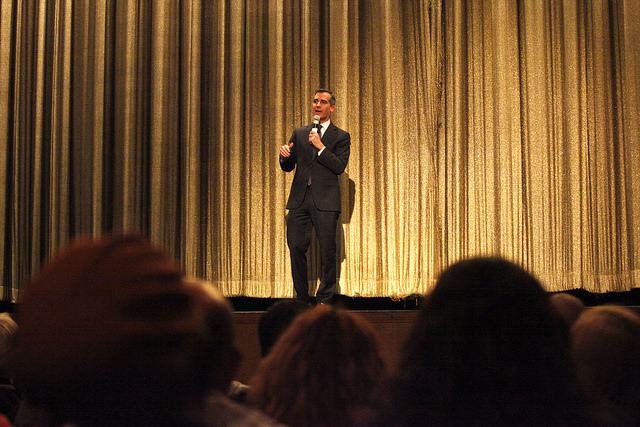 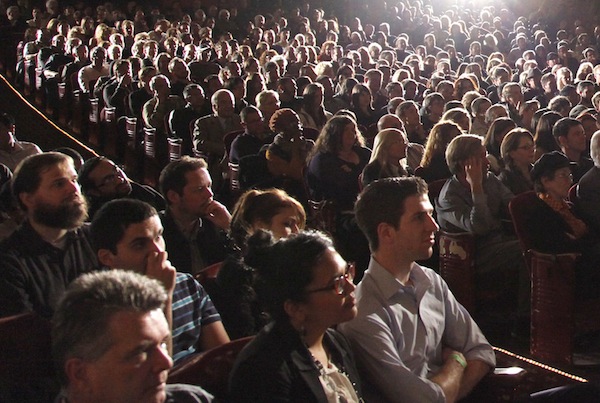 The crowd at the Million Dollar Theatre 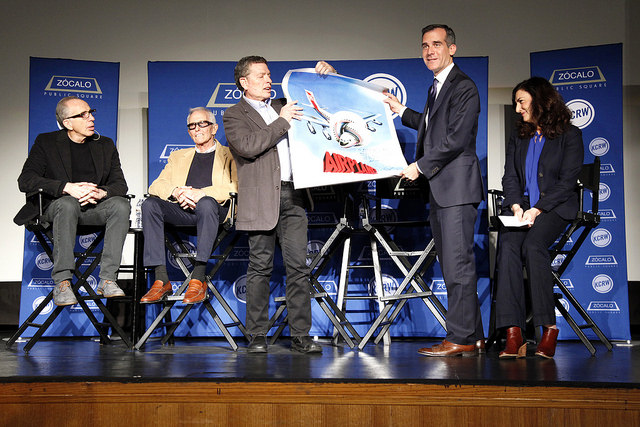