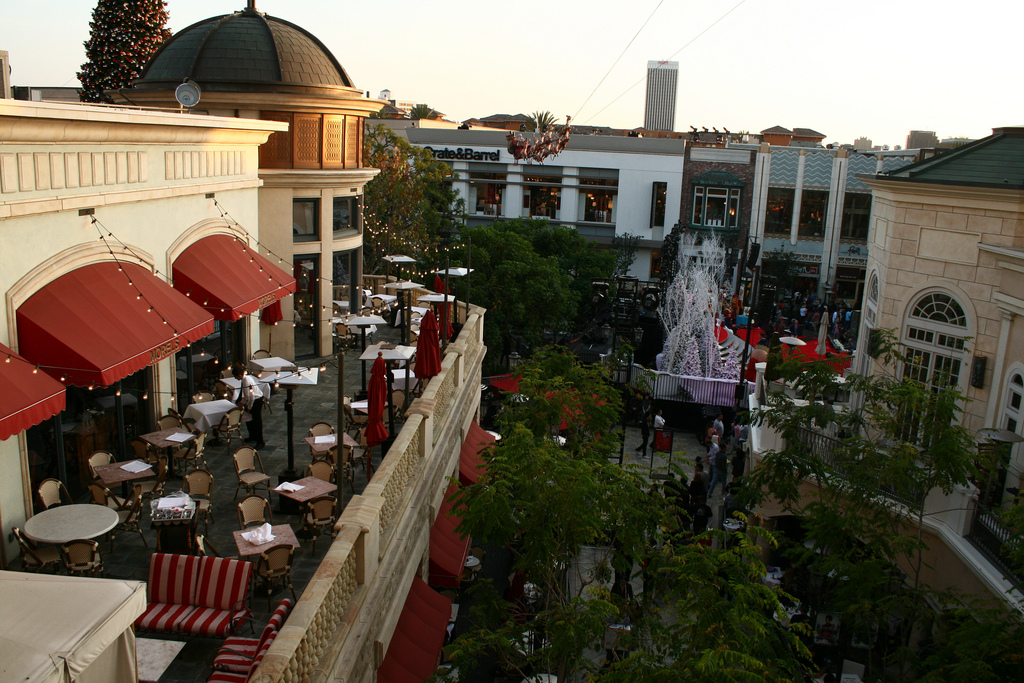 A bag of popcorn just might be the best metaphor to describe the race to represent the 4th District on the Los Angeles City Council. There are many candidates, 14 in all, popping up to represent an area that stretches (roughly) from the San Fernando Valley to Hollywood, but none of them are particularly well-known beyond the confines of campaign mailers, slate cards, and sample ballots.

Their relative obscurity is striking because the district itself isn’t popcorn—it’s lobster, in more ways than one. It is the district full of riches that out-of-towners indulge in on visits to Los Angeles, the places that define us to the rest of the world. And, when viewed on a map, it looks a lot like a lobster, too, with the irregular boundaries bestowed on it in 2011 by the Los Angeles City Council Redistricting Commission.

I lived in the 4th for nearly 20 years, just off Wilshire Boulevard in the Miracle Mile, and only recently relocated to the 2nd District in a neighborhood just west of the 4th’s northeastern terminus in Toluca Lake. Whether or not you’re one of the 4th’s quarter-million residents, in advance of the March 3 election for the district’s new councilmember, it’s a good time to take a tour of the lobster—and what it tells us about L.A.’s past, present, and future.

The 4th’s right “claw” is the San Fernando Valley neighborhood of Sherman Oaks, home of the Sherman Oaks Galleria, the mall made famous by Frank and Moon Unit Zappa’s “Valley Girl.” Head south of Ventura Boulevard (“The Boulevard”), and you’ll see stately homes that, while pricey, are a relative bargain compared to similarly sized homes back over the hill.

Connect back to the body of the lobster via Mulholland Drive, and you’re in Laurel Canyon, the bucolic hillside community that inspired many 1960s and 1970s musicians, from Jim Morrison to Joni Mitchell. The music continues as you go further east into the Cahuenga Pass, home to the legendary Hollywood Bowl, where everyone from President Franklin Roosevelt to Los Angeles’ own Mötley Crüe has graced the stage.

Northeast of The Bowl, right next to the Universal City Metro Red Line subway station entrance, is California Historical Marker No. 151. Not just any landmark, No. 151 marks the site of Campo de Cahuenga, where the 1847 Treaty of Cahuenga was signed, ending the armed conflict between the U.S. and Mexico—which led directly to California’s admission to the Union. In true Hollywood fashion, you won’t find the original adobe structure there, but a reasonable Mission Revival facsimile built in 1923.

Head up the hill—or take the Universal Studios shuttle—and you’ll be at one of the most well-known amusement parks in the country. Universal is technically in an unincorporated part of the county, where neither the 4th nor the city of Los Angeles has jurisdiction. But most tourists are very likely staying at either the Sheraton or the Hilton, both located within Los Angeles city limits—and in the sprawling lobster body of the 4th.

Just to the north is the San Fernando Valley’s Toluca Lake neighborhood, once home to Bob Hope (whose estate is up for sale for a cool $23 million). Today, it’s prized by entertainment industry professionals and New York transplants, lured by uncharacteristically large lots and proximity to three of the major movie studios: Warner Brothers, Universal, and Disney.

Move back south and east through the Hollywood Hills, and you’ll be in Beachwood Canyon with its near-perfect views of the iconic Hollywood Sign. Further east, and you hit the lobster tail: Griffith Park. More than five times the size of New York City’s Central Park, Griffith’s got three golf courses, hiking trails, pony rides, kiddie trains, softball and soccer fields, an off-leash dog park, the Autry National Center of the American West, the Travel Town Museum, the Los Angeles Zoo, a 1926 carousel, the Greek Theater, and Griffith Observatory.

South of the park lies the old Rancho Los Feliz, now the community of Los Feliz, home to spectacular Spanish Revival mansions, stately 1920s-era homes rich in red brick and period masonry, and Craftsman-style “bungalows” that at one time represented the idyllic California lifestyle. Los Feliz is also home to one of Frank Lloyd Wright’s most famous residences, Ennis House. This section of the 4th also includes the western edge of Silver Lake, the once-bohemian community now a poster child for gentrification.

The left claw of the lobster includes the well-heeled, vote-rich neighborhoods of Hancock Park, Windsor Square, and Larchmont Village. Election precinct walkers have expressed fondness for these neighborhoods, because one hardly has to glance at a “walk sheet” to determine whether a house has a registered voter. Nearly all of them do. But some of these neighborhoods have a dark history: From the early- to mid-20th century, house deeds in Hancock Park had restrictive covenants (now illegal) that prohibited home sales to African-Americans, Jews, Latinos, and other “nonwhites.”

From the mayor’s official residence, Getty House, in Windsor Square, the claw extends south of 6th Street and to the west on Los Angeles’ main street, Wilshire Boulevard. This sliver of the 4th includes the low-slung Park Mile neighborhood named for the a natural underground stream abutting area homes, and stretches south to Olympic Boulevard.

Head further west on Wilshire, and you’re in Art Deco and Streamline Moderne paradise as you enter the Miracle Mile—one of Los Angeles’ early 20th century “suburbs” once lined with department stores, from Desmond’s to Orbach’s to the May Company at Wilshire and Fairfax. One of the world’s most visited prehistoric fossil sites is also here—The La Brea Tar Pits (which conveniently translates into English as “The The Tar Tar Pits”). The Tar Pits are still a living, breathing, geological wonder, where methane bubbles out of the tar pools at all hours. Some nearby homeowners just south of Wilshire experience miniature versions of said wonders in their front yards and sidewalks, despite attempts to thwart advancing geology with strategically placed planters.

Just north of the Tar Pits is the Park La Brea apartment complex—which at one time was one of Los Angeles’ tallest structures. Home to 11,000 residents, its vote-rich population—especially among its senior residents—will be highly prized by the 14 candidates. North and west of Park La Brea are two of Los Angeles’ most popular destinations as measured by tour bus volume, The Original Farmers Market and developer Rick Caruso’s Italianate outdoor mall masterpiece, with some of the best glasswork outside of Murano, The Grove.

Though an influx of stands that feature French bistro food and Singaporean noodles have spiced up the 81-year-old Farmers Market’s fare, it’s the old standbys like Bob’s Coffee and Donuts that embody the place. The Grove’s Vegas-style water features and piped in Sinatra and Dean Martin tunes add to the shopping-meets-entertainment atmosphere that keeps customers lingering … and spending. The Grove thinks big—big enough, in fact, that its Christmas tree is 20 feet taller than the one at the United States Capitol. And who says Angelenos don’t take public transportation? Thousands of visitors each year take the free in-house trolley (modeled after the Red Cars that once crisscrossed the entire L.A. region) from one end of The Grove to the other, with its rooftop deck seats highly coveted by some 6-year-old daughters I’ve known.

The 4th is also home to the Los Angeles County Museum of Art (LACMA)—which has attracted more visitors in recent years with the addition of two popular works of public art: Michael Heizer’s “Levitated Mass” and Chris Burden’s “Urban Light.” At any given sunset, you’ll find tourists snapping iPhone shots in front of, around, and behind the 340-ton boulder that is “Levitated Mass”; come weekends at dusk, you’ll more likely than not see wedding photo sessions, modeling shoots, and tourist snapshots in and around the orderly rows of streetlights that make up “Urban Light.”

Given all the peculiarities of boundaries in Los Angeles, it’s fitting that the 4th has been represented since 2001 by L.A.’s consummate cheerleader, Tom LaBonge, a walking encyclopedia of knowledge about the city’s borders and neighborhoods. The seventh son in a family of eight boys, LaBonge has so much boundless energy he gives coffee the jitters.

Ever wonder why Olympic Boulevard is where it is? As LaBonge once schooled an audience in City Council Chambers, it’s because it used to be 10th Street, renamed Olympic Boulevard in honor of the 1932 Olympics—the 10th Olympiad—held here in Los Angeles. Ever think about why the usually staid, predictable grid of city streets sometimes splits, changes angles, or takes strange twists and turns? It’s because, as LaBonge told me on one of his frenetic neighborhood bicycle rides, the city of Los Angeles expanded in piecemeal fashion as old Spanish ranchos were acquired and annexed. Those street-splits and angle changes line up perfectly with the rancho borders, and they are depicted as faint pink dotted lines on the old spiral-bound Thomas Bros. Maps that predated GPS and MapQuest.

The candidates now vying to represent the entire lobster on the City Council in the March 3 elections are understandably talking mostly about traffic and development—the biggest concerns of the 4th’=’s likely voters. But the candidates should also be pressed to explain how they would handle the special responsibility of becoming custodian to some of Los Angeles’ greatest treasures. As Angelenos, the 4th belongs to us all.