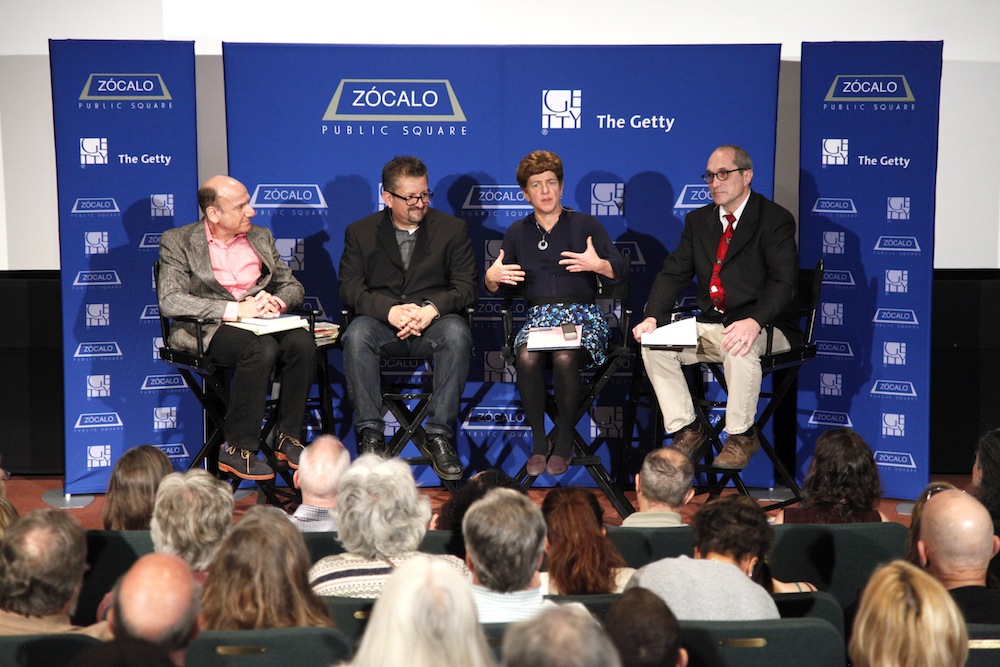 Cartoonists are propagandists and satirists, artists and writers. They make us laugh—in recognition and shame—and enrage and offend. At an “Open Art” event co-presented by the Getty in conjunction with the Getty Research Institute exhibition “World War I: War of Images, Images of War,” the many roles cartoonists play and have played over the past century were discussed and dissected.

The Getty’s Nancy Perloff, a co-curator of the exhibition, showed the crowd at the American Film Institute a selection of cartoons from World War I that appeared in satirical journals, posters, and prints. The purpose of these cartoons was to elevate a particular culture and denigrate the enemy, said Perloff. The most widely satirized figure of the war was Kaiser Wilhelm II, the German emperor. But how he was depicted differed from country to country. Perloff showed one image by a French artist depicting him in a cape, surrounded by bats; a Russian artist depicted Wilhelm writing in a black book, “I will destroy all of Europe.”

The jingoism, nationalism, and patriotism of World War I cartoons were echoed decades later, when the U.S. entered the war on terror. Marty Kaplan, director of USC Annenberg School’s Norman Lear Center and the evening’s moderator, asked Chris Lamb, author of Drawn to Extremes: The Use and Abuse of Editorial Cartoons, to talk about the role cartoonists played in early 21st century American culture and politics.

Lamb said that cartoonists fell into three camps: Some gave President George W. Bush and the Iraq invasion their full support; others wanted to hold onto their jobs and offered tepid support; and “a few brave cartoonists” came out criticizing the president and got hammered by the media.

Turning to cartoonist Lalo Alcaraz, who creates the syndicated “La Cucaracha” strip and is a writer on the upcoming TV series Bordertown, Kaplan asked if he feels as though he’s wielding or aspiring to any kind of political power or influence with his cartoons.

“I always say I do this to amuse myself, primarily,” said Alcaraz. “I have strong opinions, and that’s why I do this job. I just want to say the truth.”

Perloff and Lamb both answered yes to the question of whether cartoonists, caricaturists, and satirists have actual power. Alcaraz demurred, but then admitted that a cartoon he drew after Disney tried to trademark the term “Dia de los muertos” (of a large, skeleton version of Mickey Mouse) may have played a role in Disney withdrawing its trademark application.

Alcaraz saw the headline and posted his cartoon on Facebook and Twitter a few hours later. A few hours after that, Disney stood down. World War I artists were in a totally different place in terms of technology, said Perloff. But though immediacy was lacking, the journals in which the cartoons appeared had huge audiences. The home front was “becoming increasingly desperate” over how long the war was lasting. The cartoons “were supposed to uplift people,” she said.

But were those cartoons—and are political cartoons in general—funny? What kind of funny are they, exactly?

Alcaraz said his goal is to be “brutally funny” and “impolite.” He doesn’t draw to be offensive and get a rise out of people, however.

Cartoons are “wincing funny, uncomfortable funny,” said Lamb. They’re “supposed to wake you up and say, ‘You idiot, why haven’t you been paying attention?’”

Cartoons rely heavily on symbols to get a larger idea across. Kaplan asked Alcaraz to three of his cartoons that used the Statue of Liberty in different ways. One, explained Alcaraz, was meant to criticize Arizona’s anti-immigrant law, SB 1070, and depicted a family of immigrants crossing the border as a family of Statues of Liberty. Another, supporting the immigrant students getting an education under the DREAM Act, depicted a brown college student in a robe and graduation cap posed as the statue. The third, on gay marriage, showed two statues holding hands.

“We have to use shorthand symbols to communicate because the primary function of the cartoon is to communicate a very succinct message,” said Alcaraz. Just as Mexican restaurants use guys in sombreros with giant moustaches, cartoonists tend to use the same images over and over again.

Cartoons “can reduce a complex issue into something you can digest in just a few seconds,” said Lamb. “Some of the best cartoons are those that have the fewest words.”

Perloff said that many World War I-era cartoons relied more on pictures than words. The words offered context, but the images—which became codes, in the form of certain animals or body types representing certain countries—were crucial. “What interests me is, how long does a cartoon last? How long do its visual codes stay relevant?” said Perloff.

What happens when the state tries to push back against a cartoonist?

Lamb said that in the years leading up to World War I—the golden age of cartoons—about 500 or 600 cartoonists worked for daily newspapers in the U.S. They were split on whether or not the U.S. should enter the war, but once the country jumped into the fray, President Woodrow Wilson said that criticism was not going to be tolerated. Newspapers shut the door to cartoonists, and Congress passed the Sedition Act. About 2,000 people were indicted, and editorial cartooning was essentially shut down for the next few decades.

After the war, however, cartoonists were able to be more critical. In France, said Perloff, Marianne, the country’s emblem, appeared on a newspaper cover surrounded by wounded soldiers. A drawing of a destroyed village showed a landscape so decimated it looks “like a moonscape.”

Quoting from Lamb’s book, Kaplan said that, “An Israeli cartoonist once called the editorial cartoon the most extreme form of expression that a society will accept or tolerate.”

Alcaraz said that when he reads the hate mail he receives, he feels “I’ve already won the argument.” His image has gotten inside someone’s head—and it’s not going to come out, ever. He even professed to feeling a bit of sympathy for his detractors.

Before turning the discussion over to the audience question-and-answer session, Kaplan asked the panelists if they feel magazines and newspapers should have reprinted controversial cartoons from the French satirical magazine Charlie Hebdo in the wake of a terrorist attack.

“It was an awful thing that happened, and I felt as a cartoonist, I stand behind them 100 percent,” said Alcaraz. “However, I don’t stand 100 percent behind the material they publish.” He added that as a member of a marginalized group himself, he understands why Muslims in France—another marginalized group—are offended. He has no sympathy for the men who shot his colleagues, but he does sympathize with the Muslim community. “It’s complicated,” he said.

Perloff added that in working on the Getty exhibition, she and her colleagues were appalled at the viciousness of the cartoons. The Russians in particular had no limits and would turn the Germans into pigs and other animals. Those images, however, were internal to their nation. Now, cartoons are circulated to a global audience.

In the audience question-and-answer session, the panelists were asked if a truly effective cartoon is ever in danger of being misinterpreted.

Lamb said that in his view, truly effective cartoons shouldn’t be misinterpreted. “But that’s what makes the art form so difficult,” he said. “It requires so many skills.”

Alcaraz recounted a cartoon he drew called “How to spot a Mexican dad” that was based on his own father, and depicted a man sitting in an easy chair and drinking beers, with chorizo stains on his undershirt—with these various elements labeled with captions. Alcaraz described a pained letter to the editor from a woman who called the cartoon anti-Semitic; she pointed to 1930s Nazi cartoons showing Jews with exaggerated racial characteristics and labels.

The criticism was off-base—but both cartoons do depict stereotypes. Kaplan asked Alcaraz if he finds stereotypes to be dangerous and explosive.

Alcaraz said he tries to take stereotypes “head-on.” His mother cleaned houses, and his father was a gardener; he feels it’s his right to draw cartoons that deal with those stereotypes of Mexican-Americans. But he also feels that if a cartoon of someone with a different background rings true and he can defend it, he can draw it. “I don’t put anything down on paper that is careless,” he said. “That’s my responsibility as a writer and an artist.” 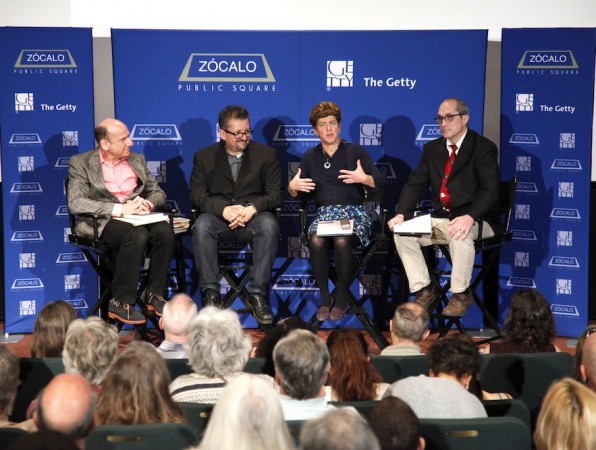 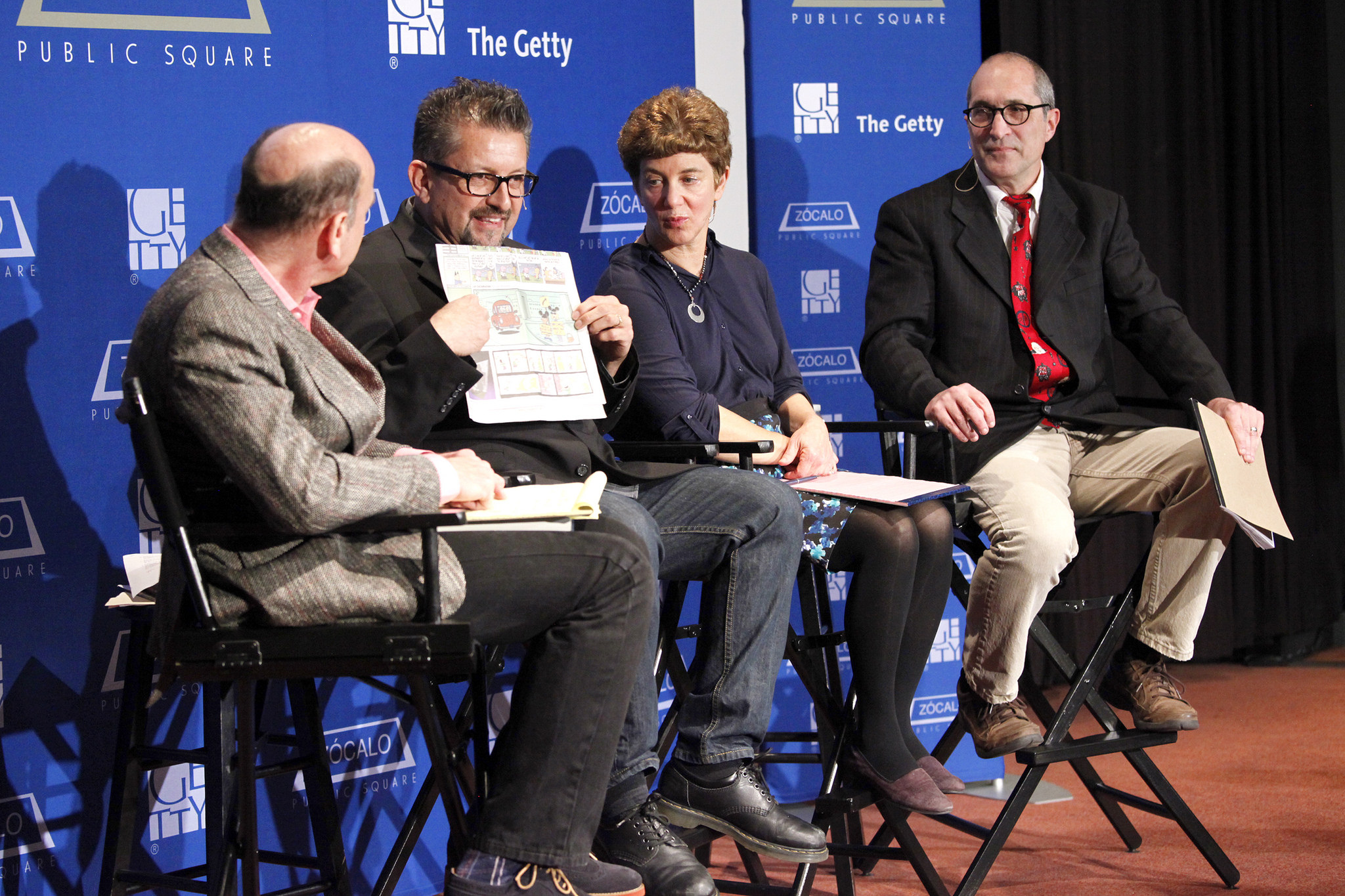 Lalo Alcaraz shows the audience one of his satirical Sunday comics 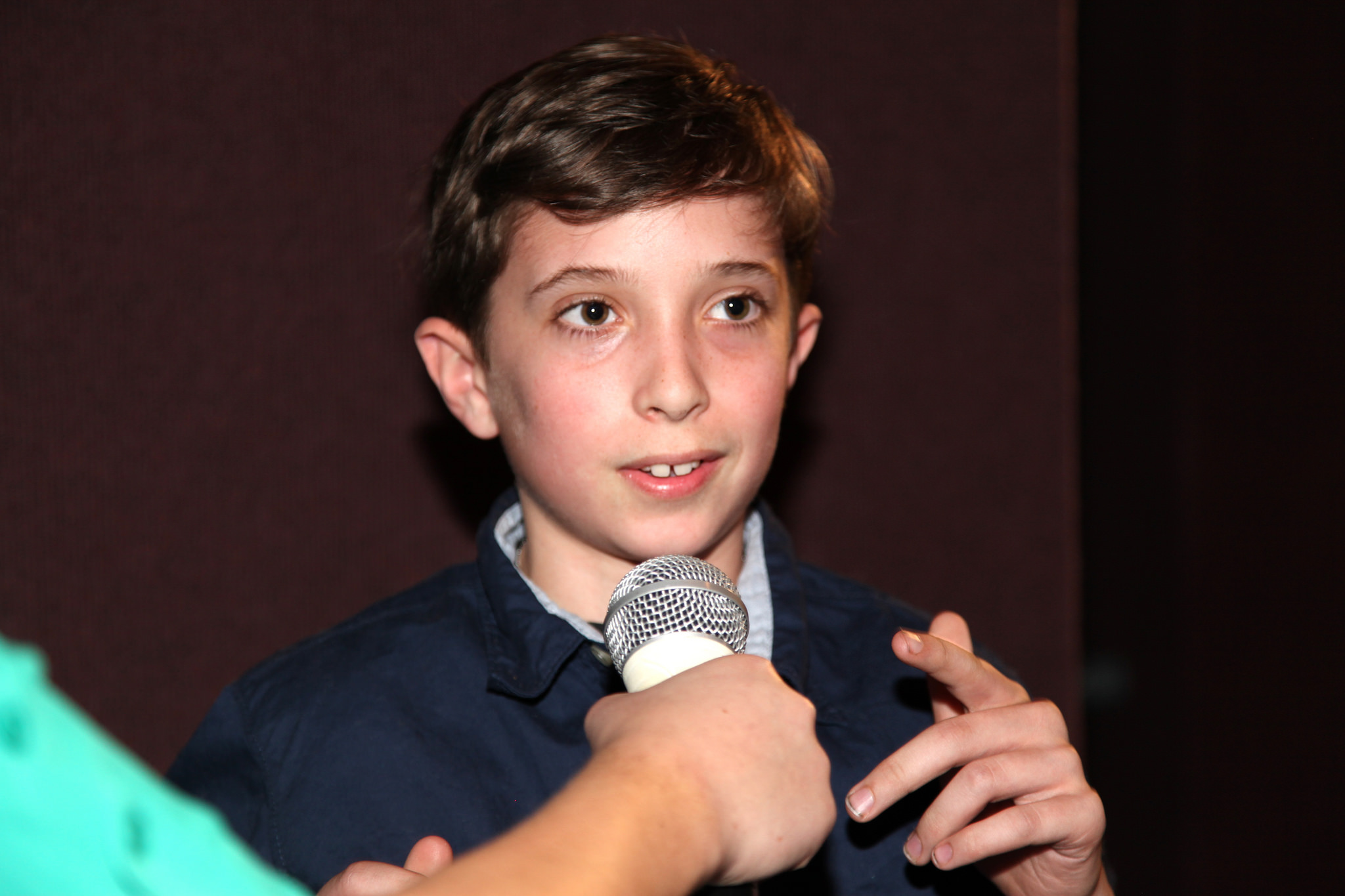 A young guest during the question-and-answer session 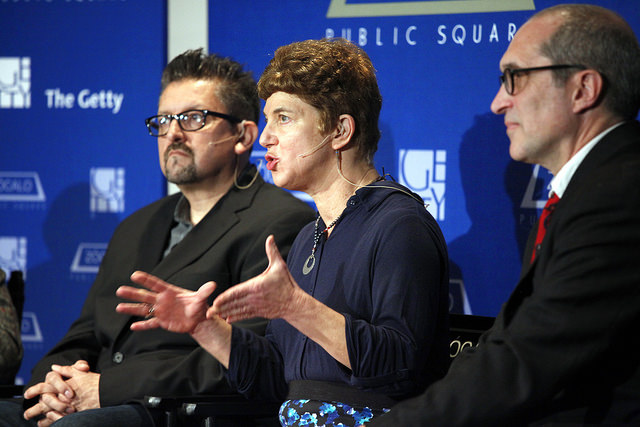 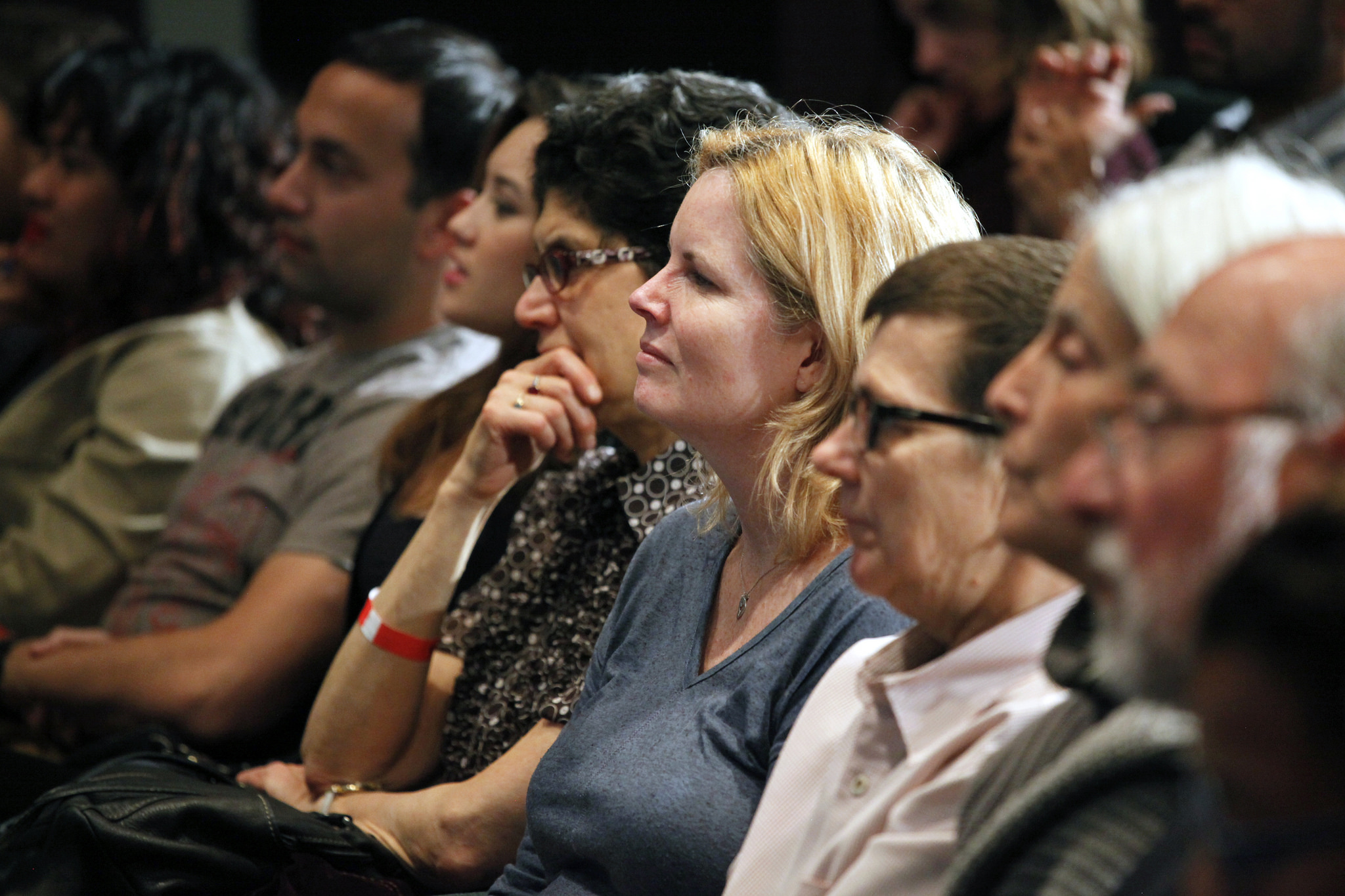 The audience at the American Film Institute 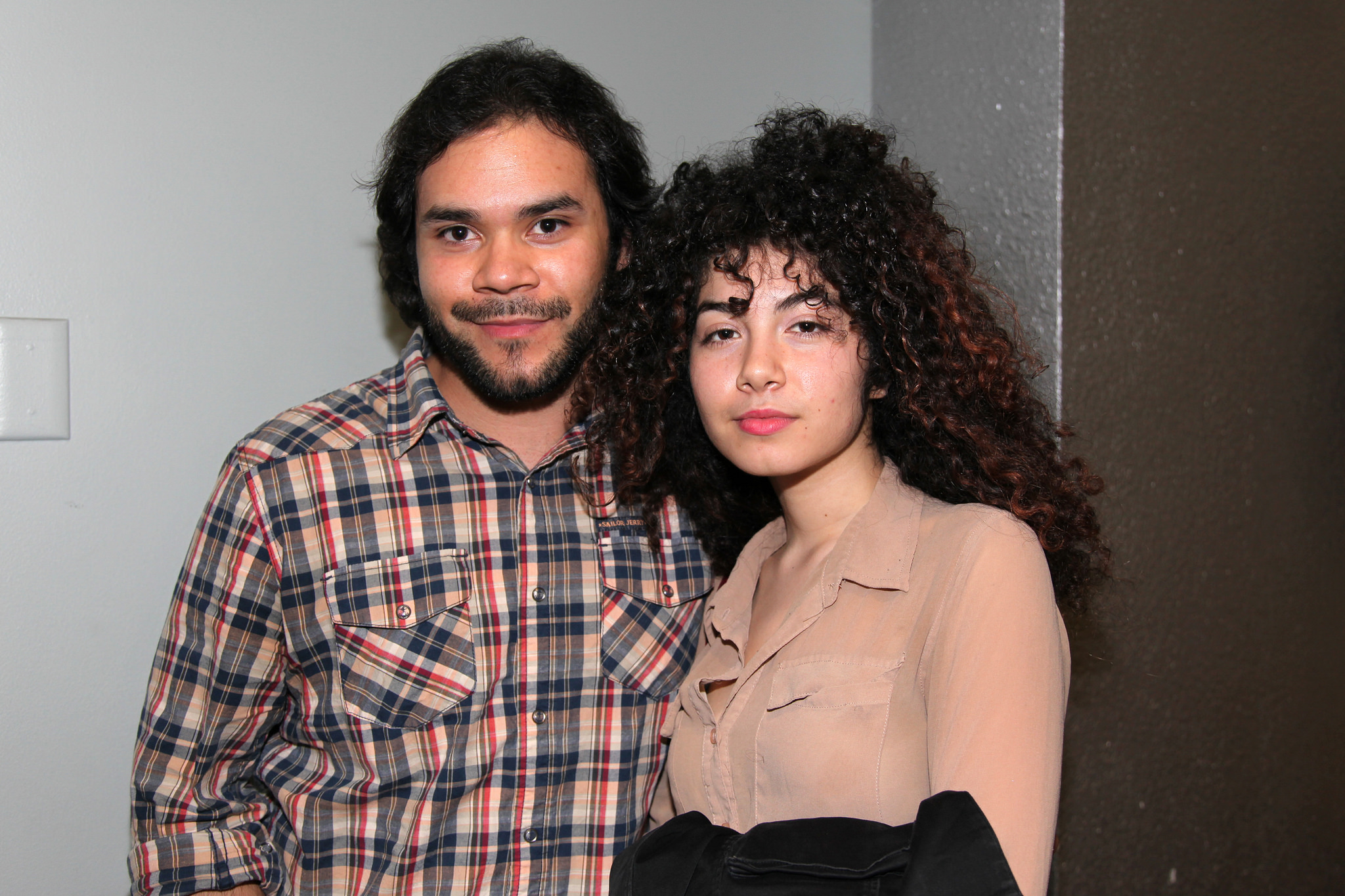