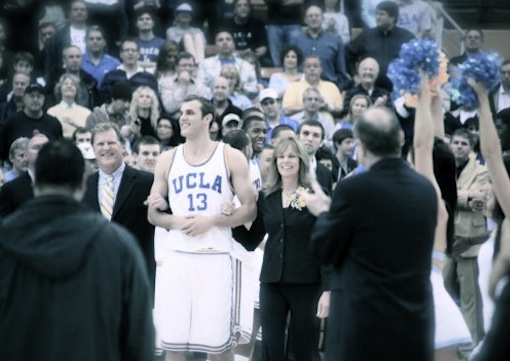 There’s nothing cool about me.

I’m a 6-foot tall gangly writer who likes to visit museums on vacation. I don’t snowboard, or run extreme triathlons, and I rarely know when the Super Bowl is on. But in 2007 and 2008, my second child, James Keefe, then a forward for UCLA’s basketball team, made it possible for me to have prime seats at one of the biggest sporting spectacles in America: the NCAA Division I men‘s basketball tournament.

For the parents of players, the tournament is true madness. I was, for a moment, the most envied mom on the block. I was a jetsetter catching last-minute flights to new cities, checking into new hotels, visiting ever-larger arenas. Friends wanted to go where I was going. I had a ticket to the Big Dance.

The first thing I had to do—as I stood in my closet on March 15, 2007 with the tournament about to begin—was figure out what clothes to pack for the first, and hopefully second, rounds. The blue and gold scarf, hand-knit by Mike Roll’s mother Joyce Roll, was a no-brainer, as was the white t-shirt with James’ number 13 hand-sequined by Lorenzo Mata’s mother, Reyna Real, and the blue and gold plastic rosary she strung for each mother. But everything else in my carry-on suitcase had to earn its spot. Deciding what to wear wasn’t about matching outfits. It was about bringing good luck. Which blouse did I wear when James scored his first Bruin basket? Which shoes did I have on when he made his first free throw?


I was close enough to the floor to see my grown child’s beard stubble, the sweat on his forehead, the Final Four patch newly sewn on his jersey.

I thumped my suitcase down the stairs singing “Mighty Bruins“ at full volume to my husband Jim who stood, hair still damp from the shower, holding out a giant mug of cappuccino. Before slamming the back door, I texted James, a long-standing game day routine. I wasn’t about to stop any ritual I’d started.

on our way! good luck in your first big dance! love you. go bruins! love my #13!

“The road begins here,” Jim said, backing the Suburban out of the driveway of our Trabuco Canyon home on the way to the airport.

With each win, we were off on a new adventure. We followed the Bruins one weekend to San Jose where the Bruins made Sweet Sixteen, and the next weekend to Sacramento where a Final Four spot would be decided.

At the time, I was in the middle of a dual masters degree program, making final edits on a full-length short story collection and weeks away from defending my literature thesis. But I had to drop all that to wear blue and gold and fist bump when my son slam-dunked. I didn’t use words that came from my other life, like bildungsroman or ekphrasis even though I saw a coming-of-age-story unfold, and art in athletes’ bodies. The only story I cared about was the one unfolding on the wooden floor in front of me and I yelled: Box out! Take a charge! Shoot! I muttered damn! at missed shots and marveled at my ineloquence.

The line between sanity and giddy stupor was crossed. In Sacramento, at the Arco Arena, the minute the Bruins beat Indiana and James ascended the ladder to snip his victory piece of the net, Jim and I booked a last minute airfare to Atlanta. All of a sudden I was singing that Jermaine Dupri song: we’re going to Atlanta where the playas play. As the UCLA band and cheerleaders had been playing and singing all year, “We’re goin to (da-do-do-doo) The Final Four!”

By this point, I’d attended 37 basketball games in four and a half months. The slightest basketball reference set off an automatic internal cheer. I eight-clapped in the shower and while waiting for my oatmeal. I wrote a poem about basketball.

Bruin fever infected other family members who booked last-minute flights to join us in Atlanta. The neighbors across the street hung a GO BRUINS! Banner between two trees.

By the time Jim and I made it to Atlanta on March 30 for Final Four weekend, I wasn’t sure if the high voltage tension inside my body would ever subside, but we were determined to soak it all in. We danced to Panic at the Disco at the special Final Four show in Centennial Olympic Park; and instead of the poet’s blouses that I favor, I wore my UCLA Keefe number 13 jersey out in public. I swore I’d never become that mom, and there I was with gold and blue cheerleader pompom tinsel looped through silver hoops in my ears.

The Georgia Dome, usually a football venue, had been transformed to hold more than 53,000 fans. That‘s more people than live in my hometown. My usual pregame relaxation routine of walking the arena perimeter was badly disrupted by the crowds, made up of many very tall men, frequently followed by kids wearing oversized jerseys of their favorite players and slurping giant sodas.

The parent section during the Final Four was the one spot where everyone understood the seriousness, the personal stakes, of what was happening. This was not mere entertainment or fodder for bets in Vegas. This was a family event for us, and it triggered memories. Of reminding my son to study spelling and vocabulary and say his prayers. Of sitting on the couch next to him when he was 5 and marveling that his feet were already almost as large as mine.

I was close enough to the floor to see my grown child’s beard stubble, the sweat on his forehead, the Final Four patch newly sewn on his jersey. Even in this giant arena, he found me. Our eyes met and I smiled. I will never forget his smile back and slight head tilt. For the first time in a very long while, he looked so small.

“Are you feelin it?” I asked when I settled into my seat next to Darren Collison’s mom, June Collison, and Deb Shipp, Josh Shipp’s mom. I desperately believed in the power of belief; if all the Bruin family would just believe deep in their true blue and gold hearts that our team would win, we‘d be unstoppable.

Jim pulled out his tiny stat-keeping notebook and black pen to keep himself busy. He believed victory happened with scoring and defense.

June and Deb were always feelin’ it too. We danced a little Soul Train dance to whatever tune was blasting over the loudspeaker before settling into our seats. So this was college basketball. Cotton candy. Dance team girls. Our band wearing goofy-looking Hawaiian shirts, playing the song, “We‘re Not Going To Take It.”

For a minute, I wished, just a tiny bit, that I was watching the game at home with my dog on the couch where I could hear myself think. It‘s only a game. It‘s only a game. But there really was no place I’d rather have been than in the middle of the maddening roar, louder than anything I’d ever heard, even louder than the MARTA train rumbling past the stadium.

No part of The Final Four is “just a game.” 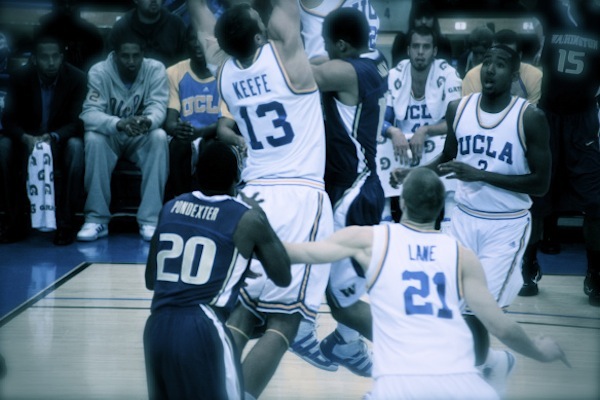 Not the tip-off. Not the split second in the middle of the madness when your team is up and your son scores two points and the Jumbotron shows that my number 13 has 2 points, while the opposite team’s number 13 has zero.

Not the end when confetti rains and parents are too stunned to speak and ticket scalpers literally crawl past security on their hands and knees up the steps of the parent section and ask if you’re selling your tickets to the national championship game since your kid won’t be playing in it.

From probably the most mainstream American experience of my life so far, I did learn that I had one extra factor of coolness. I learned that the difference between a mom fan and any other kind of fan is that a mom will always forget the outcome of the game. A mom knows deep in her heart that there is really only one way out of the madness and that is remembering the road ends not there with a national championship trophy, but at home, where she welcomes her son back with open arms.