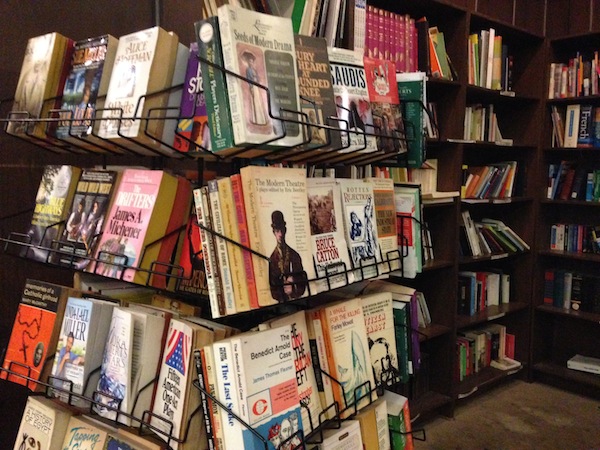 Cheap paperback books are like sex: They claim attention, elicit memories good and bad, and get talked about endlessly. The mid-20th century was the era of pulp, which landed in America in 1939.

You could pick up these paper-bound books at the corner drugstore or bus station for a quarter. They had juicy covers featuring original (and sometimes provocative) art, blurring the lines between canonical literature (Emily Brontë and Honoré de Balzac) and the low genres of crime, romance, and Westerns. Even fairly tame cover images grabbed attention. The Unexpected!, Bennett Cerf’s 1948 collection of “high tension stories” for Bantam Books, featured a cover by artist Ed Grant of a woman and a man—both in proper suits, though hers is flaming red—standing horrified in front of an open trapdoor. It hints at the thrills within.

Paperbacks went beyond lurid fiction. They brought high culture and scholarly nonfiction to readers, covering every conceivable taste and topic, from anti-Semitism (James Parkes’ 1946 An Enemy of the People) to works by diplomats, philosophers, physicists, anthropologists, even Sigmund Freud and Stendhal.

At 25 to 35 cents a pop—wages for a night of babysitting or the cost of a pack of cigarettes— paperbacks could be had by anyone, and so enabled teenagers and poor and working people to enter fully into the cultural landscape. Irving Shulman’s The Amboy Dukes was passed among Brooklyn street kids who emulated the gangs rampaging through the novel; bored housewives whiled away hours in suburbia minding house and children by reading paperbacks they picked up at the grocery store. In the 1950s, these books created secret communities of readers who fashioned identities through ownership; women in rural America might come to recognize themselves as lesbians after finding Women’s Barracks by Tereska Torrès on a candy store rack; would-be intellectuals could glimpse William Gaddis’ postmodernism in the New American Library’s New World Writing collection.

Unlike other forms of mass media that could be consumed at home—radio and later, television—paperbacks offered more than ephemeral content. Compact enough to carry anywhere, they were total packages, providing content not only through the text in their pages and illustrations on their covers, but also as objects. The books’ shape, smell, feel, even the sound of their cracking bindings helped to create a rare sense of connection among readers, booksellers, publishers, and authors. E.L. Doctorow, who was an editor at New American Library before becoming a published author, remembers his first deep reading experience plowing through the first 10 PocketBooks published in 1939 while he languished in a hospital bed recovering from a near-fatal disease.

Paperbacks could be serious business. In His Eye Is on the Sparrow (1952),Ethel Waters told her story of fighting against racism, poverty, and abuse to become a breakthrough singer and actress on Broadway and in Hollywood. Declaring her birth, “October 31, 1900, was the date, Chester, Pennsylvania, the place, which makes me, I trust, an American citizen,” she connects her life to that of the century and the nation, making clear that by 1951, even before Brown v. Board of Education, a poor, black woman claimed full citizenship in this country. Daphne Rooke’s Mittee (1953) unveiled South African apartheid through an interracial love triangle involving a white man, a white woman, and her mixed race female servant. The book included a glossary of Afrikaans terminology for U.S. readers to enlarge their vocabulary and open their eyes to distant parts of the world.

Since the publication of my book America Pulp: How Paperbacks Brought Modernism to Main Street, I have had the moving (and somewhat bewildering) experience of hearing very personal stories that confirm my argument about how paperbacks permeated daily life. Dozens of people—total strangers, long-ago boyfriends, friends of friends, collectors, bibliographers—have written me emails and letters, and sent me packages containing pulp pulled from their shelves.

I recently received an email from one reader, who wrote about her relative, Jack Nemec, an immigrant who wrote a dozen kinky titles, including Sin Caravan, The Spy Who Came to Bed, and The Darkest Urge. She learned about these books after his death; some relatives are a “smidge embarrassed that we have a ‘porn’ writer in the family,” she wrote—in fact, they threw out all his books after he died. Nemec’s books are hard to come by these days; she has read only one, Is She a Dyke? Her email concluded that she is a “bit proud that we’re a part of this little part of Americana.”

Her pride zeroes in on the crux of what pulp meant in the middle of the 20th century—and how we might understand it now. These books are a little piece of Americana; they linked the midway to the bedroom. The plot of Nemec’s Easy Sue—there’s one copy available on eBay—features an enormous woman who finds fulfillment working in a carnival where she meets the human giant; he’s well endowed. And yet the book’s design—its sleazy cover andhandy shape—resembled the cover of William Faulkner’s novel The Unvanquished. Appealing to every taste, paperbacks were (and still are) trafficked—bartered, bought, exchanged, sequestered, hidden, destroyed … and loved. Because they carry traces of both the illicit and aspirational, they figure as distillations of America’s various dreams.

Pulp elevated working people into writers and collectors and was a quirky means for immigrants to assimilate to American culture. A rural Midwesterner moved to New York City and found paperbacks were the vehicle for his social mobility. The man’s daughter, who lives in the Netherlands, sent me a copy of his memoir. Karl Zimmer became “a Johnny Appleseed from the Heartland [who] spread American books across three continents.” In the 1950s, he drummed Ian Ballantine’s paperbacks to booksellers up and down Manhattan while working “a night job operating a machine that extruded insulation onto electric cable at a factory in Brooklyn.”

Hawking paperbacks was an uncommon route out of the Midwest and into pulp; most entered as consumers, picking something off a rack. A New York artist described in an email how she remembered her parents’ bedroom side tables filled with paperbacks. They bought the books at Pete Bianchi’s soda fountain and tobacco store in Ohio, “where our father used to take us kids for comic books and treats, and where he could peruse the rotating shelves of pulp mysteries.” Those drugstore visits to find books that were unavailable at the local library still inhabit readers’ memories. Encountering pulp was a family affair, undertaken together, in plain view, not hidden in a plain brown wrapper as Nemec’s novels surely would have been. Those books were a part of the landscape of Smalltown, U.S.A. They made us who we are: a pocket-book nation.

Cheap paperbacks helped to forge modern ideas about race, sex, war, science, and much more. During their heyday from the late 1930s to the late 1950s, pulp spread the practice of everyday reading, bringing to a mass audience of avid readers—everything from smut to theology; from whodunits to Macbeth. Paperbacks ’R’ Us.