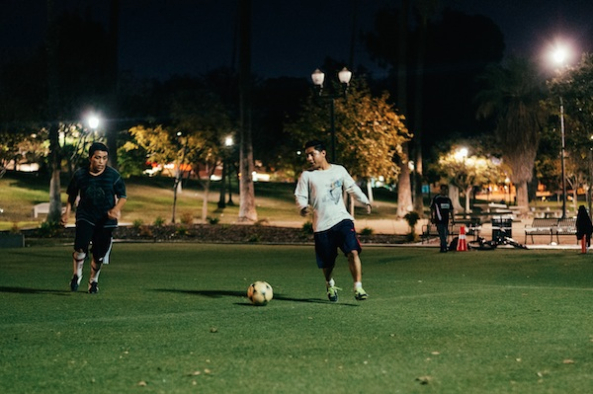 5:46 a.m. Soccer in the near dark. The camera makes it look brighter than it was. 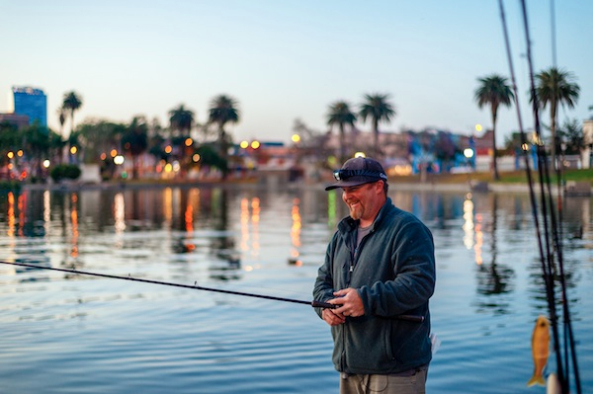 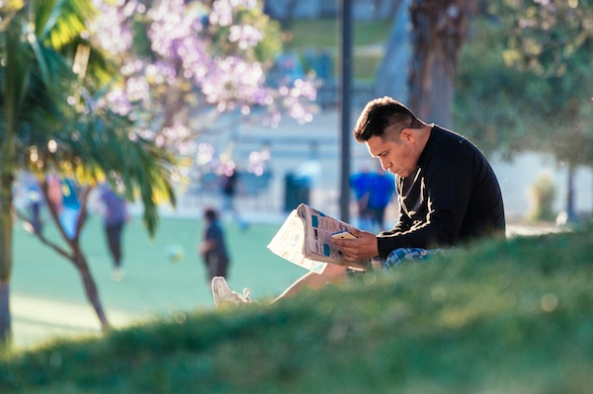 7:22 a.m. A very pleasant morning on the slope next to Wilshire. 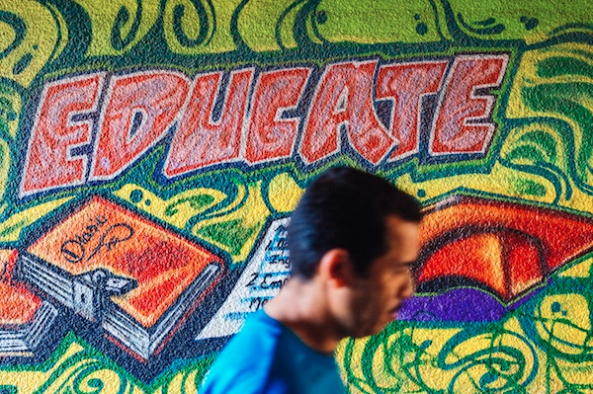 9:13 a.m. The murals in the pedestrian tunnel under Wilshire. 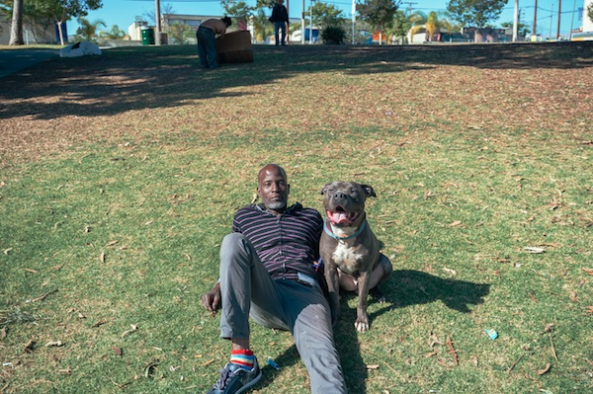 9:38 a.m. Rodie the pit bull was recently reclaimed by his owner from the pound. It\'s a long story. 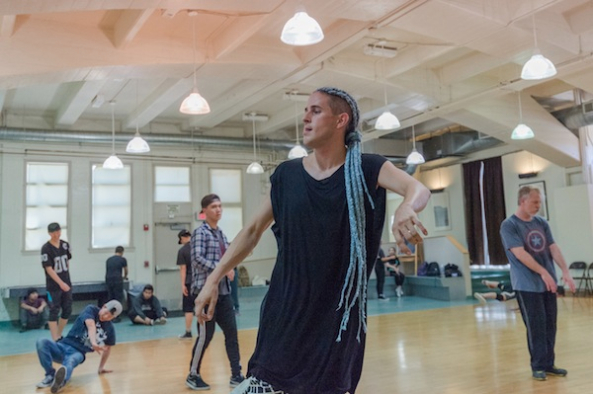 1:17 p.m. Oz works on his hip-hop moves at the park\'s rec center. A nonprofit called Juice brings in the DJs. 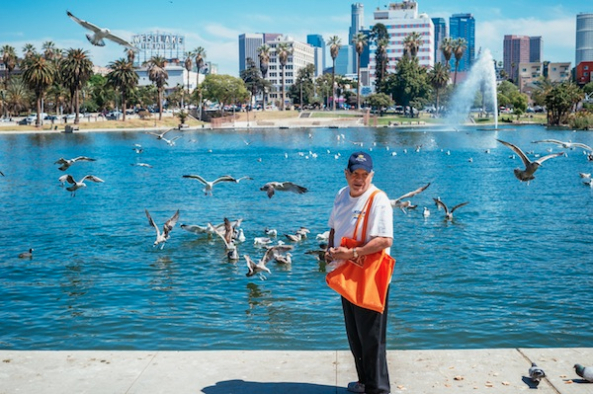 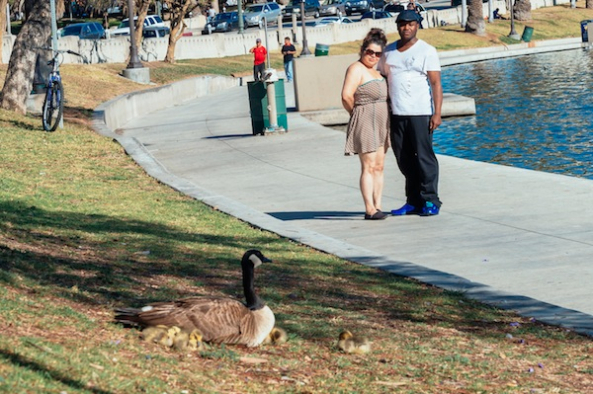 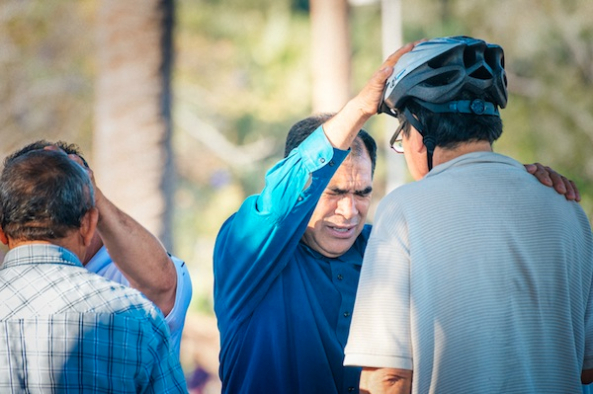 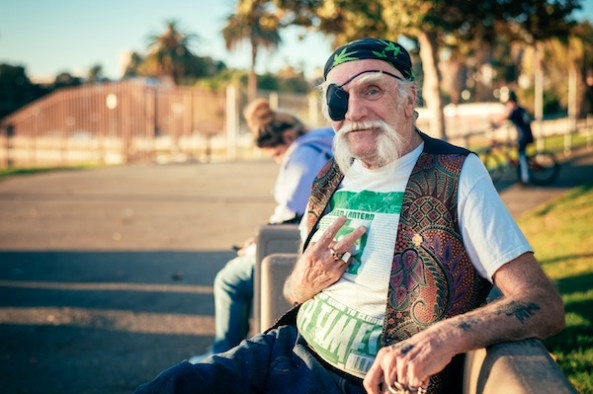 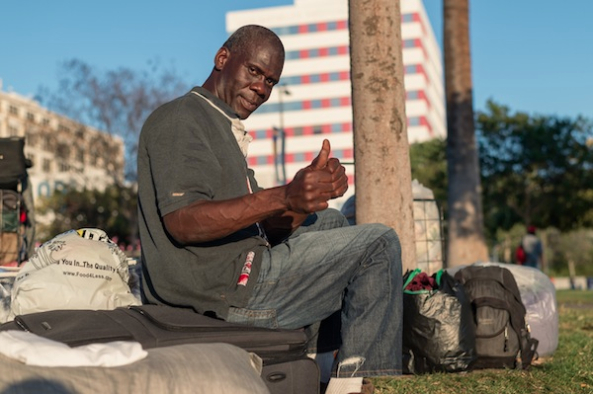 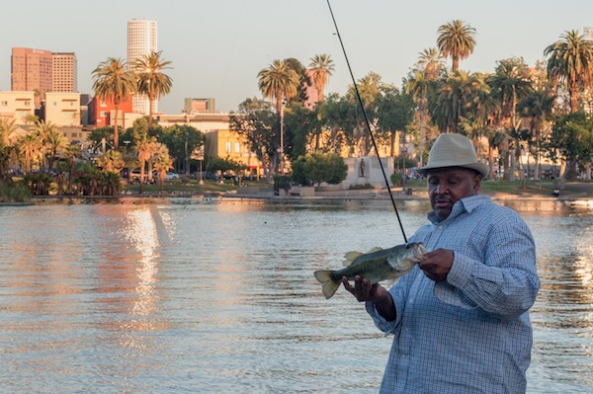 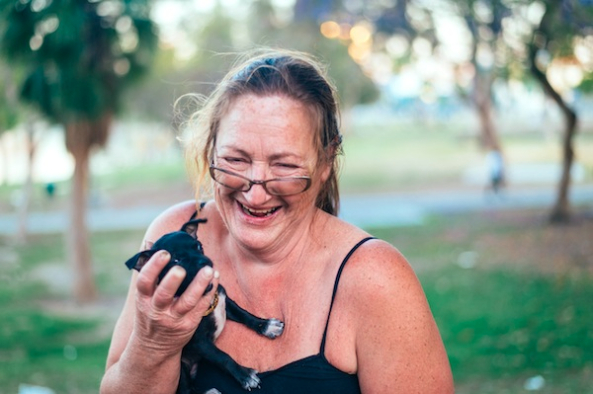 7:07 p.m. Tonya and her teacup chihuahua live in a motor home parked that day at MacArthur.

At 5:15 a.m. on a recent Saturday in early April, light was just beginning to creep up from the horizon at MacArthur Park, in the urban heart of Los Angeles. A bunch of guys were playing soccer, chirping at each other in Spanish. The only illumination came from sidewalk lamps and a full moon dimmed by a lunar eclipse.

The astroturf soccer field is the park’s lone playing field and shaped as if a rectangle had been mated with a peanut. The west goal sits on decidedly lower ground than the east goal, putting the team headed in that direction at a decided disadvantage.

The game broke up a few ticks shy of six o’clock. If my Spanglish was accurate, the guys playing had either gotten off work earlier in the morning or were just headed to their jobs. They hopped in cars parked on Wilshire Boulevard and were quickly replaced by another set of fútbol players.

I’ve visited MacArthur Park a handful of times in recent years with my camera. It is an absurdly photogenic place with its mix of people, skyline views, the lake, and whatever other surprises it offers up. On this visit, I went all in and stuck around from sunrise to sunset.

The park is a lot of things, many of them contradictory, and subject to change. It’s scruffy, bucolic, exposed, shady, peaceful, and very busy. By L.A. standards, it’s also very old—it dates to the 1880s but didn’t pick up its current name until after World War II.

The best description of the park I’ve heard came from a guy named Dave whom I met when he was fishing for largemouth shortly after dawn. The bass were spawning in the shallows. These were surprisingly large fish. As he dropped his line into the murky water in search of bass that were surviving and—apparently thriving—in the shadows of downtown, Dave described Macarthur Park as “a diamond in the rough.”

The park’s Westlake neighborhood isn’t as shiny or vertical as Koreatown to the west and DTLA (as the boosters like to call downtown) to the east. It is old, squat, pastel, humble, low-income, and dense. During the last week of March—the latest statistics available on the L.A. Times neighborhoods website—there were 24 violent crimes and 35 property crimes in Westlake, a higher rate per capita than most surrounding neighborhoods. In January, a body was found floating in that very lake where Dave was fishing.

On the day I visited, trash was everywhere, despite the frequent presence of trashcans. City crews, to their credit, sort of tidy things up in the morning—but they’re also engaged in a long-running war with the bird poop that encrusts so much of the place. More troublesome is the not uncommon public urination, perhaps due to the park having exactly three toilets, which are always occupied.

But that’s not the entire story of Macarthur Park.

When I went to plug a parking meter, I met an old guy doing the same. His apartment lacked air conditioning and it was hot out. So he drove to the park for some fresh air. Later I met a woman originally from Oklahoma there for similar reasons: the park was a nice place to park her home—a small motor home—for the day.

With my Nikon, I tried to capture the convergence of all these people who came to Macarthur Park that day looking to address some need: the homeless guys (and gals), the joggers, the walkers, the families, the street preachers, the anglers, the hipsters, the sidewalk merchants selling everything under the sun on Alvarado Street.

As the sun began to set, a guy who called himself Porkchop finished what Dave started earlier in the day: Porkchop caught a big largemouth. I was impressed. Porkchop was not. He quickly unhooked the fish and tossed it back into the water.

“I’ve seen bigger than that,” he said, providing the day’s final surprise from MacArthur Park.