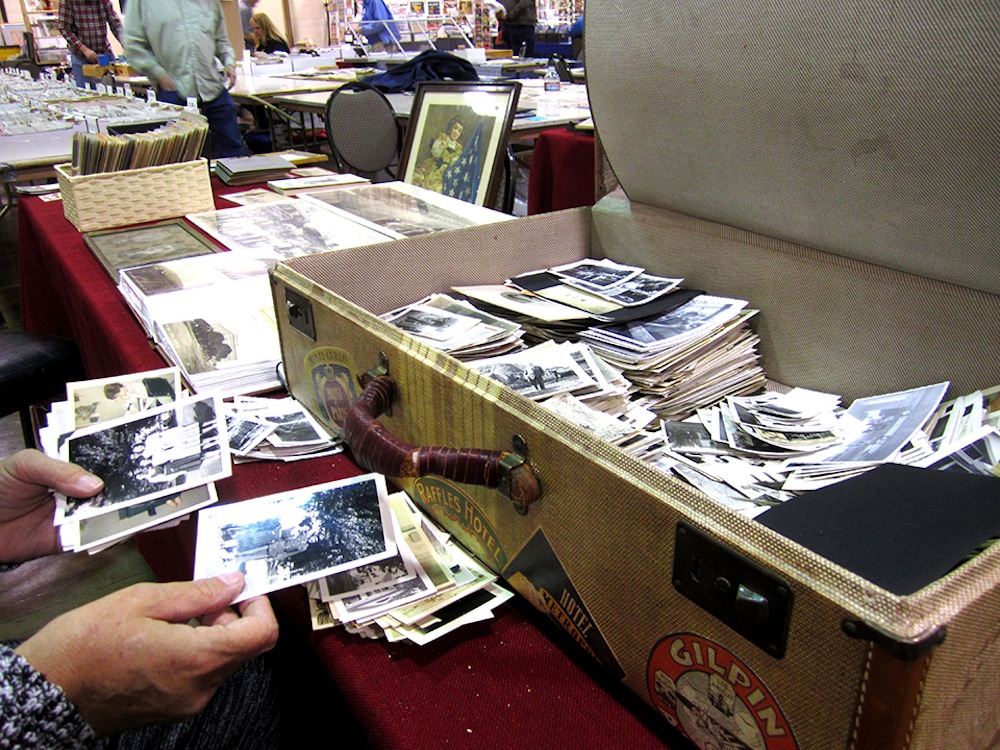 Most people collect things, whether it’s casually or compulsively. You might accumulate many pairs of a favorite brand of shoe. Or you might be a Deadhead on a mission to stockpile Jerry Garcia bootlegs.

My own collection consists of unique items that are very personal, though they’re not an actual part of my life. I collect what’s known as “vintage ephemera”—postcards and letters, photographs and newspapers, calendars and maps, baseball cards and paper dolls, and even birth announcements and death certificates. These are written or printed items that, according to the Oxford Dictionary, “were originally expected to have only short-term usefulness or popularity.”

I offer my own definition that might help to explain my interest: Ephemera are curious and beautiful remnants of the past. One example from my collection is a letter sent by a widow to the officer who was at her husband’s deathbed when he was shot during the First World War.

When someone passes away, we assume that the surviving family will be responsible for their possessions. But often the families are estranged or the deceased leaves behind major debt. In those cases, the belongings are sold at an estate sale, storage units are auctioned to strangers, and the rest ends up on the dusty shelves of the Goodwill. It is not by accident that every thrift store has the same pervasive air of melancholy. I like to think that the objects I collect are being spared that injustice.

My interest in ephemera began when I bought an old photo album at the Rose Bowl swap meet in the early 2000s. As a visual artist, my original intent was to use old photos in my mixed media sculptures. But I found myself fascinated by these windows into another time. A dealer at the swap meet told me about an even bigger treasure trove of these kinds of items at Hal Lutsky’s Vintage Paper Fair, which was held in an Elks Lodge in Pasadena at that time. I’ve been going to the vintage paper fair ever since.

These days, the fair features about 40 dealers who set up on folding tables in the Glendale Civic Center’s main room three times a year, including this coming May 16 and 17. Some specialize in one particular type of ephemera, such as restaurant matchbooks or Stereoviews, but most bring a wide variety. The prices can run the full gamut; a box of 25-cent photos might be displayed next to a single framed image worth hundreds of dollars. 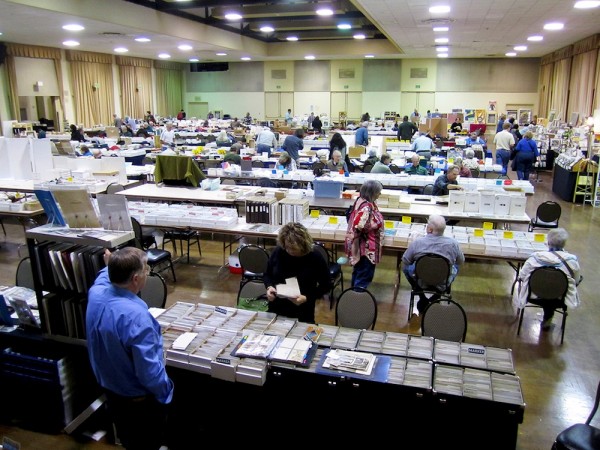 Sherry Sonnett is a regular dealer at the fair. She accumulates her inventory of vintage valentines, sheet music, turn-of-the-century nude photo postcards from France, and other items at estate sales and through other dealers. It was through Sherry that I found love poems written by Private Edward Howard for his wife Dorothy every day he served in the Army during World War II. It was in this package of writings that I found a letter addressed to the couple in 1942, just after they lost a newborn daughter a few weeks earlier:

Dear Ed and Dorothy, Florence has just called me on the phone and has told me of the receipt of the telegram telling of the passing of your little baby. I am sure I don’t need to tell you we are both thinking of you constantly and send our sincere sympathy for your loss. Having passed through the same experience while we were living in New York, we know something of the problem that you face. It’s good at these times to have something to hold on to and to be able to know such problems as this do not represent the truth; to know that Life really is without either beginning or ending and that, despite the evidence that is pouring in on you, you really have lost nothing but that your little girl still lives. I know that such things are difficult to see at such times but, despite this fact, they are true—absolutely true.

The letter is a reminder of how harsh reality can be, and that, with all of our social and scientific advancements, the only cure for sorrow is still simple human compassion. Every time I read this letter, it reminds me to appreciate all of the good things in my life.

Steve Bannos has been selling vernacular photographs (photos of everyday life taken by non-professionals) on Ebay since 1997. The people who collect vernacular photos are very specific in their interests—they focus on a single subject like shadows, men wearing hats, or photobooth images. Steve met his wife when she purchased photos of watermelons from his website. One unique image I bought from Steve was a snapshot of an old man standing alone with the words “Whitey—1948, three years before he went blind” written in the back.

Gail Pine, a Santa Barbara artist who also uses vernacular photos in her artwork, often sits next to me as we methodically dig in the fair’s discount bins. These bins hold thousands of photos or postcards priced at a dollar each or less. Even when they’re slightly out of focus or badly framed, Gail describes the photos she collects as “wonderful random mistakes.” Like many collectors, she wonders about the faces of the people in the photos and if they’re still around. A few years ago, she was in a thrift store in Arizona and found a picture of her own grandfather who had long before passed away. It seems that every dealer or collector has a similar story. 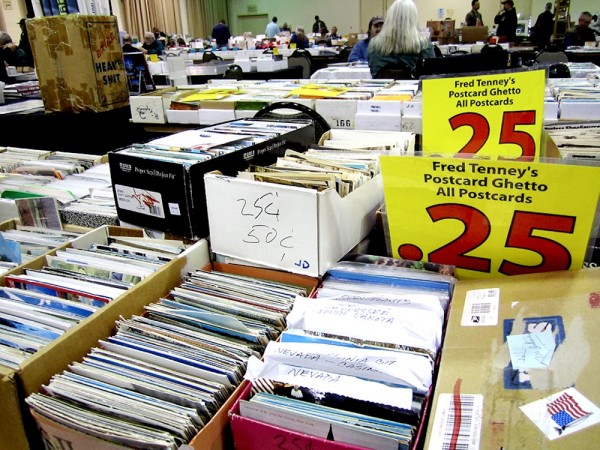 I’ve never come across an old friend or relative in a vintage photo, but I did feel a connection to the man who had saved a package of literary rejection slips that I found. Like that budding (and unsuccessful) author, I submitted short stories to dozens of magazines when I was younger—and was never published. Some of the magazines he was rejected from back then still exist today—and they rejected me, too. Apparently the editors didn’t enjoy my work anymore than they did his.

Fortunately though, the people whose lives I glimpse through my collection have occasionally been blessed with happy endings. Mrs. Cora Taylor of Oxnard, Calif. must have been heartsick when she received a telegram on March 26, 1967, that informed her that her husband Sgt. Hershal Taylor was placed on the seriously ill list in North Vietnam because a grenade sent shrapnel to his head and chest. “His condition is of such severity that there is cause for concern but no imminent danger to life,” the telegram concluded. 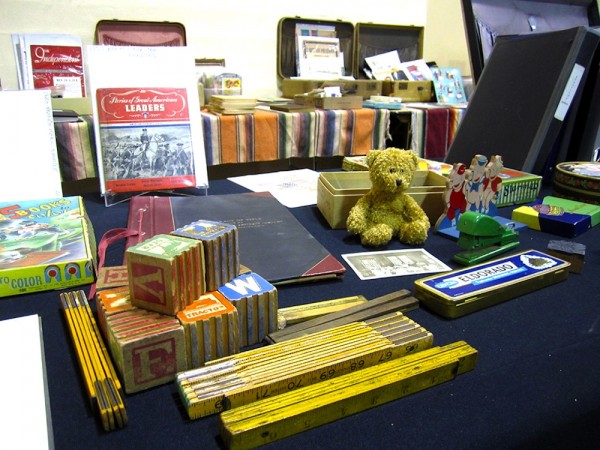 I am pleased to inform you that your husband Sergeant H. Taylor has been removed from the seriously ill list. Since his condition is no longer considered serious, no further reports will be furnished. I share our hope that he will have a complete and rapid recovery.

The telegrams are old and brittle and I have to be careful when I unfold them. I have no idea how things turned out for Sgt. Taylor and his wife. But I every time I read them, I try to imagine her face as she read those words. Not everything I own is sad or bittersweet. There is a lot of humor and nostalgia in my collection. But it’s the hunt for the special things, like the two telegrams, that keep me coming back to the Glendale Fair.