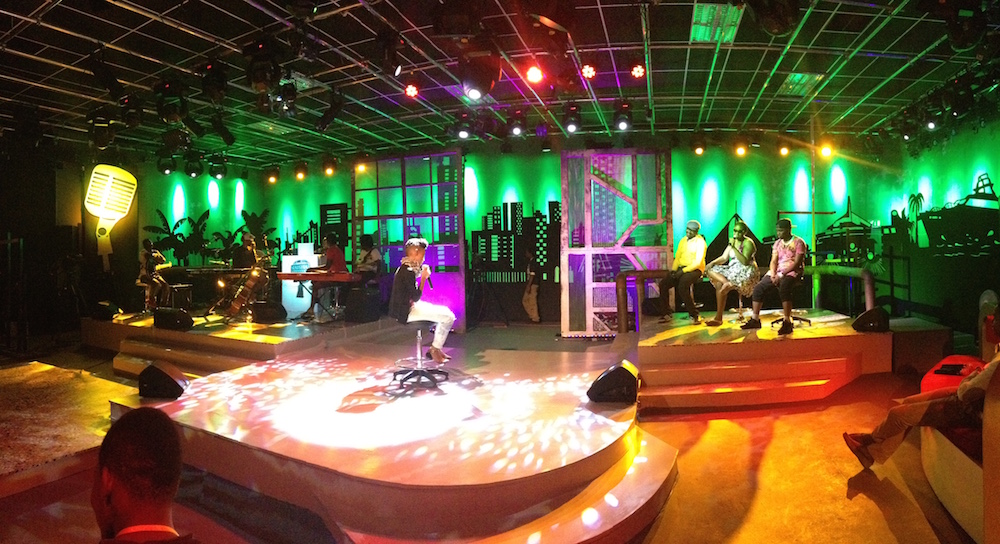 Six blue-masked doctors in white coats stood before us, each monitoring an infrared detector, checking for signs of fever in travelers. It was late February, and I had just arrived at Nairobi’s Jomo Kenyatta International Airport, where I was greeted with an Ebola screening. Unlike many of the people deplaning with me, I did not come for a safari, or a post at an embassy, or to work for a non-governmental organization. I was hired to be the studio producer for an East African music talent contest show called Maisha Superstar.

Along the lines of American Idol or The Voice, this show was searching for—and helping to mold—the next big pop star from a region that includes Kenya, Uganda, and Tanzania. With Idol suffering from declining ratings and set to end next season, execs looking to make talent competition shows compelling would do well to look to Nairobi.

I’ve been working as a record producer, recording engineer, and mixer for nearly 20 years in L.A. I’ve never really watched TV talent competition shows in the U.S.—the music isn’t that engaging, they create false game-show drama to boost ratings, and they aren’t even effective in finding successful music acts. So why was I there in Nairobi to produce the studio recordings that would accompany a TV talent show in a country I’d never been to before?

It wasn’t for the money. The budget for our show was about 1/30th of American Idol or The Voice. I could have made more if I’d stayed in Los Angeles grinding out smaller gigs.

The answer: Eric Wainaina. We had been classmates in the late 1990s at Berklee College of Music, though barely acquaintances, then. He became a Kenyan superstar in 2001 when he released the song, “Nchi Ya Kitu Kidogo” (“Country Of Bribes”). It was a scathing indictment of governmental corruption in a country that had been effectively ruled by one party since its independence in 1963 until 2003.

Officials banned Eric’s song from playing on the national radio station. Police followed him. When invited to play at the national Kenya Music Festival, where the then vice president would be in attendance, Eric was harassed on stage. A reporter for the BBC interviewed Eric after the show and helped shine an international spotlight on Kenya’s democracy movement.

Sitting at home in Los Angeles, I heard that BBC interview one night. Here was a man who was using music not only for entertainment, but to create a different future for his country. I added a goal to my career to-do list: “Work with Eric Wainaina.” It took 11 years, but I finally got in touch with Eric in 2012 and I produced a re-mix of his song “Selina.” It would go on to become a huge regional hit.

Eric became the music director of Maisha Superstar, which was named after the show’s regional satellite network broadcaster, Maisha. Eric invited me to be the studio music producer, primarily responsible for making the recordings of each week’s songs to release online. 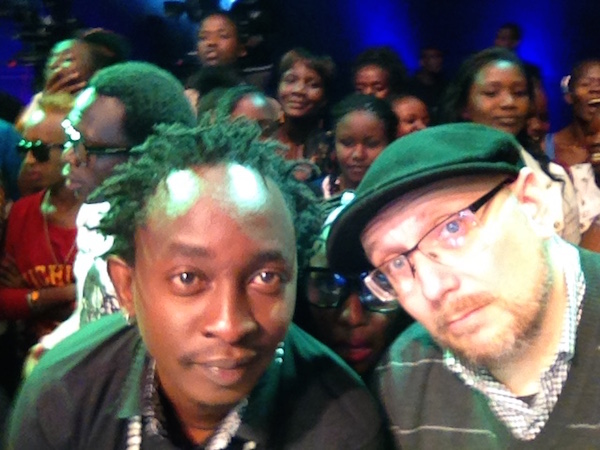 Eric Wainaina, a Kenyan pop star who served as the show’s music director, and the author

Viewers of any singing contest show will recognize the basic outline: auditions, performances, eliminations. At the beginning of each season, American Idol uses cattle-call auditions in several cities around the country so their panel of judges can select between 10 and 13 virtually unknown finalists. In contrast, we began with six successful “mentor” musical artists (two each from the three participating countries, which created a friendly regional rivalry) who searched their country for talent. By the end of the third episode, each of these mentors picked one “rookie finalist” to bring with them to Nairobi for the final nine performance shows.

Similar to The Voice, the rookies worked with their mentors through song choices, performances, arrangements, leaned on them for moral support, and had a week to work on new songs before the next episode. Unlike The Voice, each mentor had only one rookie artist and was fully invested in his or her development. Each pair worked as a team, but ultimately the rookies were competing against each other for the final prize (roughly $12,000, and a recording contract).

And, they also had Eric and me, working behind the scenes, coaching studio performances, rehearsing, recording, and helping to plan the staging of each contestant’s weekly song.

There were two other critical differences between Maisha Superstar and American music contest shows. First, Maisha Superstar’s scoring system was not based in any way on popular vote. Instead, an independent panel of judges (which did not include the mentors, Eric, or myself) accounted for 70 percent of the total, and the final 30 percent came from studio audience votes. Second, none of the rookies were eliminated during the first five weeks of performances. And while five weeks is a short time to try to find yourself as an artist or performer, it is a huge improvement over zero.

Because the scoring was cumulative and the eliminations were based on the rookies’ average score, one bad performance didn’t spell doom. In U.S. reality shows, there’s rarely such a safety net—we’re more interested in a Shark Tank or crowning a Survivor.

Did it work? I think it did. Having those first five weeks to sing without fear of elimination gave the rookies time to build a viewer following, which was important for ratings. It also freed the teams to try things they might not have otherwise. We had one rookie do an original song in week one.

And it gave the contestants time to find songs that resonated with the audience. For instance, even though all three countries share English as a common language, we found that contestants singing in Swahili, Luganda, or even a tribal language did very well. The judges and studio audience were all well aware of western Top 40 songs, but loved when the rookies “brought it home” with performances in their home language. Even if people didn’t understand exactly what words were being sung, the honesty of the connection the singers felt to the music was clearly more important. 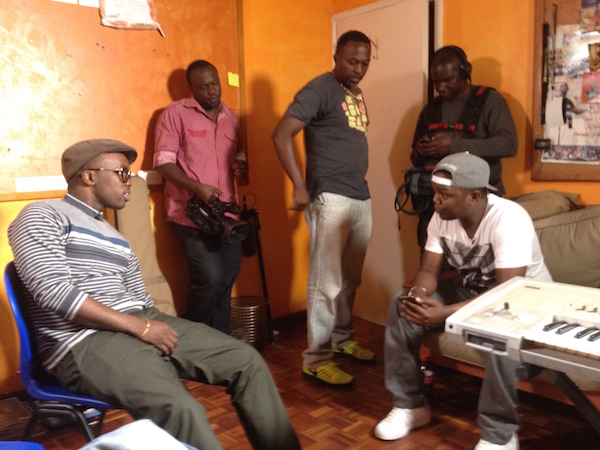 There were a few bumps in the road. The cumulative scoring system over-rewarded consistency, and under-rewarded growth. At one point, attempts to plant blatant partisans in the studio audience threatened to derail the voting. When Ugandan and Tanzanian contestants felt that the Kenyans had an unfair advantage because the show was being recorded in Nairobi, a Ugandan mentor used his formidable social media presence to try to stack the audience with Ugandans who would vote for country over performance quality. The following week one of the Kenyan contestants retaliated. Suddenly we saw audience interest drop dramatically. An announcement was made about fair voting, and thankfully those attempts to stack the deck did not derail the show.

My experience with Maisha Superstar reinforced my feeling that music stars have rarely been instant successes. There are almost always years of work that go into their career before they hit it big. Their “overnight success” is a narrative illusion created to sell records, tickets, and often for the self-aggrandizement of the people who claim to have “discovered” a new star. But the reality is far more complex. Maisha Superstar showed that the process can be entertaining for an audience as well. And that everyone benefits from the support of those around them.