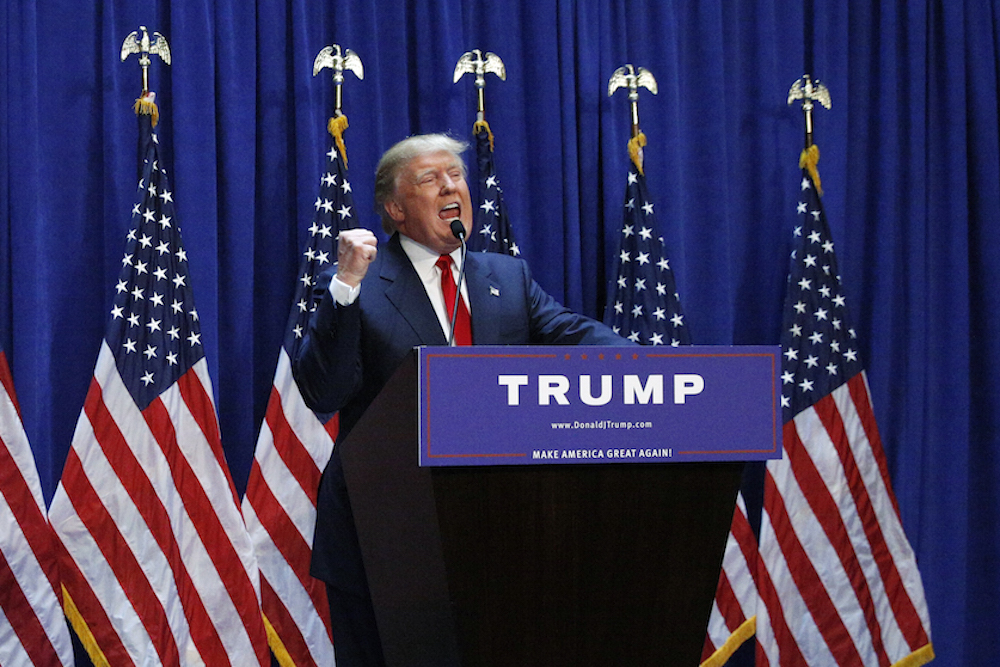 Blacks will remember June 2015 as the month when funerals forced the flag down. Gays and lesbians will long celebrate love winning across 50 states.

And Latinos? They had The Donald’s comeuppance.

OK, it might not count as a great accomplishment that a few corporations—including Macy’s, NBC Universal, and Univision—severed ties with Donald Trump after he graced his announcement of a presidential run with a xenophobic rant insulting Mexican immigrants. Nonetheless, Trump served up a defining moment.

Leave aside his incoherence and banality; Trump’s diatribe illustrated the extent to which Latinos’ antagonists have prescribed the battlefield over immigration. And, compared to what else happened that week, particularly the victory for same-sex marriage, the Trump brouhaha showed how far Latinos have to go before they can wage a fight over immigration on their own terms.

Trump’s invective was anything but original. “When Mexico sends its people, they’re not sending their best. … They’re bringing drugs. They’re bringing crime. They’re rapists.” That’s nothing more than a crude restatement of rancor that’s been aimed at immigrants forever, but Trump also aped a particular venom long directed at Latino immigrants. Trump’s slurs echoed the infamous “They keep coming” television ad in a 1994 California gubernatorial campaign that featured grainy black-and-white images of illegal border crossers amid promises to defend against the onslaught, with troops if necessary.

Trump was hardly the first bigot to conjure rape as a justification for repression.

The same trope dates back to the 1970s. Almost as soon as the Latino population began to grow rapidly through immigration about 40 years ago, a backlash developed, and it focused relentlessly on one theme—illegal immigration out of control—and the constant retelling of a single narrative: Mexicans penetrating our border and violating our sovereignty.

You’d never know from all the rhetoric surrounding immigration that nearly two-thirds of the nation’s 55 million Hispanics are native-born U.S. citizens, or that more than half of the 19 million foreign-born Latinos are naturalized citizens or legal permanent residents. That is a big population with a rich and multifaceted public policy agenda. But for much of four decades and especially the last, all of the attention in the political arena has focused on some six million unauthorized immigrants from Mexico and another three million from the rest of Latin America.

The obsession with illegal immigration is much more than a political tactic. The rhetoric has been matched with an enforcement campaign that has seen more than two million people forcibly removed from the country since the start of the Obama administration. That’s left communities littered with broken families.

And consider this: There are twice as many Latinos of school age as there are Latino undocumented immigrants. Then weigh how much attention is directed to their educational needs compared to the incessant calls for more spending on border controls, on top of the more than $200 billion that has already been spent since the mid-1980s.

The backlash has not only narrowed the Latino policy agenda to the topic of illegal immigration, but also it has determined how the issue is framed. Given that most of the migrants in question have come in search of work, enforcement might logically have focused on workplaces rather than the border. But, until 1986, it was perfectly legal to employ someone who lacked proper immigration status, and in that year, Congress enacted a prohibition that was designed to be unenforceable at the employers’ behest. Congress also failed to create legal channels for the low-skilled immigrant workers that the U.S. economy craved in the 1990s and early 2000s. Politicians, bureaucrats, employers, and consumers, we were all complicit. But instead, the migrants were designated the protagonists of this tale, as if their actions alone brought about this situation.

This strategy—the assignment of agency, and hence blame, to a group—has been used often as a pretext for punishment or exclusion. Racism has often involved the invention of inherent characteristics to excuse all manner of mistreatment. Meanwhile, homosexuality has often been deemed a choice in order to justify the denial of rights. And, once agency is assigned, moral judgment can follow quickly, and the protagonist becomes a villain.

Trump was hardly the first bigot to conjure rape as a justification for repression. The false accusation of rape is perhaps the ultimate assignment of agency, and in the past it has been used to deadly effect against both blacks and gays. Once “they” are designated the responsible parties, the portrayal of wickedness gets easy, and then all the instruments of the state can be applied to accomplish exclusion.

For the civil rights struggles over race and sexual orientation, the events of June 2015 marked victories over narratives of false protagonism. Agency shifted squarely to slave owners when their heraldry was deemed unfit for veneration, and the Supreme Court recognized that marriage to someone of the same sex is a constitutionally protected expression of innate identity, not a perverse choice.

Corporate America’s relatively low-cost separations from Trump have so far done little to counter the illegal immigration invective. Some Republicans have been afraid to denounce Trump for fear of antagonizing primary voters and Fox News, and Fox News lost no advertising as it continued to provide a stage for the narrative of agency and condemnation.

But circumstances and determined advocacy have begun to change the political dynamics on immigration. The Great Recession and lingering unemployment put the brakes on low-skilled migration, and so the size of the unauthorized population has held steady for nearly a decade. The image of the illicit border crosser has lost some of its power to spur anxiety, and in the policy arena, attention has shifted to the population of unauthorized already present in the country rather than the now paltry flow of newcomers.

With the passage of a massive immigration reform bill by the Senate in 2013, a broad consensus emerged on just about every policy question except what to do about the resident unauthorized population, and that issue became the crux on which the matter foundered in the House. Meanwhile, public opinion has solidified. In a Pew survey conducted in mid-May, 72 percent of respondents said unauthorized immigrants who meet certain requirements should be allowed to stay in the country legally. That compares to 57 percent in the same survey who said they favored allowing gays and lesbians to marry.

President Obama tried to translate these developments into policy with a set of executive actions announced last November that would have offered a temporary right to work and protection from deportation to some 5 million unauthorized immigrants with long-standing family ties here. A lawsuit brought by many of the same states that had sought to ban same-sex marriage blocked the executive orders’ implementation, and the issue now seems headed to the Supreme Court.

For Latinos and their allies on immigration, the coming challenge is whether this court battle can become a means to combat the narrative of the illegal alien as violator to the same degree that fights over marriage became a means of combating the narrative of homosexuality as a choice. If the framing of a Supreme Court case can create a new narrative about unauthorized migrants as parents, neighbors, and workers who have been here for a long time already without calamity and who are not going away, then, perhaps, next year Latinos will celebrate June.