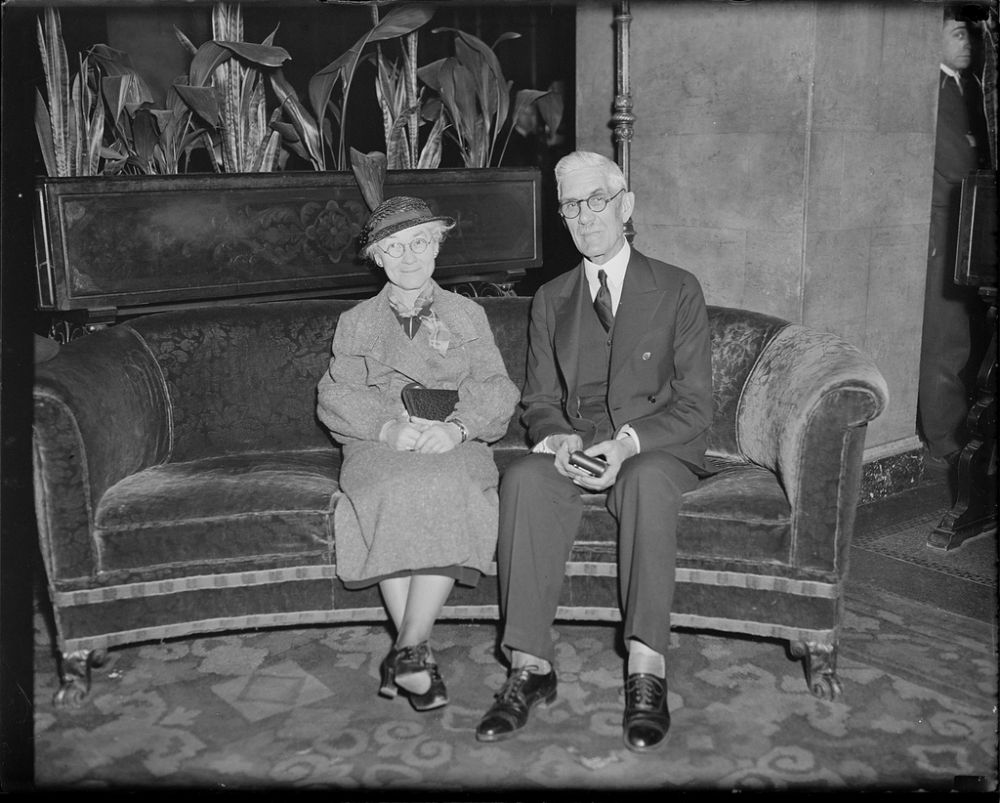 Long Beach, California, is known today for its terrific aquarium, for the Queen Mary, and for being the hometown of Snoop Dogg. But its greatest contribution to the United States may be something else entirely: Social Security.

This month, we marked the 80th anniversary of the establishment of the most enduring policy success of the Great Depression, the program that reduced poverty for millions of older Americans.

But all that came two years after a retired doctor in Long Beach looked out his window one morning in 1933.

Since leaving the practice of medicine, Francis Townsend had become a not-very-successful, quite eccentric entrepreneur.

His next career was inspired when he looked out his window and watched three older women rummage through a trash can, searching for food beneath his window.

The sight enraged him. So he wrote a letter to the editor of the Long Beach Press-Telegram recounting the episode and his reaction to it.

“A torrent of invectives tore out of me, the big blast of bitterness that had been building in me for years,” he wrote. “I swore, I ranted, and I let my voice bellow with a wild hatred I had for things as they are.” He told the paper that at that moment, he had vowed to his wife that he would shout, “‘Until the whole country hears.’”

Townsend’s letter went on to condemn the ravages of the Depression and the cruelty of elder poverty. And then he made a fateful suggestion: The country should establish a new national retirement program that would both stimulate the economy and eliminate poverty for older Americans.

It was not surprising that such a suggestion would come from California, which had doubled its older population between 1920 and 1930. And it was appropriate that the idea emerged from Long Beach, where a third of the population was elderly.

In his book Endangered Dreams, California historian Kevin Starr described “the Long Beach elderly” of that time as “living on fixed incomes in simple cottages”:

[T]he majority of them folks from Iowa and elsewhere in the Midwest had come to Southern California to enjoy a simple life of church going, potluck suppers and checkers in the park …The Depression destroyed their plans as pension trusts shrank, or, in some cases, as they went under entirely … Fully 50 percent of the elderly in America were in need of some form of outside aid if they were to make it through the slump.

I know this history because I am a Southern California organizer and a policy wonk who has worked on issues impacting seniors in this country for over 30 years. This month, I am proud to be participating in events celebrating Social Security’s 80th birthday.

The program’s humble beginnings, with that letter, are a marvel. But the program is even more so. That rate of elder poverty has since dropped from 50 percent to nearly single digits. Life expectancy has gone way up. Americans can expect to age with dignity.

Over the decades, Social Security has grown beyond Dr. Townsend’s visions to cover disabled workers, as well as surviving spouses and children. And for all the criticism from skeptics about the program’s finances, reports show that Social Security is solvent and will be able to pay full benefits for a very long time. Today, it has a surplus of more than $2 trillion.

The history of Social Security itself suggests that bold changes in the program—perhaps even including its expansion in a time of government budget cuts—may be more viable than cynics assume.

What’s most remarkable about Townsend’s letter is the breathtaking speed of what happened next. The doctor received such an outpouring of support and shared outrage that he devised what he called the Townsend Plan.

Townsend laid out his plan in a series of additional letters to the newspaper. The substance was simple. He called for a $200 pension to everyone over the age of 60, funded by a 2 percent sales tax on all business transactions. Recipients, who had to be fully retired and without a significant criminal record, would be required to spend every cent of these monthly allotments. At the time, $200 a month was sufficient for a middle-class lifestyle. Thus the plan would be a major step in bringing people over 60 out of poverty while stimulating the national economy.

Less than four months after the letter to the editor’s publication, in January 1934, Townsend and a colleague incorporated an entity called Old Age Revolving Pensions, Limited. Eight months later, the first Townsend Club, an entity to support the plan, was organized in Huntington Park, California. By January 1935, a half million Americans had joined Townsend Clubs across the country, generating $1 million in dues and donations. That same year, Townsend made the cover of Time magazine. And a newly elected congressman from Los Angeles introduced legislation to implement the Townsend Plan.

There was more than one movement that pressured the Roosevelt Administration to create the program. And the president had been clear as far as back as 1932 that a program of social insurance for seniors was one of his goals. But history is clear that the Townsend movement was a key force in making it happen.

The passage of Social Security did not end Townsend’s movement for retirement security. Ultimately, over 2.1 million people joined more than 7,000 Townsend Clubs throughout the country. The vibrancy of the movement was so strong that in 1936 the clubs delivered petitions to Congress with 10 million signatures to back higher benefits for Social Security.

Townsend himself saw his plan as more than a retirement or stimulus. He wanted to organize and inspire the country to collective action. In an April 1935 letter to the Townsend Clubs, he outlined their primary goal–”enactment of the Townsend Plan into law”—then added, “The secondary purpose of Townsend clubs is a desperate fight to continue the democratic spirit and form of government in these United States.”

This mix—of urgency for passage in the now, and a long-term commitment to vibrant democracy—was the most profound feature of this movement led by a doctor from Long Beach. It is why Townsend succeeded. The Long Beach origins of Social Security are a reminder that grassroots organizing, for all its difficulties and challenges, is both possible and imperative if you want to change the world outside your window.