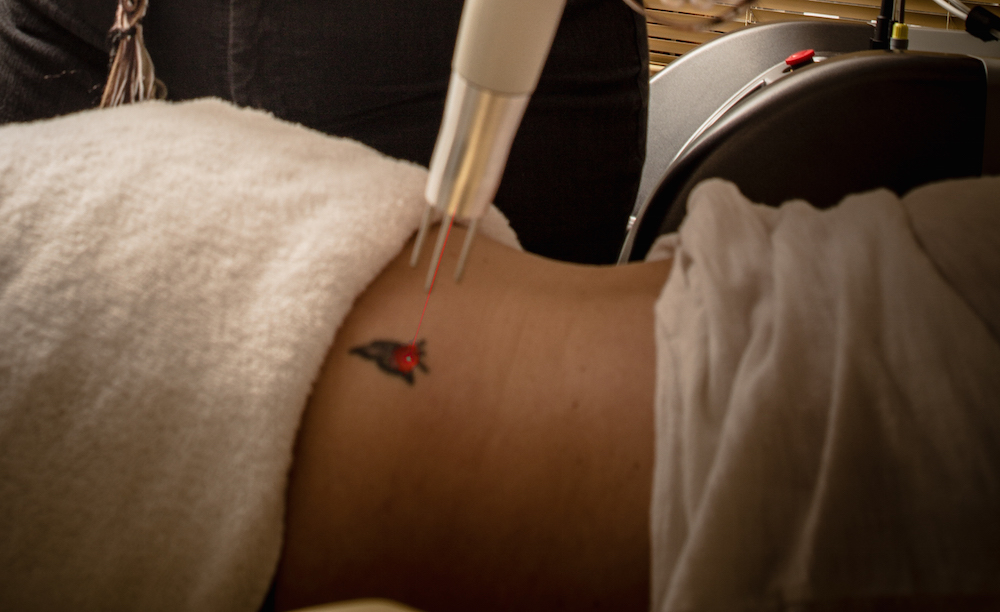 There are few places where lawyers, ex-gang members, stay-at-home moms, and rebellious teens all converge. At my job as a receptionist at a tattoo removal office, this is my daily experience. My routine of checking patients in and out is often interrupted by someone coming in to inquire about our services. There’s the man who tells me he’s wanted to get rid of a homemade tattoo that says “tattoo” in chicken-scratch writing, or the guy who changed his mind in the middle of getting a huge back piece. Other situations aren’t so funny. Many men and women come to get ring finger tattoos removed. One woman had a tattoo of two small feet with a halo over it. The first thing I often have to make clear is, “It doesn’t come off like it goes on.” Tattoo removal is a long, multi-stage process.

But technology is rapidly changing the industry. If any of these people wanted tattoos removed five years ago, it would have meant many painful, expensive treatments—and gambling on the appearance of their skin afterward. Now, laser technology has advanced to where the treatments are more comfortable and safe, and the results are more predictable. As a result, more people with tattoo regret are doing something about it; in the last decade, the tattoo removal industry has grown 440 percent. These advances have brought new demands and costs to those who operate removal technology. And they’ve also opened new doors for people to work in the industry, including me.

Getting into the tattoo removal business wasn’t difficult. I found a job posting on my university’s job site and applied, despite having no previous experience working in medical offices. A week or so later I was at the front desk of a tattoo removal business near downtown Phoenix learning the ropes. Since then, I’ve seen so many bad tattoos that, when people ask, all I can say is “I’ve seen it all.” Those horror stories have helped me manage to withstand peer pressure to get a tattoo, despite the fact that I’m a member of the most inked generation in history, and also from Arizona, which has one of the largest tattoo industries in the country.

The office I work at is one of the few standalone tattoo removal places in the United States, although the numbers are increasing. I’ve only been there for just over a year, but the technology the office works with changes so fast that I’ve been witness to the never-ending scramble to keep up.

Out of all of the methods available to remove or alter a tattoo (including lightening creams, excision, plastic surgery, and microdermabrasion), laser tattoo removal is rapidly becoming the most popular and effective. Why? Think of the tattoo ink sitting in the skin like a boulder. A tattoo removal laser breaks up that boulder into pieces small enough for your body to rid itself of them. The body does this by absorbing the pieces into the blood, then passing them through the liver and out along with other waste. A patient has to get multiple treatments to completely break the tattoo down.

When I’m asked what being hit with the laser feels like, my answer is that it’s like having hot bacon grease splashed on you while being simultaneously snapped with a thick rubber band. (I know because I’ve had sunspots removed with the same laser.) To ease the pain, laser technicians can apply topical numbing, which is usually not very effective. At our office, we have naturopathic doctors (doctors who focus on more “natural” treatments and a holistic view of the body) who are accredited to inject lidocaine, a local anesthetic–like the kind you get at the dentist’s office–to make treatments more bearable. A laser technician certificate alone doesn’t allow people who do tattoo removal to use injectable methods, yet a large portion of people who remove tattoos only have this certificate.

As a new industry, tattoo removal’s standards of care are not well defined, so it’s up to consumers to do their homework. Getting a laser certification usually only takes a few days to a week, so the market is flooded with people who don’t have much experience. As a result, the number of people who aren’t trained well is overwhelming.

The crucial number in tattoo removal is the number of treatments it takes to get rid of a tattoo. For this, every tattoo is different. The color of ink, for instance, plays a big role in determining how many treatments someone needs; black and red are the easiest to remove. One of the biggest factors is the type of laser that’s used. As lasers advance, the number of treatments drops.

Last December, our office purchased the newest laser on the market: the PicoWay. Its parent laser, the PicoSure, debuted what is called “picosecond technology,” which fired laser pulses at a trillionth of a second—or a “picosecond.” This was a huge game changer for tattoo removal, because it broke tattoo ink up into even smaller pieces than what was possible before, making it easier for your body to absorb and process the tattoo. But the PicoSure also had a higher propensity to scar, and couldn’t be used on certain skin types. The PicoWay resolved these problems, making laser tattoo removal possible for a lot more people.

When the new laser finally arrived in March, our office changed profoundly. We cut the estimated amount of treatments in half, which changed the length of the removal process from a year to about six months. In a few cases, patients saw their tattoo clear 50 percent or more just from the first treatment.

But the technological advance also has created new pressures. One of our biggest fears is that the shorter amount of time to remove a tattoo will lead to a shortage of patients. So far, that hasn’t been the case; more people are removing their tattoos than ever before. We’ve done research, and found that many people have wanted to remove tattoos but hadn’t acted because they didn’t know enough about the process, or what they knew was outdated.

Further disruption is coming. Laser manufacturers are already working on the next step, a “femtosecond” tattoo-removal laser that would split pulses even shorter—only one quadrillionth of a second between zaps.

In the near future, tattoos might in fact come off as easily as they go on. Even when it comes to permanence, change is accelerating.