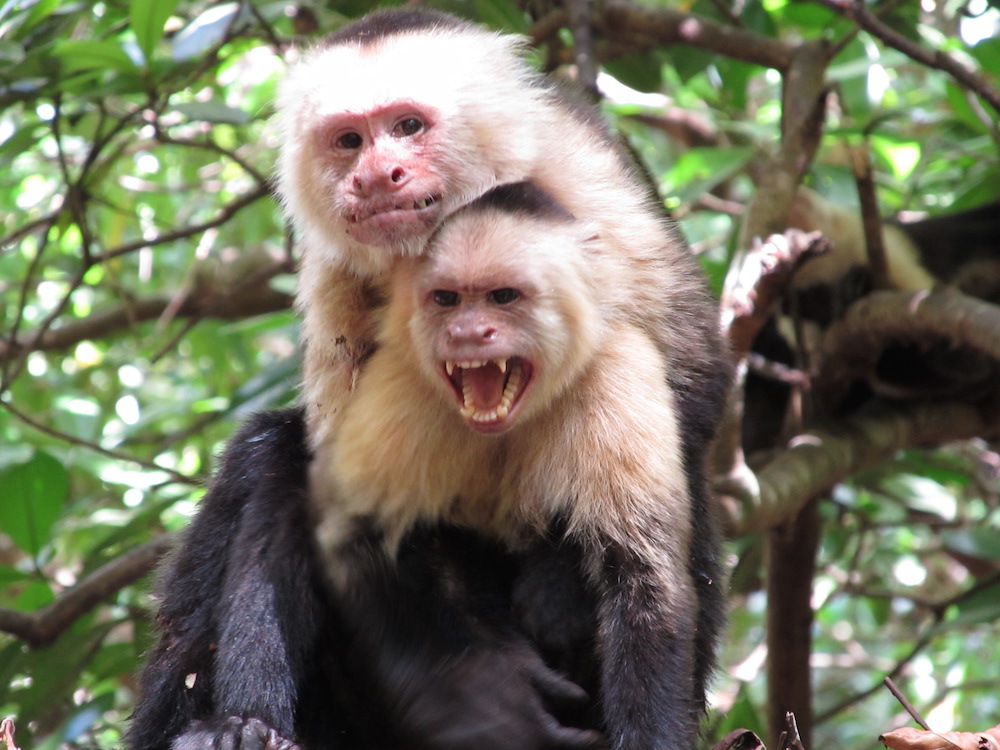 Whenever I find myself in a contentious academic meeting or I see clips of Congress trying to pass (or kill) a bill, I am reminded of capuchin monkeys.

Don’t get me wrong—I respect my colleagues, and don’t consider politicians to be sub-human. It’s just that the monkeys I have devoted so much of my life to studying exhibit extraordinarily sophisticated political strategies that mirror the social machinations so common in human workplaces where alliances need to be formed and conflicts erupt.

A quarter century ago, when I started my quest to learn about the social and political strategies of capuchins by traveling to Costa Rica (they are native to Central American and South American forests), I had no idea how impressive they’d be. I could barely tell them apart at first. Now, with 25 years of behavioral data collection behind me encompassing five generations and 12 groups of monkeys, I have come to know a great deal about these astonishing animals and the society they have built.

One of the more remarkable aspects of capuchin society is the emphasis on stability and order. Despite the capuchin tendency to “back talk” to authority rather than submit, there are clear rank relationships. In general, all adult males are dominant to all adult females. Among females, there is a straightforward linear ranking. That means, for example, if monkey A is dominant to monkey B, who is dominant to monkey C, then C can never be dominant to A.

Among capuchin males, as in a typical human corporation, there is an “alpha” male who clearly dominates everyone else in the group. However, there is not necessarily a clear ranking among the remaining males. Rank relationships among the youngsters are constantly changing and are somewhat influenced by who is related to whom, as relatives intervene often in fights among younger monkeys. During adolescence, young monkeys become much more assertive, pushing their way as far up the hierarchy as they can go, assisted by their relatives (particularly female ones). 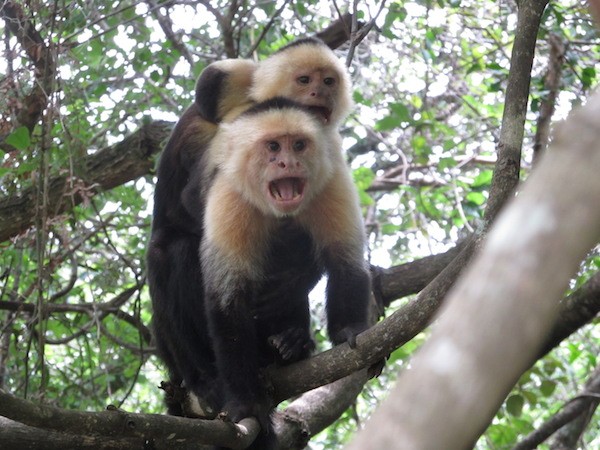 This is female Boones (with her infant on her back) forming a coalition with her male friend Napoleon.

Once adulthood is reached, social mobility becomes more difficult. Capuchins exhibit a firm tendency to reinforce the status quo: when they see a fight between members of the same sex, they support the higher-ranking individual some 85 percent of the time.

This rule does not apply, however, when males are fighting females. In these situations, both male and female bystanders support the lower-ranking female.

Why? The answer may lie in the overall genetic structure of the group. Capuchin females are intensely loyal to their female kin and remain with them for the duration of their lifetimes. Males are more fickle, typically leaving their birth group to seek their fortunes elsewhere by the time they are adults. Female kin-based alliances form the backbone of these monkeys’ political structure, and females can truly count on one another for political support in a way that males cannot. So, coalitions of females often defeat individual males in squabbles over access to food, despite their inferior weaponry (i.e., smaller canine teeth).

The alpha male is the preferred ally of practically everyone. He receives more grooming and social support than the other males, and he also does almost all of the breeding. New alpha males typically kill nursing infants that were fathered by their predecessors, because this hastens the females’ return to breeding condition, allowing the alpha male to get an earlier start on his reproductive career. Therefore, political turnover is devastating to females (who lose their infants), as well as to males (who often die in the process of fighting for the rights to become the new breeding male).

All parties, to an unusual degree in the animal kingdom, thus have a vested interest in stability. An alpha male often remains in power longer than any U.S. president ever has, reigning up to 18 years, or three generations. This is astonishing even by human standards. What gives an alpha male this kind of power?

A capuchin is pretty decrepit by the end of an 18-year tenure as alpha male—clearly no match in physical combat to the many prime-aged males who are roaming the environment looking for an opportunity to rise to power. But in capuchins, as in humans, a good measure of social intellect—of the ability to manage one’s allies—can be an effective substitute for prowess in physical combat. Sons appear to enhance an alpha male’s ability to hang on to his power. Father-son bonds are very strong, and sons are intensely loyal to their fathers, even when they have the physical capacity to defeat them. Sons seem loathe to leave their families as long as their father is still in power and prove tremendously useful in helping Dad ward off immigration attempts by foreign males who express interest in taking over the breeding position. It’s a dynastic dynamic that human monarchs might envy, as capuchin sons’ loyalty often exceeds that of princes eager to inherit the throne as early as possible (like Henry II’s sons).

Here is a scene that would be familiar to anybody who has spent more than an hour with capuchin monkeys. Picture two monkeys stacked on top of one another, heads vertically aligned, teeth bared, as they glower at their mutual enemy a few feet away. The top monkey clutches the chest of the bottom monkey, feet and tail grasping the legs and tail of the monkey below. The monkeys bounce up and down, waggling their tongues as they squeak at their opponent. They egg one another on, bouncing closer to their enemy and finally boxing the head or pulling the ears of their outraged victim, as their squeaks intensify and their bouncing becomes so vigorous that the top monkey has difficulty staying mounted.

Capuchins are masters of alliances. They have a rich gestural repertoire of signals for communicating their alliances that are universally understood by capuchins everywhere. Coalitions—two or more monkeys ganging up on a mutual opponent—are a regular part of social play, starting in the first year of life. Coalitions form not only against other monkeys but also against other species. Capuchins are feisty and easily outraged, but they seem to crave the opportunity for teamwork and are easily persuaded to take up another monkey’s cause.

When a monkey is in a fight, it will survey the other monkeys standing around and request assistance from someone who is both higher ranking and a closer friend to it than to its opponent. Capuchins readily grasp these subtleties about relationships, perhaps remembering the patterns of past support they have witnessed, and use this political information strategically. Their cognitive sophistication with regard to political strategizing was one of the surprises that emerged from my research, because New World primates had been assumed to lack such abilities.

Males are not as intensely loyal to their brothers as they are to their fathers, though they do show some preference for co-migrating with them. When males roam the landscape together, seeking a new home, they have relaxed relationships characterized by cuddling and essentially no quarreling. Once they select a group to target for immigration, they collaborate against the males of the new group. However, once the current alpha male has been overthrown, the brothers can have quite ugly confrontations about which of them should get the breeding position. As Cain and Abel knew, some conflicts turn lethal.

In general, capuchins (like humans) are highly xenophobic, viewing members of other social groups as enemies. But there is nothing like a common enemy to solidify relationships within a group. Even when two males are locked in a chronic struggle for the alpha position, wounding one another and viewing one another with the greatest suspicion, they will drop all animosity towards one another as soon as a male from an enemy group shows up. Still bearing the wounds from their recent combat with one another, they will come together in the coalition-stacked posture and enthusiastically menace the new opponent, as if they have forgotten their recent conflicts. 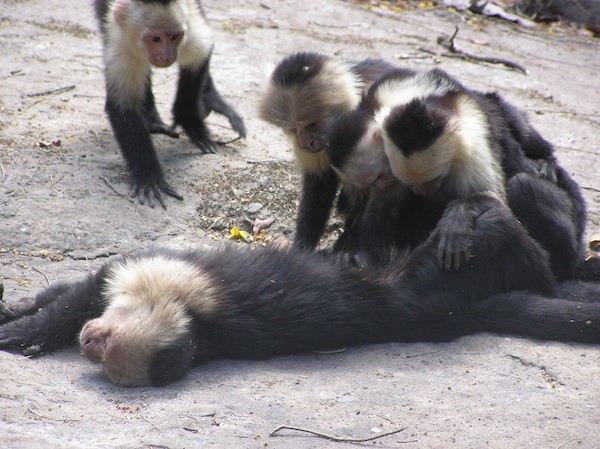 The alpha male Moth is being groomed by his many admirers, including alpha female Mezcla, her daughter, and two of her grandsons.

Slumbering anteaters, toads, wasp nests, innocent primatologists like yours truly – any of these targets can be declared an enemy “outgroup” when two monkeys need to work on their relationship. Perhaps it is not so different from the way some human leaders focus attention on foreign threats, real or imagined, to strengthen social cohesion when the going gets tough on the home front.

One way in which capuchin politics differs from the human version becomes apparent in election season. We humans take advantage of our language and capacity for long-distance communication technology to form alliances that include people we have never met. The people we elect as our leaders are people whose reputations we know only by way of gossip from other people we don’t know. And this social and communicative complexity enables layers of deception, particularly regarding promises for the future.

We don’t see such deception or promises in monkey society. In capuchins, decisions about whom to support are based on their accumulated knowledge of each group member’s behavior in past situations. In other words, they choose based on records of behavior, not TV ads. Capuchins are well-informed, skilled social psychologists when it comes to predicting who is likely to help whom.

Monkey politics is, thus, truly local. And most of it is transparent. In monkey society, the most important social interactions happen out in the open, instead of behind closed doors.