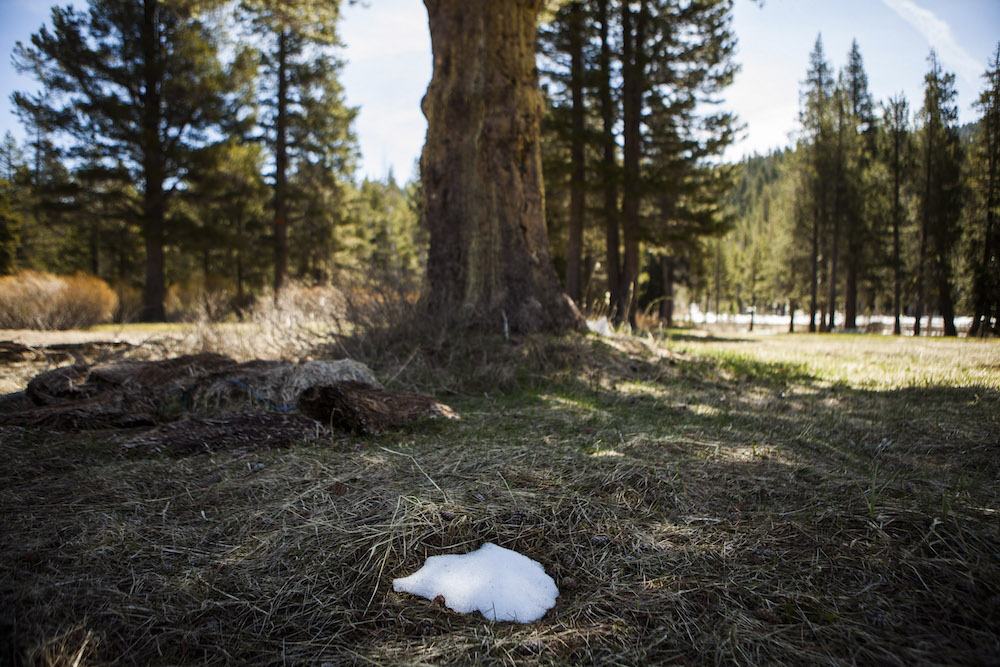 In 2005, I moved to the U.S. from Belgium to study the influence of climate on wildfires in the Sierra Nevada over the last five centuries. As part of this work, I travelled for three months all around the mountain range to collect samples of trees and tree stumps. I stayed in remote service barracks and spent my days tromping through meadows and hiking up steep creeks to find trees that were scorched by past fires. On more than one occasion, I found myself wondering whether a nearby roar I heard was from a mountain lion or a bear. In urbanized Belgium, nature had been a thing I only learned about in school. The Sierras’ snowy peaks, vast forests, and towering trees—Giant Sequoias, I learned, actually are giant—all made a lasting impression.

Thanks to the ample snows that usually fall, the Sierras have been California’s most efficient water storage system. In normal years, the mountain range’s snowpack provides 30 percent of the state’s water. It is the primary source for reservoirs that supply drinking water, agriculture, and hydroelectric power. But this year, the snowpack was at just 5 percent of its 50-year average. This statistic, which was announced by the California Department of Water Resources on April 1, became the poster child for the extreme drought conditions that have plagued California for the last four years. When California Gov. Jerry Brown declared the first-ever mandatory state-wide water restriction, he chose a Sierra Nevada snow-measurement station as his backdrop. For the first time in 75 years, that station was surrounded only by dirt.

We were able to reconstruct the history of snowpack in the region all the way back to the year 1500. The results, which we published last week, made national headlines: The mountain range’s 2015 snowpack level is the lowest it has been in the last 500 years.

For me, Brown’s announcement worked as a call for action. After my time in the Sierras, I had realized that my main research interest—the interaction between climate and forest ecosystems—could best be pursued amidst the majestic landscapes of the American West, so in 2011, I became a professor at the University of Arizona in Tucson, where I now lead a team that uncovers the past climate of California by studying its trees. I knew my research could put this year’s 2015 snow drought in a much longer context.

While there are no written documents about the climate in California from centuries ago that anyone knows of, nature itself has been writing the story of its past in many places—caves, shells, lakes, and, of course, trees. My job as a paleoclimatologist is to decipher this story. Trees are remarkable creatures: In California’s Mediterranean climate, they form a growth ring every year, and the width of that ring depends, to a large extent, on that year’s climate. After a wet winter, the ring that forms is relatively wide; after a dry winter, the ring is narrow. By measuring the widths of these rings in trees that have lived for centuries, my team can “read” what the climate was like in each year over that time span. And we can extend this outlook even further by collecting older dead wood.

The amount of snow on the ground at the end of the snowy season in the Sierras is largely determined by two climate components: how much precipitation fell during winter, and how warm or cold the winter was. Temperature determines how much of the precipitation that fell was rain versus snow, and affects the speed of snowmelt. We put two tree-ring data sets together to represent precipitation and temperature over the last 500 years. By measuring the width of the rings of more than 1,500 blue oak trees in central California, some of the most climate-sensitive trees on the planet, we were able to reliably trace Pacific Ocean storms that have traveled east over central California and brought precipitation to the Sierra Nevada. We complemented this data with a 500-year-long winter temperature record derived from tree-ring data from a variety of trees throughout the American West, which was provided by the National Oceanic and Atmospheric Administration.

By comparing these two data sets to Sierra Nevada snowpack records dating back to the 1930s, we were able to reconstruct the history of snowpack in the region all the way back to the year 1500. The results, which we published last week, made national headlines: The mountain range’s 2015 snowpack level is the lowest it has been in the last 500 years.

To put that in perspective, this means this winter has been the worst since the first European explorer, Juan Rodriguez Cabrillo, explored California in the 1540s—about 230 years before the first mission was established. When my team started our work, we thought this year’s snow drought would be extreme, but we did not expect it to be the absolute lowest.

Sadly, while this research sheds light on the past, it’s actually not a very good barometer for the future. It very likely will not take another 500 years to reach the next record snowpack low. California temperatures are only projected to rise over the coming century. Even if the projected strong El Niño in the Pacific dumps loads of rain on southern California this year, chances are that the Sierra Nevada snowpack will be a less reliable water source for the state going forward. This means fish and wildlife communities will suffer and, of course, California’s growing population of farmers, gardeners, skiers, and residents are only going to keep wanting more, much more.

Now the ancient Giant Sequoia trees that left me in awe when I first saw them are at risk of being felled by drought, and even under the immediate threat of the Rough fire.

As I write this, the summer monsoon is rolling in over Tucson, and I am reminded that it brings a chance of redemption after a dry winter in Arizona. But California doesn’t have monsoons. Instead, in the last few days, my Twitter feed has been filled with pictures and stories of the Butte and Rough fires that are raging through the region. To me, they demonstrate the well-studied link between low snowpack, earlier spring snowmelt, and the increased risk of wildfire.

Now the ancient Giant Sequoia trees that left me in awe when I first saw them are at risk of being felled by drought, and even under the immediate threat of the Rough fire. To a tree-ring scientist, these 3,000-year-old trees are the enigmatic face of the power and resilience of nature. They have doubtless survived many threats and disturbances that we are not even aware of. To walk amongst these giants for the first time was a dream come true. Little did I realize then that I’d be keeping my fingers crossed for their survival less than a decade later.