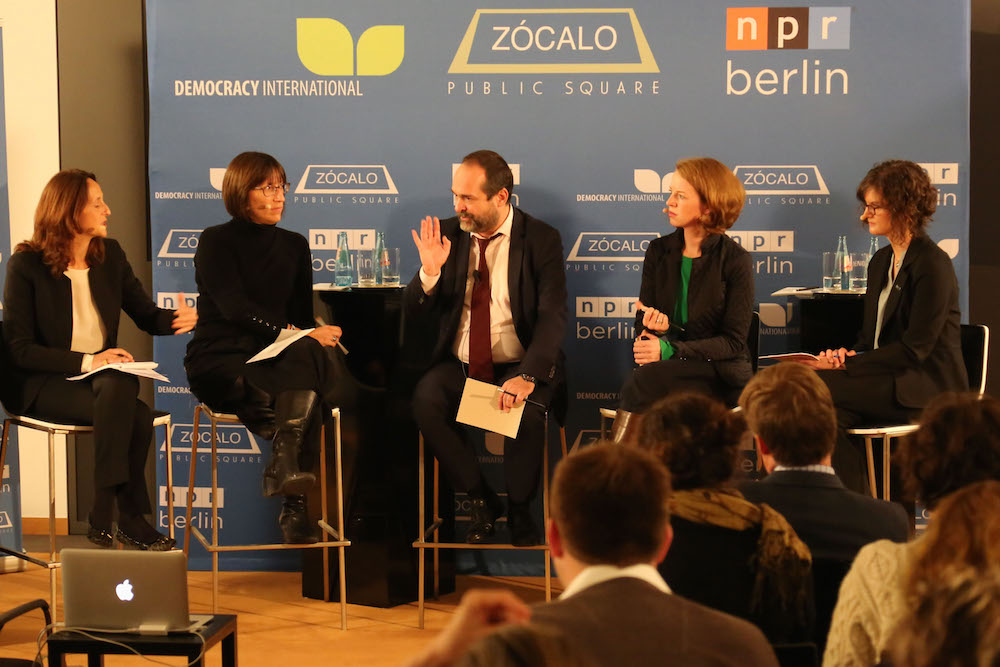 Europe’s current refugee crisis offers many good examples for how to better deal with the 19 million refugees around the world—and a host of hard lessons about mistakes to avoid, said panelists at an event held by Zócalo Public Square, Democracy International, and NPR Berlin before a live audience in Berlin and simulcast for an audience at New York Public Radio’s The Greene Space.

The panelists, who appeared together at Deutsche Bank in Berlin, praised many welcoming efforts in Germany and in other parts of Europe, and said the greater attention, money to support refugees and countries taking them in, and more local volunteers assisting refugees were good signs. “I’m really excited we’re living in these times,” said Astrid Ziebarth, director of the German Marshall Fund’s Immigration and Integration Program. “We’ve seen an Airbnb for refugees looking for places to stay … We have seen online universities for refugees who want to continue their education … It’s the birth of a new society.”

But panelists tempered talk of progress with criticism of how refugees were being treated and calls for much broader changes in how refugees are treated in Europe and around the world. “The situation is terrible for the people who reach Europe and Germany. Having said that, they are in a much better place,” said Wenzel Michalski, Germany director of Human Rights Watch. He added that on a recent trip to Athens, he saw refugees camping on cardboard boxes in a park—but they were able to sleep and were safer than they had been in theaters of war.

The panelists took a dim view of “hot spots” for refugees that have been set up to register and relocate refugees. Moderator and Reuters global news editor Alessandra Galloni said that police in Italy can look the other way as people avoid registration. And efforts to relocate people to other countries have been insufficient, with only a handful of people relocated so far.

The panelists, along with one lawyer in the New York audience, also suggested that existing legal definitions distinguishing asylum seekers and migrants did not fit human realities. Syrian refugees can have different needs and motivations when they leave Syria and head to Turkey than when they leave to Turkey for Europe. There’s also what was called a “two-class system,” in which Syrians are treated better than refugees from Iraq, Afghanistan, and other countries.

“The idea that all EU countries need to play a role and they need to determine who will be responsible for asylum claims—establishing that principle has been very valuable,” said Susan Fratzke, policy analyst at the Migration Policy Institute. “In practice, there’s a lot more to be done.”

Much of the conversation focused on the commitment by Germany’s chancellor Angela Merkel to welcoming refugees. Panelists discussed whether the political culture and labor markets of Germany could handle 800,000 refugees or more over a long period of time. But the impact of Germany’s more open door policy should serve as an example for others.

“If she hadn’t said that refugees and asylum seekers are welcome in Germany, we would have seen people piling up on these tiny Greek islands,” said Michalski of Human Rights Watch. “Probably we would have seen more people dying.”

Naomi Steinberg, director of Refugee Council USA, said that Germany’s generosity offered a stark contrast with the far less welcoming response by the U.S. government. “I’m coming from a country where we have not seen leadership,” she said, noting that the U.S. has taken in fewer than 2,000 Syrian refugees, which represents a departure from more generous American responses in previous refugee crises. “The bottom line in the United States is: If we wanted to resettle more Syrian refugees, we could.”

NPR’s Jacki Lyden, who moderated with an audience watching a simulcast in New York for the Public Radio International program “America Abroad,” and CUNY professor Richard Alba, also in New York, raised questions about whether Germany could integrate so many refugees.

In response, Ziebarth and Michalski, the two Germans on the panel, were optimistic, while noting that it would take considerable work. They also argued that integration of and care for refugees are in Germany’s best interests—so that people who remain became productive members of society.

Michalski noted that he has a refugee living with him. “I have a young doctor living in my home,” he said. “My friend, the doctor, he needs another eight months or year at university, and then he can work as a doctor. There’s a lack of doctors here because our doctors tend to go to Norway or the United States because they make more money there.”

In response to a question from journalist Marcus Walker about how Germany became “the America of the E.U.” and whether it and other welcoming countries like Sweden could bear such a burden, Michalski noted that Germany has successfully welcomed Syrian refugees for many years “but the numbers were kept under the carpet.”

The panelists all said that the refugee question requires more European-wide and global policies—for the good of countries and refugees. Steinberg of the Refugee Council USA said the world needed to create more safe travel options and destinations for refugees. She also noted that very few refugees return to their home countries, which means their issues should be considered more in the context of resettlement.

Fratzke of the Migration Policy Institute said such conversations should include many more kinds of institutions and people, and must focus more on early interventions and on the 86 percent of global refugees who are hosted in developing countries.

“One of the lessons we can take is that migration and refugee crises aren’t just issues for migration policymakers or humanitarian agencies,” Fratzke said. “These are crises that need to be viewed from a foreign policy perspective, from a development perspective … from a global perspective.” 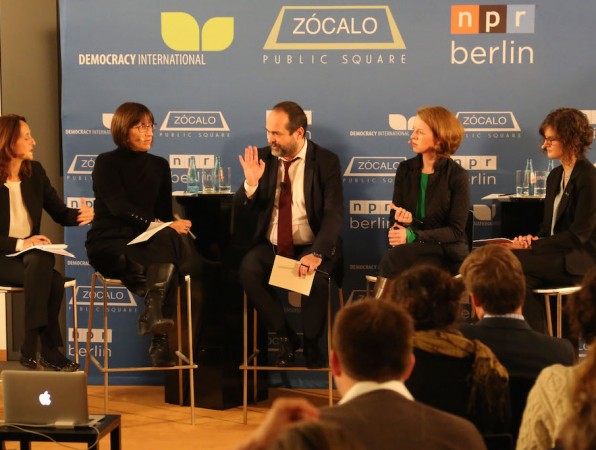 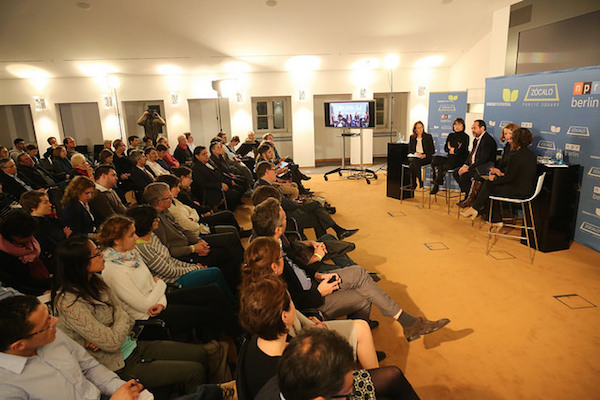 Great crowd at the Deutsche Bank in Berlin 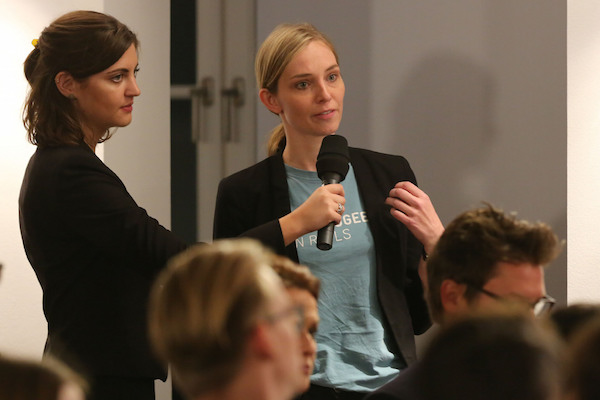 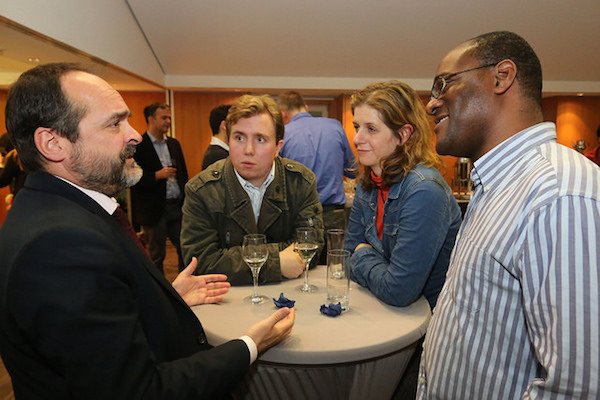 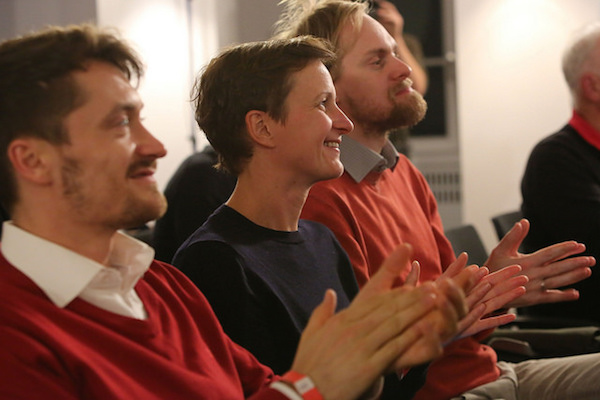 Audience in Berlin enjoying the program 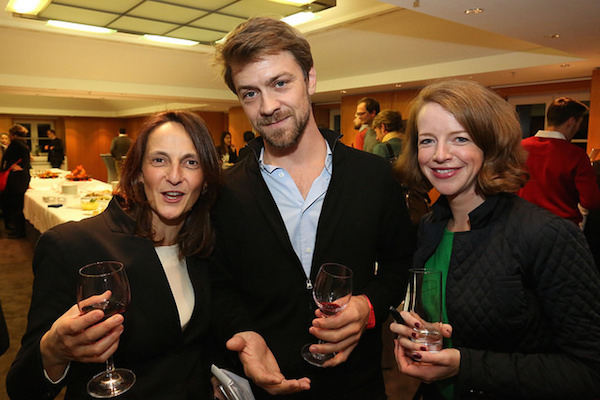