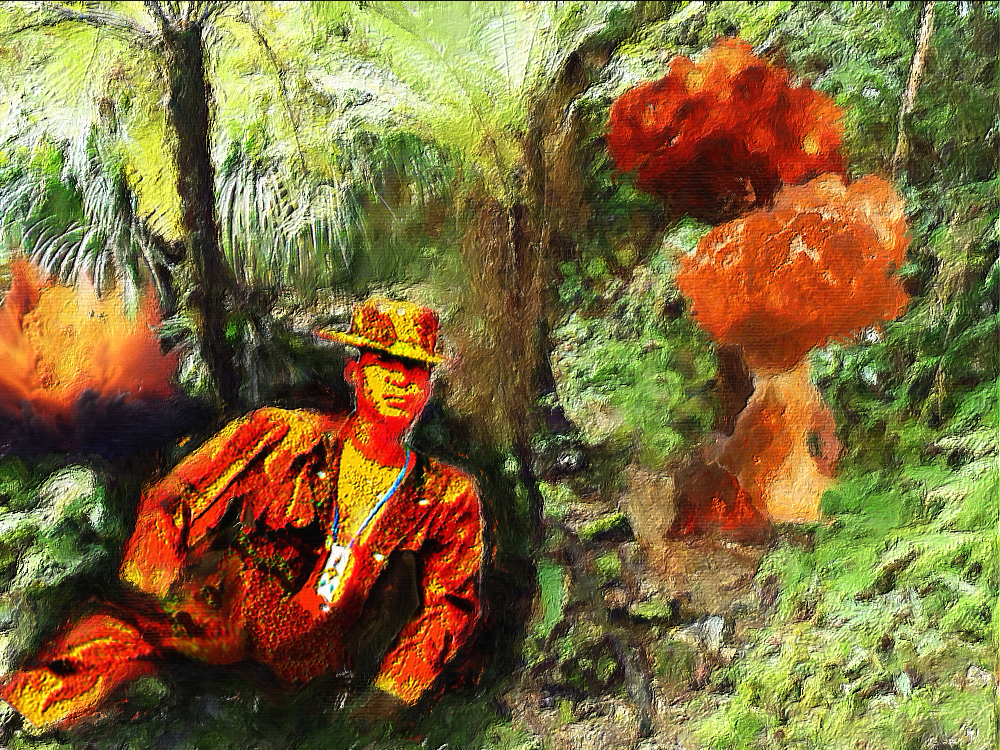 It has been 45 years since I returned to the U.S. from Vietnam. I was only 19, but the year I spent there made me feel like I had already lived 10 lifetimes. My family said, “Welcome Home,” but I have never fully come home.

Why do I still carry so much pain from that war? I have been told over 100 times: “Put it behind you and move on with your life.” But Vietnam hangs onto my innermost thoughts like a newborn to its mother’s warmth.

The friends I left behind wouldn’t want me to be in this bad state of mind. They would want me to cherish life. Sometimes I think: Why didn’t I die with them? They are the lucky ones. They are at peace now. I wonder if I will ever know what it is like to be truly at peace.

The clinical name for what I’m struggling with is post-traumatic stress disorder (PTSD), an anxiety disorder where the “fight-or-flight” responses triggered by a terrifying event can’t be turned off.

PTSD reminds me of an evil thief who tries to steal everything from you—your life, your family, and your mind. It won’t let you get close to people. It eats you alive from the inside out. PTSD has no mercy and its only goal is to devour your mind, body, and spirit. It’s a beast that never sleeps.

The first 13 years after I returned from the war were tough. My first wife left me after we lost our second child to miscarriage; I think the miscarriages might have been related to my exposure to Agent Orange. I remarried four years later. My second wife and I had two beautiful children together, but she left me when they were 4 and 6. I wanted love and yet, I pushed it away. It was hard for me to show my emotions. My heart couldn’t take losing anymore, so I built a wall around my feelings.

I could go on and on about the things that went wrong after I came back from Vietnam, but that was nothing compared to what happened over Memorial Day in 1983. That is always a hard time for me, and in 1983—after years of just barely holding it together—I snapped. I was back in Vietnam. I could smell gunpowder and blood.

Every day when I wake up, the PTSD monster says, Just stay in bed. Don’t get up. I finally listened to the monster. I could not get out of bed. I became dead to the world. I shut down.
My schedule for nine months was: Wake up at 7:30 a.m. Take a hot shower for my crippling arthritis. Make a bowl of ramen soup and eat it. I was back in bed by 9:00 a.m., and I’d stay there until 7:30 a.m. the following morning, only to repeat the routine once again.

At the end of the ninth month, my brother knocked on my bedroom door. I had just finished my soup, and was back in bed and about to nod off. He insisted on taking me to the Veterans Affairs hospital in West Los Angeles. The next day, I was admitted to the VA hospital for severe PTSD.

Growing up in the Antelope Valley north of L.A., I wanted to be a priest. But at 17, I decided instead to serve my country. I joined the Marine Corps. In December 1968, I went to boot camp at the Marine Corps Recruit Depot in San Diego. The drill instructors really knew how to make men out of boys! Every day, we did hundreds of brutal squat thrusts, sit-ups, chin-ups, and pull-ups. There was lots of running, going through the obstacle course, and marching in formation.

The drill instructors called us “maggots” “pukes,” “scum bags,” “slimy worms.” And they always put motherf—– in front of everything. The verbal abuse was at full volume, from the time we woke up until we went to sleep.

Next I went through intense combat training at Camp Pendleton, California. That’s where they teach you tactical field maneuvers, weapons training, how to kill, how to survive, and—you guessed it—more running, physical training, marching in formation, and of course, verbal abuse.

They transformed us into “lean, mean fighting machines.” I became part of a polished, synchronized team. Your life depends on what they teach you in the classroom and out in the field. We were trained in a replica Vietnamese “village” with about six or seven palm huts, a fenced animal pen, a water well, an ox cart, and large woven baskets that contained rice and/or weapons. We were made aware of the areas of possible booby-traps and the fact that the enemy lurked on the perimeter of the “village.” They actually had us in Vietnam before we even left the States.

When we landed in Vietnam and the stewardess opened the door of the plane, I was blasted with the largest dose of high-humidity heat that I have ever experienced in my life! 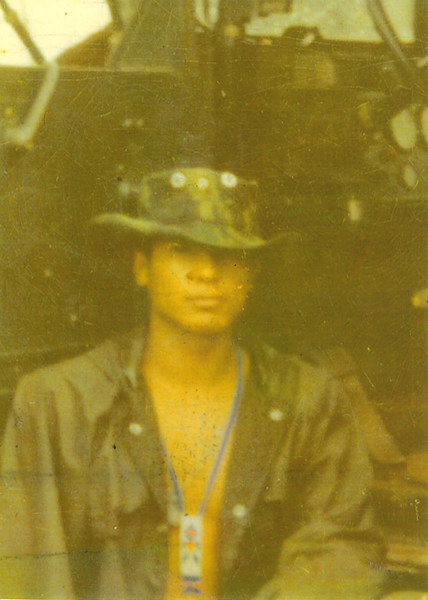 By the time I hit the tarmac, I was drenched in sweat. I smelt a new smell, like nothing I had ever smelled before. It was a combination of campfires, diesel fuel, jet fuel, sweaty Marines, the stewardess’ perfume, a jungle smell, gunpowder, and burning rubber … Rubber? My boots? The concrete tarmac at that hour was about 130 degrees. Enough to literally fry an egg! I thought: This is going to be my home for the next 365 days?

After I had finished my Marine Corp training, I thought I was prepared for the Vietnam War. Looking back on that experience now, nothing could have prepared me for the death and destruction of that insane war. I saw more death than I could have ever imagined.

I saw a young boy, about 12 years old, on a bike toss a grenade into a moving jeep, killing a young officer and his driver. It happened right in front of my truck, but I could not stop. I was transporting ammunition, and the attack could have been an ambush for my cargo.

I lost a friend who died in my arms. We were in a firefight, and I was praying for him to live. But then the flares went off overhead, and I saw blood coming out of his eyes, nose, and ears. I saw where his skull was cracked. I realized if he lived, he would be a vegetable … And I found myself praying for him to die.

Of all the painful things I had to deal with in therapy, watching my friend die is up there at the top of the list. The camaraderie in a combat zone is stronger than even blood ties.

Once, while on a search-and-destroy mission, we had unknowingly set up our camp right on top of a Viet Cong underground tunnel complex. The enemy kept popping up in the middle of the night shooting AK-47 rounds into our camp and bunkers. After meticulously searching the area for two days, we finally found the trap doors that led down into the tunnel complex.

Someone had to go in and take care of business and I was small enough to fit into the two-foot wide trap doors. I became a “tunnel rat,” with a flashlight in my left hand, and a .45 in my right. My goal was to search and destroy, and to clear the tunnel.

Those tunnel complexes were heavily booby-trapped and designed to take out intruders. For every 10 military dogs that got sent into the tunnels, an average of only two survived. It was a low survival rate for soldiers, also.

When I went in, my movements were very slow. My eyes were trying to adjust to the darkness; my ears seemed to be able to hear the sand move under my body. My hearing seemed to stretch out into the darkness. I could hear myself breathing and thought, I’m too loud. As I moved forward, feeling with my hands the sides, the top, and the floor, I thought, Stay calm, careful. Be ready for anything. God, please help me.

There were trip wires and little grass mats covered by sand to conceal bunches of sharp bamboo sticks that had been dipped in poison. But they didn’t get me—I made it out.

I felt hands patting me on the back as we knelt down to examine the treasures I had brought up—some old, worn maps; three Chicom grenades; a M1 carbine rifle. After that day, everyone (including the officers) called me “Snake.”

It was the third tunnel I entered later that would haunt me the most. It had enemy inside. The three Viet Cong decided to escape through another exit and perish at the hands of my fellow Marines instead of confronting me—why they chose to do this is a question I can never answer. I acknowledge it as Divine Intervention.

It is a miracle that I made it out of that insane war.

When I was at the VA hospital in 1984, part of my treatment was exposure therapy where you relive a painful experience to get control over your feelings about the trauma. In “flooding,” you talk about a lot of bad memories at once. It’s called flooding for a reason: the tears.

Therapy triggered so many memories and opened up my mind like a river. The sight of dead Viet Cong soldiers, especially the children and elderly, kept coming back to me. The Viet Cong child soldiers (some as young as 12) and the grandma and grandpa soldiers made it really hard for me to put the Vietnam War behind me. How can you really justify war? It was a no-win war for them and for us. They fought for a cause that they thought was right, and so did we. They fought with courage and tenacity, just like us.

Talking about what happened in Vietnam took me right back there. The adrenaline would kick in, and I’d go into combat mode. I felt locked up with anxiety and all these emotions. Then, instead of sleeping around the clock, I hardly ever slept.

Slowly, I started to talk with other patients, the therapists, and nurses. I was discharged from the hospital after three months of treatment.

But Vietnam remained at the surface. Once I was on the outside again, I was really afraid. Now all my issues weren’t buried and repressed. The flashbacks were just as intense as the experience itself. I was alone in a world that did not seem to care about or understand me as a Vietnam veteran.

I still had a hard time sleeping. I still felt extremely anxious in crowds. I had zero tolerance for listening to people talk—whatever they said seemed so unnecessary and unimportant. I completely shut myself off from my family, my (few) friends, and society. I was out of sync with everyone. Thoughts of suicide began to whirl about in my mind. I had no hope of ever living a productive life again.

On my way back to the States, I saw a jacket—I think it was in a shop at the Da Nang Airport. On the back of the jacket was a map of Vietnam and it said: “When I die, I am surely going to heaven because I served my time in hell.” I bought the jacket.

Vietnam was hell, but it turned out I had to fight in another war. In 1984, I headed into the war within.