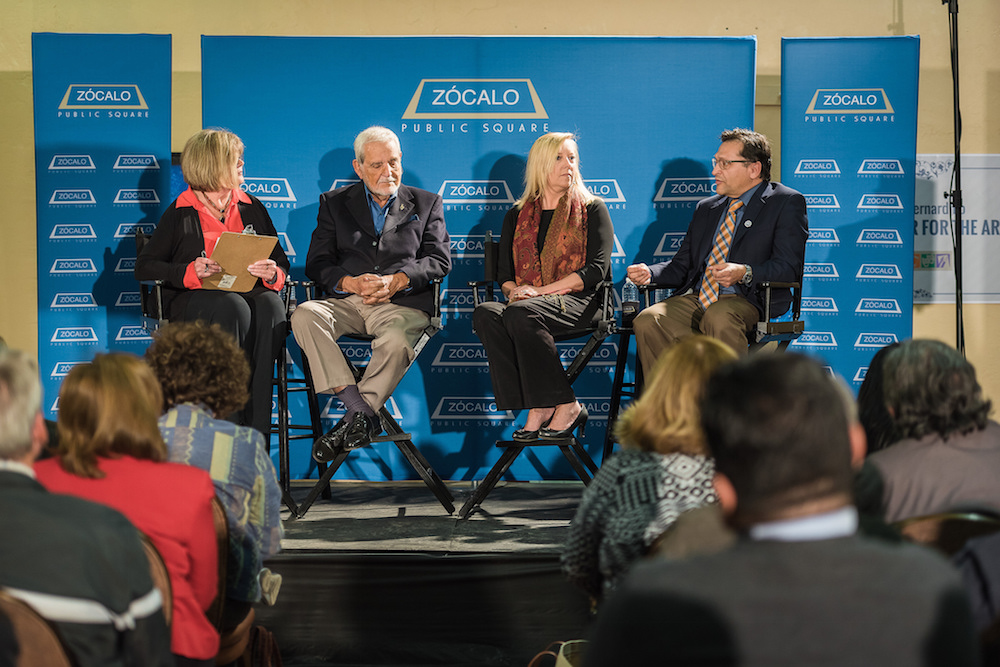 That was the conclusion of a panel of local arts and civic leaders at a “Living the Arts” event co-presented by the James Irvine Foundation at the new San Bernardino Garcia Center for the Arts, which opened in an old water district building just three days ago. The new venue has inspired a sense of possibility about the city’s arts scene that shaped the conversation.

San Bernardino Sun reporter Michel Nolan, the event moderator, said the city is experiencing a “creative revival.” Panelists said that revival includes more cooperation between arts groups, schools, and artists, a stronger city arts commission, and greater participation in arts projects by young people (especially via a group called Generation Now). It’s also reflected in the work of photographer Tom McGovern to capture San Bernardino and its people, which has been displayed in local storefronts, some of them abandoned.

San Bernardino’s city government is still in bankruptcy and the city has been the subject of recent L.A. Times coverage about its poverty. But the event was rich in conversation about specific ideas for boosting San Bernardino and its arts.

Ernie Garcia, a retired education school dean at California State University San Bernardino and a leader in creating the new arts center, praised the city’s progress, but said there was much more work to do.

He said the city’s fine arts commission requires greater clarity in its accounts and how it spends money. He also said San Bernardino needs to create opportunities so the creative people who attend its schools and universities can make a living in the arts here.

And, to applause from an appreciative audience that filled the room, Garcia suggested that local investors could acquire dilapidated buildings between the original McDonald’s (a landmark and tourist draw) and the new arts center, and turn those buildings over to local artists—creating an arts corridor of sorts. He said that Paducah, Kentucky, had done something similar with its LowerTown Arts District. And he suggested capitalizing on San Bernardino’s base of skilled woodworkers—noting that the arts center’s beautiful ceiling wood beams had been made locally—to develop new woodworking art forms that could define the city artistically.

Valerie Peister, the director of community engagement for the Redlands Community Music Association, who previously worked for the San Bernardino Symphony, said that San Bernardino should prioritize access to the arts, as the symphony has done in the past through ticket scholarships and its Mosaico Arts and Music Festival.

Peister said the Mosaico festival had been successful in part because its organizers held community conversations to gather ideas and collaborated broadly across arts fields. “The groups that were part of the conversations then became part of the events,” she said.

In response to a question from Nolan about arts efforts in other cities worth emulating, she suggested that San Bernardino offer outdoor concerts and performances with no admission charges, as in nearby communities like Redlands and Fontana. “There’s something about the arts in a community that sparks the human spirit,” she said.

Juan Delgado, a poet who is a professor and interim provost at California State University, San Bernardino, said the city needs to give more recognition to artists and arts-minded people who have kept the arts alive in the city, particularly through murals and street art. He also said that, after years of funding cuts, local schools have started to offer more arts at various levels of education.

“We know that if children are exposed to the arts early and often, they’re going to be arts lovers,” he said. “I think there’s a movement toward that.”

Delgado said that, on a recent visit to Scotland, he’d encountered an arts festival in which corporations, bars, grocery stores, and other local businesses sponsored a local artist for a week; he’d like to bring the idea to San Bernardino. “Could you imagine if we asked some of our store owners?” he said.

During the question-and-answer session, audience members enthusiastically thanked those who had started the new arts center. And panelists and audience members exchanged ideas for how to get more funding for the arts—from foundations, businesses, real estate investors, and the city government as it emerges from bankruptcy.

One of the audience members, who identified himself as Cesar Gomez, asked, “Do we have any grant writers in the house?” 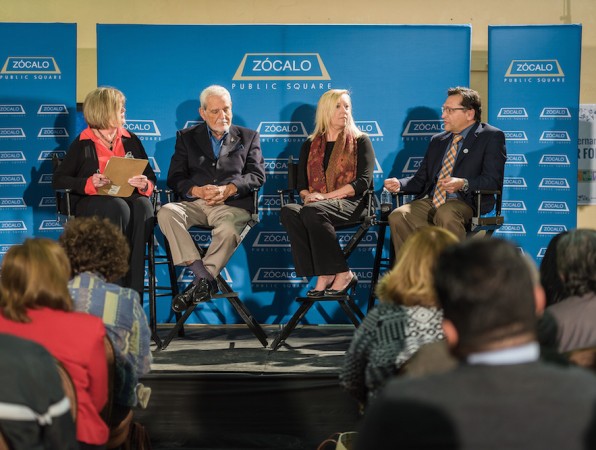 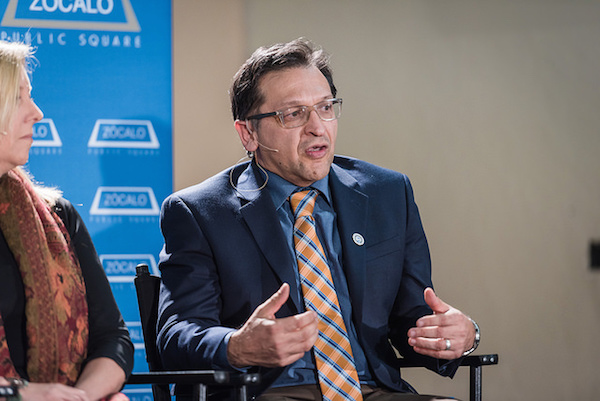 "This Is San Bernardino” co-creator, poet, and panelist Juan Delgado 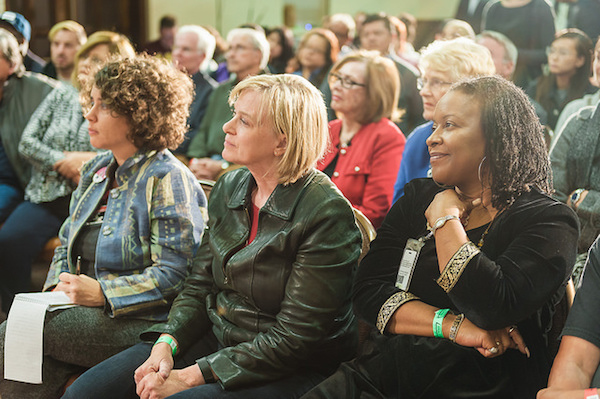 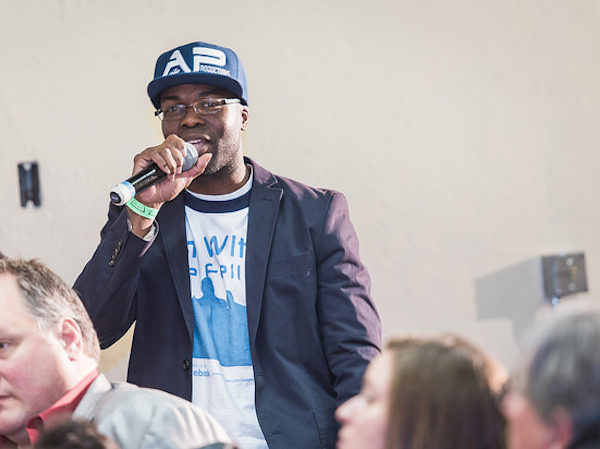 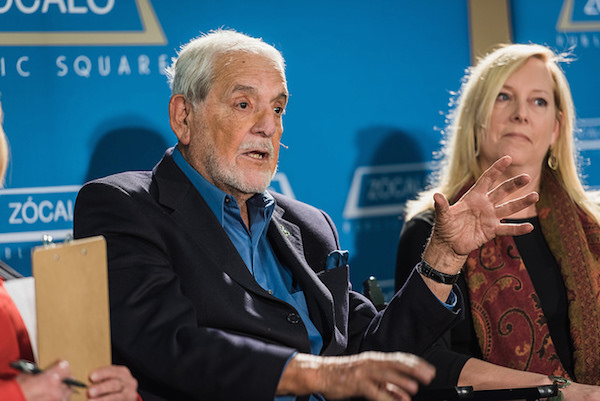 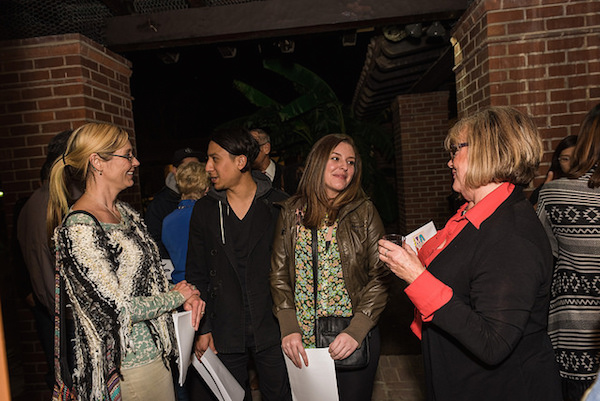