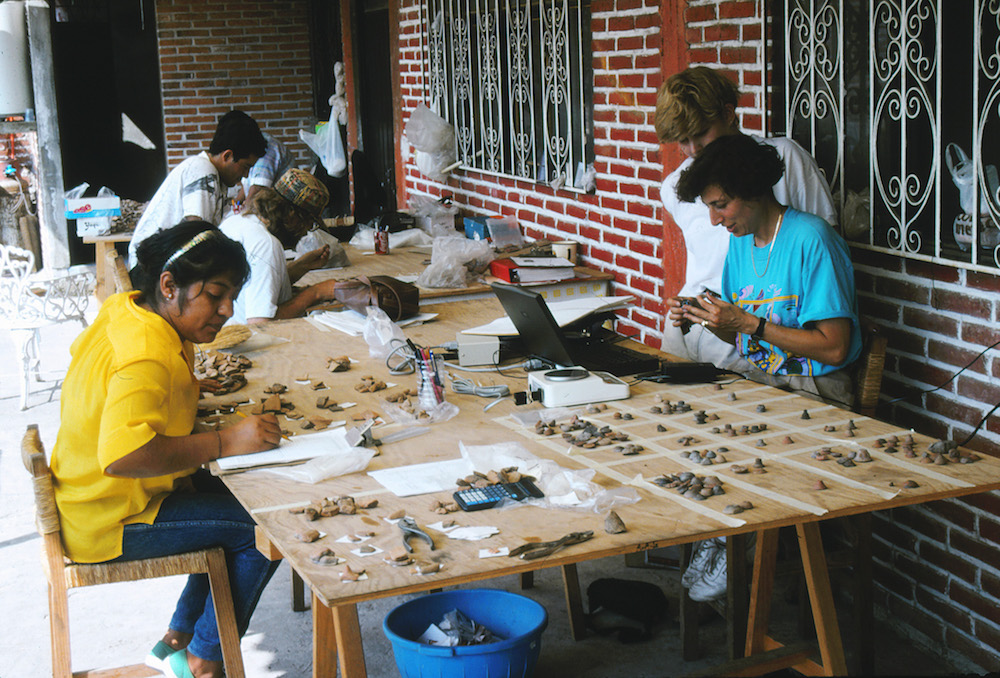 For years I was too embarrassed to admit how I first got interested in the Aztecs and Mayas. Now, as an archaeologist who has directed excavations at Aztec sites for decades, I can come clean. In college, I read a book of fringe historical ideas claiming that when the lost civilization of Atlantis sank into the sea, its people set off in boats, made it to Mexico, and gave birth to the ancestors of Aztecs and Mayans. I thought this was the coolest tale. I dropped my majors in music and math, and started taking classes in anthropology and archaeology. By the time I realized how silly the Atlantis story was, I was already hooked. I jumped at an opportunity to do archaeological fieldwork one summer in central Mexico. At first it was a lark, an undergraduate adventure, but I quickly fell in love—with the country, the people, the food, the music, and—of course—the archaeology.

I often marvel at how a schlocky choice of leisure reading began a lifetime of involvement with Mexico. I also marvel at the irony of being seduced by such fantastical theories, when my lifetime connection to Mexico became focused on everyday life—that of the Aztecs I was studying, as well as my own family’s.

I married an archaeologist, and our daughters April and Heather spent much of their childhood in Mexico. My wife Cindy and I decided that Cuernavaca, about a two-hour drive south of Mexico City, would be a good base for fieldwork. It’s a modern city with good schools and hospitals. The fact that it was a gorgeous city (“La ciudad de la eterna primavera,” or “city of eternal springtime”) didn’t hurt. Most important, there were numerous Aztec-period peasant villages in the area I could excavate. 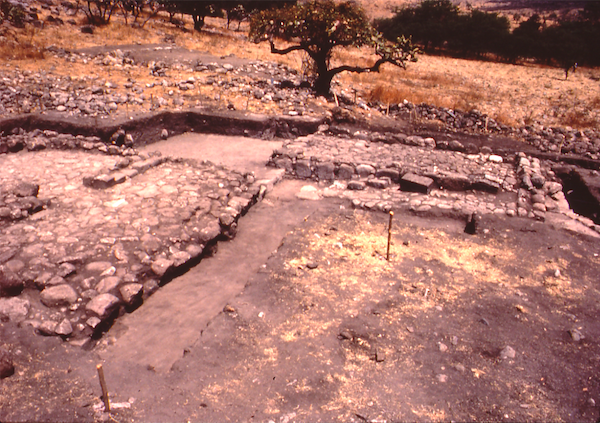 Wall foundations of Aztec peasant houses the author excavated at the site of Capilco.

My choice puzzled many colleagues. Archaeology in Mexico has traditionally focused on the big ruins—Teotihuacan, Monte Albán, Chichen Itza. “Aztecs” equal pyramids and palaces to most people. Indeed, one such site—Teopanzolco—was literally in the middle of Cuernavaca. But I wanted to figure out what life was like for Aztec farmers and other commoners. Most written sources on Aztec history—texts by Spanish friars and native historians—deal exclusively with kings and nobles, the one percent of Aztec society. What about the 99 percent? Instead of searching for pyramids and tombs, I sought out the crumbled remains of small adobe houses. I excavated trash heaps of broken cooking pots and kitchen knives. (We archaeologists who study ancient households are obsessed with trash, because it is our window into daily life).

However boring or ordinary it seems, my unorthodox focus on villages and kitchen trash yielded big results. It contradicted some longstanding assumptions, including the notion that average Aztecs, oppressed by nobles, lived in abject poverty and had few choices in life. The people who lived in these sites were fairly well off. They had many imported items in their homes, and they owned goods in the latest styles of Aztec society. 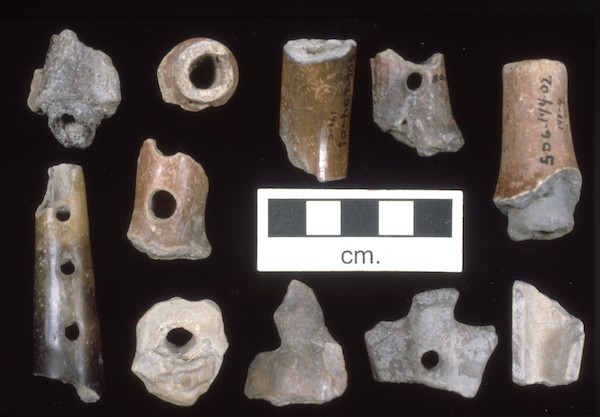 The Aztec communities that we excavated—often digging in people’s backyards—had been prosperous and successful, something I hadn’t anticipated. Indeed, these ancient farmers devised an economy based on local resources, one that operated at a small scale yet linked to broader realms through trade and exchange of knowledge. That is, the Aztecs had discovered the sustainability principles of “deep economy” long before Bill McKibben wrote a book about it. A house-by-house census written in the Aztec language (Nahuatl) provided the final clue to their success: These farmers belonged to a kind of community council called a calpolli, which gave them freedom to farm and live as they wished, without kings and nobles bossing them around.

Meanwhile, my family’s everyday life was also enriched by the Aztecs. We adopted Mexico as a second home. We would pile our tools, gear, and April and Heather into the car every year for the drive from Arizona to Cuernavaca. Sometimes we went for a semester or a year; we almost always spent the summer. Cindy and I did fieldwork or studied artifacts in the lab, and the girls went to school or played with friends in the neighborhood. 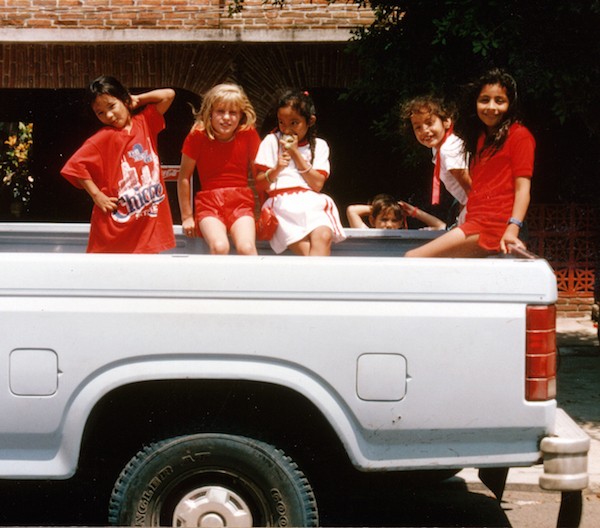 The author’s daughter Heather and her neighborhood pals heading to day camp in the author’s truck.

We always boiled water for drinking, cooking, washing fresh vegetables, and brushing teeth. Boiling water was a big deal in our daily routine, taking up hours of stove time every day. But although we lectured the girls about clean water and contamination, April and Heather both went through a period of nearly constant intestinal ailments—from simple diarrhea to amoebic dysentery. We became close to our neighborhood pediatrician. I recall carrying 5-year-old Heather down the street to the doctor because she was too sick and dehydrated to walk. Many years later, after they were grown, the girls made a devastating confession that clarified a lot: “We used to drink water from the garden hose with our friends.” You know, because they weren’t supposed to do so.

While in Mexico, our girls experienced extremes of poverty and wealth they didn’t see in our middle-class American life. The laborers in our excavations were campesinos or farmers from a nearby village. Cindy and I got to know families in one village quite well, and we became compadres with several couples: We formed very close, if formal, social bonds with parents and sponsored their children, either in religious sacraments (baptism or confirmation) or in more secular activities (graduation from sixth grade). We bought the bride’s dress for one wedding, we paid for the band at another. April and Heather had many friends there and witnessed humble rural life first-hand—sleeping in an adobe house with a dirt floor, for example, and being awakened in the morning by pigs trying to push the door in.

Mexico’s affluent also inhabited a world we’d never before experienced. Once our girls were old enough, we enrolled them in a private school in Cuernavaca, the Instituto Oxford. The tuition put a big dent in our income, and I think we may have been the poorest family at the school. April and Heather let us know that we were the only ones at the school without servants. The girls’ friends from school lived in mansions nestled behind security gates and graced with pools and tennis courts. Maids cleaned up after sleepover parties. Their parents spoke both Spanish and English and regularly flew to Texas to shop.

But regardless of class divides, Mexico warmly embraced my family, and provided all of us with a wealth of experiences, in addition to a rich culture and a second language. I’m eternally grateful I picked up that book so many years ago, in search of Atlantis. Fruitful quests, and inspiration, can often be sparked by the most seemingly inconsequential of choices. Our time in Mexico taught us that both archaeology and family benefitted greatly from a focus on everyday surprises.