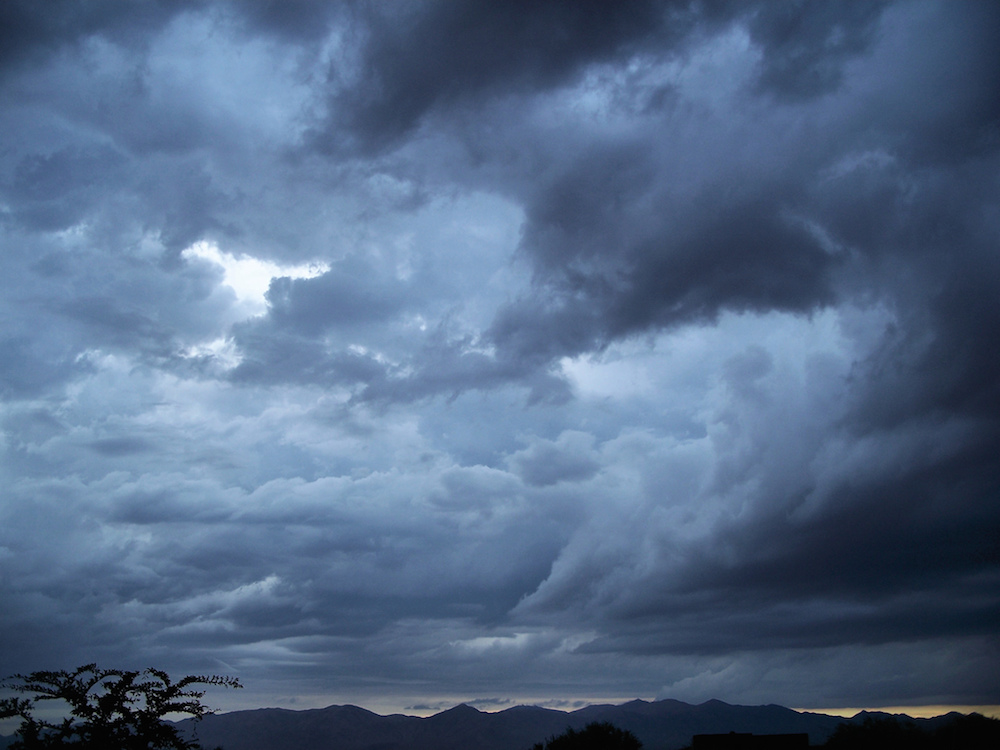 Living in a desert city like Las Vegas, you can forget about rain—not as in “give up hoping for,” though sometimes that, too, but actually forget. Your umbrella gets buried in the closet along with table leaves and old bike helmets. The rare morning when you open the door to gray drizzle, it’s a little flustering: an improbability realized and you’re wearing the wrong shoes.

Preparing to face the elements here usually means sunblock and a hat. A colleague in the English department at UNLV teaches the concept of “the sublime” by telling students to walk outside in summer. Need to be reminded of human mortality in the face of nature’s power? A blast of dry heat will do it.

I grew up in Phoenix—where the excitement of a stormy day could blot out concentration and the heat created a lot of time for indoor reading and dreaming about rainier places. Now that I teach poetry in another Sun Belt city, I’m reminded about rain’s particular power in the desert. It’s not only that I’ve seen it come down in monsoons that cause flash floods and stop traffic. I’ve also heard it beating through the poems that made me love poetry, the poems I share with my students.

“The weather is made for us partly by writers and artists,” whose preserved responses to “its fleeting effects” we project onto lived encounters with rain, wind, sleet, snow, and sun, writes Alexandra Harris in her history of artistic responses to wet English weather. The insight applies to other weathers, of course. And to get caught in the rain in literature is to tune in, if at a distance, to an activating force for the thought and flow of poetry.

There’s an obvious, elemental truth linking rain and creative genesis. We can’t live without rain; it is life-giving, life-sustaining, though too much or too little brings disaster. When artists run out of ideas, we say they’ve hit a creative dry spell. The converse is also true: When poets write about thinking, they often write about rain. It becomes a soundtrack that invites—or even in some way resembles—thought, and that thinking-through to the beat of sound is the seed of all poetry.

Rain sets in motion two of the most famous opening passages in English poetry. April showers kick off pilgrimage season in The Canterbury Tales (“Whan that Aprille with his shoures soote”), and the damp returns with the first lines of The Waste Land, “mixing / memory and desire, stirring / Dull roots with spring rains.” The link between rain and verse feels almost primeval: Rain marks winter’s thaw, a reanimation of the landscape, and as it melts ice and stirs roots, it also gives metaphor to a writer’s mind rousing into language.

The rain’s force can drive a poem forward. The beating of “Rain, midnight rain, nothing but the wild rain,” in a poem by Edward Thomas sweeps me into the meditation. And poetry’s rains can be brutal: Witness the S&M “whip rain” wielded by Hurricane Katrina in a Patricia Smith poem or the city shower that turns London streets into a flood of “dung, guts, and blood, / Drowned puppies, stinking sprats, all drenched in mud” in Jonathan Swift. Even where Swift finds the rain and its effects gross, they propel the writing. “Ah! where must needy poet seek for aid, / When dust and rain at once his coat invade?” He may complain about rain, but the words flow.

So what precipitates once rain has started to come down? In A. E. Stallings’ “Whethering,” a poem whose punning title matches worry to weather, rain’s patter triggers memory and regret by acting as a kind of poet, “typing” on the windowpane. In Robert Creeley’s “The Rain,” it awakens a self-criticism as unrelenting as the fall of raindrops. But by the poem’s end, his rainy night meditation has also cleansed him and brought him closer to tenderness and intimacy: “Love, if you love me, / lie next to me. / Be for me, like rain.”

Gertrude Stein’s great love poem and poem about thinking, Stanzas in Meditation, takes rain a step further in translating its patter as speech:

That it is now that it is there
The rain is there and it is here
That it is here that they are here
They have been here to leave it now.

Stein’s quick, light monosyllabic words “enact” rain, as poet and critic Joan Retallack writes, rather than describing it. Stein’s rainy lines are monotonous, repetitive, but also shifting, changeable, like weather itself. With the many “small hands” e. e. cummings once attributed to rain, this rhythm conveys in pantomime Stein’s sense of what thought and love are—not a sudden flood, but intermittent gust and omnipresent shower.

Where water is lacking, the need to summon rain’s metaphor for thought persists. Listening intensifies. The Welsh writer Gillian Clarke keenly feels its absence. Addressing a fellow poet in “A Recipe for Water,” she writes:

You imagine me writing in the falling rain,
rain on the roof, writing in whispers
on the slates’ lectern,
rain spelling out each syllable.

Her correspondent—like me, a resident of a hot climate—takes pleasure in imagining what it would be like to write to rain’s proxy poetry. But Clarke’s usually rainy corner of the world disappoints, “day after day / no huff of rain / on the roof.” The silence is painful because it alters a familiar fact of home, and it reminds her that drought is increasing worldwide.

As a desert reader, I feel that absence, too. I am grateful for poetry’s rains, for being able to imagine others elsewhere writing and thinking to them, and also for the days when rain’s “huff” comes even to Las Vegas and I get to read or teach listening to its fall. I know that imagined rain can be a powerful, sustaining thing, but eventually readers and poems want the real thing.