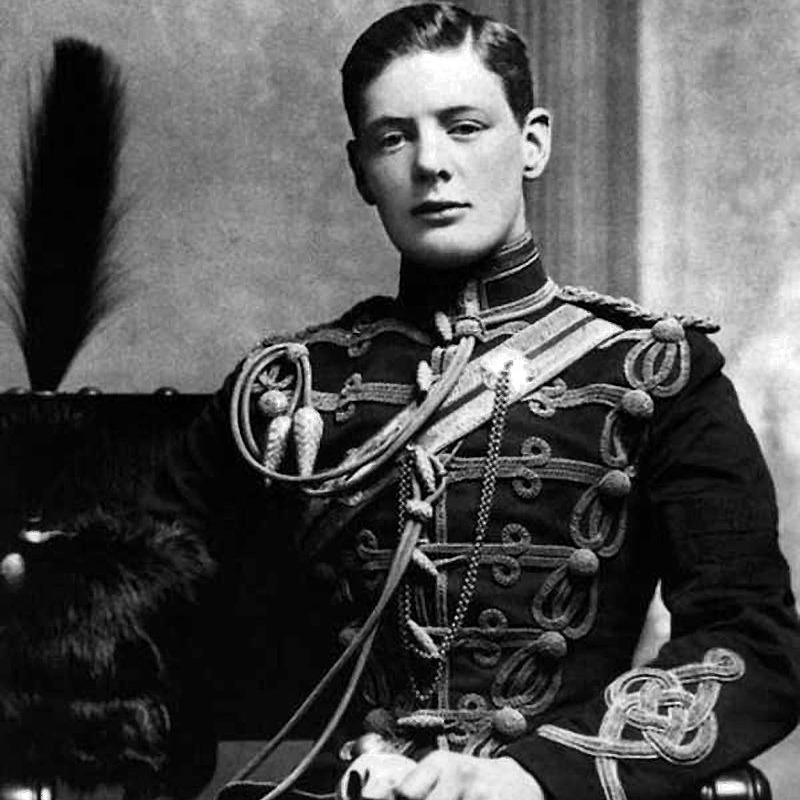 If you were disappointed to see Downton Abbey come to an end on PBS this past weekend, the good news is that the producers of this sensation on both sides of the Atlantic have optioned the rights to another series featuring an even more dazzling cast of Edwardian English aristocrats.

In this one, the characters are all drawn from real life. There is a fabulously wealthy heiress, a beautiful actress, a boyish cad married to a woman almost twice his age, an American-born duchess, and a polo-playing future prime minister.

The bad news is that young Winston Churchill is the future prime minister, and the star of this proposed new series, which, if the powers of British broadcasting give the green light, will be called Young Titan.

But, hold on, how can Churchill’s place in the drama be anything but good news? Isn’t he one of the undisputed giants of modern history? Wasn’t he also a surprisingly dashing, slender, and athletic figure (blue eyes, full head of hair) in his early days—and a celebrated soldier, war correspondent, and the wittiest politician in England?

Yes, he was all of those things, and much more, with a romantic streak that led him to pursue several of the most desirable beauties in Edwardian London. But if you’re in charge of programming at one of the big British networks, you have a problem with Winston.

Never mind that the accomplished producers at Carnival Films—the makers of Downton Abbey—want to do the series, and have in hand a great script from one of England’s finest novelists, William Boyd, whose Any Human Heart was Carnival’s biggest hit before Downton. The only thing that really matters in Britain today is that this Churchill fellow is a bit of an embarrassment. He was too upper-class, too old-fashioned, too patriotic, too militaristic, and—worst of all—too highbrow.

For so many Americans, an evening of watching the British aristocracy at play in costume dramas is a harmless pastime. For some of us, it’s downright addictive, which is why the Masterpiece series on PBS is still going strong after almost 50 years.

We can tolerate the vices of the British upper classes because their social dominance over there has no relevance here. For us, they are fantasy figures, but for many in Britain they are all too real. Class is one of their obsessions, not ours. All those posh accents don’t grate on our ears the way they do with so many people in England, where—as George Orwell once observed—most people go through life with an accent so defining that it’s as if they were “branded on the tongue.”

British resentment of Churchill may seem incomprehensible to us. Even an old socialist like Bernie Sanders recently named the wartime prime minister as one of the historical figures he admires most. But, in Britain, half a century of ridicule has rained down on Churchill’s name, disparaging him as a privileged snob who cared more for the aristocracy and the Empire than for the common people.

He waged war so ruthlessly and recklessly, the criticism goes, that he caused far too many innocent lives to be lost, and wasn’t much better in the end than the fascists he was fighting. In some quarters of British society, a drama featuring a romantic young Winston is likely to be greeted with howls of outrage against the “warmonger” whose name can’t even be mentioned without a grimace of disgust.

It probably doesn’t matter to such critics that young Churchill was a leader of the Liberal Party in his Edwardian days, a devoted social reformer widely attacked by the upper classes for his eagerness to help the poor. Or that he was a man who refused at every stage of his life to accept an aristocratic title, when scores of his more left-leaning colleagues were easily seduced into becoming earls and barons. Only reluctantly, in old age, did he accept a knighthood, and then because he considered it a reward for actual achievement.

I know a little about Churchill because I wrote the book that Boyd has turned into a script for Carnival Films. Three years ago, when my Young Titan: The Making of Winston Churchill was published, I thought—in my American innocence—that the story had cinematic potential as a sweeping tale of a young man’s rise to prominence in an imperial age when London was widely seen as the capital of the world. My Winston wasn’t towing around the baggage of his controversial history in the 1930s and 1940s. He was just a handsome lad trying to climb the greasy pole of political power in a glamorous world full of fascinating men and women, not least of whom was Churchill’s American mother Jennie, whose many lovers included King Edward himself.

A staff member at Carnival Films told me that Young Titan was a “no-brainer” after Downton Abbey. Within a few months, a script had been commissioned for the first episode of a six-part drama, and in early 2014 Boyd completed not only that script but also a detailed outline of the other five episodes.

Over the next few months, two major British networks were given the chance to let Carnival produce a quality series, with the potential of adding more awards and cash to the haul already created by Downton. A production budget wasn’t an insurmountable problem. Most of the story could be filmed on location in London and in the studio.

But after long delays and intense discussions, the project—like so many in the highly competitive world of television—ran into trouble with fickle network executives, and now the whole series is in limbo. As any number of disappointed authors will tell you, the networks and large studios will rarely give you a clear reason for their decisions. The email messages just stop coming. No one has actually said what is now obvious to me—that fussy old Lord Grantham and his lovable servants at are easier to sell to the British public than the outspoken Winston and an Edwardian world filled almost entirely with stylish upper-class ladies and gentlemen. A critical docudrama of Prime Minister Churchill is always possible, but even a modestly admiring treatment of the younger man is politically suspect and inherently controversial.

Young Titan is the opposite of that perennial formula of the classic series Upstairs, Downstairs. With all the focus on politics, fame, fortune, and love among the well-to-do, my story has too much upstairs, and very little downstairs.

But an even greater problem with Young Titan, I suspect, is one that bedevils the cultural scene on both sides of the Atlantic. Wherever you are, it’s becoming increasingly difficult to present the life of a major historical figure as simply a human story of its time. Instead, we all want to see history through the lens of our own time. That’s often a good thing, but it threatens to rob history of much of its special appeal—the pleasure of immersing ourselves in a world not our own.

I don’t want the Victorians or the Edwardians to be like us. I want them to be exactly as they were, warts and all, and I want to be free to see them in the context of their time, not mine. Unfortunately, too many of us live in an eternal present where last year is ancient history, and we are too easily shocked by the manners and attitudes of that great gulf of time often dismissed now as “back in the day.” It is a joyless study of the past that keeps score of whether this figure or that measures up to the expectations of our world.

I couldn’t invent a better, more complex character for the stage than young Winston, but in offering his unabashedly romantic story, I didn’t foresee that the stage was, apparently, no longer ready for such a man.