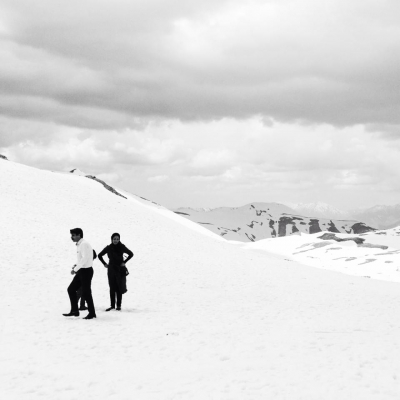 A family gathers near the summit of Mount Tochal near Tehran 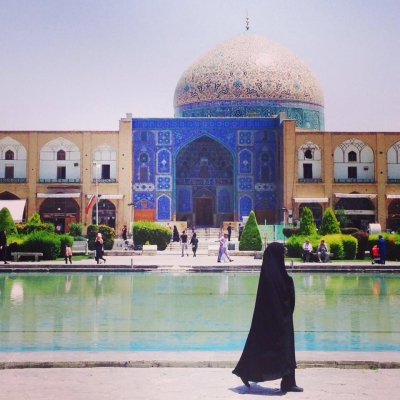 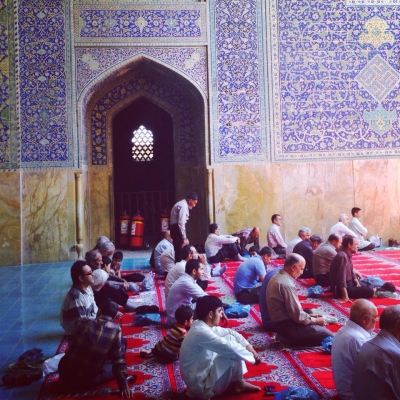 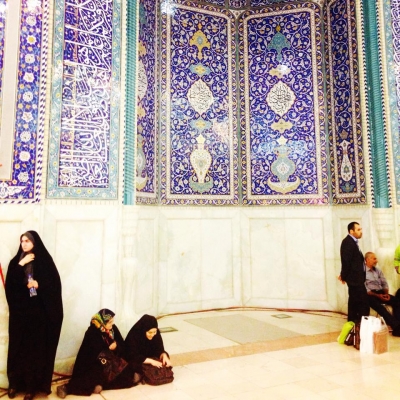 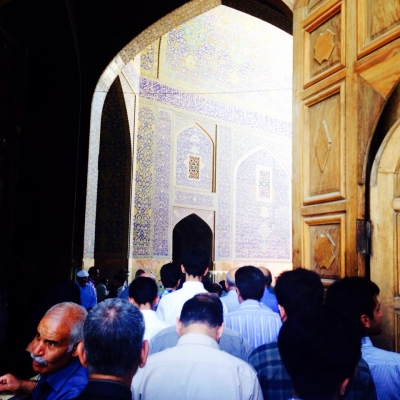 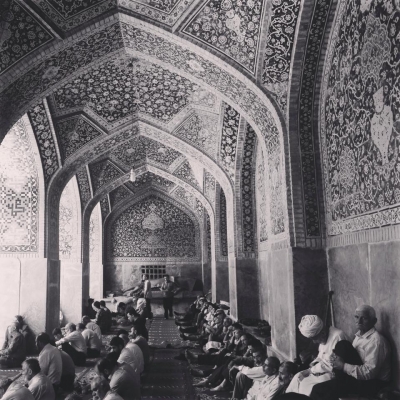 "Esfahan is half the world" - Iranian proverb 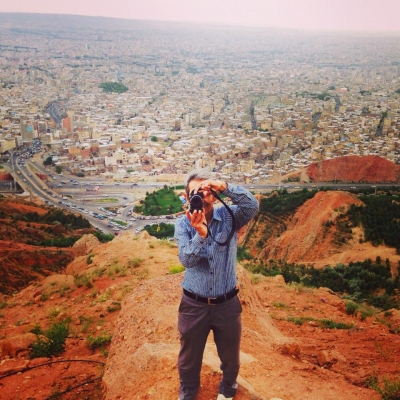 My uncle in the redbrick mountains of Tabriz 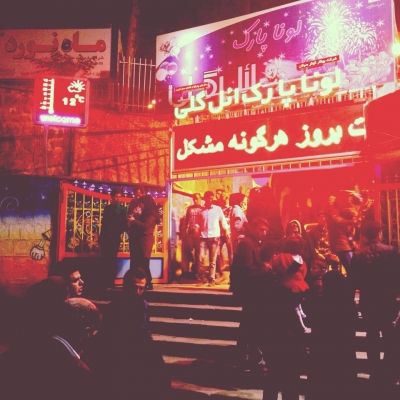 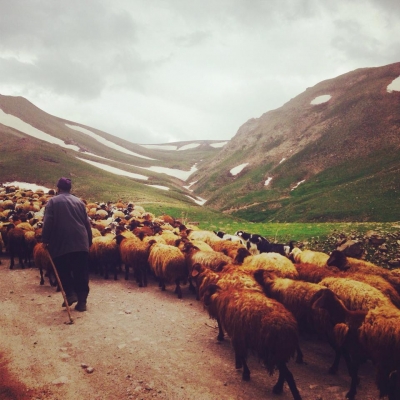 A shepherd leads his flock through the Sahand mountains, Azerbaijan province 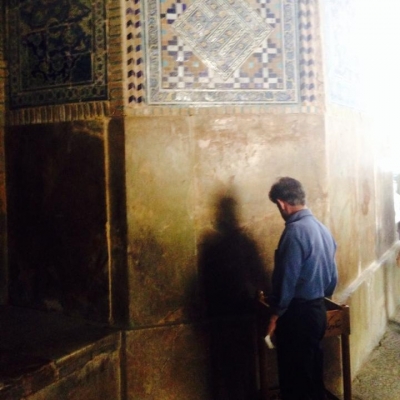 A worshiper in Esfahan chooses a Turbah stone, a clay tablet used in the prayer rituals of Shiite Islam 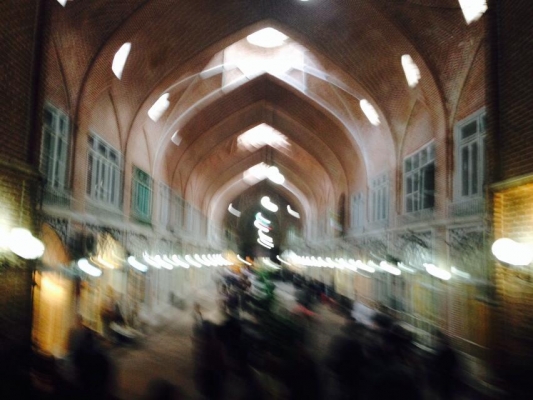 Tabriz Bazaar, the largest covered bazaar in the world and one of Iran's UNESCO world heritage sites

It was late April, and the snow had only just melted in Meygoon, a mountain town north of Tehran.

I had arrived in Iran the night before and was staying with a family friend. The Afghan housekeeper, Ata, invited me to play indoor soccer with him and his friends at the local sports hall. I was in goal. The whole team consisted of refugees from the war in Afghanistan, a million strong in Iran. They spoke to each other in Dari, the Afghan dialect of Persian, and I struggled to understand what they were saying. Afterwards Ata invited me to have tea, and although we didn’t have much to say I was happy to sit there in silence, cross-legged on the carpet, taking it all in. I was finally back in my father’s country.

I had been trying to come to Iran for several years. The memories of my childhood visits were fading and I wanted to refresh my understanding of a complex country. Above all, I wanted to find out how Iranian I really am. Military service, compulsory for all Iranian men, had so far prevented me from making the trip as an adult. But a recently passed law affecting the diaspora meant I was eligible for a temporary exemption, and I came as soon as I could. For nearly two months, I traveled across Iran taking photos, and I found a very different place from the menacing geopolitical actor you read about in Western newspapers.

I spent another night in Meygoon, and then went to stay at my aunt’s house in Tehran. You would never know, unless you visited, how marvelously self-made the city is. Or how the freeways, the smog, and the mountains will remind people of Los Angeles, where I went to high school. Even the socio-economic topography is the same—the rich drive Maseratis in the northern foothills and the poor fill the southern plains. No wonder Tehranis love L.A. In it they must see an ethereal mirror image of home.

Like everyone else in Tehran, my friend Kasra drove like a lunatic. It was the kind of driving that made you press down on an imaginary brake in the passenger seat. Eventually one of his stunts left too little room to stop, and he hit the old white car in front. Not hard, but enough to leave a few scratches on the bumper. But a moment later, when the lights turned green, both parties drove off as if nothing had happened. I asked, “Aren’t we going to stop?” Kasra laughed at me. “For that? No, we don’t stop for such small things in Iran. I was just saying hello.”

After a few weeks fattening up on my aunt’s perfect rice, it was time to move on. Besides, she had a crazy white parrot who said khodahafez—the word for goodbye in Persian—every time I walked past its cage. The bird seemed to have something sinister planned for me, so it felt like a good time to go.

I took a 17-hour train to Tabriz, my father’s hometown, famous for its summer wind. There, in the bazaar, the old men sold polished pears and the boys pulled pistachio carts through the crowds. I went off in search of a backgammon set to buy, but I got lost in the endless gold quarter. The merchants stood catatonic behind their stalls of riches. It seemed to me that men who handle treasure all their days can no longer see the value in that which does not shine.

I stayed in Tabriz for several weeks. Many of my days in the city were spent visiting distant relatives I pretended to remember.

My dad’s childhood home had been turned into a beauty salon. At the top of the stairs, where my grandfather collapsed and died, women waited to have their hair cut. Nothing truly belongs to us, at least not for long. No space or place. The old rose garden, where my sister and I played badminton throughout the long summer of 2001, had become a parking lot.

From Tabriz, my cousin and I, accompanied by his friends, drove to Esfahan, the great city of medieval Persia. We stayed with a relative who had four beds for the five of us. In Iran, it’s compulsory to offer things to others, even things we don’t want to give. Each man insisted and swore that he wanted to sleep on the hard, uncomfortable floor. “It’s good for my back,” one said. “I don’t even like beds,” said another. Eventually I was the first to accept a bed, which showed I’m not a real Persian. In the morning I woke to find three empty beds and four men sleeping on the floor, shoulder to shoulder.

In the square outside the great mosque in Esfahan, families picnicked in the dying grass, and from the minarets the muezzin sang to the faithful. Shiite Islam is a religion of mourning, and it suits the Iranian character. Sometimes I think this country is the most melancholy I’ve ever seen, and perhaps the most beautiful. An elegiac land peopled by poets and heavy with history, made generous by its sorrow. On the drive back north, as I neared the end of my journey, I found myself already thinking back to what I had seen, wistful for something barely past. For all the ways I had proven myself to be a foreigner, I had long ago inherited the country’s collective nostalgia. In that sense I am Iranian indeed.