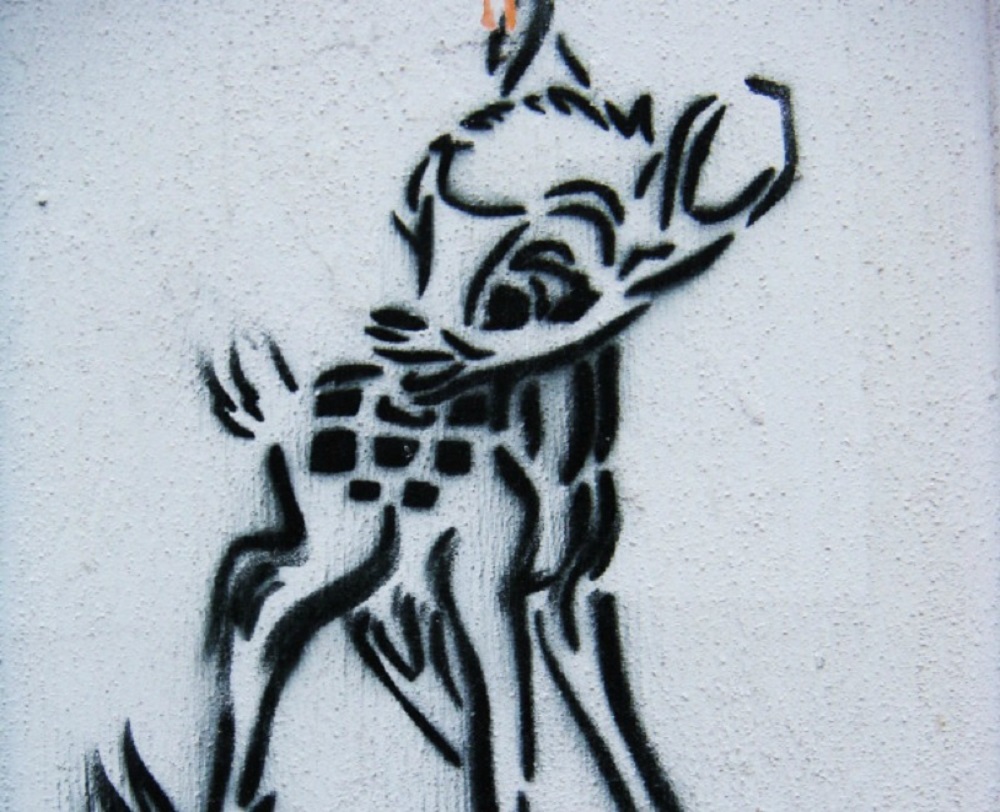 Perking up her ears, the dog was the first to notice them, just a few blocks from our homes in east-central Illinois. One-by-one the does strolled from the woods into the meadow. They eyed us without lifting their tails, seemingly habituated to this neighborhood. Their appearance awed us but also prompted different responses. Joseph recalled long past hunting trips four miles south in a tree stand overlooking a soybean field and tried to pick out the fattest doe in the group. But Robin remembered watching Bambi at a theatre birthday party at the age of six. That brought her, the birthday boy, and the other female guests to tears, wondering if our mothers might be next.

These contradictory responses suggest the lingering strength of the Bambi myth, the lasting legacy of Walt Disney’s 1942 cartoon about that big-eyed fawn. Seventy-four years later, Bambi’s worldview still animates debates over animal rights and environmentalism: Should we save Bambi or save the earth?

Bambi didn’t start as an American environmental fable. Written by an Austrian author with the pen name Felix Salten for adults in 1928, Bambi: A Forest Life, recounts the story of a fawn who grows up to be the prince of the forest alongside his royal father. But his rise to power comes only after the death of his mother and near loss of his mate Faline. While hunters are a problem for these deer, so are animals: In the forest, owls eat mice, crows eat a friendly rabbit, and a fox eats a duck. Early reviewers considered the book an anti-fascist fable and more recent writers have speculated that the story was an allegory about the plight of Jews in Europe. All of Salter’s work was eventually banned in Nazi Germany.

By 1942, when Disney released the film, Americans were processing their shock at the attack on Pearl Harbor and our entrance into a world war, which is reflected in the film’s simplified portrayal of deer living in an idealized forest where predators and prey play together and fear only a shadowy character called “Man,” who is equipped with guns and fire.

The emotional punch of Disney’s Bambi is heightened by its artistry, which combines gorgeous natural realism with cartoonish animals, their exceptionally large heads, small noses, and wide eyes resembling human children. Disney gave Bambi playful friends like the rabbit Thumper and the skunk Flower, in contrast to the more melancholy, quarrelsome animals of the book. Even though these cartoon animals frolic to the tune of “Little April Shower,” Disney paid special attention to the details of the forest, sending artists to sketch foliage in Maine’s Baxter State Park and shipping two fawns to the studio as artist’s models. This uncanny mix of cuteness and terror and fantasy and realism has led some to call it a horror film.

When it was released in 1942, Bambi the movie was surprisingly controversial, but not for the same reasons as the book. Hunters in particular saw it as an ideological threat. Outdoor Life editor Raymond J. Brown called the film “the worst insult ever offered in any form to American sportsmen,” and even asked Disney to correct slurs against hunters, according to anthropologist Matthew Cartmill’s A View to a Death in the Morning: Hunting and Nature Through History. Disney claimed sportsmen were not the targets because Salten’s story was about German hunters. In 1988, Field and Stream urged “hunters to start protesting against the “Bambi-killer jokes” they sometimes encountered.

Bambi had fans too. In a July 1942 issue of Audubon Magazine, naturalist Donald Culross Peattie “hotly denies” that Bambi “misrepresented anything.” That same year the National Audubon Society compared the cartoon’s consciousness-raising power for the environment to what Uncle Tom’s Cabin did for the abolition of slavery. New York Times reviewer Theodore Strauss claimed Disney films “teach us variously about having a fundamental respect for nature. Some of them, such as Bambi, inspired conservation awareness and laid the emotional groundwork for environmental activism.”

When it was first released, Bambi lost money, but subsequent re-releases in theatres and video rentals brought in close to $300 million by 1988 as the film became a rite of childhood. And over the years that “emotional groundwork,” took hold in the form of “The Bambi Factor,” a sentimental anthropomorphized view of wildlife, especially deer.

One of the first people bitten by the Bambi Factor was, ironically, early environmentalist Aldo Leopold. In 1943, Leopold encouraged Wisconsin to institute an antlerless deer season that would have allowed hunters to shoot does and young bucks to thin the overpopulated herd. Leopold was interested in the good of all life as part of an ecosystem, not just special animals. In his Sand County Almanac, Leopold extends ethics to include nonhuman animals, as well as the plant life that sustains them. For Leopold, “the individual is a member of a community of interdependent parts,” and those parts include all elements of the natural environment, from soil and plants to “Bambi.” A graduate of the Yale forestry school, Leopold promoted game management, evolutionary biology, and ecology, rather than sentimental anthropomorphism. To maintain a diverse ecology, Leopold supported regulated sport hunting, including shooting a limited number of Wisconsin’s does with the aim of keeping the herd size smaller. But his Wisconsin proposal was shot down—the public, according to scholar Ralph H. Lutts, was outraged at the idea of culling any of Bambi’s child-like creatures.

But there’s another environmental ideology hidden in Bambi that’s at odds with reality. Bambi’s underlying message is that “Man” and deer can’t co-exist. Only Man disrupts the pristine view of nature in the Bambi cartoons. “Why did we all run?” Bambi asks after a gun shot sounds. “Man was in the forest,” his mother replies. A later gunshot is the last we know of Bambi’s mother, hiding the violence that is heightened by her absence. Other hunters go on a chilling rampage, wounding Bambi and causing a final eco-disaster when their campfire explodes into the woods and destroys the animals’ home. The fire effects light the scene in oranges and reds, in the spirit of the “Burning of Atlanta” scene in Gone with the Wind. In the context of Disney’s film version of Bambi, humans and their vicious dogs are shadowy harbingers of death destroying an idealized paradise.

Disney focuses almost entirely on a human-free world of the forest. Unless a spectral man appears, animals of all species live without fear in a “paradise” untouched by human hands. Even owls act like vegetarians! In Disney’s natural world, interaction with humans ends only in death or suffering, so the only real choice is a complete separation between the two worlds.

As academics, Bambi’s worldview interested us: Did the “paradise” view of the forest precede the more modern idea of the ecosystem in popular culture? We were surprised to find that it didn’t. Just a few months before Bambi came out, audiences went to see the Fleischer Brothers’ animated feature Mr. Bug Goes to Town (1941). Instead of contrasting conflicts between humans and idyllic nature, Mr. Bug Goes to Town demonstrates how lowland bugs and humans can live interdependently in a human couple’s urban garden in the center of Manhattan. Despite the anthropomorphism on display, Mr. Bug’s focus on interdependence connects with more realistic views about wildlife management and interconnected communities of plants, bugs, animals, and human animals. While Mr. Bug was modeled on sophisticated Hollywood comedies of the time, Bambi reflects Disney’s focus on emotionally convincing yet traditional folktales meant to appeal to broad audiences.

Contrary to the Disney story, of course, deer are all too comfortable with “Man,” “Woman,” and “Cars,” not to mention our delicious gardens, lawns, and infant trees. By 2015, predictably, protests against the Bambi Factor started to come from drivers and organic gardeners as the deer population grew dramatically. The National Traffic Safety Administration estimates that deer cause 1.5 million roadway accidents per year with 150 human fatalities and 10,000 personal injuries, as well as $1 billion in property damage. On Internet gardening forums, gardeners grouse about deer invasions.

Bambi lovers want to protect the deer even when the deer are sick. As recently as 2012, naturalist Valerie Blaine blamed the Bambi Factor for the North Rutland Deer Alliance’s opposition to killing deer even to test for chronic wasting disease. According to Blaine, the group felt any herd reduction would spoil their “deer watching experience” in Chicago’s Northwest suburbs.

The Bambi Factor encourages sentimentalized views of wildlife that romanticize nature without accepting its messier aspects. With its vast and varied ecologies, America’s myth is that it is both a frontier to be conquered and an Eden to be preserved, but there’s more to living on this planet than choosing between paradise and a parking lot. Bambi presents us with a powerful vision that is in a sense a false choice. Instead of looking for a paradise that separates us from wild nature, we need to find a new vision that stresses how to live together, balancing habitat preservation with wildlife management. Bambi is, after all, just a movie.