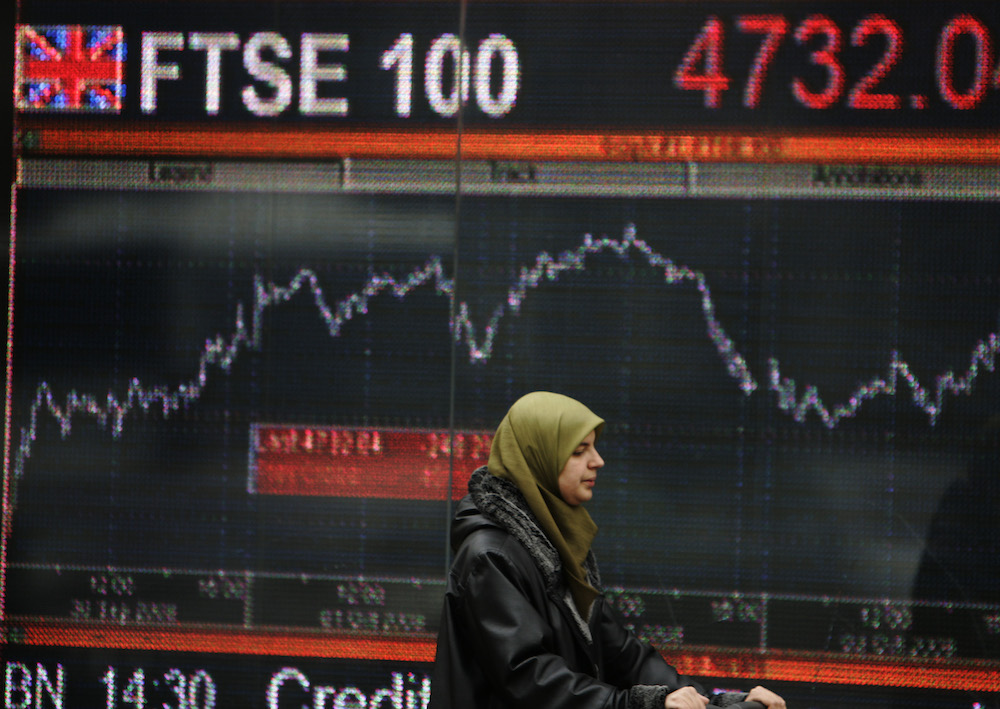 A woman walks past a financial display board in central London, Monday Oct. 6, 2008. Asian and European stock markets plunged Monday as government bank bailouts in the U.S. and Europe failed to alleviate fears that the global financial crisis would depress world economic growth. By midafternoon Europe time, Britain's benchmark stock index, the FTSE 100, lost 245.70 to 4,734.55 _ a 4.93 percent fall. The declines were led by the banking industry, with the mining and oil industries also suffering drops.(AP Photo/Lefteris Pitarakis)

It never is, of course, for a number of reasons. The “economy” in the aggregate covers many activities and sectors, some of which can be booming while others are in a rough patch. Similarly, some individuals suffer economic hardship in supposedly good times, while some people manage to thrive in down times, so one’s feelings about “the economy” don’t always correlate with the latest macro statistics and headlines.

But there is a more novel reason for the confusion surrounding how people feel about the economy: the perceived seesaw relationship between the U.S. economy and the rest of the world. For the past decade, our fortunes and those of nations beyond our shores haven’t been moving in tandem. Even more worrisome, in the political realm the two are increasingly described as being in a zero-sum, adversarial relationship.

The 2007-to-2009 financial crisis was a rare case of an economic catastrophe inflicted by the United States on the rest of the world, as opposed to earlier foreign contagions that struck the U.S. Ever since then, however, the U.S. has been outperforming most other places. We at UCLA’s Anderson Forecast continue to believe our economy remains on track for moderate growth, at a 2.5 percent rate for fourth-quarter over fourth-quarter GDP growth. The country remains on track to create 2.4 million jobs this year and 1.5 million jobs next year as the economy reaches near full employment. We estimate unemployment will stand at 4.6 percent by year’s end.

The Federal Reserve appears to be ready and willing to raise interest rates this year, partly because it is about to get the inflation it has been praying for, a sign of healthy demand for workers, goods, and services. Consumers are out and they’re spending, managing their debt loads appropriately, and the housing market is recovering from the disastrous financial crisis of the past decade.

Not long ago, the rise of China and other emerging markets, combined with the stability of Europe’s developed economies, made the rest of the world seem more like an opportunity than a threat to U.S. investors. But no longer—these days it’s mostly economic threats that seem to be washing up on our shores from distant lands.

The United States cannot indefinitely remain an island of exceptional economic tranquility in our interconnected age. Our economic fate is linked to that of the rest of the world.

Late last summer and early this year, we saw sharp declines in our stock market due to fears of what a slowdown in Chinese growth might mean for the world economy. Tensions within the European Union—over its handling of the Ukraine, Greece’s unsustainable debt load, and the Syrian refugee crisis—have also been a source of recurring worry to our financial markets. Other once-ballyhooed economies like Brazil have also been facing a slump, contributing to a decline in commodity prices and a rise in the value of the U.S. dollar, which makes our goods more expensive around the world, thereby hurting our exporters. Falling oil prices are another symptom of the funk much of the world economy is in.

The next disturbance in the force may again come from China, or from Europe, as the United Kingdom will vote in June on whether or not to stay in the European Union. Whether such a “Brexit” is a wise move or not, the transition period will likely be marked by increased market volatility.

The United States cannot indefinitely remain an island of exceptional economic tranquility in our interconnected age. Our economic fate is linked to that of the rest of the world.

Unfortunately, our politics don’t reflect this reality. There has been much talk on the campaign trail this election year about who’s “winning” and “losing” in our economic relationships, with no acknowledgment that trade can be a win-win scenario. As a result, the lurking threats posed by weakness overseas are presented by fear-mongering politicians as being more serious and sinister than they really are. Certainly there is no acknowledgment that it was America and its mortgage mania that dragged down much of the world’s economy in the Great Recession. And a time when the rest of the world yearns for steady economic leadership from the U.S., two of our leading presidential candidates want to fence off the country from the world, and blow up the global trading system we designed in the aftermath of World War II.

All these intangibles make it difficult to be in the economic forecasting business, especially when many of these intangibles are more political than economic in nature. We are used to thinking of “political risk” in the context of emerging markets (say, an election in India, South Africa, or Argentina), but now you have to say that political risk must be an asterisk attached to any U.S. economic forecast. If Donald Trump or Bernie Sanders is elected president and sticks to his campaign rhetoric and worldview once in office, we could see the second major “made in the U.S.A.” global recession of the young century. And we would discover that the true disturbance in the force lay within the whole time, as the threat to our well-being proved not to be the outside world and its woes, but how we reacted to them.