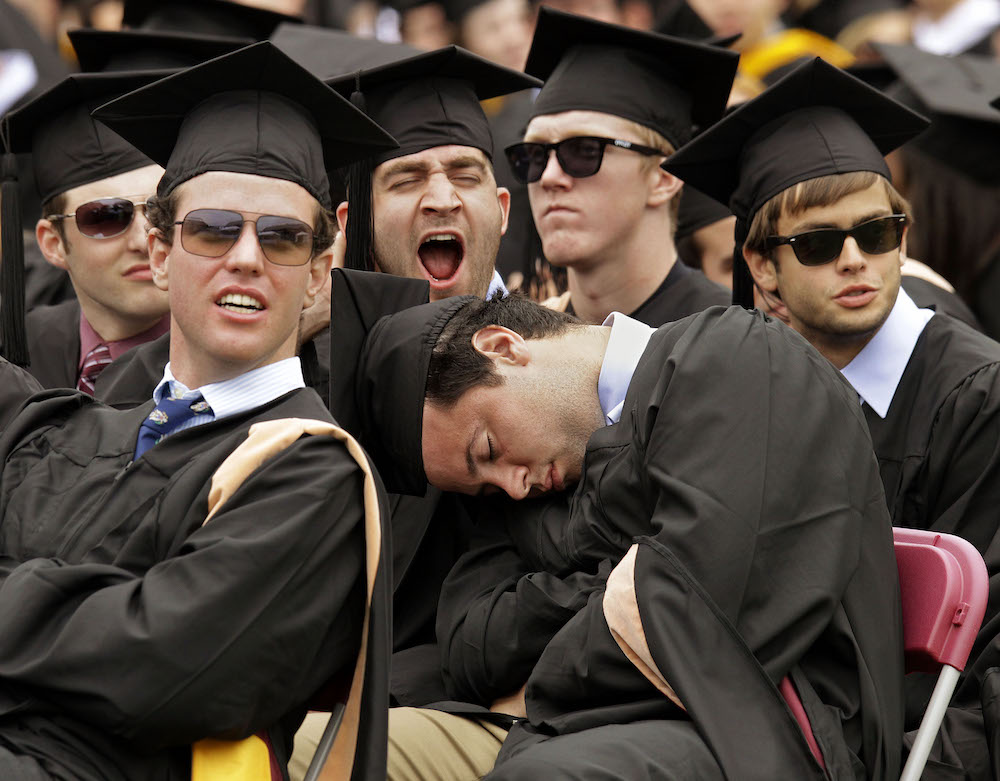 In the wake of the Great Recession, story after story appeared about how members of the millennial generation had stalled after college graduation, and were desperately searching for the jobs that they thought awaited them upon earning their diplomas. But that assumption—that a college degree should be the ticket to a solid first job and career—where did it come from? And what are the responsibilities of universities today to their graduating students? Jeffrey J. Selingo, author of There Is Life After College, visits Zócalo to explore the rapid change in the education and job markets, and what we need to do to adjust to a very different world of work. Below is an excerpt from his book.

Stanley Hall grew up in the tiny village of Ashfield, Massachusetts, near the foothills of the Berkshire Mountains in the northwest corner of the state. At age 18, he left home for Williams College, just 35 miles away, with a goal to “do something and be something in the world.” His parents were farmers. His mother, Abigail, wanted her son to become a minister, but young Stanley wasn’t sure about that plan. He had different ideas about college; he saw the four-year degree as a rite of passage—a chance to follow his passions and to explore.

Though Stanley excelled academically at Williams—he was voted smartest in his class—his parents considered his undergraduate years a bit erratic. When he graduated from college, he told his mom he didn’t think he had the “requirements for a pastor.” Even so, he moved to New York City and enrolled in a seminary.

The big city was intoxicating, and living there persuaded Stanley to abandon his religious studies short of a degree, and at the age of 25, after securing a loan, he set off for Germany to study philosophy. While there, Stanley traveled extensively, visiting the theaters, bars, and dance halls of Berlin. “What exactly are you doing over there?” his father sternly asked him. He added physiology and physics to his academic pursuits and told his parents he was thinking about getting a Ph.D. in philosophy. His mother questioned the benefit of a Ph.D. “Just what is a Doctor of Philosophy?” she asked.

His parents wanted him to come home and get a real job, and even Stanley wondered what was next. He felt he was drifting through his 20s.

“I am 25 and have done nothing for myself, scarcely tried my hand in the world to know where I can do anything,” he told his parents. But he continued his studies and explored Germany for a few more years. By then, Stanley was out of money, in debt, and without an advanced degree, so he returned home to the United States after his parents refused to support him financially. He was 27 years old.

Stanley Hall’s story is similar to that of many young Americans today. They go off to college, resist their parents’ pressures to choose a job-connected major, and then drift through the years after college graduation, often short of money or any real plan. But here’s the difference: Stanley Hall grew up in a totally different America—the one of the late 1800s.

We think this kind of lengthy takeoff is a relatively new situation for parents, but it’s not. Sure, the timetable to adulthood is definitely longer now than ever before and affects far more people, but even at the turn of the 20th century, when the economy offered fewer career choices for people like Hall and far fewer had college degrees, young people still roamed around throughout their 20s.

Hall eventually started a career—he earned an advanced degree, taught at Antioch College and Harvard University, married in his mid-30s, and became president of Clark University in Massachusetts. While at Clark, he developed a fascination with the period in life between childhood and adulthood. He founded the American Psychological Association, and in the early 1900s, he wrote an influential book that coined a new life stage that he called “adolescence.”

Hall described this transitional period from childhood to adulthood, between the ages of 14 and 24, as being full of “storm and stress.” Industrialization and automation, along with child labor laws, meant that teenagers no longer had to work in the factories or on the farms. And the emergence of the high school movement in the United States required children to acquire more education before entering the workforce.

In reality, the adolescent stage in the early 1900s was much shorter than Hall described. Employers didn’t demand that most teenagers go to college, so they were able to get a solid full-time job after graduating from high school, followed quickly by marriage and parenthood. Then around the middle of the last century, the job market began requiring that more young Americans add a college degree to the equation. The timetable to adulthood lengthened to the middle of a person’s 20s, although it was still short by today’s standards. After World War II, the GI Bill allowed returning veterans, mostly men, to go to college for free, and the fast-growing postwar workforce quickly absorbed them. They got married, bought houses in the developing suburbs, and had kids, achieving all those key milestones in their 20s. Between 1950 and 1960, the percentage of men 19 to 24 years old living with their parents fell by half.

That post–World War II era cemented in our minds an idea that remains to this day: teenagers graduate from high school, earn a college degree, secure a job, and move out of their childhood home—all by the age of 22 or so. But the 1950s turned out to be an anomaly in a century-long extension of the timetable to adulthood. World War II forced many adolescents, drafted to serve, to grow up before they were really ready to be adults; the GI Bill made it easy and cheap to go to college; and companies were quick to hire a new crop of college-educated veterans, as the United States faced little global competition from countries still rebuilding from the war.

Yet by the 1960s, the trend of a quick launch to adulthood was ending, and by the 1970s, young 20-somethings started living with their parents in larger numbers. In other words, the “boomerang generation,” named for college graduates who return home to live with their parents today, existed 40 years ago, too. It was just much smaller.

The difference between then and now is that manufacturing was still the foundation of the U.S. economy. In 1970, factory work accounted for 25 percent of jobs nationwide (compared with 10 percent today). Even in the bad economy of the 1970s, a college degree wasn’t necessary for financial success, allowing more than one pathway to solid middle-class jobs for most young people. At that time, the wage premium for a college degree—how much more the typical bachelor’s degree recipient earned compared with a high school graduate—was below 40 percent. In 1976, Newsweek ran a cover story asking “Who Needs College?” with a picture of two college graduates in their caps and gowns on a construction site with a jackhammer and a shovel, suggesting that as much as “27 percent of the nation’s work force may now be made up of people who are ‘overeducated’ for the jobs they hold.”

But the 1970s marked the last full decade when a large slice of the population didn’t need a college degree. The recession of the early 1980s effectively killed off manufacturing in the United States, and the next decade’s technology revolution essentially mandated education after high school. The economic benefits of World War II had finally ended. The increase in the wage premium started to speed up for college graduates, and after 1983, it turned into a runaway train. In 1983, the wage premium was 42 percent. Today, it surpasses 80 percent.

The high school movement of the early 1900s, which brought about the new life stage of adolescence, turned into the universal college movement as we neared the end of the 20th century. College did not become that much more valuable, but the loss of many blue-collar jobs caused the high school diploma to become much less valuable. More education was necessary in a knowledge economy, and acquiring that education required a longer timetable between adolescence and adulthood. Beginning in 1980, the next three decades would see a massive run-up in the number of students enrolled in college (both undergraduate and graduate students), leading to further delays in passing the milestones of adulthood, from marriage to buying a house, and forever changing how we view what had been a predictable transition from education to the workforce.