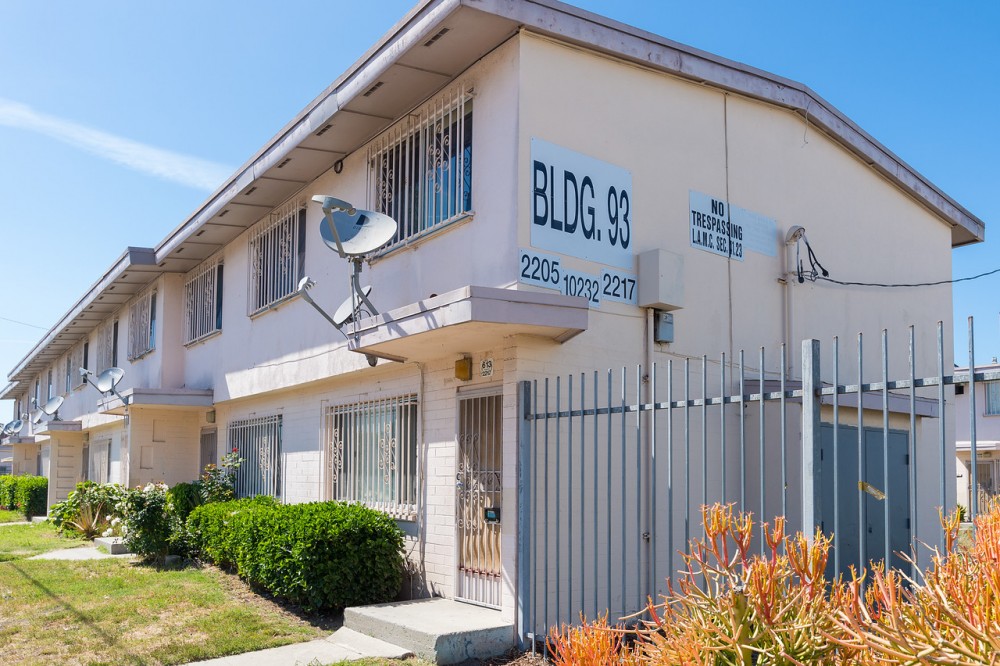 This is the year the transformation of Jordan Downs, a sprawling housing project in the heart of Watts, finally begins. So, where’s the fanfare? The story is a long one, rich with insight into how Los Angeles does and doesn’t work, both above ground and below.

Later this summer — if things go according to schedule— bulldozers and demolition crews will rumble down South Los Angeles’ Alameda Street corridor, turn into Jordan Downs, and begin demolishing some of the 700-plus cinderblock houses lined up like dominoes ready to fall for the $1 billion-plus redevelopment project. Roughly 1,410 mixed-income housing units, new businesses, green spaces, a new restaurant, and a supermarket are expected to emerge from the rubble.

The redevelopment has already been 10 years in the making, and could take another decade to complete. And when the U.S. Department of Housing and Urban Development (HUD) recently gave a thumbs-up to the Housing Authority of the City of Los Angeles (HACLA) and the master developer team of The Michaels Organization and BRIDGE Housing to begin work, the reaction by many was a mixed-bag—relief that the project will finally start tempered by troubling questions that remain unanswered.

Circumspection may be appropriate, given how similar efforts to transform other housing projects around the country have been marred by unexpected costs, delays, and disputes. The federal government’s rising ambitions—to transform older housing projects mired in poverty into sustainable and mixed-use neighborhoods where the haves and have-nots live shoulder-to-shoulder—make big housing projects even more complicated. And in reshaping public housing from previous generations, like Jordan Downs, you’re not only replacing people’s homes, you’re replacing history.

Jordan Downs was built in the 1940s as a temporary base to house workers who moved to Los Angeles during World War II. It was appropriated for public housing in the 1950s. But the difficulties in kick-starting its redevelopment can’t be explained by a lack of community interest in the project, or in improving Watts, where needs for a better quality of life are obvious.

The Health Atlas for the City of Los Angeles shows that residents in the wider Watts area live on average 12 years less than those in the affluent community of Bel-Air, and have the highest rates of asthma, mortality from stroke, and low-birth weight babies in the city. Of the roughly 2,714 Jordan Downs residents, 24 percent of adults are unemployed. The state’s unemployment average is 6.3 percent. Eighty-eight percent of people residing at Jordan Downs live below twice the federal poverty level.

In recent years, the area around Jordan Downs has been the focus of notable business, governmental, and philanthropic investments. School facilities have been improved. The Watts Gang Task Force, which brought together police and the policed, has made huge strides in improving safety in and around Jordan Downs. All kinds of grassroots initiatives, from work-training programs to Project Fatherhood, which forges closer bonds between the fathers and sons of Jordan Downs, have shown success.

Nor have elected officials dragged their feet. Mayors, council members, and congressional figures have taken turns championing Jordan Downs over the years, with many seeking to expedite the redevelopment. And residents have largely echoed their “what’s taking so long” sentiments. The Housing Authority’s agreement with the developer requires that 30 percent of people hired on the project are from Jordan Downs. Some residents have already begun training for work on the demolition and subsequent construction.

Of the roughly 2,714 Jordan Downs residents, 24 percent of adults are unemployed. The state’s unemployment average is 6.3 percent.

So, why has the project taken so long to launch, and why have many people expressed reservations about the redevelopment as a whole?

Bureaucratic blunders and the Housing Authority’s inability to secure valuable grant funding provide some of the answers. Twice Jordan Downs has been turned down for a HUD Choice Neighborhood Initiative (CNI) grant, which would funnel a possible $30 million towards the redevelopment. Last year, the application was submitted with errors and missing documents. This year’s CNI application has just been drafted.

But a bigger issue has involved the discovery of a toxic footprint in and around Jordan Downs.

News of contamination at Jordan Downs first drew my interest there as a journalist back in 2014. I’ve followed cleanup efforts since, watching as the redevelopment lifted a veil on the sheer scale of the environmental problems. Toxic hotspots include an Exxon pipeline breach at the northeast tip of Jordan Downs, and multiple lead and arsenic cleanups in recent years at Jordan High, on the southeast corner of the housing project.

Though steps have been taken to mitigate known contaminated sites, questions hang over the past and the future: whether residents were adequately protected from toxic exposure, whether enough is being done to protect residents as the redevelopment rumbles forward, and whether environmental racism has swayed key decisions.

Recent contamination concerns have focused on the “factory” site—a now empty plot of land nestled in the very heart of Jordan Downs, immediately abutting homes. A steel mill operated there up until 2000; the site has also been used for trucking operations and waste storage. These activities leached a toxic inventory including engine oil and engine waste, diesel and gasoline, paint thinners, solvents, and chemicals found in electric transformers into the soil and groundwater. Lead was detected there at levels as high as 22,000 parts per million (ppm). The safe threshold for residential soil lead levels in California is 80 ppm.

The water crisis in Flint, Michigan, has focused attention to the seriousness of lead exposure, especially for young children. The Center for Disease Control and Prevention finds no safe blood lead level in children, nor can the effects of exposure to lead, a neurotoxin, be reversed. More than half of those who live in Jordan Downs are children under the age of 18. Recent studies have suggested that lead contamination extends well beyond the factory perimeter, and residents fear that they may have been exposed to lead-entrenched soils from their gardens, community areas, and playgrounds for years.

A 2009 Housing Authority interoffice memo stated that the residential portions of Jordan Downs could suffer from environmental contamination and “might require remediation.” But it wasn’t until a full five years later that California’s Department of Toxic Substance Control conducted soil tests around the perimeter wall of the factory site, to gauge whether lead had migrated into residential areas.

Though the tests returned elevated lead levels in roughly half of the samples, the DTSC made a No Further Action (NFA) determination not to test further out into the community—a decision questioned by local residents and their advocates, who conducted their own tests earlier this year. A coalition of environmental justice groups hired an X-ray fluorescence analyzer to take more than 100 soil samples in and around the homes. Fifty-one of the samples screened above the 80 ppm  threshold for lead. Thirty-three of those 51 samples had lead levels ranging between 105.25 ppm and 346.04  ppm.

The people of Los Angeles simply cannot afford to lose what affordable housing remains, even for a short time.

Uncertainty about contamination has been fueled by the fact that the DTSC scientist who determined that no further testing was needed was recently embroiled in a racism scandal, where he and another senior department scientist shared emails containing racial epithets such as “injun badge,” “crackho hooker,” and “Chop-chop Hop Sing.” The emails were exposed in response to a public records request I made as part of an ongoing investigation into institutionalized racism within the DTSC.

Confronted with the emails, the DTSC promised to review their decision to take no further action. When that review might be completed is unknown.

Lead isn’t the only concern at Jordan Downs. A plume of trichloroethylene (TCE), an industrial solvent that can be especially dangerous for pregnant women and developing fetuses, has been discovered in the groundwater beneath residential portions of Jordan Downs. The DTSC conducted soil, vapor intrusion, and groundwater tests last year, the results of which, they say, indicate that TCE vapor intrusion isn’t a threat to the existing housing. However, the full reach of the plume has never been fully delineated, nor has the source of the contamination been identified.

To get a clearer picture of how those who live at Jordan Downs are impacted by the myriad sources of contamination, Physicians for Social Responsibility—a nonprofit health and environmental advocacy group—is conducting an assessment of the community’s health in July and holding a health fair at Jordan High School, offering residents medical services and lead tests.

As the redevelopment nears its launch date, contamination fears are joined by different concerns: that today’s Jordan Downs tenants might not have a home at Jordan Downs when construction is over. Such skepticism is grounded in a long history of displacement and evictions in South L.A., and in redeveloped housing projects around the country.

Jordan Downs is supposed to be different. As currently envisioned, the redevelopment is designed to progress in piece-meal fashion, with new housing being built first on the empty factory lot, creating an over-flow for the initial batch of residents to move into while their homes are demolished, and so on. The Housing Authority recently distributed “Right to Retain Tenancy” certificates.

But the nonprofit L.A. Community Action Network alleges that low-income residents are already being removed to pave the way for wealthier ones, and is documenting evictions it says are tied to the redevelopment. The Housing Authority says otherwise. Figures the Housing Authority provided show evictions at Jordan Downs have fluctuated year-by-year, between 2011 and 2015, during which time 100 separate families have been evicted. Though the annual eviction rate per unit was slightly lower than that at two nearby housing developments.

Displacement fears are inevitable in a county with an estimated half-a-million fewer rental units than are needed. The people of Los Angeles simply cannot afford to lose what affordable housing remains, even for a short time. Which is why delays are better than getting Jordan Downs wrong. Here come the bulldozers.