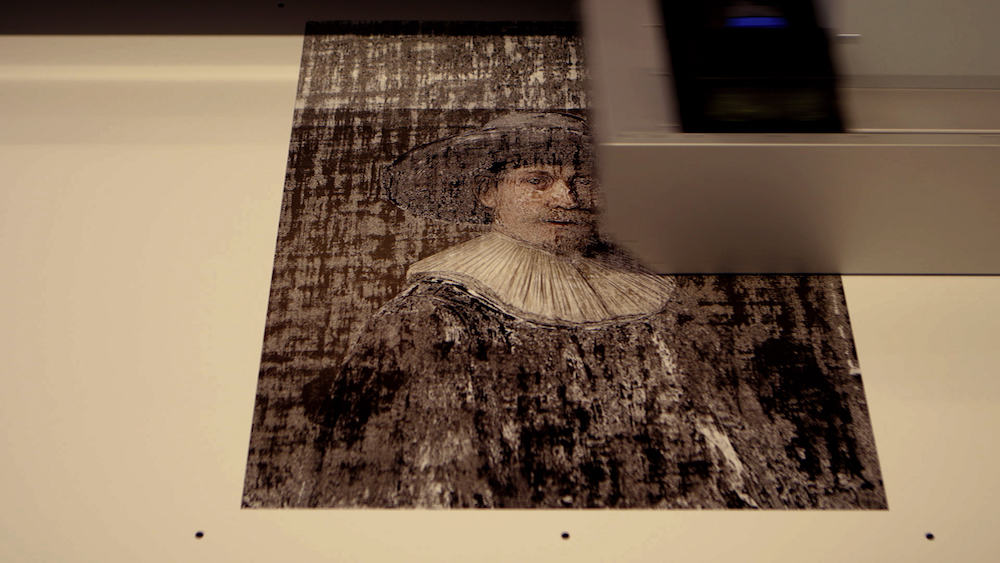 You are in the Chauvet cave, 35,000 years old. As you enter, the walkway you traverse winds around spot-lit, saber-toothed stalactites and stalagmites. The rough-skin texture of the stone walls is slick in the perpetually damp dark. Your flashlight picks out first one, then more, prehistoric paintings on the wall. A deer, bison, a rhinoceros, all painted in charcoal black by Paleolithic hands. Or were they?

Something is missing, even a blind person could tell that. The scent is all wrong. Instead of damp mustiness, it smells of, well, tourists. You are not in the real Chauvet cave, which is closed to the public, as the atmospheric conditions which preserve its fragile paintings must be maintained. Instead, you are in the Caverne du Pont d’Arc, a recently opened replica of the Chauvet cave. It’s accurate down to the last undulation of the stone wall—to the last stalactite—but patently false.

Now, you travel blindfolded to some anonymous, freshly built art museum. Down goes the blindfold, and you stand before van Gogh’s Almond Blossom. Surely you must be in the Van Gogh Museum in Amsterdam. Why, the painting is obviously a van Gogh, with the artist’s globular, three-dimensional application of vast, snotty quantities of oil, so much that the paint casts a shadow.

But no, you’re looking at a work from the Relievo Collection, an odd package offered by the Van Gogh Museum to collectors and institutions who would like nine of van Gogh’s greatest hits on their walls, at a cool quarter million dollars for the bunch, proving that even for the wealthiest people art can be difficult to procure and prohibitively expensive. These pricey reproductions are pinpoint accurate, made with sophisticated three-dimensional scanning and printing, so that every brushstroke is just as van Gogh made it. Only van Gogh did not make it. A printer did.

Welcome to what we might call “art in the age of digital reproduction.” This idea is riffing on Walter Benjamin’s famous essay “The Work of Art in the Age of Mechanical Reproduction,” in which he argued that authentic artworks have a certain, indefinable “aura” about them that makes them great. Reproductions—whether produced mechanically, as they were in 1936 when Benjamin was writing, or digitally as they are today—are missing this. We might even risk calling this the missing “soul” of the work—a key component that art lovers find lacking when they see a digital copy of a work.

I specify digital copy, because these reproductions are very different from forgeries. In my recent book, I discussed whether a forgery of a great work of art could itself be considered great. Most forgeries that make any headway in fooling experts are unique works themselves, made by hand by an artist in fraudulent imitation of the work of some other, more famous artist. These forgeries are “originals,” in that they are still created by a passionate craftsman, and therefore possess their own kind of aura. They are just made in a derivative style and then later passed off as something they are not.

Such unique, handmade forgeries, created with skill and ardor—like Han van Meegeren’s Vermeers, Eric Hebborn’s rendition of Van Dyck’s Christ Crowned with Thorns or even Michelangelo’s Sleeping Eros, which he passed off as an ancient statue before he had made a name for himself—can indeed be great works of art unto themselves, in a similar vein as the work done by an assistant in a master’s studio. Apprenticeship is part of a long tradition in Western and Asian art, distinct from forgery in that there is no proactive attempt at fraud. With few exceptions, at least since the days of ancient Athens, master artists all worked in the studio system. The master was the head of a studio consisting of apprentices, who functioned like live-in interns, and paid assistants. While these apprentices and assistants handled much of the actual painting—the under-layers, still-lifes, architectural features, backgrounds, and clothing—the master designed the work and supervised its creation. The mark of a good assistant was his ability to paint in a way that was indistinguishable from the master’s style, so that the finished painting, sculpture, or decorative object would appear to have been created by a single artist. All the works that emerged from the studio were under the authorship of the master, who was licensed by the local painter’s guild to run the studio and accept commissions.

This method was almost always the way artists worked, with the few who did not run studios—such as Caravaggio—acting as the exceptions rather than the rule. One might pay a fortune to get a work entirely painted by Rembrandt, or a more modest sum for a work designed by Rembrandt but largely painted by his staff. This did not mean that the less expensive option was poorly made, and technically, it could even still be called a “Rembrandt.” This process was an entirely legal, artist-sanctioned form of forgery.

When we speak of scanned and printed works of art, copies made by computers and a fabrication mechanism rather than a human hand, it is a different story altogether. It might look good, but what about Benjamin’s “aura?” 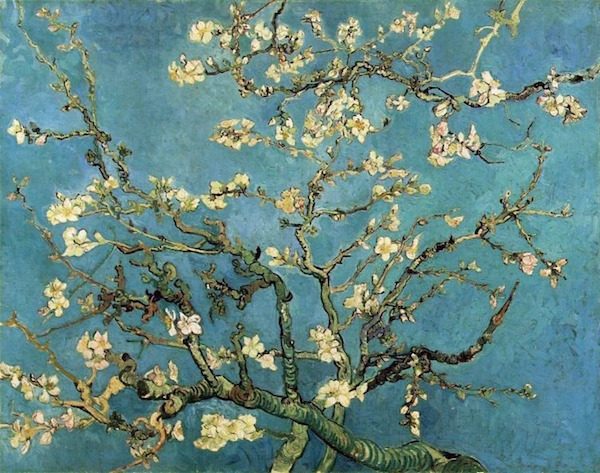 Digital reproductions do not have to be copies of existing works. Recently, The Next Rembrandt project saw scientists develop a brand-new painting, complete with an original subject and composition, digitally designed and printed to look like a lost work of Rembrandt’s. Aesthetically, when viewed on a computer or television screen, it convinces. Since the most successful art forgers do not copy existing works, but instead create new pieces that they attempt to pass off as an established master’s lost work, the compelling nature of this digital experiment is disturbing. Giorgione created only a handful of paintings in his career. Wouldn’t it be wonderful if more works “by” Giorgione could be created? Or would it?

Perhaps creating new works of art designed by committee, and made by computer, feels morally questionable. But what of resurrecting works that once were, but are now destroyed? My next book is an illustrated history of lost art—the technology exists now to recreate lost masterpieces, from the Athena Parthenos to the bombed-out ruins of Palmyra. And what of finishing projects that the fates did not permit to come to fruition? Leonardo’s colossal Sforza horse would have been the largest cast-bronze sculpture in the world, but he only made a full-size terracotta version of it before he was driven from Milan by the invading French (who used the horse for target practice). Now we could build the bronze version according to Leonardo’s exact specifications. But should we?

It is when you see such a work in person that the veil begins to peel back. One can just feel the inauthenticity of the Caverne du Pont d’Arc cave paintings, of the Relievo van Goghs, of the “new” Rembrandt. These digital copies lack Benjamin’s aura. That aura is what divides the real world from the Matrix. In the film, The Matrix, most of the world chooses to live in blissful ignorance in a computer-generated simulation of a pre-apocalyptic version of the world. But a handful of heroes want to “unplug” the Matrix and reveal to humanity that it is living in a simulacrum, a lie, so they can rebel against it. One scene from the film references Lewis Carroll: The hero, Neo, is offered either a blue or a red pill. Taking the blue pill would allow Neo to forget that the Matrix is a computer construct, to rejoin the blissfully ignorant. Taking the red pill would keep him aware of painful reality, but this awareness would allow him to do something about it. Connoisseurship, an innate feeling for art and authenticity, is the red pill that allows experts and passionate amateurs to feel the difference between art that emerged from a three-dimensional human hand, versus that spit out by a three-dimensional printer.

Subtract the post-apocalyptic warzone, and the parallel with The Matrix is apt. Experts and art lovers can tell the simulacrum from the authentic work. The rest of the world could, likewise, if they tried, but they may not care to. Perhaps they are just as happy with a Relievo Collection van Gogh on their walls? A danger arises when amateurs and bogus experts aren’t able to tell the difference between what’s real and what’s reproduced. Worse, they might see the digital copy and decide that it is not worth the effort to see the original. They might not think that the work is better, but it is unarguably more convenient to access. All this talk of simulacra and The Matrix may bring to mind Plato’s Allegory of the Cave, in which he describes what humans perceive as akin to shadows dancing on the back wall of a cave in which humanity is chained, facing the back wall and unable to turn around. Light from outside shines on life passing by the mouth of the cave, but humans cannot see it directly, only by way of the shadows thrown by the light onto the back wall. Those accepting of the shadows as sufficient live in blissful ignorance inside the Matrix. Those who are convinced that a simulacrum is not enough struggle against those chains.

Back in the Caverne du Pont d’Arc, the tourists all look perfectly content. And perhaps they should be, for in this situation, it is literally not possible to visit the Chauvet cave itself, and this is the only option—a simulacrum, but a very good one, made with passion, though produced by digital technology and mechanics, by a human mind but not a human hand. This is less objectionable than, say, the tourist who visits The Venetian hotel and casino in Las Vegas—which includes a vast, elaborate reproduction of Venetian streets and canals—and then decides that he has already seen Venice, and doesn’t need to go to the real city. If this happens too often, with simulacra so much more convenient to experience, the real version can slump into disrepair and eventually become abandoned. Then we may be left with the body, but risk the loss of the most important thing to those who truly know and love art and history: the soul.