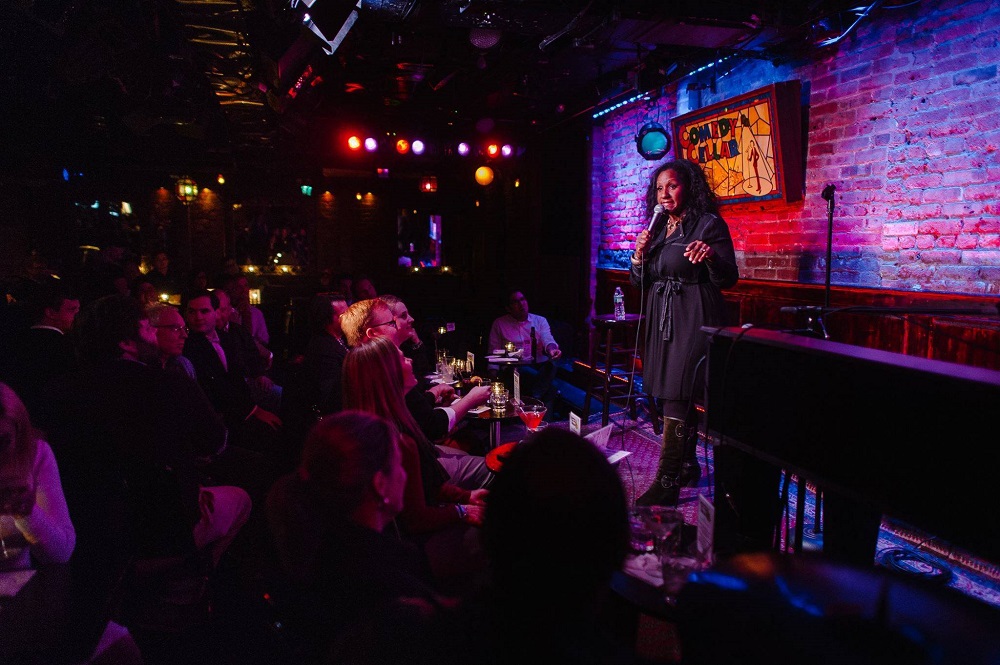 I have loved the art of stand-up comedy for as long as I can remember. I loved everything about it. The boldness. The nerve. The clever play on words. The astute observations it took to find a kernel of humor in even the most mundane of situations. I still believe that comedians are some of the smartest people on this planet.

Who else could take something everyday and simple and, with a seemingly effortless aside, raise it to a level of complexity that creates mind-shifts in the human psyche? Who other than comedians can take something intimidatingly complex—think masters like George Carlin on the government or even the idea of God—and, in the span of a witty retort, break it down to a simple truth?

Comedians cover it all from laughing off involuntary bodily functions to exposing untouchable powers-that-be. With all that breadth and range and possibility, I can’t help but be in awe of them.

I continue to be surprised that comedian is now my own moniker. To start, I was never the class clown. If anything I was the goody two-shoes who got good grades and played by the rules. But in my family, it was tradition to seek out the humor in situations—the silly, the painful, and sometimes the gruesome. I learned quickly that doing so can make life’s pain sting less. It’s that side of comedy that I bring to the stage. And it’s that side of comedy that has made my 20 years as a performer an indescribable study of the human psyche—both of others and my own—that even Jung and Freud would envy.

It also helps that there are no rules in comedy. Well, save for one: It has to be funny. That was always the attraction and the challenge.

Until a few years ago, I assumed that everyone stuck to this simple standard. Then the “war on comedy” erupted. We’ve seen the battlefield pop up everywhere in the last few years: students protesting visiting comics over perceived sexist or racist sets, the social media storms after a seemingly off-color joke, the explosion of think pieces over the insidious intent behind a thoughtless retort. Although outrage vigilantes waging these battles claim to be stomping out bigotry, instead they have become hypersensitive to the point where they have gone after just about anything. Hard. And the mob rarely suggests starting conversations, instead leaping to cries to cancel sitcoms, boycott comedy shows, or blacklist comedians as unequivocal misogynists or racists.

… in the case of Ellen and in so many other examples … the outrage that follows these jokes seems to be more a reflexive hunt for things to take offense at rather than thoughtful critique.

Take the recent example of what happened when talk show host Ellen DeGeneres tweeted a photoshopped image of her piggybacking on sprinting Olympian Usain Bolt. The joke was a caption that read “This is how I’m running errands from now on. #Rio2016.” Cause he’s the fastest man in the world! Get it?! Well, thousands did not get it, saying the image of a white woman on the back of the black Jamaican runner echoed of the old tradition of slaves carrying their masters and called for Ellen’s head on a platter. As a black woman, I’m attuned to instances of everyday racism that can seep into the lives of African Americans. This wasn’t one of them. This was a funny image of an adult getting a piggyback ride and making fun of L.A. traffic (it really is hell!). The cacophony got to be so much that DeGeneres actually had to reassure the public that she was not a racist.

I would never be so bold as to tell someone how to process humor—it’s as subjective as taste in fashion or food. Based on a complex web of experiences and worldviews, some people are left in stitches, while others are left with a shrug. But in the case of Ellen and in so many other examples (including those captured in the documentary on this troubling trend, Can We Take a Joke?, in which I was a featured comedian), the outrage that follows these jokes seems to be more a reflexive hunt for things to take offense at rather than thoughtful critique.

The real problem, however, isn’t the wasted energy of the political correctness patrollers or the hurt careers of comics. The danger of this outrage phenomenon is that, in the process of policing every sensitive subject, we lose comedy itself—one of the only tools we have to grapple with our testiest issues. Humor is an entryway unlike any other for talking out those things we’re too afraid, too uncomfortable, or too pained to broach head on. If we can’t joke about issues like ethnicity, sexuality, class, politics, pain, and death, we may never get through them or find ways to heal.

I see this power of comedy first-hand when people approach me after my sets (especially those I do in my Stereotyped 101 program, a set of workshops I created for classrooms and workplaces that uses humor to address diversity and inclusion issues). Whether it was a joke about race, size, age, or sexuality, people who say something almost always tell me they are grateful that someone is addressing, rather than shying away from, one of these taboo issues. For example, I have a joke, inspired from real life, where I riff on the less-than-straitlaced members of my black family:

“My cousin just got married, had a baby, and names the daughter … Daijanera.
Someone asked me what that means? What does it mean?! She made it up!
No, I’ll tell you what it means. It’s apparently African-American for ‘I never want my daughter to have a job in corporate America.'”

When my audience laughs at that—and they do, even if it’s uncomfortable laugher—I follow it up with:

“I’m so glad y’all laughed at that because that joke did NOT go over so well in Atlanta. I know this because after the show, Ryshaneequa came up to me and she had some choice words.”

Then I’ll proceed to go into a litany of other names given to Caucasian girls that are equally absurd—showing that this name game crosses all color lines and ethnic barriers. It never fails that at least two people come up to me after a show and either share their name or family member’s name and we all have a laugh. The joke works because underneath the surface, it’s way more of a knock on the racism in corporate America—and on the stereotypes we’re all willing to pile on certain names—than it is on my cousin’s first-born. I’ve heard from audience members about how the joke opened up conversations that make them rethink their prejudices or consoled them that they’re not the only ones unfairly judged for their unusual name. It’s reactions like this that remind me why I fell in love with comedy, and why I’ve stuck with it all these years.

I’ve been in the industry for nearly two decades now, and from what I’ve seen, the majority of us comedians are good people (albeit some a little damaged). Our aim is always to use humor to unite the audience—not divide or exclude them. To do that, we come armed with our stories, our words, our bodies, and our fallibility. Sure, we make some missteps. But comedy is an intricate art that often relies on getting a laugh at the things we’re most afraid to talk about. If we lose our senses of humor about the difficult issues, I’m afraid we may lose our nerve to bring them up at all.