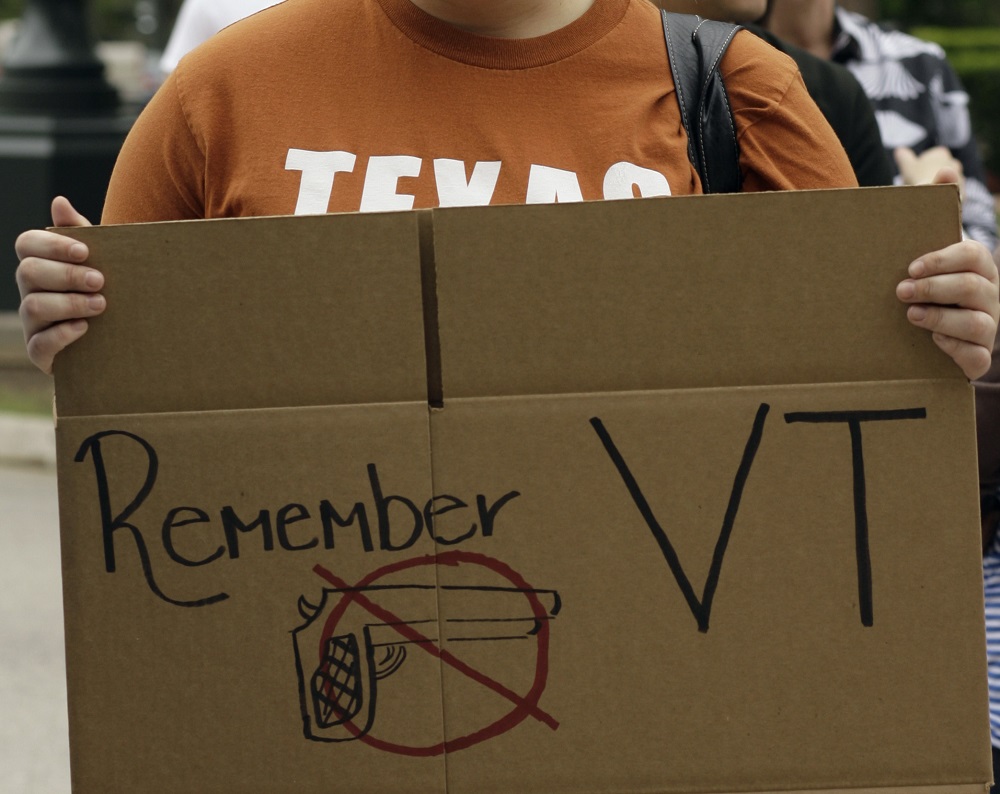 Now that Texas’ “campus carry” law, that bit of cowboy legislation that empowers everyone over 21 with a concealed handgun license to carry a pistol into a public university classroom is in effect, those of us who teach are watching with dark fascination. What could possibly go wrong?

I don’t become easily flustered at the prospect of violence. I grew up in Black Los Angeles in the ‘body count’ ’70s, and taught in an inner city high school for five years during the rock cocaine epidemic. I became desensitized to prison-like security and sworn officers of the law putting young people in headlocks—and the sound of gunshots in the distance. Then, after leaving for graduate school and receiving my MFA in creative writing and selling my first novel, my life as a publishing novelist afforded me the opportunity to teach at many of the better universities in Southern California.

Still, some of the entitled—and barely conscious—students I have since encountered at these prestigious schools make me nostalgic for the daily grind of the high school classroom. At the college level I usually grade generously because a fiction workshop is subjective by nature. But with one student I couldn’t bring myself to give him an “A”. He wrote smug and mean pieces that left me depressed. I gave him a B+ instead of the A- he coveted. As soon as I submitted grades I received an angry email from him.

I was alarmed, but less so when I bothered to read a few sentences down to see that he hadn’t threatened to kill me, rather he’d get his parents to sue me. I laughed it off, but then a female student who was in the same fiction workshop emailed me this:

This may seem strange or out of the blue to you, but it has worried me the past few days and I thought I would email you about it. I’m sure you have heard about the tragedy at Virginia Tech that happened yesterday. Today the news released information about the gunman, who was also student. Classmates and teachers of the gunman have talked about how he was a creative writing student who wrote disturbing plays and stories in class about murdering people. His teacher reported him to the school administration, and nothing was done. I don’t know if you remember this, but one of the students in our class wrote a story that was disturbing to say the least. It talked about stalking female students and included graphic details of several murders. I don’t know his name… I don’t really know what I’m asking you to do, but I wanted to possibly trigger your memory about this. The mere thought of something happening on our campus terrifies me, and if this kid is deranged, or “troubled” as the papers have described the VT gunman, the administration should know about it immediately. I may sound paranoid, but I think when something like this happens there’s no reason to take any chances.

She was describing the student trying to intimidate me into changing his grade. I reported him to the administration, but he kept writing vaguely threatening emails to me even when he was told to cease contacting me.

A few years later another student, a guy who seemed pleasant and a little goofy, made a comment before class in the hallway in front of his fellow classmates that his next story would be about killing his classmates. Suddenly half my students were skipping class (before attendance had been great). Again, a female student told me that students were frightened of the goofy guy. The student boycott got the attention of the university higher-ups and he was interviewed after I talked to him. He had no idea of the panic he caused, or that armed undercover campus security officers were in the hallway ready to handle the situation if I called them in.

I teach at UC Santa Barbara now, the school I graduated from. It’s a university that has experienced its share of tragedy. I was on campus on May 23, 2014, the night when Elliot Rodger killed six people in Isla Vista, the college town abutting the university. I had just finished class in the late afternoon and noticed an email to the campus community:

The offices of Student Mental Health Coordination Services, Student Health, Counseling & Psychological Services, and the UC Police Department invite you to a “Responding to Distressed Students” training on May 28, 9:00 – 11:00 am. The goals of the training are to provide attendees with a context for student mental health, to introduce and review the distressed student protocol and appropriate campus resources for students, offer suggestions on how to refer students, and review potential distressed student scenarios. This interactive training is open to staff and faculty and all are invited and encouraged to attend.

Unfortunately Elliot Rodger wasn’t a student at UCSB eligible to receive counseling services and coffee and bagels. David Attias, son of film director Daniel Attias was, but he didn’t seek counseling back in 2001 when he ran over five people in Isla Vista. Both young men had families who knew their sons were troubled and desperately tried to intervene to prevent tragedy, but the efforts didn’t work.

About a year ago I brought Elise, my 15-year-old daughter, to sit in on the fiction writing course I teach at UCSB, so that later we could celebrate the birthday of my older daughter Giselle, who was then a Global Studies major at UCSB. Our plans were scuttled when the university was put on alert and locked down. No one could enter or leave the university while the campus police searched for a shooter. Seemingly it was a drug deal that became a dorm robbery that resulted in a massive response including multiple helicopters circling campus. It felt strangely like being a kid in South L.A. when the police were chasing somebody down.

As a kid I feared being killed because there was epidemic of shootings around me. Pootbutts (nerds) like me got shot along with gangbangers: Friends shot friends as well as family members and bystanders. I learned then that having a gun isn’t a magic talisman that keeps bullets from finding you. The tortured logic is that maybe you can avoid being shot because you’ll shoot first, or get a shot off if the shooter misses—and then that baby in the stroller gets a bullet in the brain. I had guns pointed at me four times; once out of anger, twice out of mistaken identity and, the last time, as part of a family dispute. In all of these instances guns were pointed at me suddenly and without opportunity for escape. The last time it happened all I could think to do was stare down the barrel of a shotgun and smile stupidly. The lesson I learned in L.A. was invaluable: When your neighborhood becomes awash in guns, no one is safe and you need to find somewhere sane to live, or spend your life inside of the house, hiding in the bathtub. What I dealt with as kid, fear for my personal safety, I wouldn’t now tolerate for myself, or my family. Sadly professors at these public universities in Texas—with possible gun-wielding students—have to carefully consider what it means to teach in a potentially militarized classroom.

The Texas legislature must believe more guns equal more safety, and that gun ownership is such an unmitigated good that it should be a largely unregulated right shoehorned into all aspects of daily life. The consequences remain to be seen. I can imagine being a professor at the University of Texas and leading a critique of a lousy story of a potentially armed student. Or the joy of explaining his failing grade during office hours behind my bullet proof partition, my own pistol close at hand deep in the heart of Texas.