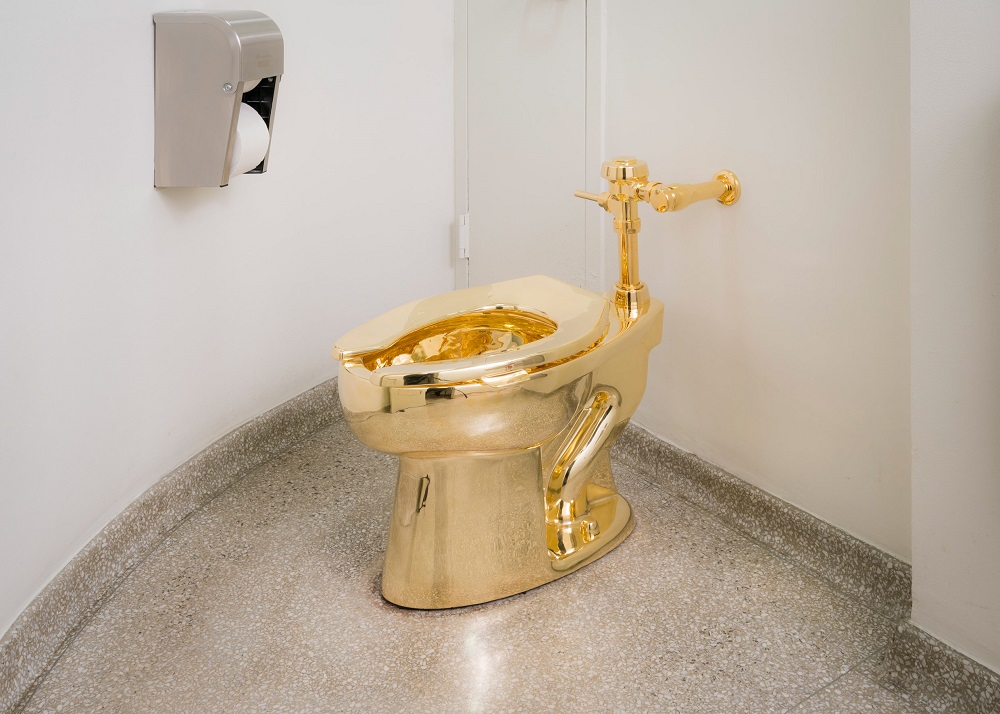 The Guggenheim guard, a young woman with shoulder-length brown hair and a pretty, round face, said that the wait to see Maurizio Cattelan’s America would be one hour. My husband Andrew and I had rushed into the New York museum as soon as it opened and run up to the fifth floor, where Cattelan’s solid gold toilet glimmered in a water closet. Cattelan’s gabinetto had been installed on Sept. 16, 2016, only three days before, and the crush to see it proved impressive: As I shifted my service Chihuahua, Babs, onto my hip, the elevator coughed out heaps of rain-sprinkled tourists.

In front of me stood a Gallic man wearing arty camouflage cargo shorts, who silently widened his huge blue eyes when I asked why he hankered to look at a gold toilet. At my aft stood a Japanese woman, who agreeably modeled for me her comely polka dot Commes des Garçons skort. She shrugged when I inquired why she planned to sit on a gold crapper, then gently petted the dog.

No one prodded me on why I, an American, wanted to spend my morning waiting to gawk at a shitter made of gold, which Cattelan had conjured in an effort to represent my country. As the line stretched and looped through Wright’s rotunda, an air of baffled hilarity began to rise from the queuers. “This is grotesque,” someone said. “I can’t believe we’re doing this,” someone else jeered.

When I first assumed my place in line I thought I had queued to Schadenfreudistically witness the boneheadedness of others—specifically, the idiocy of Cattelan and the P.T. Barnum-like nadir of the Guggenheim curators. Cattelan is an art-world mercenary who traffics in dumb art. Born in Padua, Italy in 1960 to a truck driver father and a domestic worker mother, Cattelan has made a lucrative career out of aesthetic inanity. For 1996’s Another Fucking Readymade, he stole the works slated to appear in a Paul de Revs exhibit, which he then passed off as his own products. The next year, he exhibited 200 taxidermied pigeons, complete with ersatz pigeon excrement, at the Venice Biennale. 2001’s L.O.V.E. consists of a huge marble hand with all of the fingers chopped off except for an extended middle digit, which flips off the Milan Stock Exchange. In 2011, Cattelan falsely announced that he planned to retire from art after one last big show at the Guggenheim, where he hung up all of his sculptures so high in its rotunda that you really couldn’t appreciate their details.

America just appeared to riff off these themes of disgust and self-absorption.

But the closer I got to the toilet, the weirder I started to feel.

I realized that I was waiting to try to take a poo on my country, which was also a way, I guessed, of taking a poo on myself. I’m not saying that this country hasn’t earned its fair share of angry flatulence, especially in this particular political moment. I’m just saying that I don’t usually go out of my way to get pooed on, or to poo on myself, or to poo on anybody, as a matter of fact.

I don’t actively seek out self- or other-poopage because that seems like it would be really humiliating. And yet, I was there to humiliate myself.

There is a strong and worthwhile tradition of humiliation in contemporary American art. In the mid-1980s, conceptual and performance artist Adrian Piper devised her Calling Card # 1, which read, in part: “Dear Friend, I am black. I am sure you did not realize this when you made/laughed at/agreed with that racist remark … I regret any discomfort my presence is causing you, just as I am sure you regret the discomfort your racism is causing me.” Piper is a light-skinned African-American woman, and she would hand these cards out whenever she found herself confronted with hate speech delivered by associates who thought that she was white like them.

I realized that I was waiting to try to take a poo on my country, which was also a way, I guessed, of taking a poo on myself.

The photographer Diane Arbus, who took powerful, mostly black-and-white photographs of trans women, older cisgender women, differently abled people, and terrifying-looking children, also pinned her audience with accusations. Arbus possessed such a great gift for making certain viewers squirm that poet and cultural critic Wayne Koestenbaum wrote an essay titled “Diane Arbus and Humiliation.” Arbus humiliated certain constituencies by showing them that their privilege caused them to over- and under-react to candid images of vulnerable people.

But Kara Walker is perhaps the most distressing and confrontational of contemporary pro-mortification artists. Walker burst onto the art scene in 1994 with Gone, An Historical Romance of a Civil War as It Occurred Between the Dusky Thighs of One Young Negress and Her Heart, a panorama of beautiful black-paper silhouettes depicting surreal, usually violent, and sexual interactions between black Americans and slave owners in the antebellum South. In 2014, Walker expanded her methods with A Subtlety, a commentary on capital, race, and the sugar industry in the form of a huge sculpture of a sphinx made out of radiant white sugar: This being had a “Mammy” head, naked breasts, a 10-foot vagina, and a lioness’s hindquarters, and Walker installed her in Brooklyn’s decommissioned Domino Sugar Factory. A Subtlety grew notorious, and many Anglo people flocked to see it, often taking grinning selfies of themselves next to Walker’s chimera. Walker would walk around the factory, taking her own photographs of the selfie-takers and documenting their enjoyment.

In these works, Walker lures white viewers with the promise of beauty, and then leaves them to writhe in confusion, disgust, pleasure, and self-loathing as possible descendants of an unjustifiable society and contemporary inhabitants of a deeply unequal one. Like Piper and Arbus, Walker’s disgracing of her audience raises consciousness of base social practices like racist voyeurism and objectification, and provides people with chances to change the way they behave—that is, when they’re not excitedly taking self-portraits of themselves so engaged: “I would be happy if visitors would stand in front of my work and feel a bit ashamed—ashamed because they have … simply believed in the project of modernism,” Walker once told an interviewer.

No such opportunity offered itself with Cattelan’s America, however. It is simply not that thoughtful. It’s just a stunt. At least that’s how it seemed to me as I stood in line with my dog and my husband and inched toward the throne.

As I finally stepped to the head of the line, I was greeted by a tall, comely white male guard, outfitted in the Guggenheim’s stark black uniform and brandishing a luxuriant beard.

“Wait a second,” he said, popping into the bathroom, presumably to clean it with wipes or to make sure it wasn’t smeared with feces.

“This is lame,” I said to my husband.

I hiked up my dog onto my chest and started to worry that the toilet would smell. I wondered what the hell I was doing there. The problems I could see with my patronage did not just flow from the prospect of evacuating on my country and thus myself. I also considered the fact that as a Chicana, maybe I shouldn’t wait in line to see a solid gold toilet made by an Italian and housed in a billion-dollar Wunderkabinett—the history of Mexicans, gold, and elite collecting is incredibly depressing in the first place, and the toilet part just adds yet another slur to that history.

But as I looked down the long row of expectant faces, I also felt giddy and happy to be participating in this art world spectacle. The psychoanalyst and literary critic Julia Kristeva once came up with the word jouissance to describe the unlikely ecstasy of oppressed and humiliated people, but as I entered the white-walled and pristine water closet, I could tell that word didn’t quite fit, and not just because I stood there of my own free will.

I looked down at the dumb gold toilet. It was gorgeous and gleaming and unused and maybe made of quondam Aztec gold. Nobody had dared employ it for any purposes other than Instagram. I felt very clearly that I was being insulted, and that I had insulted myself, even as I chuckled and took pictures of myself, the dog, and the potty. Jouissance certainly didn’t cover my reaction—there was no ecstasy to be found in this latrine. Also, my embarrassment was so baked in with other ingredients—a non-hysterical quantity of cheer, curiosity—that I couldn’t slap a “humiliation” sticker on the toilet like the one Koestenbaum had stuck on Arbus’s photographs, nor describe it as a Piper-like “discomfort” or a Walkeresque “shame.” 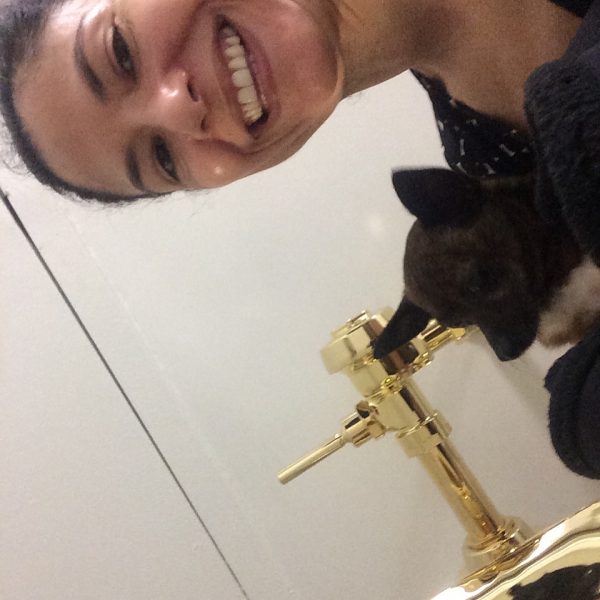 The better word might be paraesthesia, from the Greek root terms for “alongside” (para) and “sensation” (thesia), which can be defined as “wrong feeling.” Paraesthesia carries with it bigoted and medical baggage, which make it an uneasy choice as a descriptor. Austro-German psychiatrist Richard Freiherr von Krafft-Ebing used it to denote homosexuality in his 1886 work Psychoapathia Sexualis, and the term today brands certain neurological disorders.

Yet, retrofitted, paraesthesia remains an apt name for the emotional condition of the spectacle-participant who finds humiliation unexpectedly boomeranging at her, and who negotiates it with a nimble psychic dance that keeps putting her “good time” at the center of the experience. Paraesthesia fits because the mental state, or sensation, truly is “alongside”: You think you’re chasing one particular dragon, but you find yourself getting pushed onto another track where you must flee some other beastly feeling. And then you hop back on the preferred route again.

That’s what I did, anyway. America isn’t great art. If the Guggenheim wants to be a place of artistic transcendence, then it has failed with this installation. The toilet is nasty and crude and bad comedy. But you’re “doing it” as part of an art community in a contest of endurance, and participating in social media fame. I only stayed in the bathroom for two, maybe three minutes, and took all of my photos and stared at the golden bowl and cursed and cackled in a paraesthesiatical fury. Then I walked out and grinned at my man and the never-ending progress of people who all grinned back at me and wanted to be where I was.

It’s not the first time that I ever felt happy, filthy, and angry at the same moment. But it’s certainly the only time I’ve ever shuddered through all three emotions while at a museum.