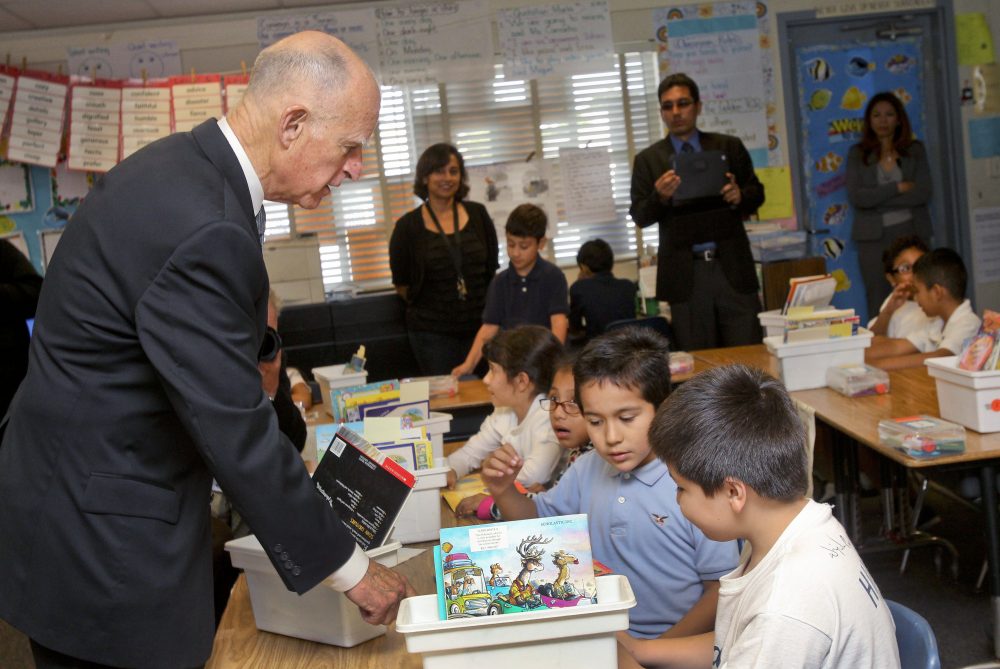 Is California abandoning its poorest students?

That question would be dismissed as absurd by our state’s education leaders, especially Gov. Jerry Brown and the State Board of Education. For years, they have been building a new educational architecture they say will do more for the poorest kids in the poorest schools.

But as the many elements of this architecture are put in place slowly—and I do mean slowly—they have begun to look like a Winchester Mystery House, so full of complicated rooms that the structure doesn’t fit together coherently. On its current path, the emerging educational architecture of California seems likely to undermine public accountability, resist meaningful parent and community engagement, and make it difficult to figure out whether disadvantaged students and the schools they attend are benefiting.

The new architecture is built on a foundation known as Local Control Funding Formula, a multi-piece formula that is designed to give more money and authority to local school districts, especially those with concentrated poverty. That formula was approved in combination with the establishment of new Local Control and Accountability Plans, intended to give parents and communities more say in how money is spent. The state also adopted Common Core standards for math and English that emphasize critical thinking, and combined the standards with a computer-based testing system to better track individual students.

And last month, the state wrapped all of these elements together in a new accountability system to track the progress of schools and students on new measures that go far beyond test scores.

The governing theory is that all these new educational structures—in concert with social programs to raise the wages, improve the health care, and provide more social services to poor Californians—will make it easier for a greater number of disadvantaged students to prepare for college and careers.

But examining the pieces in detail, the architecture is so hollow and unsteady that it’s hard to understand how students will benefit.

Consider the new accountability system, approved by the State Board of Education in September. The board passed it in a meeting that was heavy on self-congratulation, and light on detail.

The system introduces six indicators for measuring schools (such as college and career readiness, and the progress of English language learners) as well as local factors, like parental engagement and school climate. This was hailed as an improvement on a previous system that the board abandoned three years ago and had not replaced, leaving Californians in the dark about how their schools were doing.

But, at least for now, this new approach to accountability offers more clouds than sunshine. It could be years before data for some of the new measures exists. There are also real questions about how you could reliably measure parental engagement and school climate, or whether the effort would be worthwhile, given all the other demands on California districts.

Even worse, the board resisted urgent calls from many education and child advocacy groups to boil down this new system into something that the public might be able to understand. Instead, the board, defiantly, released a sprawling draft built around a confounding color-coded grid that deserves immediate induction, without the customary five-year waiting period, into the Hall of Fame for Bureaucratic Idiocy. “Making sense of it is practically impossible,” the Los Angeles Times editorialized.

… the Local Control and Accountability Plans required by the new formula are like the Holy Roman Empire—they aren’t local, they don’t really provide control or accountability, and they aren’t even plans.

Fixing this accountability system isn’t just a matter of redesign, which the board is saying it will do next year. The trouble is that the accountability system is built upon the other pieces of the new architecture, and those are similarly confusing. The new local control formula encompasses eight priorities, many of them hard to measure, and myriad sub-priorities and different grant formulas under those. And the Local Control and Accountability Plans required by the new formula are like the Holy Roman Empire—they aren’t local, they don’t really provide control or accountability, and they aren’t even plans. They are longwinded, technical answers to longwinded, technical questions required by a state template. School districts, naturally, have struggled to get parents and community members to participate in drafting these documents, which in many cases run to hundreds of pages.

And if all that doesn’t give you a headache, the new system could soon get even more complicated. The federal government is in the process of developing its own plan to help the worst-off schools, under the new Every Student Succeeds Act, the successor to No Child Left Behind.

The federal law requires states to identify the bottom 5 percent of schools and figure out ways to improve them. California’s emerging architecture doesn’t provide any easy way to identify those schools. Instead, state leaders are lobbying against the new federal system, and continue to design the state’s system in ways that are at odds with the federal law. Last week, Gov. Brown vetoed a bill, overwhelmingly passed in the legislature, to require the California system to align with the federal one.

In the end, it’s possible there will be not one but two accountability systems for California schools—one answerable to Sacramento, the other to Washington.

In watching this process, I can’t help but wonder if all the confusion isn’t cynically deliberate. Throughout, the state has followed the advice of its powerful teachers union, the California Teachers Association, which has opposed any system that offers coherent ratings, and thus meaningful comparisons, of schools. The union prefers to have as much evaluation as possible done at the local level, where they are most powerful. By enacting a state system that no one can manage or understand, California may effectively leave things in the hands of the locals.

What does that mean for making sure poor kids are actually making progress? It may mean that we never know. Gov. Brown gave the game away in an interview with CALmatters earlier this year when he questioned whether the achievement gaps between disadvantaged and other students can be closed, even with the help of his Local Control Funding Formula (LCFF).

“The gap has been pretty persistent,” he said, “so I don’t want to set up what hasn’t been done ever as the test of whether the LCFF is a success or failure. I don’t know why you would go there.” Closing achievement gaps is “pretty hard to do,” he added.

The defenses of the emerging system are equally lame. State Superintendent of Public Instruction Tom Torlakson has argued that the complexity of the new system is a virtue—since education, and life for that matter, is complex.

The State Board of Education president Michael Kirst, a Stanford scholar whose writing on educational systems is distinguished by its clarity, has in this instance taken to issuing uncharacteristically foggy pleas for patience and delay. We’re still ironing out the kinks and the whole system will evolve continuously, he argues. “Concluding now that the system is too complex,” he wrote for the website EdSource, “would be no different than arguing that people would not be able to use a smart phone based on the engineering specifications when the device is still in development.”

Professor Kirst is right about the need for patience, in a way. It will take at least until 2019, when California finally gets a new governor, before Californians will have any chance to stop construction on this incomprehensible mess, and to focus coherently on our poorest students.