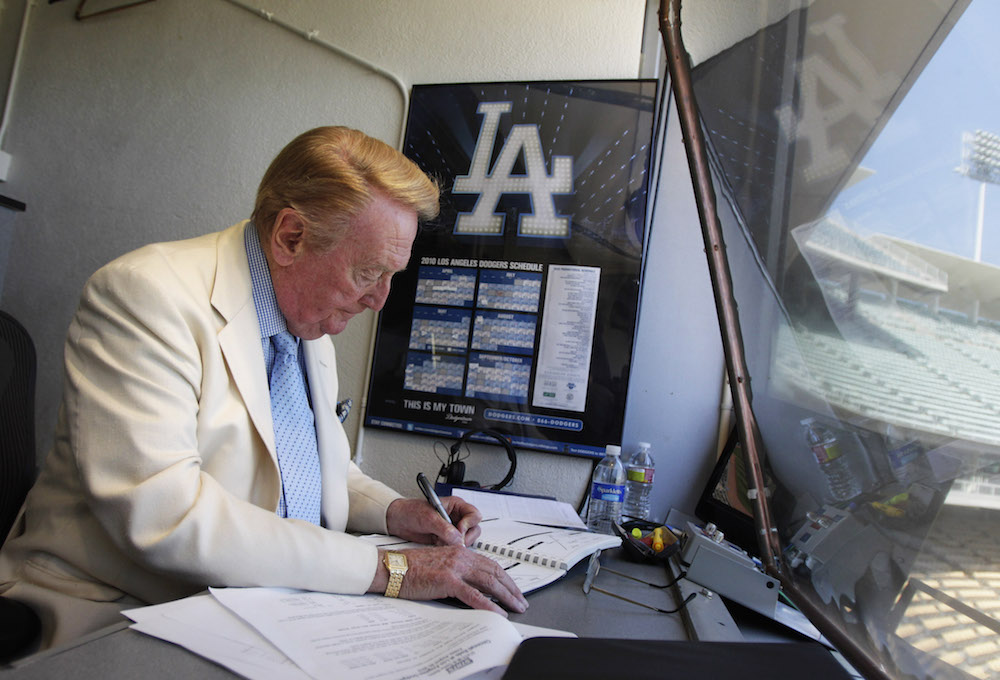 Vin Scully, that is. The Hall of Fame announcer for the Los Angeles Dodgers will call his last game this Sunday, October 2, a month shy of his 89th birthday. That retirement has touched off a national celebration of Scully’s announcing mastery, his storytelling methods, and his many contributions to baseball through 67 years with the Dodgers.

But what deserves even more attention—including from Californians who couldn’t care less about sports—is the smart, progressive way he planned his retirement.

In this country, retirements are often abrupt. People depart the workforce suddenly and at a time decided by numbers—a company rule, a buyout, Social Security calculations, or retirement benefit formulas—not what’s best for retirees or the workplaces they’re leaving. Formula-driven retirement is standard in California’s public sector, where pension rules sometimes push people to retire earlier.

Scully’s retirement, by contrast, was anything but abrupt. He phased in his departure over two decades. Back in the mid 1990s, as he approached the age of 70, Scully—who in his prime announced not just Dodger games but also national football, baseball, and golf—pared back his duties. He focused solely on baseball, then dropped national broadcasting. Then, a decade ago, he gradually reduced his Dodger obligations, mostly by progressively limiting his travel (first he stopped going to the East Coast, then he stayed west of the Rockies, then he limited himself to games in California). In his final year, he worked home games almost exclusively.

Describing this long, slow phase-out, Scully once said, “I would like to disappear like the Cheshire Cat, where [at the end] the only thing left is a smile.”

The Cheshire Cat Strategy has been a success. Scully has remained robust, his sharp, wide-ranging observations carrying nine innings of a game—solo—with characteristic ease. (Other, younger baseball announcers typically have on-air partners and work only some of the innings).

This super-longevity has huge value to the Dodgers and their fans. The myriad tributes to him these days, as he retires, emphasize how his knowledge and long memory have made him a back-office resource to the nation’s second most-valuable baseball team. And fans treasure how he’s connected them and their families across more than three generations; Angelenos have been writing letters and Facebook posts about how their parents, grandparents, and great-grandparents all shared the experience of listening to Scully.

Could Scully’s phased retirement be a model for other Californians? The question might seem daft. After all, this state famously thinks little about its older citizens (Scully is a special case), preferring to celebrate younger technologists and stars who “innovate” or “disrupt” or “invent” the new. And retirement has become one of California’s nastiest legal and political minefields, especially when the conversation turns to pensions and retiree health care for government workers. Some of us see robust pensions and retiree health care as underfunded, expensive indulgences and a form of inter-generational theft, with the old robbing the young. Others see any attempt to reform pensions as a scheme to impoverish workers. The two sides have been fighting bitterly via ballot initiatives and litigation for decades.

These retirement wars leave little room for a conversation about how we might make the so-called golden years better for all of us—for retirees, for businesses, for governments. But that’s precisely the conversation California needs to have.

Scully once said, “I would like to disappear like the Cheshire Cat, where [at the end] the only thing left is a smile.”

Our state is rapidly aging; the number of people 65 and older is projected to nearly double by 2030. At the same time, immigration is flat, and our birth rate has fallen below the level needed to replace the population. So California urgently needs to find ways to coax more productivity out of its most senior citizens.

Instead, we watch as valuable baby boomer workers retire, leaving huge voids of knowledge and skill that can’t easily be filled. Government agencies in particular are finding it hard to hire and retain replacements for retirees who had specialized knowledge and high-level financial and technical skills. New hires too often leave after they’re trained, because they can make more money in the private sector.

Part of the answer to this problem lies in Scully’s example: we must make it possible for valuable workers to stick around into late old age. The popularity of Gov. Jerry Brown, who will be 80 when he leaves office in 2018, suggests there is some public appreciation for having senior citizens work long past retirement age. (Brown himself likes to joke about the fiscal benefits of long-serving full-time workers; our pension system would be fully funded, the governor jokes, “if everybody in state service worked as long as I have.”)

But Brown, who is childless, has a life built around public service; it wouldn’t be a surprise to see him run for another public office, like controller, once he’s moved out of the governor’s mansion. For people with a broader array of family obligations, a phased retirement like Scully’s makes more sense. The central principle is flexibility: the ability to mix varying levels of work with life in a way that makes both better.

But our retirement and work systems aren’t agile enough. To the contrary, they’re highly complicated, so full of rules that designing a flexible schedule, while legally possible, can be more trouble than it’s worth. I know a number of state retirees who still work, but under very informal arrangements involving few hours of paid work, or even volunteering for agencies or officials they admire. Designing flexible and busier arrangements can bump up against the strict limit on the number of hours someone can work after entering the state’s CalPERS retirement system: 960 hours a year, or less than 20 hours a week. And those limited part-time options are often discouraged because, in the context of the pension wars, government officials fear accusations of permitting “double dipping.”

Legal scholars advise me that legislation would be needed to establish a new category for workers who want flexible, phased retirements in the public sector. So I hereby propose that California governments create the Vin Scully Phased Retirement Plan. When employees reach retirement age, they should be able to enter into a phased plan, subject to the approval of their supervisors, that could be altered by mutual agreement. The details could get complicated, but one goal of the Scully Plan would be to ensure that phased retirement neither hurt, nor spiked, the employee’s retirement benefits.

Phased retirements are hardly new. Smart businesses offer them, as do academia and the courts—just ask emeritus professors and senior-status judges. Why should a state that has paid employees for so long completely lose the benefit of their experience and knowledge?

The best argument for phased retirement is that it’s good for the retiree. Such connections to work and colleagues can keep older people’s minds sharp—and even help them live longer. Indeed, some research suggests that older people who work moderately—25 hours a week— are especially productive and creative.

“Hang in there,” is cliché, in sports and life. But it would represent real progress as a principle for reorganizing how we work late in life. “All I know,” Vin Scully recently said, “is I’m eternally grateful for having been allowed to work so many games.”