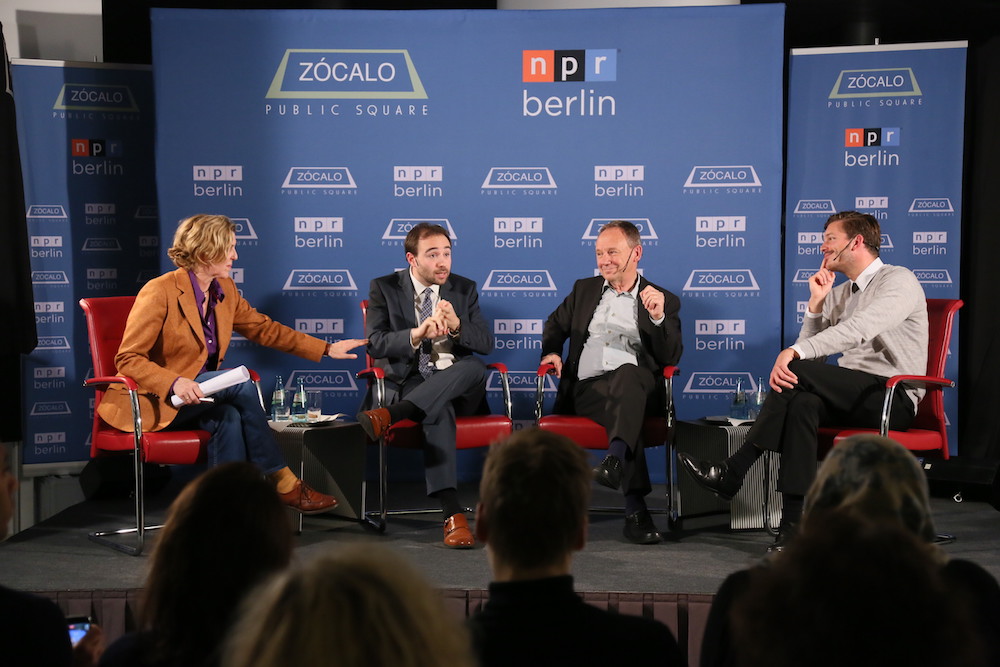 The rising populism in today’s Europe is not merely the result of recent decisions by politicians, but also must be understood as a consequence of long-term changes that started more than 25 years ago with the fall of the Berlin Wall, said panelists at a Zócalo/NPR Berlin event.

“This is a transformational hangover to fundamental changes in our modern societies,” said Timo Lochocki, a Transatlantic Fellow with the German Marshall Fund. He suggested that surging populism set up a challenge for democracies: “We all can learn a lot from the so-called populist, namely to win the hearts and minds of the people.”

The event, held at the Berlin headquarters of global software giant SAP, attracted a full house. The lively conversation focused on the growing importance of new political parties and populist movements both in Europe and North America.

Harvard University political theorist Yascha Mounk argued that ruling mainstream elites had failed to properly explain and communicate to their publics the fundamental changes of recent years. And that failure led to a deep line of conflict that materialized during last year’s refugee crisis.

“When suddenly more than a million people from abroad want to enter your country, you need to have a lot of good reasons to win the support of the people,” said Mounk, who has been reporting on the rise of right-wing populist parties, especially in East Germany, for the weekly newspaper Die Zeit. He added, “Our current leadership was not really good on that.”

Die Welt columnist Alan Posener compared today’s rhetoric from populist political leaders like Hungary’s Prime Minister, Viktor Orban, and the Dutch Party of Freedom leader Geert Wilders to the rhetoric of leaders after World War I, which in turn led to World War II. “We are not in a new world, but in a horrible old one,” he said.

Posener, a former student activist, said it is up to citizens and their governments to confront the rhetoric directly. “This is a choice you make in your head, not in your heart,” he said, and those choices matter, as that post-World War I history shows us. “Yes, there was and there is a crisis, but back then the Americans elected … Roosevelt, while we Germans opted for Adolf Hitler.”

In the conversation moderated by Sylke Tempel, the Editor-in-Chief of the Berlin Policy Journal, the three panelists offered different views on the potential of populist parties and movements to renew democracy, by including views that had not been part of the debate.

On one hand, said Mounk, U.S. Republican presidential nominee Donald Trump’s populism has single-handedly eliminated the culture wars in the United States. But other parties and movements, like the west-wing populist parties in Greece and Spain, are much less of a threat to democracy, said Lochocki.

At the same time, the panelists agreed that it made sense to integrate these new political forces into the existing system of representative government, instead of keeping them out. “Such a co-responsibility will make them think twice before simply talking bullshit,” said Posener. He also proposed that Germany’s Christian Democratic Union, the party of Chancellor Angela Merkel, open up to right-wing forces like the Alternative für Deutschland (Alternative for Germany), which has won a greater share of the votes in recent state elections across Germany.

In response to questions from the audience, the panelists dug deeply into the cause of today’s crisis for nation-state representative government and liberal democracy. Some suggested that the populist forces are more of a symptom than a cause of the current crisis.

But panelists agreed there is a growing discourse on economy, social cohesion and war and peace that might be called “post-fact”—because it’s not grounded in facts. And with that discourse fanned by exclusive Internet communities and conspiracy-driven theories, it will be hard to recapture a centrist and humble democratic culture.

“A lot of damage has already been done,” said Tempel, the moderator. She characterized the split in perception and politics as a growing gap between “populist“ Provincia and “elitist“ Urbania.

Addressing this gap “will need indeed a lot of pro-active re-democratization, integration and communication to get forward,” said Lochocki. “And we all need to learn to blame ourselves more instead of always the others.” 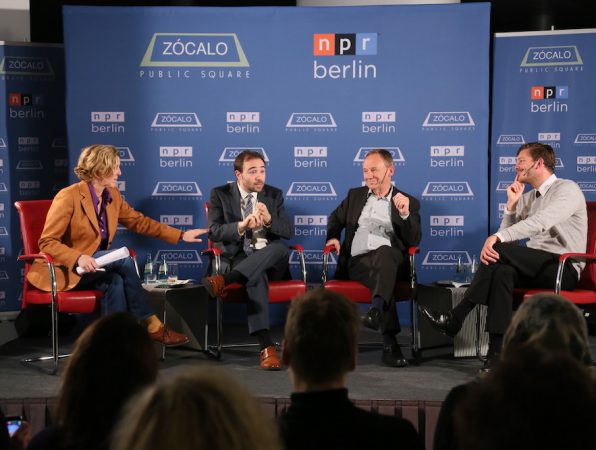 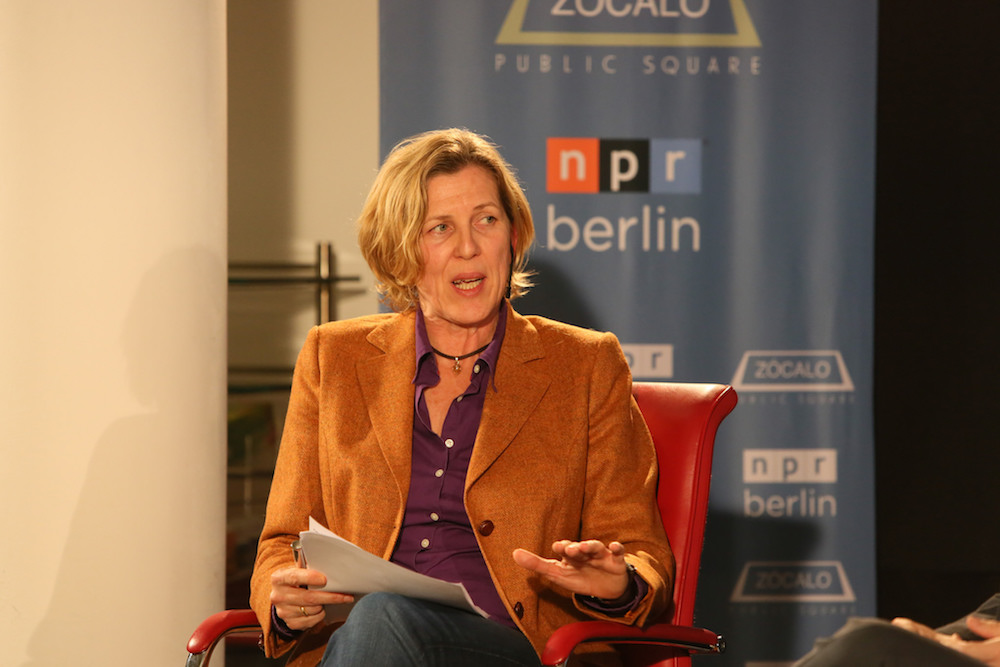 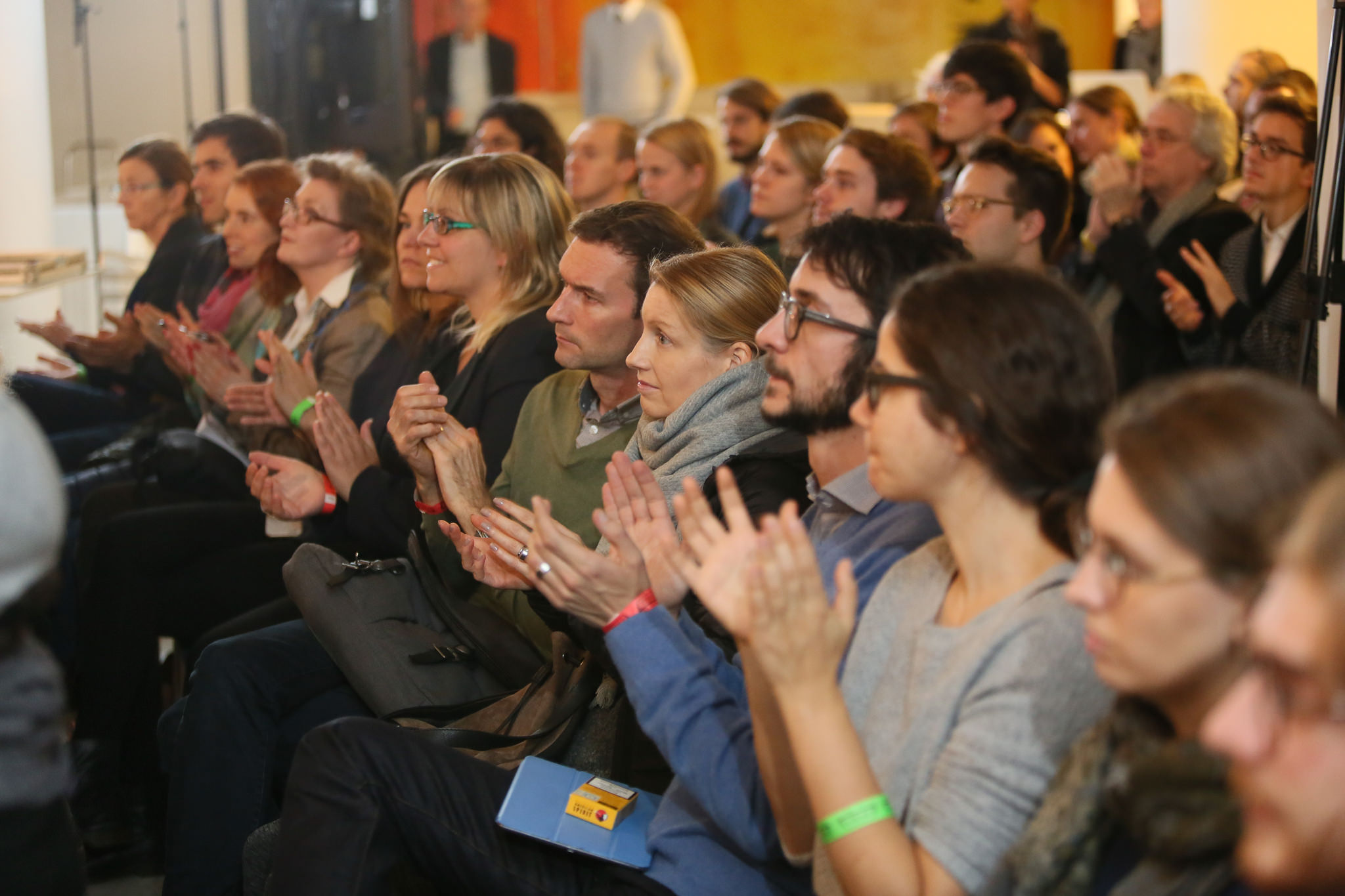 A full house at SAP Berlin. 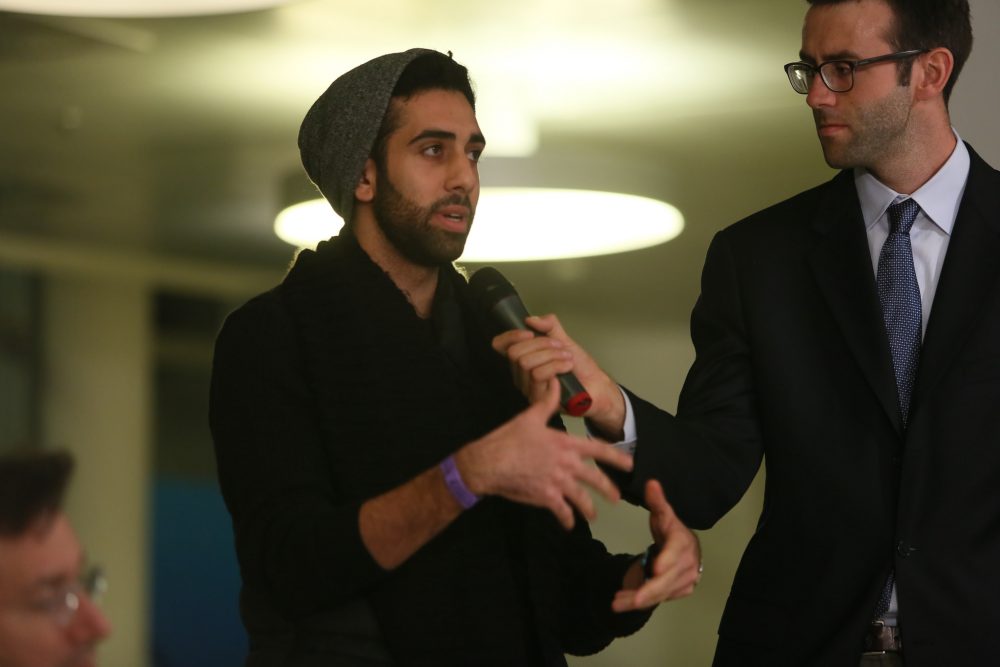 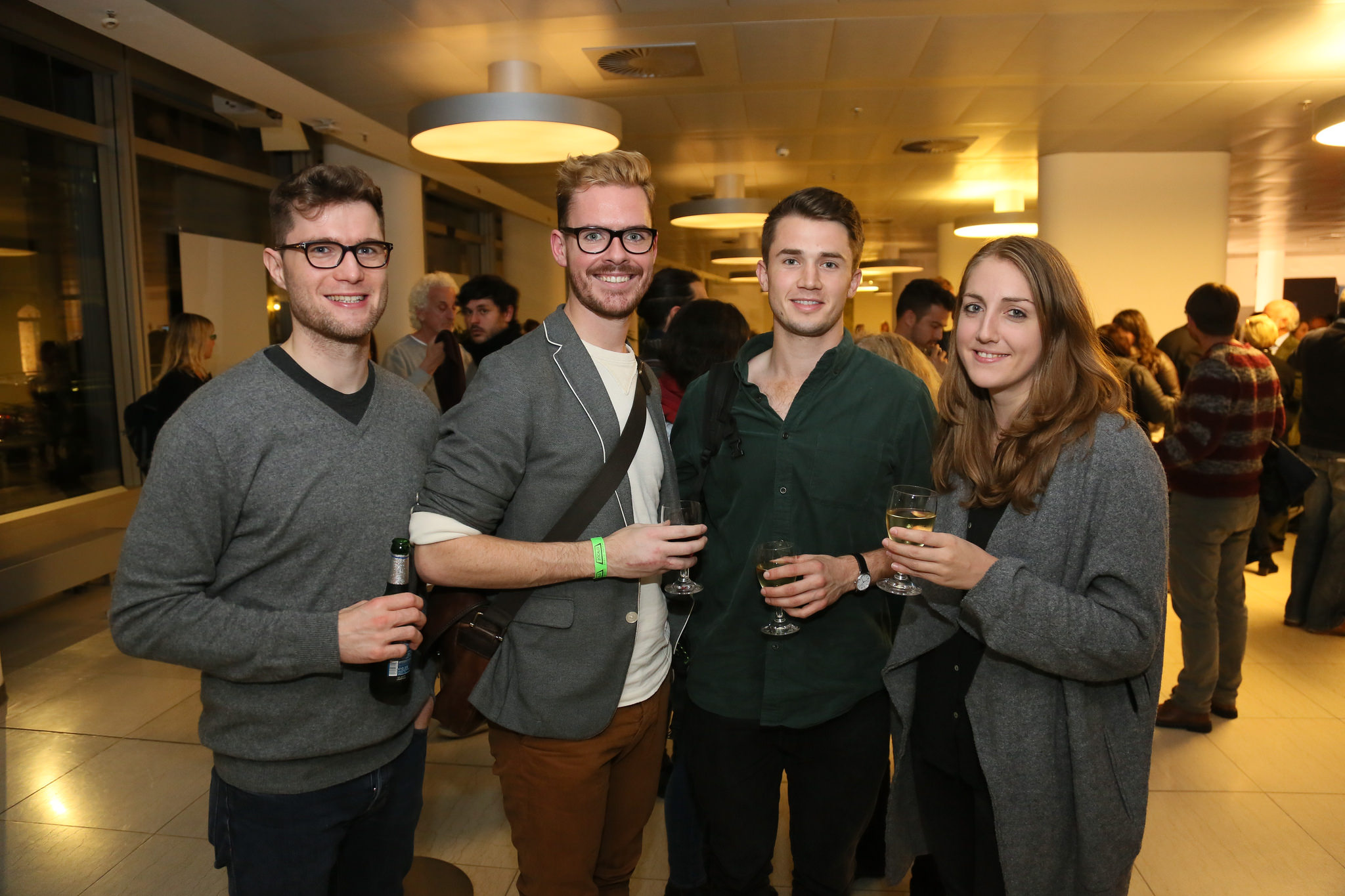 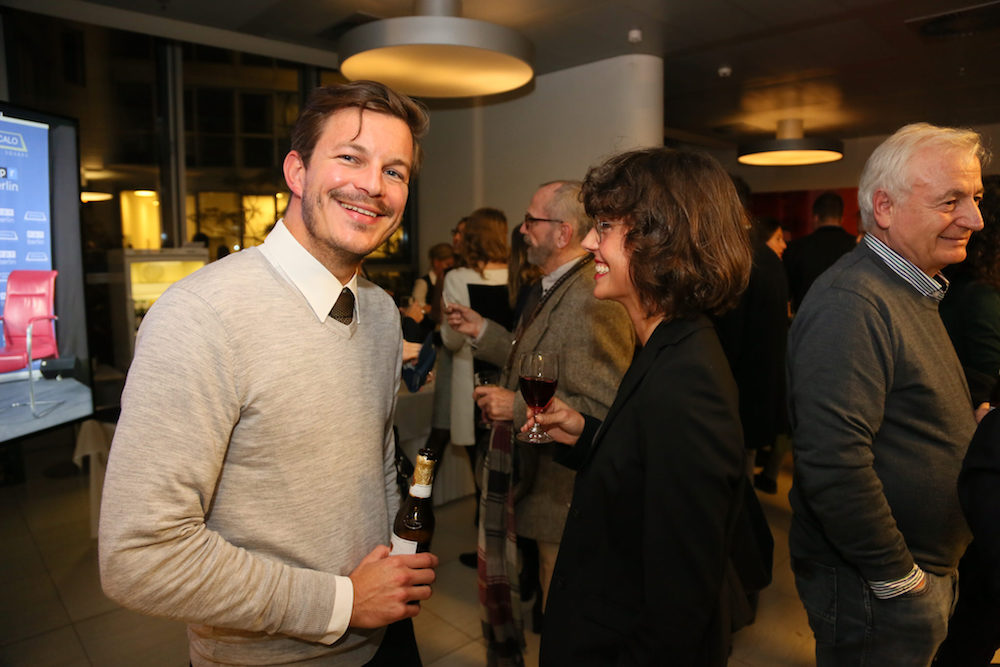