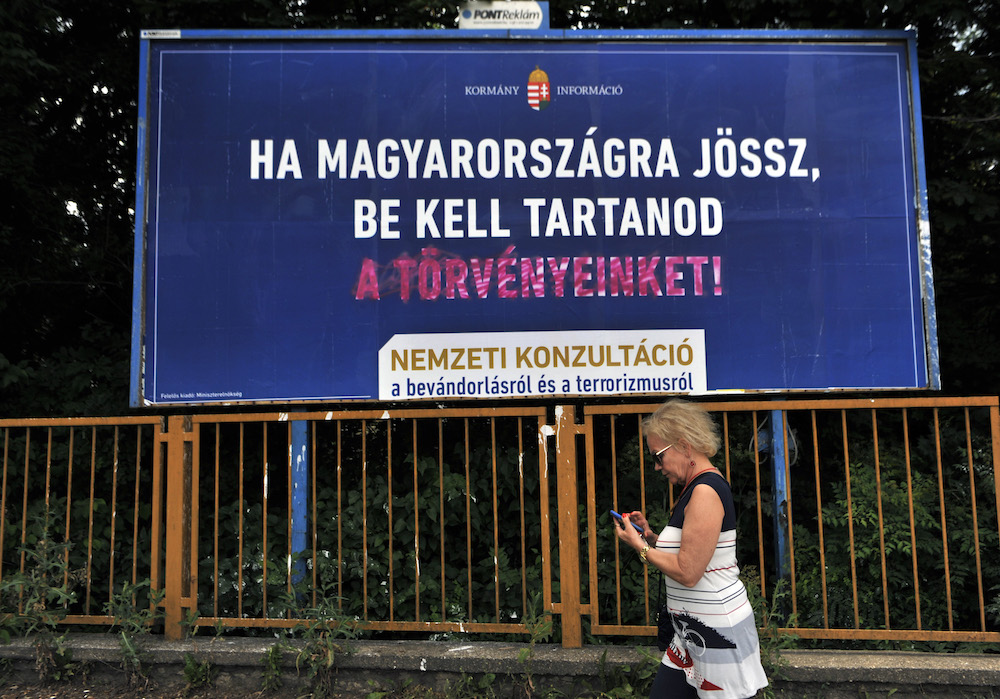 FOR STORY: HUNGARY BILLBOARD BATTLE - A woman is walking in front of a vandalized anti immigration billboard reading “If you come to Hungary, you have to respect our laws!” in Budapest, Hungary, on June 15, 2015. Hungary’s central-right government has launched a controversial billboard campaign against immigration while UNHCR introduced its counter campaign highlighting successful refugee stories. (AP Photo/Bela Szandelszky)

I was a young man studying journalism when conversation about the first Fidesz government in Hungary broke into our dining room. It ended with a dead political silence in my family.

It was 1998. Before that, the debates during family lunches on Saturdays had never been particularly meaningful; we never listened deeply to each other. I usually wanted to express to my parents my disappointment and hatred towards our leading politicians. But the rise of Fidesz—a conservative party led then and now by Prime Minister Viktor Orban—changed the dynamic in our home. My parents had been bitterly disappointed by government before, and saw the Social Democrats as the previous system’s rulers in new costumes. For them, Fidesz was a new hope. Neither of us had the skills to discuss our disagreements, so my parents banned talk of politics in our house.

Nearly two decades later, I discuss politics with my kids. While driving them to school from our North Budapest home this fall, we encounter more than 12 billboards promoting mind-washing political messages in just a few kilometers. Different billboards repeat the same message, sometimes only meters apart about migrants and the threat they cause to Hungary. This is communication pollution.

The nationalist pro-Fidesz messages on those billboards have foreign origins. The American Republican campaign consultant Arthur J. Finkelstein helped design Orban’s communication tactics that led to his 2010 victory and return to the prime minister’s office. (He previously occupied the office from 1998 to 2002). The Finkelstein-Orban method was to amplify images of political enemies in public space—those billboards—with large-scale hate campaigns. Hungary had never before had this volume of political trash propaganda on the streets. But we got used to it very quickly and grew accustomed to judging each other as being supporters or opponents of Fidesz.

Fidesz won a two-thirds majority in local and countrywide elections in 2014 with obvious gerrymandering and without a party program; it was an electro-shock for democracy. They changed hundreds of laws, and Orban, an ardent soccer fan, made soccer his metaphor—he likes the full-field attack strategy, both for his football and his political action. In time, many Hungarians realized that playing soccer for Orban also means that referees can be bought by one team, and that the field’s boundaries can be changed during the game. Johan Huizinga, the famous playwright, philosopher, and anthropologist, long ago pointed out that the game-changer is also part of the game, and the rule-breaker can control the players with new rules.

Orbans concept was to keep democracy, but minimize it. His minimal democracy was painful for me to accept. I’ve become a witness to the rebirth of communist political and media tactics to gain the most power one can get. The tactics continue, even though Fidesz lost some power in 2015, when it lost its two-thirds majority in the government.

In limited democracies, public debate and civic engagement have little significance. … once a governing group marginalizes the citizenry from democratic decision-making, it can help itself (and its friends, lovers, relatives, and sycophants) to the spoils of governing.

You may have read from afar about Orban’s nationalist populism, and his anti-democratic tendencies. But it is another thing to see it up close, as a Hungarian.

In limited democracies, public debate and civic engagement have little significance. It’s unimportant, also, to maintain the image of a balanced public media. Yes, there are public interactions, but they serve merely as a background in the theater where stakeholders can have their say to manipulate the questions posed to the public—but without any intention of eliciting answers. The official doors for bottom-up social innovations are closed. The challenge for civic organizations, like the Hungarian Occupy movement, or the transparency-focused group Glass Village, is to make voices heard, and to get people to participate in civic platforms, like the ones with which I work.

Meanwhile, Fidesz has continued to devour the state, taking full advantage of the fact that once a governing group marginalizes the citizenry from democratic decision-making, it can help itself (and its friends, lovers, relatives, and sycophants) to the spoils of governing. The Fidesz government has rewritten the constitution and slapped a “special project” designation on numerous initiatives and state investments that places them on an insulated fast track, beyond any questioning and ordinary oversight processes. It’s like a martial law for state spending, to advance big projects that enrich those close to the ruling circle while restricting any local or democratic involvement in the decision-making.

Imagine if your government could do anything in your city, even in front of your house, without the democratic approval of the local community.

They do whatever they are not ashamed to do.

There are several very large-scale projects that are awakening citizens in Budapest to the fact that their local rights and security have been stolen by the central government and there is no one to protect their values. Examples of such special projects include the new Russian-financed nuclear power plant; the Liget project, which would relocate museums in the middle of one of the oldest public parks in Europe; the building of football stadiums; and the relocation of the Prime Minister’s office to the historical castle district.

There are rules for governing in this system. Never admit a mistake. Strike back mercilessly at critics.

Citizens are not permitted to have a say in these investments; they are presented to the public as a fait accompli. Their financing, purpose, design and, perhaps worst of all, their environmental impacts, are all matters left to those in power.

There are rules for governing in this system. Never admit a mistake. Strike back mercilessly at critics. And repeat catchy mantras that remind people of the previous failures of other political parties. After years of this, these tactics of communication have spread from the billboards and press releases to many regular conversations between citizens.

There are other rules, too. Weaken the democratic safeguards of checks and balances. Turn Parliament into an assembly line for the laws you wish to enact. Attack the freedom of information, turning away the investigative journalists who ask for public data. Capture and direct public media and press agencies, and co-opt private media by your selective deployment of state advertising. Copy the authoritarian Russian model—in other words, including the brazenness of its lying without fear of consequences.

There is a shame in living like this, a shame in understanding what has been done in the name of democracy, by the power of the majority. Many of us Hungarians feel depressed by the unstoppable, overwhelming force of these tactics. Can Hungary be considered a democracy in the face of growing favoritism, corruption, and the plummeting levels of trust towards the government, parliament, and public institutions?

Orban is now in the middle of his third term, and he faces a difficult personal choice. How does he conserve his power? In this sense, he is like any regular politician. But in consolidating his power, his biggest obstacle may be the damage he has done to our society—the way he has bred division, a hunger for power, and hate in our society. Can anyone govern a country like the country Hungary has become?

There comes a point of no return for authoritarian democracies when they must either correct course to retain any claim to be a democracy, or abandon all pretense and embrace their authoritarianism. I am afraid Hungary is approaching that point, and I am worried that enough Hungarians, let alone outsiders able to influence our government, are paying attention. Sometimes it’s just easier to look away.