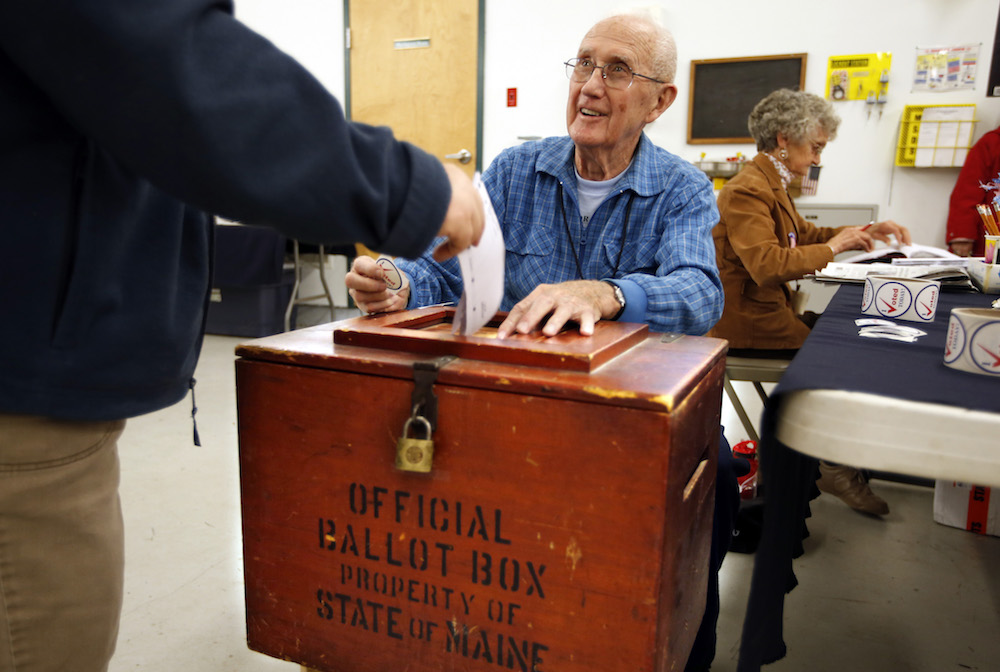 Just before the polls closed on election night, I met with 12 of my townspeople at our town hall in Maine, raised my right hand, and took an oath to uphold the federal and state constitutions.

We were then assigned to bipartisan pairs (Republican, Democrat, and Unaffiliated) to spend the next two-and-a-half hours elbow to elbow, reading aloud each of the 350 ballots cast in our town of 419 registered voters (out of a total of 500 or so residents). With our identical red pens and tallies, along with our highly stylized reading and movements, we became the littlest moving parts in a great procedural democracy that has been part of the stable transfer of power for more than 200 years.

Fewer than 0.6 percent of U.S. ballot votes are counted by hand and those are from the small towns in Maine, New England, Michigan, Wisconsin, Minnesota, and Alaska that manage their own elections and cannot afford to invest in optical scanners.

Today, for federal elections in most of the country, voters use paper ballots that are optically scanned or electronic voting machines. After the 2000 crisis, when hanging chads on punch cards became an issue in the presidential election, Congress passed the 2002 Help America Vote Act providing money to buy new voting equipment for towns all across the country. But by 2020, those machines will be nearing the end of their lives, which the Presidential Commission on Election Administration described as an “impending crisis.”

With so much up in the air in American voting, we hand counters offer continuity—and may play a surprising role in the future by ensuring impartiality, transparency, and trust in an increasingly sophisticated and opaque system for casting and counting votes.

Our town hall is straight out of Norman Rockwell: A spare, single story northern New England clapboard building with a floor made of worn unfinished boards. It was originally built around 1850 for the town band, relocated once in the 1880s by 42 teams of oxen, and then moved to its present position in 1949, with residents building the foundation themselves to save money. In the same spirit, we all pitch in to count votes.

There are three overseers of this voting process: the registrar of voters, the warden, who opens and closes the polls and oversees the tally, and the town clerk, who was once in the merchant marine. In my town, all three positions happen to be held by women, each of whom is attentive to the precise procedures and to their greater purpose—which is not only to count the votes but also to reinforce the integrity of a process much older and larger than ourselves.

At 8 p.m. on the recent election night, the warden declared the polls closed and the poll workers gathered up the remaining unused ballots and drew a red line across each one, rendering them useless. Then the old wooden ballot box was opened and the ballots were dumped on a large table in the center of the room. My fellow poll workers and I quickly unfolded the ballots, arranging them in piles of fifty.

I found my partner, a neighbor who I know slightly. I am registered “Unaffiliated.” I do not know his affiliation, and neither of us asked. Good fences, as they say, make good neighbors.

… hand counters … may play a surprising role in the future by ensuring impartiality, transparency, and trust in an increasingly sophisticated and opaque system for casting and counting votes.

In Maine, the law requires that bipartisan pairs read the contents of every ballot in a way that is “verbal and concurrent.” In other words, we read in unison from the ballot: “For President: Donald Trump, for State Representative, Chellie Pingree,” and so on, through to the uncontested candidates for Registrar of Probate, Sheriff, and County Commissioner. On our tally sheets, there were spaces for 23 options, including official candidates, official right-ins, and blanks. As we read, we made marks in red pen on our tally sheets, which are divided into vertical cells that can each hold five marks. Every five ballots, we compared tally sheets to confirm that we had the same count for each candidate. Every ten ballots we did a verbal and concurrent report on our tally sheets. And so on until we completed all 50 ballots. Then we flipped the ballots over and did the same thing with the six ballot measures on the back of the sheets. By the end of the process, we were hoarse.

Tallying is a chore. It works best when both partners use stylized movements and a slightly singsong cadence. I first did it in the 2014 election, and I’ve ended up with an ungainly routine where I run my left index finger down the ballot to provide a visual anchor while carefully tracking the rows on my tally sheet with my right hand. Still, it’s easy to accidentally mark the wrong cell, to forget to mark it, or to get mesmerized in the chicken scratch of the hatch marks. The process is designed to prevent both accidental mistakes and collusion. And of course, everyone is in the open and easily observed.

Going through so many ballots, I get a chance to see—anonymously of course—how my townspeople have voted. I’m always surprised: Few vote a straight ticket. Many pick and chose between parties and initiatives. Some write in candidates. This time a few rejected all of the ballot measures, which included money for schools and bridges, marijuana legalization, background checks for private gun sales, and a move to ranked choice voting, which would allow voters to chose their first and second choice candidates for state offices. (Ranked choice voting passed, which may be a wonderful thing for democracy but it will add significantly to the work of us hand counters.)

I find that participating in the count is a good way to cope with the aggravating stress of election night. Instead of hitting refresh on CNN and Fivethirtyeight.com to see the latest totals, I am speaking every voter’s will and turning it into a tally. I may find out that my neighbors feel very differently than I, but in the end, we’ll still be neighbors. The town hall will still be standing.

And when I look at individual ballots with their quirky un-ideological votes I know that they are deliberate—I can’t pretend that voter didn’t know what he or she was doing—and I wonder about my own inconsistencies. Still, by revealing our differences, the elaborate ritual of the count reaffirms the deep ideals that hold us together. I’m not surprised that our town has voter turnout of 83.5 percent, compared to national rate of 57 percent. (Maine’s laws also encourage voting: Voters can register to vote at the polls. No ID is required to vote once you’re registered. And people who’ve committed crimes retain their right to vote.)

Part of the reason the tallying process is so arduous is that it makes it easier to recheck each batch of 50 ballots. Hand counts are frequently contested, and have to be rechecked often. Before we left the town hall we separately totaled our tally sheets, cross-checked that they accounted for all ballots in all cells, and completed a final verbal and concurrent check to see that they agreed. We presented one sheet to the warden and wrapped the other around our ballots, secured both with a rubber band and tucked them in a metal box that was then locked and ready for a recount.

Ever since the first mechanical voting machines were introduced in the 1880s, voters have feared that their votes were getting lost. More recently, voters have feared that electronic voting machines might get hacked, or crash without backup. In response, some people have suggested that all ballots in the country should be hand-counted, with thousands of new precincts containing 1000 voters each.

Are we due for a return to hand counts? I talked with David Kimball, professor of political science at the University of Missouri—St. Louis, who has studied how votes get lost, either on the ballot or in the counting process.

“If you want to know exactly how many more votes A got than B, then machines are more reliable,” he said. Hand counting national elections would be expensive and potentially inaccurate. But hand counting does offer something to the institution of elections—albeit in small doses. Both scanned paper ballots and electronic voting machines (which Kimball cautions should provide paper receipts) need to be audited regularly. How do we assure everyone that these audits are transparent and fair? Hand counts.

The long life of hand counting, even in the face of modern improvements, suggests the deeper truth of elections, which is that we’re not merely counting votes today, but building trust and continuity into a larger system that we hope to carry far into the future.