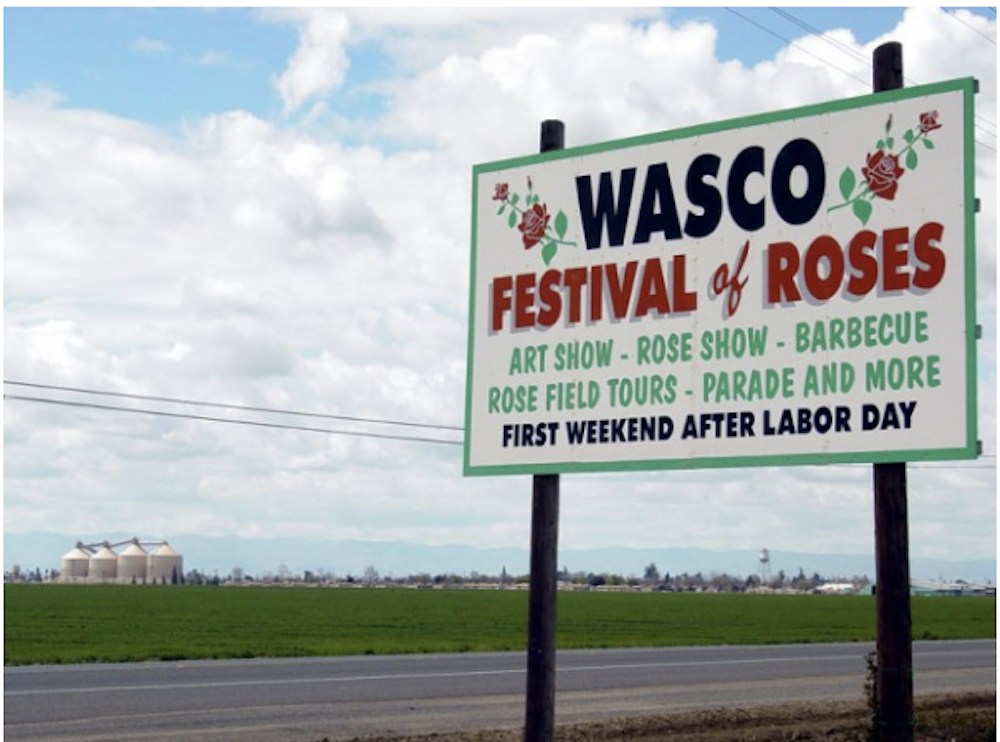 Courtesy of the city of Wasco.

You may never have heard of this small city of 25,000 in the San Joaquin Valley. You probably can’t pronounce it (it’s WAW-skoh).

You could be connected—at least temporarily—by the most expensive infrastructure project in state history.

Your Wasco connection is a byproduct of problems with high-speed rail’s plan for a San Francisco to Los Angeles train. The financial and engineering challenges of tunneling the Tehachapi Mountains have delayed construction to L.A. And the project is short $2 billion to get the train to Bakersfield, which happens to be the hometown of U.S. House Majority Leader Kevin McCarthy, a fierce opponent of high-speed rail.

So, unless the money materializes, the high-speed rail could start by connecting the Silicon Valley to the Central Valley, starting in San Jose and concluding with a temporary station in Wasco, 24 miles northwest of Bakersfield.

A confession: When this plan became public last year, I said Wasco was an unworthy southern terminus for such an ambitious project. But after recent visits, I’ve changed my mind. I now believe that a fast train from America’s wealthiest metropolitan area to the best darn town in northern Kern County is kismet. Wasco offers much of what Bay Area residents might be yearning for.

And don’t worry about showing up in large numbers. Wasco is expert at processing heavy volumes of visitors; after all, the Wasco State Prison, which accounts for about 5,000 of the town’s people and a good chunk of its employment, is also a “reception center” that processes people into California’s prison system and, within months, gets them to the right state corrections facility. Of course, you don’t have to go there—unless you want to be part of the prison’s successful community volunteer program. Wasco offers so much more. 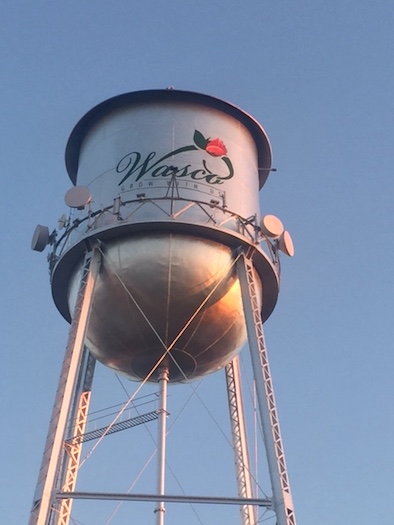 The Wasco water tower. Courtesy of the city of Wasco.

Imagine yourself boarding the high-speed train in San Jose and arriving, less than two hours later, in Wasco. On the way down, to prepare yourself for crossing cultural borders, you’ll listen first to some Korn (a band with Kern County roots) followed by country songs, from the late Merle Haggard’s classic “Radiator Man from Wasco” to the rising L.A.-based country star Jaime Wyatt’s “Wasco,” about picking up her boyfriend the day he gets out of prison.

If the weather is good, you’ll be greeted in Wasco by a spectacular view, from the coastal mountains to the west to the Sierras in the east. This time of year, you’ll be treated to the glory of blossoming almond trees.

If you arrive hungry, you’re in luck. Wasco offers the kind of stick-to-the-ribs vittles that have gotten harder to find in health-conscious Bay Area eateries. Head first to Hoyett’s Sandwich Shop, a centerpiece of Wasco life since 1948, with terrific char burgers and chili (the local gossip is free). On Friday nights, the place stays open late—until 7 p.m.—for fish dinner. And if Hoyett’s is closed, it’s a short stroll to Teresa’s for chile verde or to La Canasta for shrimp cocktail.

Bay Area types should feel comfortable getting around Wasco. Bring your bike: The city has been adding lanes. Or walk: Wasco is building new green spaces and meandering sidewalks to make the city more pedestrian-friendly. And while your Uber or Lyft app won’t work here, the city’s Dial-A-Ride service will take you anywhere within Wasco’s 9.4-square-mile city limits for $1.75, and outside town—paved roads only, please—for $2. (Kids, seniors, and people with disabilities pay $1, and a 13-ride pass is available for $15.)

No stop in Wasco is complete without a visit to the Wasco Union High School auditorium. No joke. The Renaissance Revival auditorium, constructed in 1928, is one of the most colorful and beautiful buildings in California, and deserves its spot on the National Register of Historic Places.

From there, you can walk back toward downtown to do some window shopping. And anything you can’t find downtown, you can pick up at a retailer that Wasco has but San Francisco lacks: Wal-Mart, up on Highway 46.

Wasco is great at putting on special events. There’s the spectacular Festival of Roses in September, the local bands at the Wasco Music Festival in October, and Día de Los Muertos in November. Locals will tell you nothing beats the spectacle of the November rallies before the annual high school football game between the Wasco Tigers and the Shafter Generals, from the town just down the road. (Plus, there’s a good chance you’ll see Wasco win, as they have 10 years in a row).

But the best thing about Wasco may be the slower pace and all the ways to stay chill. The local parks are large and leafy. During hot Valley summers, you can pay $1 and swim all day in the public pool. There’s a skate park, and you can bring your pets along without worry. The local vet, Thomas Edick, is so good that people come from all over the southern San Joaquin Valley to have him look after their animals.

Visitors from the Bay Area who enjoy people watching will not be disappointed. One great spot is a downtown alley where the city sometimes sets up a piano and invites anyone to play; and those who appreciate the weird can search for the Wasco Clown, a scary figure who started appearing four years ago and became an internet sensation.

[Wasco’s] central location makes it a great starting point for trips around the region. … you can watch drag strip racing in Famoso, raft the Kern River, hike in The Wildland Conservancy’s Wind Wolves Preserve, or rent a houseboat on Lake Success near Porterville on the Tule River.

All the fun Wasco offers may leave you ready for a good night’s sleep. Don’t worry: When it’s time for bed, you’ll have options. If you want a hotel, the best bet is the new Best Western on Highway 46. If you decide to settle in for a while, for just $189,000, you can get a terrific four-bedroom, two-bath home with a two-car garage and, according to the listing, a driveway large enough for an RV. You could rent it out via Airbnb, which could have a big future here, since well-to-do locals leave their homes empty on weekends and sneak away to their cabins near Glennville (up in the Greenhorn Mountains).

Indeed, one thing you’ll love about Wasco, once high-speed rail takes you there, is that its central location makes it a great starting point for trips around the region. In the Wasco vicinity, you can watch drag strip racing in Famoso, raft the Kern River, hike in The Wildland Conservancy’s Wind Wolves Preserve, or rent a houseboat on Lake Success near Porterville on the Tule River. You can even hire a limo to take you on a tour to Paso Robles wine country, or rent a car nearby and head up to Sequoia.

Wasco, given its dependence on prisons and agriculture, has an economy very different from technological and sustainable San Francisco, but you have enough in common to compare notes. There’s a solar array near the elementary school offices. A local start-up, Sweetwater Technology Resources, is developing ways to clean up water from the oil industry. And if you want to commiserate about economic disruption, Wasco will hear you. Just as Bank of America abandoned its San Francisco headquarters for Charlotte, Bank of America recently shut down its Wasco branch. Wasco folks will tell you about how their area has had to pivot from being the world’s potato capital to a producer of first cotton, then roses, and, lately, almonds and pistachios.

If you’re one of those stalwarts of Bay Area politics, drop by the Wasco City Hall, where the quiet diversity of the city council is instructive. With one white woman and four Latino men, the council boasts a higher percentage of ethnic minorities than the San Francisco Board of Supervisors. It’s also close to the community; when I spent a morning with Mayor Tilo Cortez recently, constituents greeted him with hugs.

At the council, of course, you’ll discover one giant irony about the potential Bay-to-Wasco connection: The city officially opposes high-speed rail, because of concerns about the effect on local businesses in its path. In particular, the SunnyGem almond processing plant may be condemned and relocated.

Here’s hoping things work out, and, before long, you Bay Area folks will be dancing the night away at Mr. and Mrs. Nightclub near the train station. When you step outside for some air, you’ll appreciate Wasco’s beautiful water tower.

It has lights that change color with the seasons. There’s also the city logo, featuring a rose and Wasco’s welcoming motto, one the rest of California should get behind: “Grow With Us.”