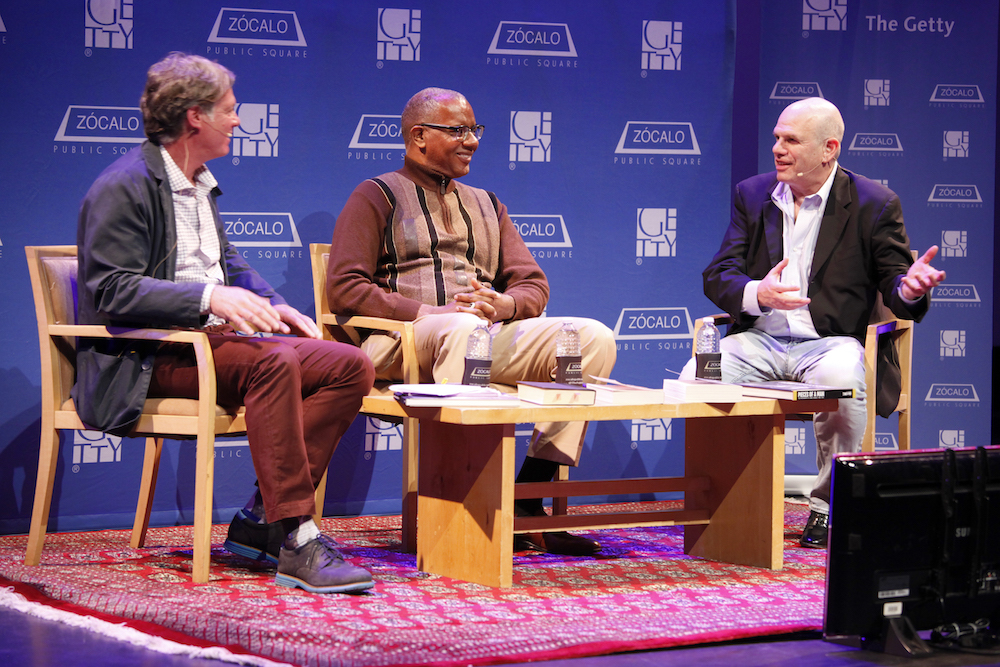 In their different ways, David Simon and Jamel Shabazz both have transformed gritty reality into art, drawing inspiration from the complex, often troubled urban-scapes of places like New York, Baltimore, and New Orleans.

On Wednesday night, Simon and Shabazz came together before a packed auditorium at a Zócalo/Getty “Open Art” event to consider the question, “Does Art Capture Reality Better Than the News?” It’s a subject that Simon, a former newspaper reporter turned television writer, and Shabazz, a former U.S. Army soldier who later worked for a spell as a corrections officer while building his photography career, have had frequent occasion to explore, both personally and as artists.

But Wednesday’s conversation, moderated by Peter Tokofsky, an education specialist at the J. Paul Getty Museum, encompassed many other themes, chief among them the role that art can play in witnessing and even healing society’s wounds (and the limits of that role); and how writers, photographers, musicians, and other artists can craft beauty and truth out of mundane, sometimes ugly and discouraging, daily existence.

For many viewers, Simon’s television dramas, including The Wire and Treme, conjure visions of modern America that are more textured and credible than most anything they witness on the evening news. Similarly, Shabazz’s four decades’ worth of photographs of street scenes provide an insightful running commentary on the trials and exhilarations of African American life that’s not regularly found in daily newspapers.

Shabazz believes part of his duty as an artist is to serve his community and “sound the alarm” about the threats facing it—the crack cocaine epidemic of the early 1980s, the scourge of AIDS, and the damage inflicted by political policies that reinforce old racist stereotypes.

“I have chosen the camera as the weapon to combat what I’m seeing,” said Shabazz, adding that he works from a sense of obligation to keep documenting the impact of social forces on the lives of African Americans—sometimes friends, other times total strangers whose trust he first must earn.

“I never run out of stories to tell,” he said.

At the same time, he never wants to sensationalize the problems afflicting some of his subjects. “My community was already under siege and I didn’t want to add fuel to the fire,” he said.

Simon’s artistic apprenticeship took form differently. He spent many years covering cops as a reporter for The Baltimore Sun, and even today, as an Emmy Award-winning screenwriter, Simon retains the sensibility of an old-school newspaperman. In answer to Tokofsky’s question as to whether Simon the reporter still lurks inside Simon the television writer, he replied: “To be honest with you, if newspapers had not taken the turn they did I’d probably still be working in newspapers,” said Simon, whose life took a decidedly different turn. “Now I’m stuck. I’ve gotten used to it,” he said of his second career.

Simon sharply contrasted journalism as it was when he practiced it 30 years ago with today’s social media-driven maelstrom of factoids, fake news, and “citizen journalists,” a phenomenon that Simon slapped with an expletive.

“Daily journalism, if it’s honest, it’s the known facts,” he said. “In this modern era, it’s whatever you can throw up on the internet.”

The two artists, both born in 1960, hadn’t met each other before Wednesday evening, but quickly discovered much common ground, particularly in their mutual penchant for patient observation and taking intimate, humanizing perspectives on their subjects.

“What you want … in every story I ever wrote, you want to leave people with absolute dignity,” Simon said.

Likewise, Shabazz’s photographs of subway riders, boys at play, and others (some of which were projected onto the walls of the Getty auditorium during the talk) capture the effusive street-style fashions and diversions of African American youth. He records the hopes as well as the anxieties of the Nixon-Carter-Reagan years: the welcoming atmosphere of a neighborhood African American barbershop, as well as the tension of a young man awaiting his Vietnam draft notice.

Simon said that Shabazz’s photos reminded him of a truism: that the most honest things often happen between two people in a kitchen or some other quietly ordinary domestic setting.

Shabazz, who calls himself “a child of the 1960s,” said he learned much from musical urban chroniclers like Marvin Gaye. From books like Leonard Freed’s Black In White America he absorbed a slew of new words and terminology—“racism,” “lynching,” “Jim Crow.”

He also credited Life magazine covers and Playboy interviews with introducing him to people like Fidel Castro and Malcolm X. “Then I would look at the pictures [in Playboy] and learn about light and composition,” he joked, drawing laughter from the Getty crowd.

Simon, who was greatly influenced by New Journalism innovators like Hunter S. Thompson and Tom Wolfe, wrote journalism so packed with the stuff of drama that Hollywood eventually came calling. Like Shabazz, he too said he fell under pop culture’s powerful sway, citing a scene in Martin Scorsese’s Mean Streets (1973) in which one character pummels another with a pool cue. That taught Simon that such unexpected, seemingly incidental details can be used by an artist to establish verisimilitude.

“It’s so incongruous that it made it more real,” Simon said of the memorable screen moment.

The discussion prompted an audience question from Howard Rosenberg, the Pulitzer Prize-winning Los Angeles Times former TV critic, who asked whether there’s a greater burden on mainstream journalism today to take a more active role in shaping the message, away from the spin zone.

Simon replied that in our contemporary society, it takes truth longer to catch up with the stampede of rumor and falsehood streaming across our cellphones.

Earlier, Simon also acknowledged the limitations of what art can achieve, particularly when it has to make a profit. There are three things that sell on commercial television, he said: violence, sex, and comedy.

“The moment you step away from that and are trying to capture anything else in the human condition, you’re saying goodbye to a mass audience,” Simon said. Art, by itself, can’t bring real enlightenment to a male TV viewer who’s only glued to his set because he’s hoping to see some blood or get a quick glimpse of skin.

“You can’t fix that guy with art,” Simon said. Nor can art, by itself, revive the rundown areas of Baltimore, or end violence. 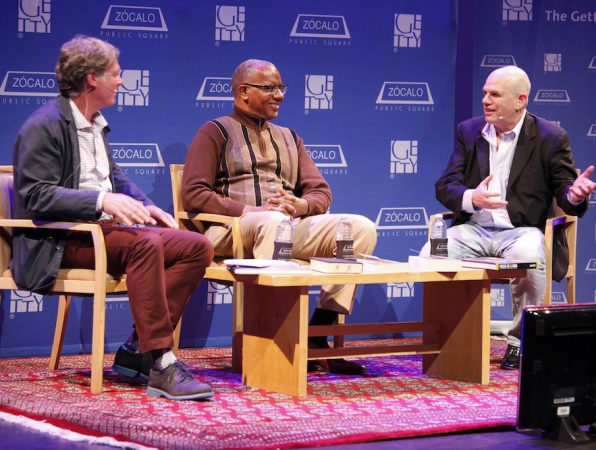 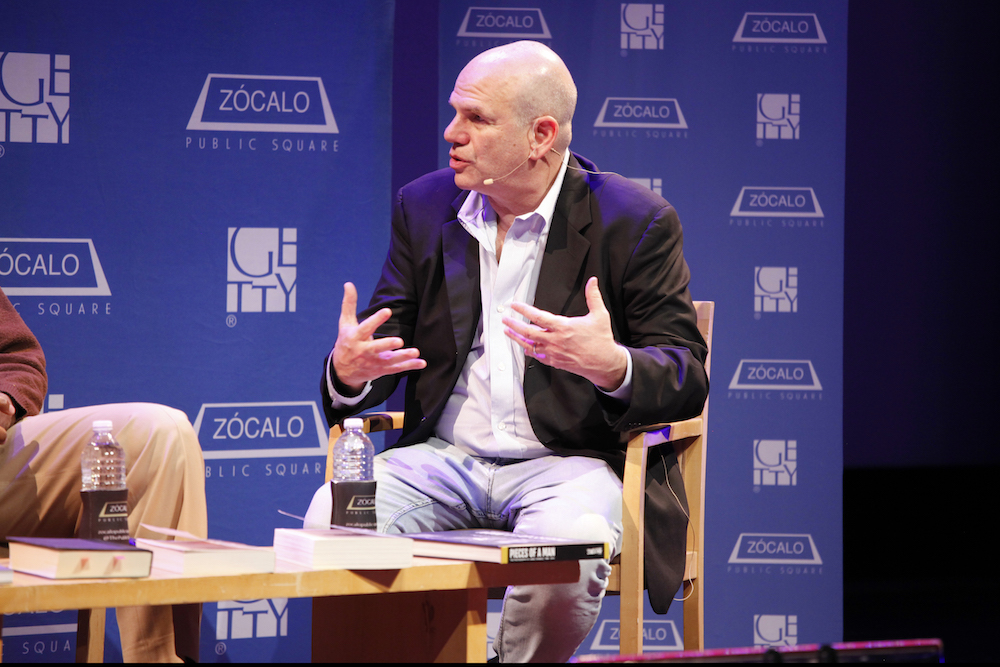 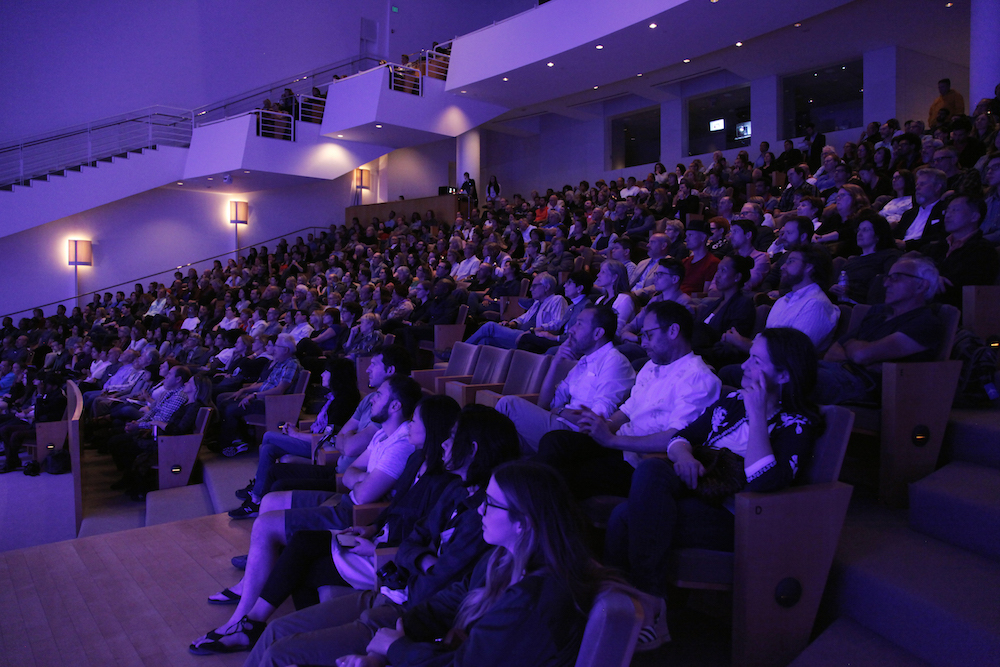 A full house at the Getty Center. 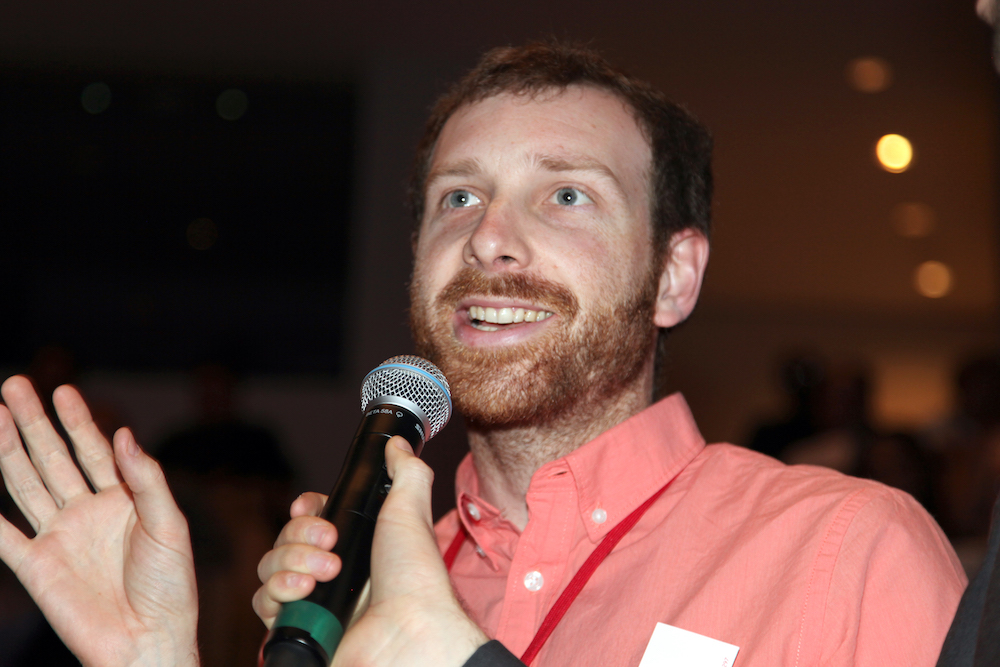 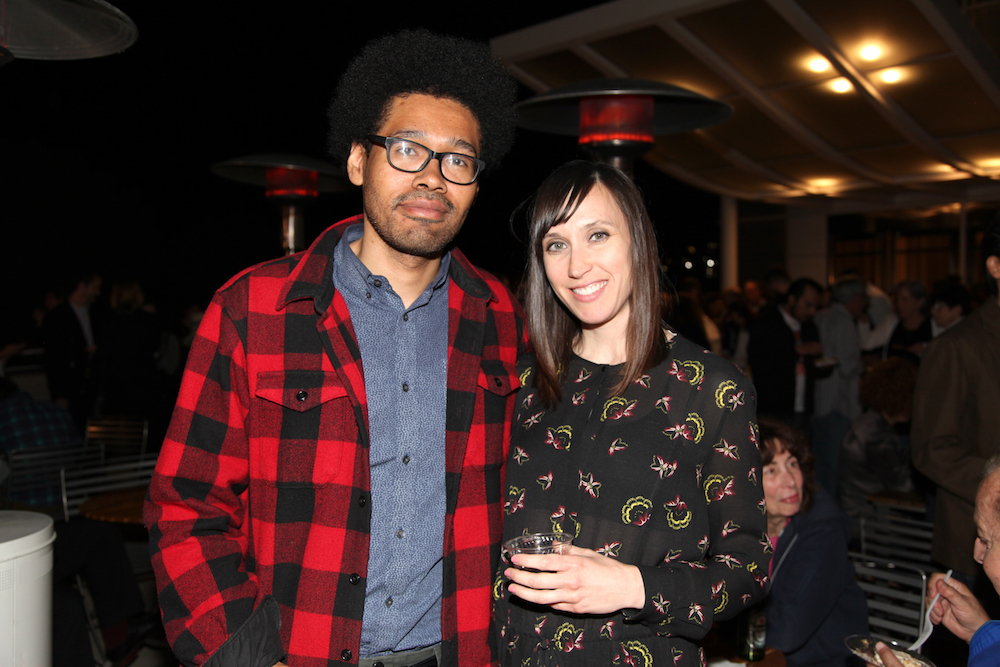 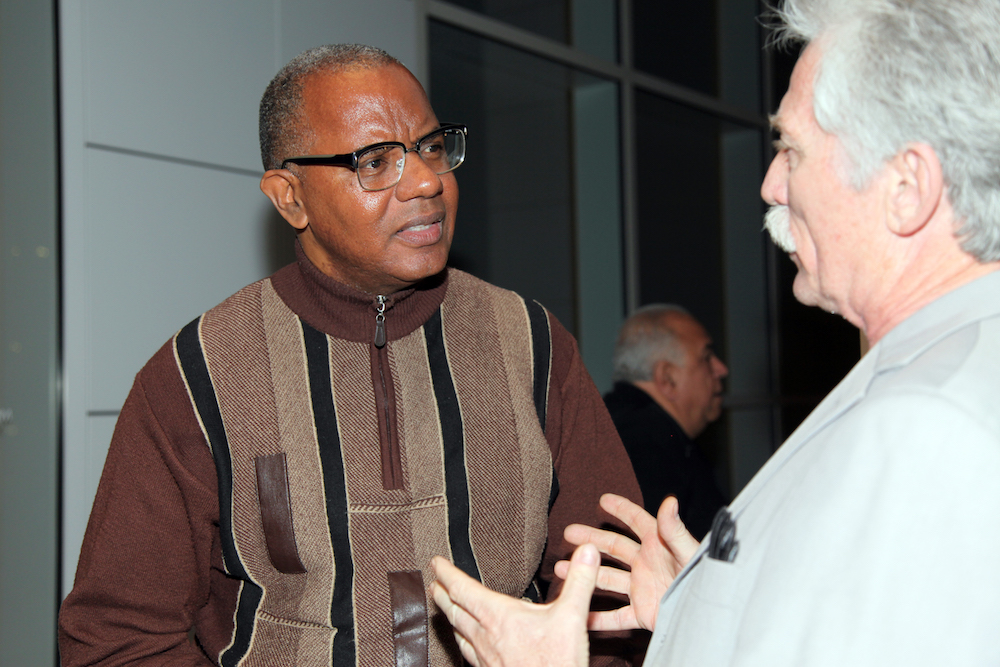 Photographer and documentarian Jamel Shabazz talks with guests at the reception.