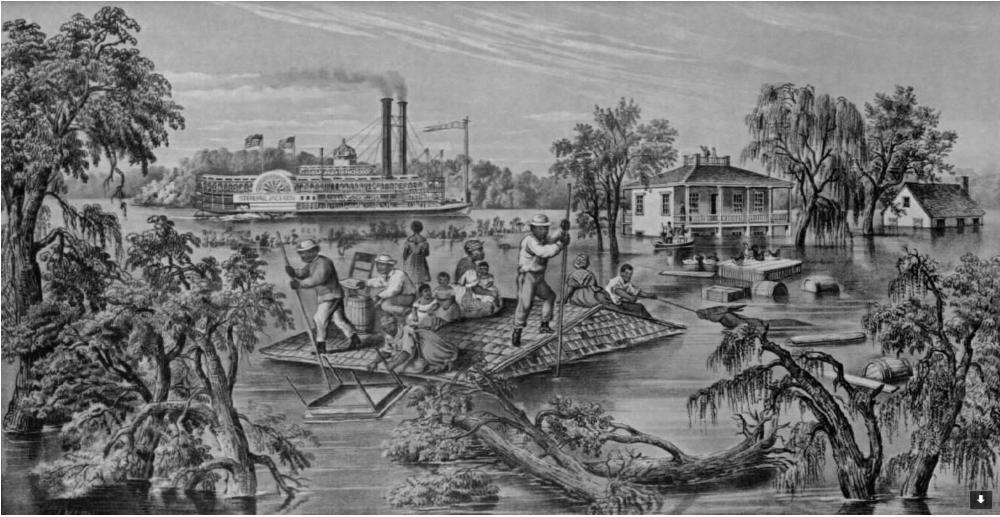 Even images depicting floods and other disasters tended to romanticize the South, as in this lithograph by Frances F. Palmer, "High Water in the Mississippi," published in 1868 by Currier & Ives, and reprinted in The New York Times, May 1, 1927, when a major flood devastated the area.

On May 1, 1927, The New York Times announced: “Once more war is on between the mighty old dragon that is the Mississippi River and his ancient enemy, man.” Illustrating the story was a reprint of an 1868 Currier & Ives lithograph called “High Water in the Mississippi,” to which had been added the phrase, “In Days Gone By.”

Through the curtain-like trees, the 1927 viewer—perhaps a Manhattanite drinking her Sunday morning coffee—peeped at a gallant steamboat, a columned Great House, and a close-up scene of rural black people caught in a picturesque predicament of floating roofs and tugging mules; she saw, even as she looked at an image of catastrophe, a tableau bedecked in plantation nostalgia. To think of the South from the distance of Manhattan was somehow to think back—back to 1868, back to a storied river battle in 1863, or maybe all the way back to an “ancient” time when chivalrous men tilted at dragons. It was hard for Northerners to imagine the South as modern.

It was harder still for Northerners to see the news of 1927—the most destructive river flood in U.S. history—as an industrial disaster partly of their own making. After extreme weather swept from the plains states to the Ohio River valley in fall 1926, levees began bursting in the Lower Mississippi Valley in March of ’27 and kept breaking through May. In all, water covered 27,000 square miles, land in seven states where about a million people lived; 13 major crevasses occurred; roughly 637,000 people became homeless, approximately 555,000 of whom were racial or ethnic minorities; somewhere between 250 and 1,000 people died; and financially, direct property losses totaled $250 to 500 million, while indirect losses brought that figure up to $1 billion. Floodwaters did not fully drain until the end of the summer.

The flood’s most dramatic moment occurred on April 29, when authorities—hoping to protect New Orleans—dynamited the levee 13 miles below the Crescent City at Caernarvon in order to flood the relatively less populated Acadian region of St. Bernard and Plaquemines parishes. The black-and-white photograph of the blast, with earthworks catapulted skyward, look like a scene from the Great War in Europe.

This slow, months-long disaster occurred in an era of a fast new medium—radio—and became intensely consuming for Americans, who had never before experienced a virtual disaster in something close to real time. The media coverage gave citizens outside the flood zone, especially in the North and West, a great deal of time to think out loud about the distressed South. Inhabitants of the Delta in 1927—white planters, but even more so poor whites and African Americans—were imagined by the rest of the country to be historically retrograde, caught in “Lost Cause” nostalgia, outmoded Christian fundamentalism, or feudal social and labor relations. The Harlem Renaissance spokesman Alain Locke, for example, had in 1925 described the northward migration of southern blacks to be not only a geographical move from countryside to city, but also a temporal leap forward “from Medieval America to modern.”

Not only did the South seem perennially behind, but it seemed to need repeated fixing. This sense of the South-as-problem dated back (understandably) to the antebellum period, but it was especially alive in the Progressive Era, as Northerners turned their reformist eye southward, when the region became a laboratory for “readjustment” and “uplift.” By the 1920s, despite their homegrown attempts to remake themselves according to a Northern model, Southerners were feeling especially assailed by the rest of the nation for committing, in the words of Fred Hobson, “crimes against progress.” The South had come to be ridiculed as “a region of belts—the Bible Belt, Hookworm Belt, Malaria Belt, Chastity Belt.” When the flood became a national sensation then, it was no surprise that the Northern pundit H. L. Mencken—a committed critic of Dixie—imagined all Southerners to represent “a hostile tribe on our borders.” The South appeared to be doing what it always did: getting into a mess that required Northern know-how to solve. Southerners needed to be rescued from themselves once again.

While Northern pundits were reviving old ideas of Dixie, or mythical ideas of the Mississippi “dragon,” it was Southern journalists and writers … who recognized the forms of human miscalculation in evidence. “Progress” had not occurred in a manner that was sustainable or equitable across regions and races. The flood made that all too clear.

On May 20, just before the levee break at McCrea, Louisiana, 35,000 people fled from the fragile levee standing between them and the swollen Atchafalaya River—just as another type of flight, also historic, was underway. Early that morning, a young airmail pilot, Charles Lindbergh, took off from Roosevelt Field on Long Island and flew his single-seat, single-engine Spirit of St. Louis in a nonstop arc to Paris. Upon his landing, the world went completely mad with joy. Soon enough, ongoing news of the flood seemed almost an insult amid this brave new world of aeronautical daring. A June 15 editorial in The Nation admitted: “People can stand only so much calamity. After a while it begins to pall and finally it has no meaning whatever.” The editorial added: “We have had spectacular flights to think about.” Lindbergh’s flight stood for the exuberance of the modern world, for humanity’s transcendence of physical limitation. The flooded Delta stood for humankind’s ancient cowering before Nature.

There were many problems with the 1927 version of this abiding narrative of Northern progress and Southern regress. Southerners were the first to make those problems clear. Mississippi journalist Harris Dickson wrote in a nationally syndicated, 12-part series on the flood: “Glance at a map of Father’s vast watershed. Note that our lands lie in the mouth of an enormous funnel. Then remember that every creek and gutter from Western Pennsylvania to Wyoming empties its water into the top of that funnel.” He concluded: “Two-thirds of this Union combines its flood to drown us. So we do earnestly insist that those who dump water into the funnel should help to minimize its disastrous results.”

The popular entertainer Will Rogers, who raised more money than any other individual for flood victims, told the rest of the nation, in his newspaper column, about the Southern attitude: “The cry of the people down there is, ‘We don’t want relief and charity; we want protection.’”

Eventually, other papers and many environmentalists espoused the Southerners’ position: The Mississippi watershed was a continental feature requiring a coherent national strategy and, moreover, it was the human mismanagement of this watershed that caused the 1927 catastrophe. These commentators saw the flood as not merely the result of an engineering mistake in levee design but as the product of environmental practices in the upper part of the watershed: deforestation of the upper Midwest, mowing under of prairie grasses to the west, industrial growth of corn and wheat, and drainage of wetlands.

Without trees, grasses, deep roots, and wetlands, the denuded soil of the watershed could not do its ancient work of absorbing and stalling water after seasons of intense snow and rain. All the work of water management was meant to be accomplished by the towering levee system, one which had no outlets or spillways at the time. When a four-story-high levee burst, the river emptied itself upon southern land with the fierceness of Niagara Falls. Not only were levee structures a modern, industrial feature in the Delta, then, but the water draining so swiftly into the “funnel” was a byproduct of industrialized environmental development.

One might have expected Southern commentators, just two years after the Scopes Trial, to have hailed this disaster as an Act of God. To the contrary. While Northern pundits were reviving old ideas of Dixie, or mythical ideas of the Mississippi “dragon,” it was Southern journalists and writers—from Dickson to luminaries like William Faulkner and Richard Wright—who recognized the forms of human miscalculation in evidence. “Progress” had not occurred in a manner that was sustainable or equitable across regions and races. The flood made that all too clear.

The flood showed too that the U.S. had become one country connected by modernity and industry and an abiding faith in using technology to alter nature and climate. In 1927, Americans demonstrated a lack of preparation for the consequences of that faith—a deficiency that would become tragically apparent again, in the same part of the country, when Hurricane Katrina hit New Orleans in 2005.