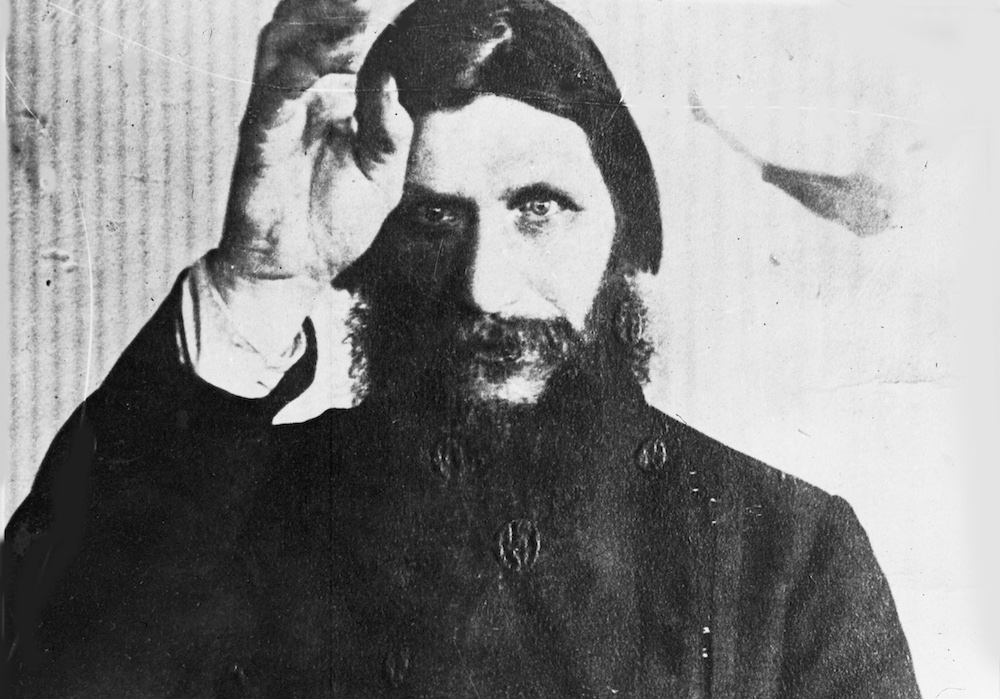 Bad influence? Undated photo of Rasputin, the self-styled monk who was killed in 1916 because of his mystic power over the Russian royal family. Photo by Associated Press.

Seconds rarely come first. If media coverage is a reliable indicator of public interest, however, seconds in command are currently top of the show, not the postscript but the story itself.

Those who advise, assist, check, and even, on occasion, usurp their leader have always captured our imagination: Octavian (who was to become the first Emperor of Rome as Caesar Augustus) had Gaius Maecenas, his admired ally, friend, and political advisor; King Louis XIII of France had Chief Minister Cardinal Richelieu who, in turn, had his own right hand man, Francois Leclerc du Tremblay (or Father Joseph Alexandre in Dumas’ The Three Musketeers), the original eminence grise.

The United States has spawned its (un)fair share of best supporting actors: William H. Seward, Lincoln’s rival turned “Indispensable Man”; formidable first ladies Eleanor Roosevelt, Edith Wilson, even the fictional Claire Underwood, each stepping up to fill a vacuum left by their hors de combat Presidents. Among a roll call of American Presidential consiglieri, credit for longevity goes to Dennis Ross, Middle East adviser to five Presidents; for ruthlessness to Karl Rove; and for a fondness for secrecy to Dick Cheney, whose defining role in national security and foreign policy once earned him one critic’s dubious description as “the real president of the United States.”

On the other side of the Atlantic, Peter Mandelson, Tony Blair’s Prince of Darkness and New Labour’s self-appointed Third Man, was admired and abhorred (often for the same cunning plan), though former Prime Minister Blair had more deputies who claimed to be his closest adviser than could fit in the Cabinet Office. Could Steve Bannon still prove to be political commentators’ pick for President Trump’s primus inter pares? Or, does his removal from the National Security Council’s cabinet-level “principals’ committee” suggest a room awaits him in a palatial Presidential dog house already boasting above-average occupancy?

Whatever we make of them, we like to know about our seconds precisely because they help to explain our firsts. As Niccolo Machiavelli said in his timeless guide to successful relationships between princes and their ministers, “The first method for estimating the intelligence of a ruler is to look at the men he has around him.”

From cool-headed, pure of motive confidants, to scheming fixers and cunning foxes, those leading from the shadows grip us because of, not in spite of, their complexity. They are riddled with paradox, one minute carrying the bags, the next carrying the can. That which makes them good makes them bad, and vice versa. And that which makes our leaders bad, we pray can be countered by their good counsellors.

From Veeps to First Violins, hatchet men to chairwomen, these seconds can be surprisingly useful to us: When leaders slip up, as inevitably they will, we have a readymade scapegoat—“I feel for her, she must have been really badly advised.” When we see a leader whose modus or motives we mistrust, we throw in for good measure equal contempt for their alter egos—“It takes one to know one.”

Folklore fans our suspicion. From Svengali to Severus Snape, literature is littered with shadow figures of questionable motives. The original Rasputin’s reputation for wielding extraordinary, even mystical, influence over his leader remains undimmed, at least beyond Russia. While his influence may have been exaggerated both in historical record and in popular culture, even those who have not heard Boney M’s lyrics or seen Fox’s Anastasia should be in no doubt that the former peasant’s presence in St. Petersburg played a significant part in the increasing unpopularity of Czar Nicholas II and his wife, Czarina Alexandra. Whether or not Rasputin was in part responsible for the downfall of the Russian monarchy, the petty criminal turned royal adviser from Pokrovskoye stole a place in the history books.

These pretenders to the throne have a lot to answer for when it comes to the presumption that all advisers are dark arts practitioners.

Nefarious deputies, from Iago to Macbeth, are not just the stuff of folklore and fiction. Life in business, politics, sports, and the arts, is sprinkled liberally with fake twos, seconds-in-command who reveal they are wannabe leaders—firsts-in-waiting, if you will. To these disgruntled schemers, treachery seems never more than a chink of an opportunity away. For evidence, look no further than former London Mayor, now British Foreign Secretary, Boris Johnson’s unashamed Brexit vote volte face in pursuit of the Conservative Party leadership. His was treachery of Shakespearean proportions, “vaulting ambition that o’erleaps itself.”

These pretenders to the throne have a lot to answer for when it comes to the presumption that all advisers are dark arts practitioners. Fake twos are outliers, in my view, and do a disservice to those who serve as diligent seconds. A minority may covet the throne, but most are happier to hide behind it, whispering into the ear of the King or Queen. Of course, we need to distinguish between operating from the shadows fruitfully and from the darkness deviously, but legitimate, albeit cunning, counsellors, like Thomas Cromwell, at least in Hilary Mantel’s magnificent reading of him, know that invisibility increases utility. Staying out of shot—happily and skillfully—is one prerequisite for being an effective and trusted adviser. We would do well to keep them out of the news. Deprived of the shadows in which to do their business, they will be less effective.

If we find it difficult to be certain about our First Ministers’ motives, we struggle, too, to be definitive about their contribution to the leadership. For some, Henry Kissinger will never be more than the self-serving malevolent force behind the secret bombing of Cambodia, who used his superior intellect to manipulate his man. For others, he remains the master diplomat who, despite a career enduring his President’s mistrust, movingly invoked at Nixon’s funeral Hamlet’s observation about his father, the late King: “He was a man, take him for all in all, I shall not look upon his like again.” All in all, we are left to question whether Kissinger was Darth Vader-like, an irrepressible force that drew Richard Nixon to his darkest side, or more of a sense maker helping to shape and secure his President’s legacy, loyal to a fault.

In navigating Britain to a safe harbor after the country’s decision to leave the European Union, one hopes Theresa May feels able to take counsel from those in her circle of consiglieri without second guessing what we think of them. If she feels most at ease sharing with her husband exactly how she is feeling about the negotiations, what and who are giving her pause for thought or most cause for concern, step forward Philip May. Former President of the Soviet Union Mikhail Gorbachev had no problem sharing his innermost thoughts on matters of state with his wife Raisa. Famously, NBC News reporter Tom Brokaw asked Gorbachev whether in the evening he went home and discussed with his wife national politics, and political difficulties. Mr. Gorbachev replied that they discussed everything. Mr. Brokaw had a follow up question, ”Including Soviet affairs at the highest level?” to which Mr. Gorbachev responded, ”I think I have answered your question in toto. We discuss everything.”

Even if we could decide, the relationships that exist in the corridors of power are as diverse and complicated as their inhabitants. Take Choi Soon-sil, friend for around 40 years to recently impeached and now arrested South Korean former President Park Geun-hye, who has been charged with collusion, allegedly helping Ms. Park to extract money from businesses including Samsung. Her greater villainy in the eyes of some of her accusers is the unprecedented access she secured to Ms. Park and her extensive influence over matters of state from North Korean policymaking to the nomination of top officials to helping, if not writing, the President’s key speeches. Even if acquitted, she will be found guilty in the court of public opinion, on an additional charge: proximity to power to the chief occupant of Seoul’s Blue House. “Third Obama” Valerie Jarrett enjoyed similar access in Washington’s White House. When New York Times reporter Robert Draper asked President Obama if he ran every decision past Ms. Jarrett, the president answered immediately: “Yep. Absolutely.”

Is it wise to deny our lonely top dogs the support and candor of a true friend? Franklin D. Roosevelt’s first friend and fixer Harry Hopkins attracted the deep envy of others seeking the President’s ear. Defending his decision to invite Hopkins to live in the White House, Roosevelt suggested that almost everyone who walked through his Oval office wanted something out of him. Not so Hopkins, whose only request was to be of service to him, according to his biographer David Roll.

Should we limit Ivanka Trump’s ability to moderate the wilder ideas of the Oval Office’s current occupant, or might it be wise to give the president’s daughter unencumbered access and free rein to rein him in? “Where I disagree with my father,” she told CBS News anchor Gayle King, “he knows it and I express myself with total candor.” Even China’s all powerful President Xi Jinping has created an inner circle of former colleagues and friends, those whom he believes best understand his personality and preferences. Total candor is a currency to be coveted.

Are we being candid or are we trying to have it both ways? Volatility fuels our own sense of vulnerability so, in times of uncertainty and chaos, we seek saviors to steer us out of trouble. Small wonder that our leaders sometimes take on cult-like status or bloated self-importance. Yet we set impossibly high expectations of our leaders because, rationally, we know they cannot possibly rescue us single-handedly. How disingenuous of us, when we choose to subject those holding primary power to more rigorous scrutiny, to declare our disappointment with their lack of competence and credibility.

We should expect and demand of our leaders’ behavior that is consistent and predictable over time, and when we witness behavior that is predictably inconsistent our anxiety is compounded and our concerns justified. Leaders show weakness when they centralize power, shoot from the hip, choose to fly solo. That is when we look to those in the leader’s inner circle to anchor him, shielding him—and us—from the worst version of himself.

Machiavelli had it right. We should judge our leaders on the counsellors they elect to have around them. If we become as fearful of our seconds as we are distrustful of our firsts, we should take responsibility when our leaders fail us. Confidants, counsellors, and consiglieri, whether spouses, friends, former rivals, or deputies, are back in vogue for good reason. They have the courage to speak truth to power, the ability to enlighten their leaders, and to play to their leaders’ strengths whilst insuring us against their limitations. We need our seconds more than ever.

“The only way I can express my gratitude to Your Majesty is to shed my blood for Your glory,” Potemkin wrote to Catherine the Great. Most seconds may not wish to spill blood for their bosses, but the majority are driven, selflessly, to lead them as close to glory as they deserve, and sometimes to glory that they do not.