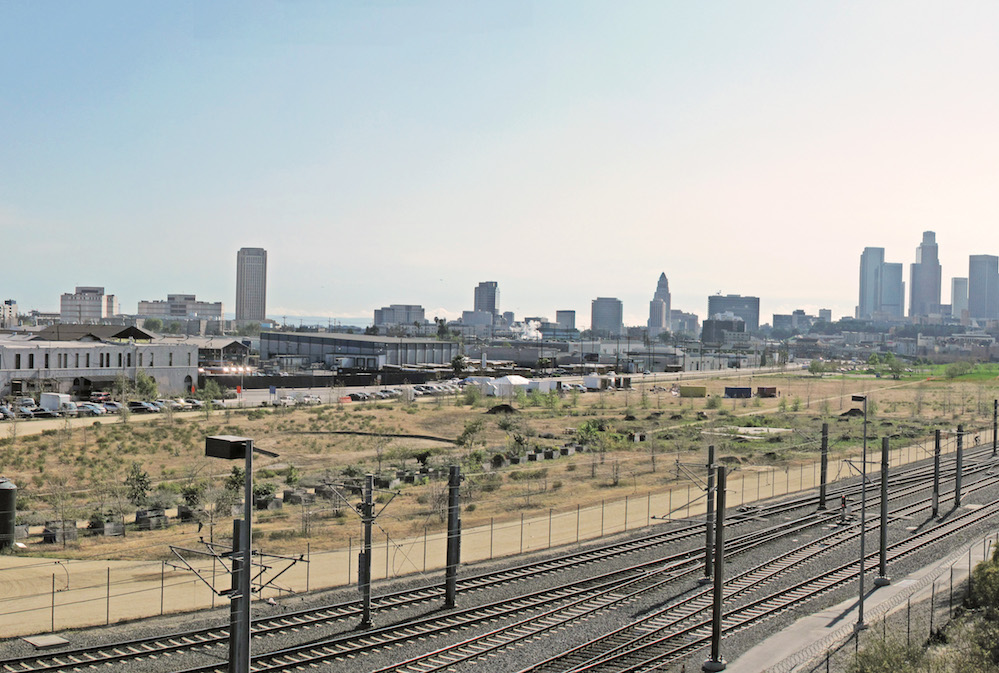 A 2012 partial panorama of the site of the future new Los Angeles State Historic Park, which opened this year. Image courtesy of Wikimedia Commons.

Riddle: When is a miracle also bound to be a disappointment?

Answer: When the miracle is a project of the state of California.

A case in point is the recent opening of the Los Angeles State Historic Park, an event that contains many miracles.

Miracle one: It’s a large (32 acres) park—with broad grassy fields large enough to fly a kite or hold a big concert, buildings with community meeting space, and a signature bridge with selfie-ready views of the downtown skyline—in the densely crowded center of park-poor Los Angeles. Miracle two: It was built on a historic rail and industrial site that required costly soil decontamination and was originally planned for business redevelopment, before the intervention of the state saved it for parkland.

Miracle three: The state’s woefully underfunded parks department built this park with public funds. Miracle four: The park didn’t die during a 16-year odyssey that coincided with a crippling recession, multiple budget crises, and an accounting scandal inside the parks department.

So why do all these miracles add up to disappointment? Because, for all its wonders, the Los Angeles State Historic Park still lacks many elements of a great park.

Just getting the park opened in the face of obstacles required many compromises, not the least of which was a reduced $18 million price tag for a park that was once planned as a $55 million facility. In a state where it’s so hard to do anything impactful, doing something truly world-class is next to impossible.

The story of the park mixes the above miracles with missed opportunities. The park represented, in the words of one state press release, a “once-in-a-century” opportunity for California. The state park could reshape a transit-connected parcel that extends from Metro rail’s Chinatown station to the Los Angeles River.

The park still may achieve that kind of status (more on that later). But the park that opened this spring, with a big ceremony that included Gov. Jerry Brown, is missing very basic things.

The park represented, in the words of one state press release, a “once-in-a-century” opportunity for California. It still may achieve that kind of status. … But the park that opened this spring is missing very basic things.

In a warming city, there are no shade structures, and small, newly planted trees provide little relief from the blistering sun. Many of the features of the original plan for the park, first advanced a decade ago, haven’t materialized. The park’s current configuration contains none of the elaborate gardens or fountains (a victim of the drought) or railroad-influenced design elements that were part of earlier plans. There isn’t a children’s playground. And the park, which is supposed to be a community asset, is open for limited hours—8 a.m. to sunset—and is cut off by fencing and the Gold Line trains from the two thoroughfares it borders, Broadway and Spring Street.

My first visit, with my three young (and quickly bored) sons, left me angry. Here again was the California disease: We dream big, but our ambitions aren’t matched by dollars or management follow-through. If this park—with so many champions, from high state officials to local activists—can’t be better, what hope is there for the many plans around California to create new and dynamic public spaces?

This is not merely about a state government with a dysfunctional budget system, and byzantine planning and regulatory processes. Rich folks in New York ponied up millions in donations to make the High Line (a $152 million project) brilliant. Chicago and its philanthropists devoted $475 million to Millennium Park, which is of a similar size to the L.A. State Historic Park. Why haven’t our rich people and corporate interests stepped up and done something grand here?

The answer to that is a very long story about a lack of cohesion, generosity, and imagination. (I still carry a torch for architect Thom Mayne’s 2006 idea for the park property: Move Dodger Stadium to the park space, and instead create an even grander park where the stadium now sits, paid for by selling some development rights.) Instead, the state parks department—with a budget under so much stress that it nearly had to close dozens of state parks in recent years—had to perform a cut-rate miracle. Couldn’t billionaire Eli Broad have sold off a few pieces of his art collection to add more to this park?

Despite such frustrations, let’s stay positive. What’s not done is not done. And the good news is that there’s still time and opportunity to make the experience of this park truly great.

Already, developers are starting to transform the industrial space around the park into resident-friendly locations. There’s a brand new nonprofit friends group that should support the park. An in-park restaurant and a new water wheel project from artist Lauren Bon and the Annenberg Foundation are on their way. There’s plenty of space to add a children’s playground, shade structures, and a bridge over the Metro Gold Line tracks to connect the park with people who live along the Broadway corridor. Perhaps hours could be extended to something that matches the life of the neighborhood—6 a.m. to 10 p.m.

“Now that the park is open, you have the canvas from which to create the future,” says the tireless Sean Woods, superintendent for the Los Angeles sector of California State Parks, who has been working on the park since its 2001 beginnings.

All that will require is more money—and the miracle of Californians taking full advantage of an opportunity to do something great. Until that happens, enjoy the park, but bring lots of sunscreen.