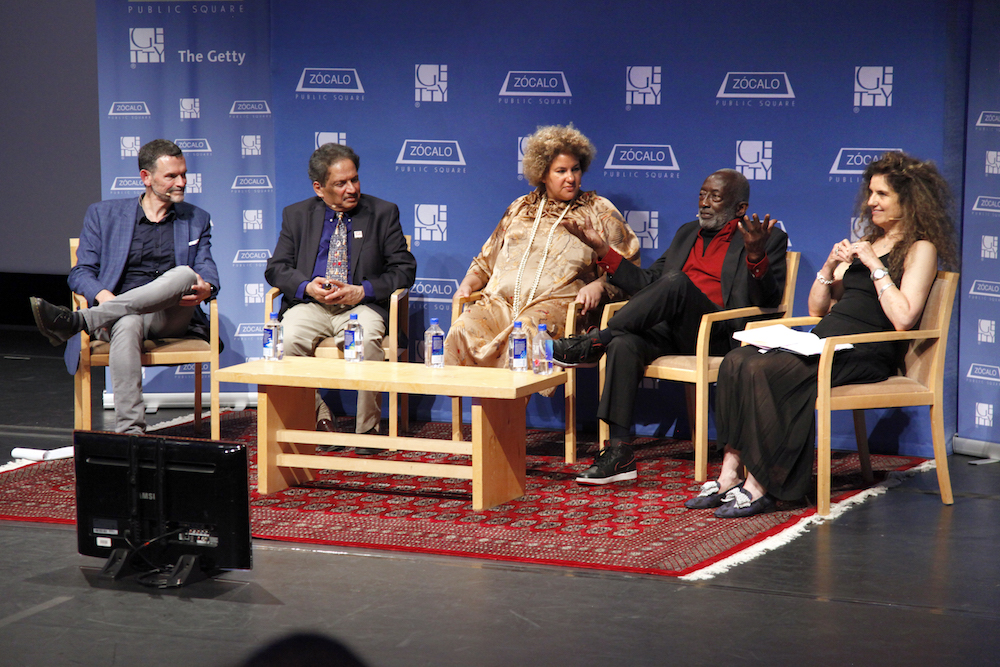 The color is associated with introversion and introspection, but it’s also associated with the expansiveness and openness of oceans and skies. It’s a sacred color in the world’s religions, but blue movies are obscene movies. And while the color can represent life in many ways, it’s also true that “when we die, we turn blue,” said art historian Carol Mavor. Blue, she added, “does seem to depend on a sense of paradox.”

The color and all its permutations were the subject of a Zócalo/Getty “Open Art” event before a large and appreciative audience Thursday night at the Getty Center. On an auditorium stage bathed in blue light, in front of blue backdrop in a blue state, a blues quartet of a panel—a chemist, an art historian, a photographer and researcher of West Africa, and a comedian-musician-playwright—offered very different reflections on blue in an awe-inspiring array of contexts.

The conversation started with a look at the blues of the Morpho butterfly and the Giotto frescos in the 14th-century Arena Chapel in Italy, and covered bluestockings, blue bloods, blues music, blue-collar workers, blue eyes, the civil-rights era film A Patch of Blue (about a blind white girl who befriends Sidney Poitier), the iris in Vincent Van Gogh’s work, and the magic of that little blue pill, Viagra.

Oregon State chemist Mas Subramanian talked about his accidental discovery of a new shade of blue, “YInMn blue,” during work to create compounds that might improve the memory of computers. He said that is typical—blue is an unpredictable color, even a deceptive one.

“Nature plays tricks on us—many things that we think are blue are not really blue,” he said. “Living organisms are not very good at making blue.” The sky, for example, is not really blue. But, he added, deep bodies of water are actually blue, in that they absorb reds (which have longer wavelengths), leaving blues, which have shorter wavelengths.

[Garrett Morris] described how his grandfather, a Baptist preacher, introduced him to the blues when he was a young child in New Orleans, “even though he shouldn’t have” since the blues were considered evil and dirty.

Another panelist, Catherine McKinley, author of Indigo: In Search of the Color that Seduced the World, spoke of the value, financial and spiritual, of blue cloth—specifically indigo products—in west Africa, where she traveled along traditional indigo trade routes in 11 countries. In the 1800s, lengths of blue cloth were exchanged as part of the trans-Atlantic slave trade. In some contexts, a human being could be traded for two yards of cloth. During the American Civil War, the U.S. dollar became so devalued that trade was conducted in indigo cakes.

McKinley said that across different cultural contexts, there is often a connection of blue to life and death. “Blue as cool,” she explained, “representing a kind of spirituality, exemplified by a coolness.”

Panelist Garrett Morris, an original Saturday Night Live cast member who has worked as a musician, actor, and playwright, pointed out that blue is not just a color. “Blue is also something you can feel,” he said. He described how his grandfather, a Baptist preacher, introduced him to the blues when he was a young child in New Orleans, “even though he shouldn’t have” since the blues were considered evil and dirty.

Morris, who also has owned a comedy and blues club in Los Angeles, said he loved the “elusiveness” of the blues. “It’s not sad or happy. There’s a bittersweetness about the blues. It’s more sentimentality, melancholia, which can be good or bad … It doesn’t have to be definite.”

As the event went on, the panelists—and several audience members—exchanged a river’s full of facts and questions about the color blue.

Did you know that Facebook is blue because Mark Zuckerberg is colorblind, and blue is the only color he sees well? Did you know that the Hindu god Vishnu is blue, and associated with life and death and rejuvenation? Subramanian noted how Indians became excited about perceived connections between the blue characters in the James Cameron film Avatar and aspects of Hindu religion and culture.

Morris pondered, “When was the first time someone said, ‘I feel blue.’ Why didn’t they say, ‘I feel green.’” (Other panelists suggested that the body can turn blue when it is hurt or ill). And a retired swimming pool contractor in the audience described how much work goes into making sure that when water fills a pool, it looks blue.

In response to an audience member’s question about how blue tastes, the art historian Mavor, who is the author of Blue Mythologies: Reflections on a Colour, discussed a blue mushroom, the indigo milk cap, that bleeds a delicious milk. But she noted that many blue tastes are artificial—like blue jello—and desired by children. 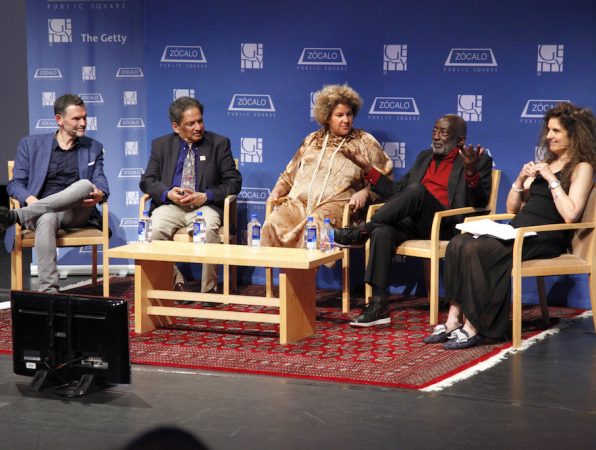 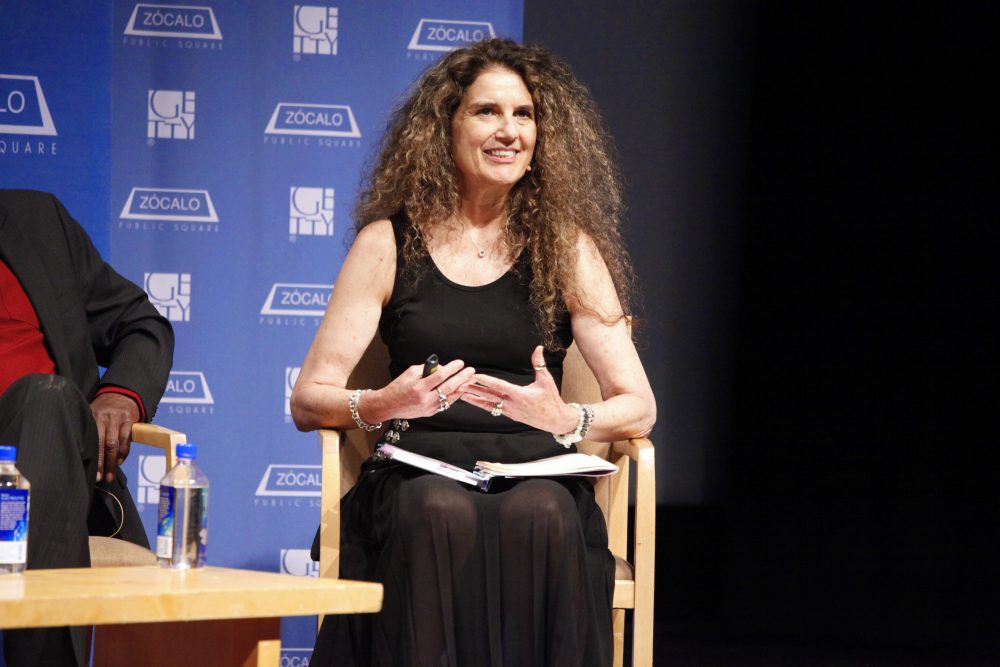 Carol Maver, art historian and author of Blue Mythologies: Reflections on a Colour. 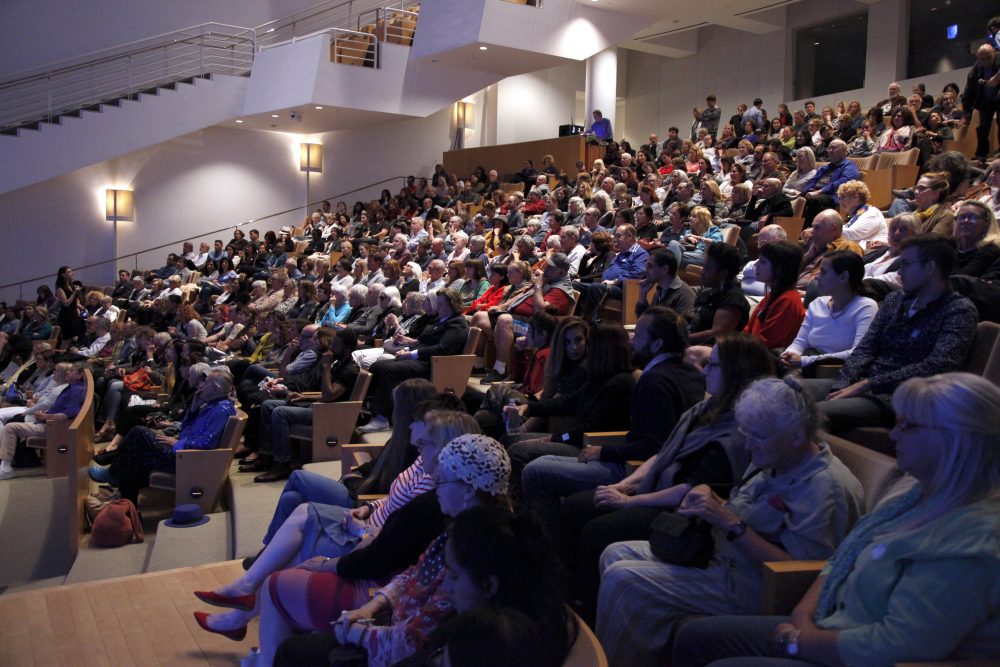 A full crowd at the Getty. 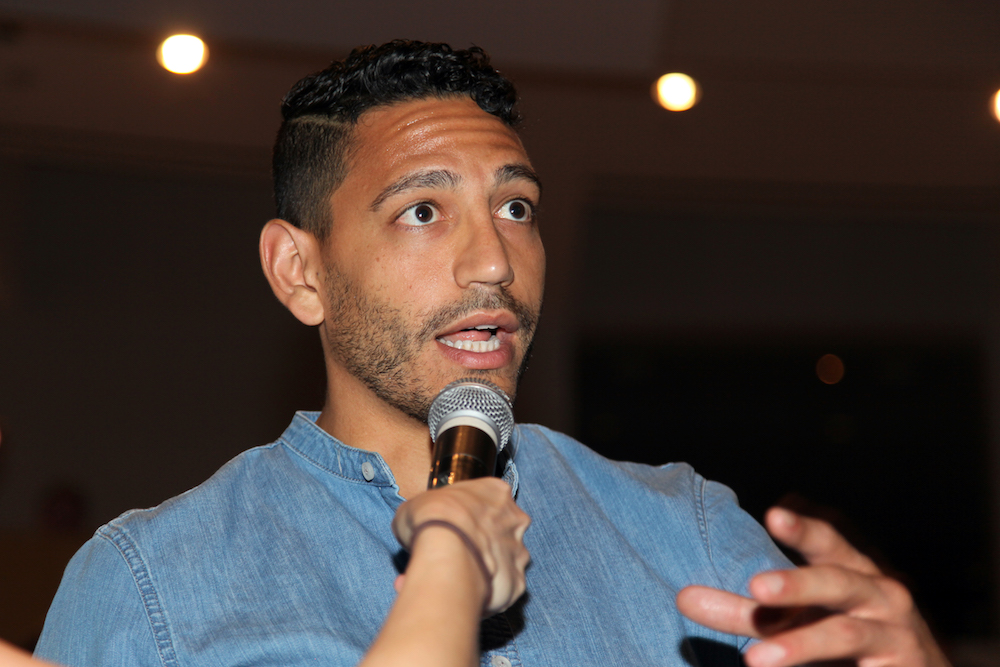 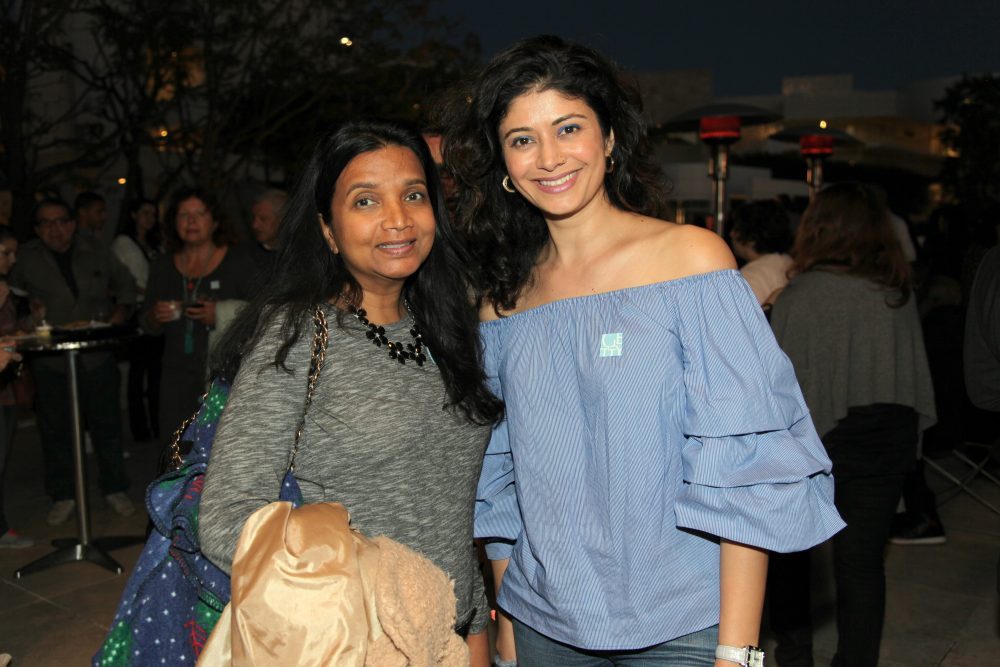 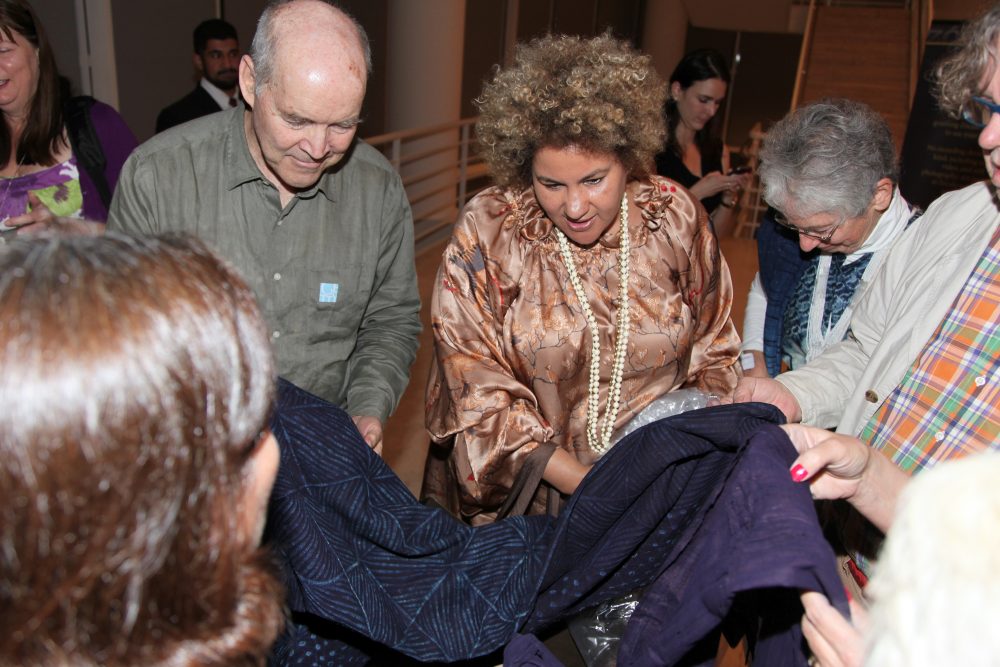 Catherine E. McKinley, author of Indigo: In Search of the Color that Seduced the World, speaks with guests at the reception.