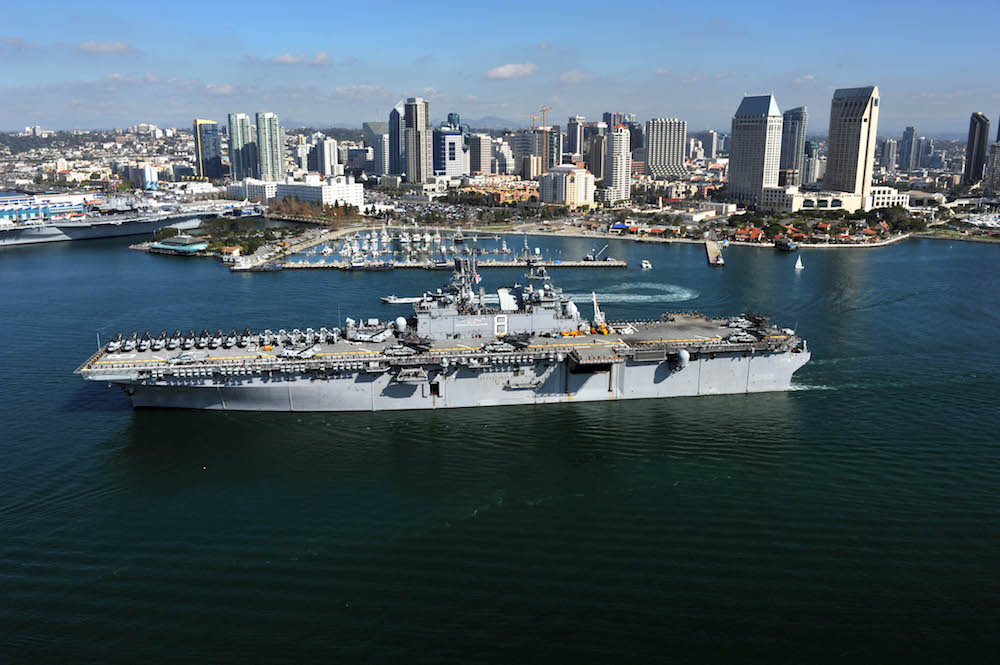 San Diego, shown here, “practices an open and engaged brand of Americanness that doesn’t mesh well with Trumpian isolationism and ignorance. The population of active military and veterans leavens its patriotism with hard-won wisdom about the world.” Image courtesy of Rally Point.

If you wish to inspect the front lines of the conflict between Donald Trump and California, head for San Diego.

Yes, it’s true that the Golden State’s fight against the president has so far taken place in the courts and in cyberspace. And, sure, challenging The Donald’s legitimacy is not a mere local pastime but an all-consuming statewide prizefight. But as a matter of geography, culture and economy, the California-Trump War feels more intimate, higher-stakes and potentially destabilizing in greater San Diego.

Embodying the conflict was the recent spectacle of nine-term Republican Congressman Darrell Issa, perched on the roof of his office building in San Diego County, peering down on angry constituents protesting outside. Protestors claimed that Issa, who has tied himself in knots with both pro- and anti-Trump comments, was hiding from them; he said he was taking photos. The vulnerability of Issa, a pugnacious Republican who was entrenched in his district before Trump’s political rise, is just one small sign of how the president’s weird gravity has shaken the region.

What makes Trump’s wild swings land as punches in San Diego? Because the city is more deeply tied to the United States than California’s other big regions. Los Angeles and the Bay Area, global mega-regions, define themselves in opposition to national norms. But San Diego is unapologetically American—“America’s Finest City” being its most durable slogan. And since San Diego is the nation’s biggest border city and home to one of the world’s heaviest concentrations of military power, many San Diegans represent America not just as civic commitment but as professional duty.

But San Diego practices an open and engaged brand of Americanness that doesn’t mesh well with Trumpian isolationism and ignorance. The population of active military and veterans leavens its patriotism with hard-won wisdom about the world. And San Diego, its businesses, and governments have built ever-closer ties to Mexico, encouraging cross-border commuting, considering a binational Olympic bid, and even constructing an airport terminal spanning the border to Tijuana’s Rodriguez International Airport.

And so Trump’s obsession with border security and walls is a threat to San Diego’s daily routine, and aspirations. The president’s increased deportations have inspired widespread fear in communities here, and his rhetoric against cities that don’t use police to enforce immigration laws (San Diego among them) has inspired a poisonous backlash against federal law enforcement. One result could be the unwinding of collaborations between local and federal authorities that are vital to policing this border city.

Further inflaming tensions, the Trump Administration has made San Diego the host of the contest to design the president’s promised border wall. Sometime this month, contestant firms are expected to build samples of their border wall designs in the Otay Mesa neighborhood, likely drawing protests and creating security headaches for the region.

Los Angeles and the Bay Area, global mega-regions, define themselves in opposition to national norms. But San Diego is unapologetically American—“America’s Finest City” being its most durable slogan.

Trump’s bigoted smear of refugees as security threats doesn’t go down well in San Diego, which has an especially strong infrastructure of organizations and institutions that support them. San Diego County has long led California in the number of refugees it takes in. The county has accepted some 15,000 Iraqi refugees since 2009, and has taken in roughly half of all the Syrian refugees who have settled in California.

In San Diego, Trump poses a direct challenge to the economy: Canceling a major new Pacific trade agreement, and threatening to pull out of NAFTA, were not friendly to local exports and importers. And Trump’s stubborn attempts to restrict travel from certain countries are seen as a clear and present danger to San Diego’s massive tourism industry, which attracts more than 34 million visitors a year to everything from the Comic-Con International convention to America’s best zoo.

Trump’s campaign against environmental regulation, and health funding and science funding, isn’t helpful to the area’s many research institutions, top health care providers, and life science companies.  The Scripps Institution of Oceanography is a pioneer in climate science, which Trump has called a hoax. (It was no accident that downtown San Diego saw crowds north of 15,000 people for this spring’s March for Science.)

The litigious Trump should stay out of San Diego courts. He made few friends in the region’s legal community last year with his racist attacks on a Federal District Court Judge Gonzalo Curiel, a San Diegan who is a highly-respected member of the legal community there, for decisions in litigation against Trump University.

For all of Trump’s provocations, opposing a president doesn’t come all that naturally to San Diego, a military town full of service personnel and veterans accustomed to saluting the flag and their superior officers. Trump also has nodded in San Diego’s direction by proposing big increases in defense spending that could be a boon to the military and the area’s many defense-related businesses.

And San Diego’s middle-of-the-road politics—the county’s voters are closely split between Democrats and Republicans—makes dealing with Trump trickier than it is in California’s other, monolithically Democratic coastal cities.

Trump poses a particular quandary for San Diego’s popular mayor, Kevin Faulconer, a Republican who is considered a possible contender for governor next year. Faulconer is not a Trump supporter, in word or deed—he backs comprehensive immigration reform, speaks Spanish, promotes cross-border trade, and touts his city’s Climate Action Plan. But his ambitions will require him to win the support of the small but powerful Republican base of voters who still mostly support Trump. Faulconer and other local Republicans have had to walk a fine line between respecting a president of their party and criticizing Trump’s many affronts to decency and common sense.

The California-Trump war is still young. It’s possible that the president and his self-destructive tendencies will make it easier for San Diego to unite and oppose him with full force. But if the president hangs in and gains traction on his border, immigration, trade, and budget policies, while delivering more money to the region’s defense industry, then steel yourself, San Diego, for very bitter fights in your very beautiful city.