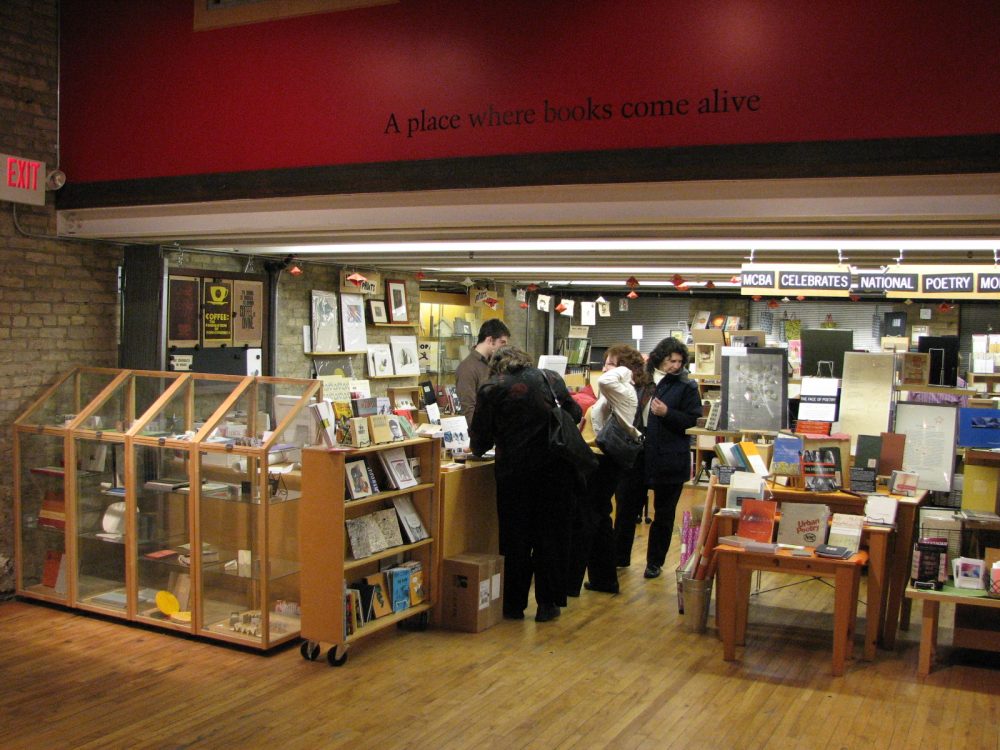 When it comes to music or theater, community-building happens right in front of your eyes. Crowds surge forward to see a band, or settle together into rows of seats as the lights go down and the curtain comes up. What does community look like, though, in the literary world? The logo for the Kindle app says it all about the classic image of a reader: a lone figure sitting under a tree.

It’s possible, though, to create a physical space that brings writers and readers together to share the transformative power of storytelling. That can look like a library—or it can look like Open Book, with its theater-style marquee beckoning Minneapolis denizens from all walks of life to come in and explore the world of words.

1011 South Washington Avenue is a prominent part of the hottest corner of downtown Minneapolis, with high-rises containing condos offering a view over Gold Medal Park to the historic Stone Arch Bridge crossing the Mississippi River. It took vision, though, to imagine a scenario like this when Open Book opened in 2000. “The neighborhood was empty,” says Britt Udesen, now the executive director of the Loft Literary Center. “Unless you wanted to go to Liquor Depot, there was nothing here.”

Open Book is a hub of the Twin Cities’ literary life and an inviting space for literary projects. The facility is a path-breaking collaboration among three nonprofit organizations: the publisher Milkweed Editions, the education-oriented Loft Literary Center, and the Minnesota Center for Book Arts (MCBA).

It took all three organizations, with the help of some heavy lifting from civic leaders and varied donors, to create Open Book: a space that supports the local and national literary communities, making the three more than the sum of their parts.

Beyond Open Book’s inviting entrance, a high-ceilinged space with exposed brick walls and wood beams features a coffee shop and a Milkweed-run bookstore, as well as the entrance to MCBA’s gallery space and gift shop. A staircase offers access to a second-floor space with classrooms, public gathering space, and offices. Even more spaces are on a third floor.

“We get people stopping in because of the space or to shop downstairs, and then realizing that this could be a place where there’s more than a shopping experience for them,” says Udesen. “We have tens of thousands of visitors over the course of a year that we wouldn’t get if we weren’t on a busy street in a busy neighborhood.”

Open Book is a destination for book lovers who come in from as far as the outer suburbs, from greater Minnesota, or even from across the country to meet authors at the Loft or browse Milkweed’s selection of nationally-praised publications. It’s also, though, a center for its neighborhood community. It’s a polling place, it hosts theatrical productions, and neighbors come from areas like the nearby Cedar-Riverside community—home to many Somali immigrants—to join book clubs or take classes.

Open Book is … a center for its neighborhood community. It’s a polling place, it hosts theatrical productions, and neighbors come from areas like the nearby Cedar-Riverside community—home to many Somali immigrants—to join book clubs or take classes.

Nearly 20 years ago the three founding partners got together and made the case that securing a center for the literary arts was an investment that would pay off. Together, the partners raised $8 million to buy three standalone buildings that were then unused, and undertook to turn them into what became Open Book. “There are only so many towns where you could raise that kind of money for a literary center,” observes Slager.

Open Book offers its tenants not only visibility and community, but also a measure of protection from the vagaries of the commercial real estate market. “One of the ideas behind creating Open Book,” says Slager, “was to create a situation where each of the founding partner organizations had below-market rent in perpetuity. That also applies to our bookstore space: it would be challenging for us to afford that kind of storefront space in our part of town.”

The stability of Open Book derives in part from its collaborative organizational model: the facility operates as an independent nonprofit, with board representation from all three of the founding partners. The organization has a single employee: a general manager for the facility. Open Book rents the building’s additional space to outside companies wanting to office there. “We work together and support each other’s work—that feels unbelievably nurturing and supportive,” says Udesen, adding, “I would never fib and say that collaboration is easy. Don’t underestimate how much time, intention, and goodwill collaboration requires—but once you figure it out, it’s pretty magical. All three of us are doing incredible programs, but they’re even better because of where we are.”

There have been some setbacks along the way. When Open Book first opened, it featured a 3,000-foot retail space operated by Ruminator Books—a bookstore, across the river in St. Paul, that was a beloved institution. Sales at the Open Book space were disappointing, though, and the cost of that failed venture sped the demise of not only the Minneapolis store, but Ruminator’s original St. Paul bookstore as well. Last year, Milkweed decided the time was right to open a bookstore in the Open Book space again—albeit on a smaller scale this time. Sales over the winter were slow, says Slager, but they’re starting to pick up.

Open Book is a case study in the power of space: The inviting facility is a gathering place and an inspiration for the literary community. It’s also a testament to the benefits of collaboration, and to the wisdom of investing in real estate when it remains affordable.

“The establishment of the building contributed significantly to the longevity and the vitality of three great nonprofit organizations,” says Slager. “It’s become a gathering spot and a true community center.”

“This building feels like it is a proper home for literature,” says Udesen. “It’s not fancy, but it is beautiful. It is exciting to be in, and it feels like the kind of place that storytelling deserves.”